What is the HP Omen X?

Outlandish gaming systems usually come from boutique manufacturers rather than global brands like HP, so I was surprised when the Omen X turned up. And then my surprise turned to shock when I heaved this beast from its box.

The Omen X is a galvanised steel cube that sits diagonally on two small, sturdy legs. It weighs a whopping 28kg, it’s 504mm wide, and it costs £2,500. It’s an absolute beast. But it represents really, really poor value.

The Omen X doesn’t just attract attention because of its huge size and unusual structure. Its front panel is divided into quarters that are ringed with lights, and the bottom panel is augmented with the striking Omen gaming logo.

That bottom panel also lifts away to reveal a couple of tools for tinkering and a load of spare screws, and the lighting is customisable: it can be set to any colour, or even to respond to CPU and GPU temperatures.

The right-hand side of the system has the power button, a row of ports and four sturdy, tool-free hard-disk bays that handle 3.5-inch and 2.5-inch drives, while the left-hand panel lifts away for component access. At the back, there are ports, and the PSU in its own module. 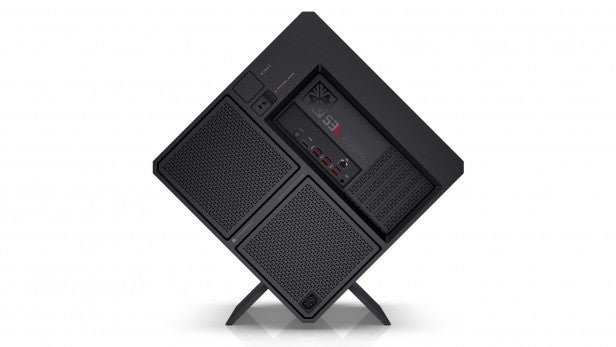 The left-hand panel and part of the roof can be removed with the press of one button. It’s easy to get inside, and HP says that the Omen X’s angled design makes it simpler to get at the components. I completely agree. With the motherboard, graphics card and memory all pointing upwards, it makes tinkering far easier. Problem is, you’re not really allowed to tinker unless you want to void the warranty. More on that later.

The interior is dominated by the wide graphics card and the CPU liquid-cooling unit, which has two 120mm fans and bright red coolant pipes. It looks fine at first glance, but it’s not impressive: the motherboard is plain, with no decoration, and the cabling is poor – a load of spare wires are messily bundled on the right-hand side of the interior, despite HP’s boasts that the power-supply cavity at the back of the machine is also designed to hold spare cables.

There’s disappointment elsewhere once you get beyond the Omen X’s gregarious exterior. This 28kg machine is 504mm wide, which makes it far heavier and about twice as wide as most tower machines. 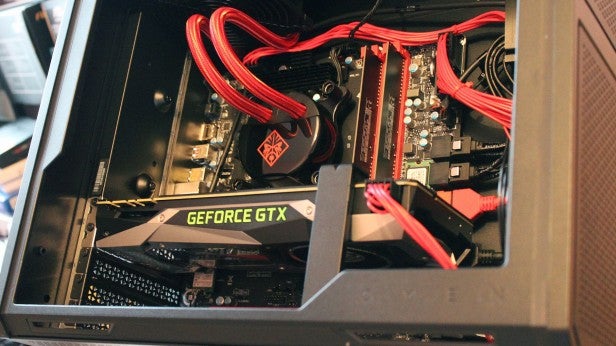 Despite the huge size, the Omen X only has a microATX motherboard. That means there’s less upgrade room than in most tower machines with ATX boards – two memory slots, a single PCI-Express socket and a few SATA ports are free, but that’s it. The port selection is similarly meagre: there are plenty of USB 3 ports, but only single audio and S/PDIF outputs, and no USB 3.1, PS/2 or anything else.

Sadly, though, potential upgrades are almost a moot point on this machine. HP’s website boasts of this machine’s compatibility with third-party components, but adding anything extra to this machine voids the Omen’s warranty.

Of course, specialist PC builders won’t support third-party components that are added by users, but those firms do support the system’s original components – adding something new won’t entirely void the deal. Those machines have longer warranties, too: the Omen X is covered for a year, but UK companies offer deals in excess of three years.

This monster PC is underpinned by a set of familiar gaming components. The GeForce GTX 1080 is Nvidia’s current flagship, and it uses the Pascal architecture to deliver a huge performance boost while cutting down on power consumption when compared to previous generations.

However, I’m disappointed that the GTX 1080 isn’t overclocked and it’s instead a cheaper, dull Founders Edition card rather than a third-party component. The GTX 1080 has huge headroom, and the vast majority of third-party cards arrive with an on-board overclock. Don’t think about heading into software to overclock the card, either – tweaking the components voids the warranty.

I have the same issue with the Core i7-6700K. It’s an excellent quad-core, Hyper-Threaded chip that runs at 4GHz with a Turbo Boost peak of 4.2GHz, but it’s unusual to see it running at its stock speed in a high-end gaming PC – almost every British-made gaming rig will tweak the chip. It’s not possible to apply your own overclock, either, as doing that voids the warranty – and the basic BIOS doesn’t have any overclocking options. 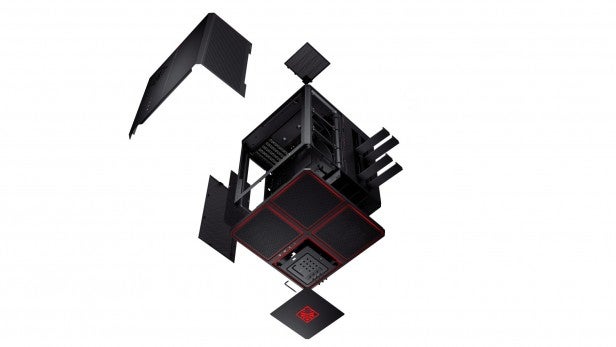 There’s 16GB of DDR4 memory, which is enough, but it runs at 2,133MHz. That’s the bare minimum when it comes to speed, and the motherboard doesn’t offer much room for improvement: it can handle 32GB of 2,133MHz memory. That’s half the capacity and a much lower speed than even the most affordable gaming motherboard – and, as a final insult, the PC is supplied with 2,400MHz memory that can’t even run at its stated speed.

The motherboard is missing features elsewhere, like on-board buttons and POST displays, overclocking utilities and many of the ports, headers and connectors that are included with a standard high-end gaming PC.

There are no surprises in the storage array. The 256GB Samsung SM951 M.2 SSD is fine, and there’s a 2TB hard disk.

The final disappointment comes from the power supply. The 600W unit has enough power, but it’s an OEM model that doesn’t appear to have any 80PLUS efficiency designation. That’s something that comes as standard on other expensive gaming PCs.

The Overclockers Titan Gladius, which is our most recent gaming PC review, goes further in several departments. It has two overclocked GTX 1070 cards, an overclocked Core i7-7700K processor from the newer Intel Kaby Lake range, a 512GB SSD, faster memory and a PSU with 80PLUS certification.

The Overclockers machine delivers this kind of specification for £2,410 – a little less than the HP. The Omen X offers poor value elsewhere, too – gaming systems from firms like Overclockers, Chillblast and Scan with a Core i7 processor and a GTX 1080 graphics card generally cost around £2,000 and will outstrip the HP in terms of speed, features and warranty coverage.