The i7-7700K is the most powerful processor of Intel’s new “Kaby Lake” generation of desktop processors. A direct successor to the Skylake 6700K, this new model benefits from higher clock speeds, improved graphics performance and a slightly more efficient architecture.

This chip is for those looking to perform challenging tasks on their PCs, including batch photo editing, video editing and 3D work. It will work best in conjunction with a dedicated GPU for ultimate performance.

The seventh generation of Intel Core chips should offer a minor improvement on the sixth-generation processors. There have been no wholesale changes in terms of physical design; the chip has been produced using largely the same 14nm (nanometre) fabrication process as the fifth- (Broadwell) and sixth-generation (Skylake) chips.

In simple terms, the smaller the process, the more efficient and therefore powerful a processor can be. Intel calls the process used on Kaby Lake chips “14nm+”, with each individual transistor benefiting from a taller, thinner design for increased efficiency. 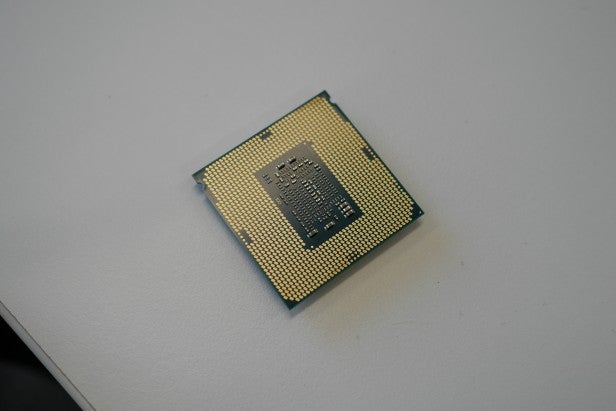 With the i7-7700K, we can measure how much of an improvement Intel has made with Kaby Lake: it’s the most powerful chip on the market with all the features you’d expect of a desktop processor.

Those looking for a significant speed boost will be disappointed, however, and anybody running a sixth-generation i7-6700K will have few reasons to upgrade. Those running third- or fourth-generation Core i7 chips will see a decent increase in performance, though.

For more information on Kaby Lake, including a full list of Kaby Lake processors for both laptops and desktops, read our Kaby Lake explainer.

So what’s new? At its most basic, this chip has a higher base clock speed thanks to the efficiency gains made possible by the Kaby Lake architecture. Where the 6700K had a base clock speed of 4GHz, the 7700K manages 4.2GHz.

In addition, the maximum Turbo Boost clock speed – which dictates how fast any given core can go – has been increased to 4.5GHz from 4.2GHz in the old model. That’s a decent jump in performance for a processor that has the same 91W TDP (thermal design power) as its predecessor.

On-board graphics performance has been improved as well, with Intel HD Graphics 630 replacing the 530 from last year. As you’ll see from my benchmarks, though, this is no speed demon.

Video: What’s the difference between Intel Core i3, i5 and i7?

If you’re upgrading your desktop from a sixth-generation Intel Core processor, your current motherboard should be able to accommodate a seventh-gen chip. This will almost certainly require a BIOS update, so you should check your motherboard manufacturer’s website to see whether compatible firmware has been released. Asus released Kaby Lake-compatible firmware for our Z170-Deluxe motherboard in December.

If you’re starting afresh, you can now pick from a new array of motherboards that includes the Z270 chipset. This new chipset is similar to the Z170, with extra PCI-E lanes to improve performance on systems with high-performance storage and graphics hardware.

Kaby Lake also supports Intel Optane, which offers a way to speed up performance on the cheap. It supports low-capacity, high-performance SSDs to boost the performance of slow hard disks.

Intel has also improved overclocking, both in terms of performance and stability. This should make it far easier to push big speed boosts without spending time obsessing over voltages.

You get the same quad-core architecture with Hyper-Threading, allowing for more efficient multi-tasking and performance-heavy tasks such as 3D and video rendering.

Next
Performance, gaming and overclocking Review