The HP EliteBook 745 G5 comes with all the trimmings you'd expect from a modern business laptop, but if its overt focus on security above all else means it makes a few too many compromises for more casual, personal use.

HP’s EliteBook range of laptops are aimed at demanding executives and on-the-go workers and as such come with a full suite of business features to keep you connected and wherever you may roam. The EliteBook 745 G5 is suited to anyone working in a more sensitive sector, where privacy and security are major factors – this notebook will keep your private bits well and truly private, for peace of mind.

The EliteBook 745 G5 can be picked up in several different SKUs, depending on your personal needs. Our review sample was the 3UP37EA model, which is placed around the middle of the range in terms of price and features. 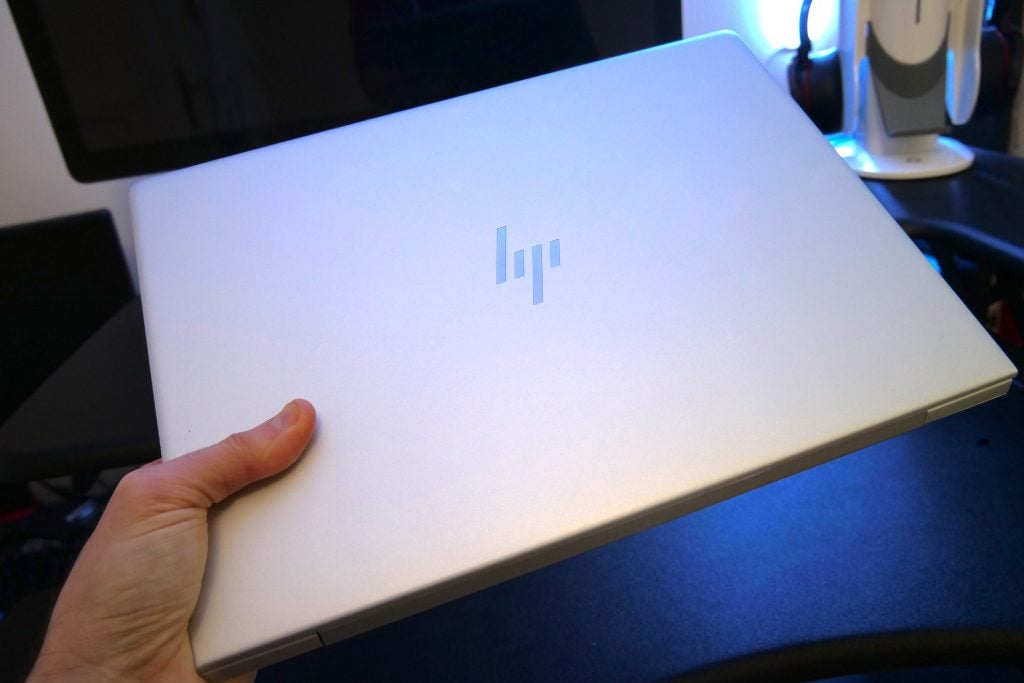 As the EliteBook 745 G5 weighs under 2kg, you can easily hold the thing in one hand.

HP says that the EliteBook 745 G5 laptop has an ‘ultra-slim design,’ and it certainly is pretty skinny. The 18mm-thin build may not be quite as slender as the LG Gram 15 and, but that means it’s thinner than something like the Asus ZenBook 15.

The 14-inch display is also surrounded by quite chunky bezels, especially above and below, which threatens to push the device into 15.6-inch laptop dimensions. That said, at 1.5kg, the EliteBook 745 G5 is slim and light enough to slip into a backpack and carry around with you all day.

The case is made from aluminium, which features a simple-if-unexciting finish, complete with the minimalist ‘four slashes’ HP logo. While the EliteBook 745 G5 is not a toughened, ruggedised laptop, I couldn’t find any weak spots after much poking and prodding. Every facet of the EliteBook feels nice and solid. I got the impression that if I were to take this on the road with me every day, it would survive most kinds of punishment. The design is very straight-laced, but that’s typical of a business laptop.

Although you only get a single Type-C USB port (which doesn’t support Thunderbolt) this can be used for both data transfer and charging the laptop. In addition the EliteBook sports two Type-A USB  3.1 connections, split between the two sides, plus an Ethernet and HDMI port.

More unusually, there’s a Smart Card reader for dual factor authentication – just one of quite a few security features built into the EliteBook 745. And you also have a SIM card slot, to stay connected even when there’s no decent Wi-Fi to be found.

Above the display there’s an HD webcam. Rounding out HP’s privacy enhancing credentials is a sliding privacy cover, to block the camera lens when not in use. No need to reach for the masking tape, then. In terms of image quality, the webcam is pretty basic – I looked like a grainy shadow indoors, and shockingly blanched outside. Still, there’s a secondary IR webcam which is used for face recognition when signing into Windows, and this worked a charm, even when I tested it out in the dark. 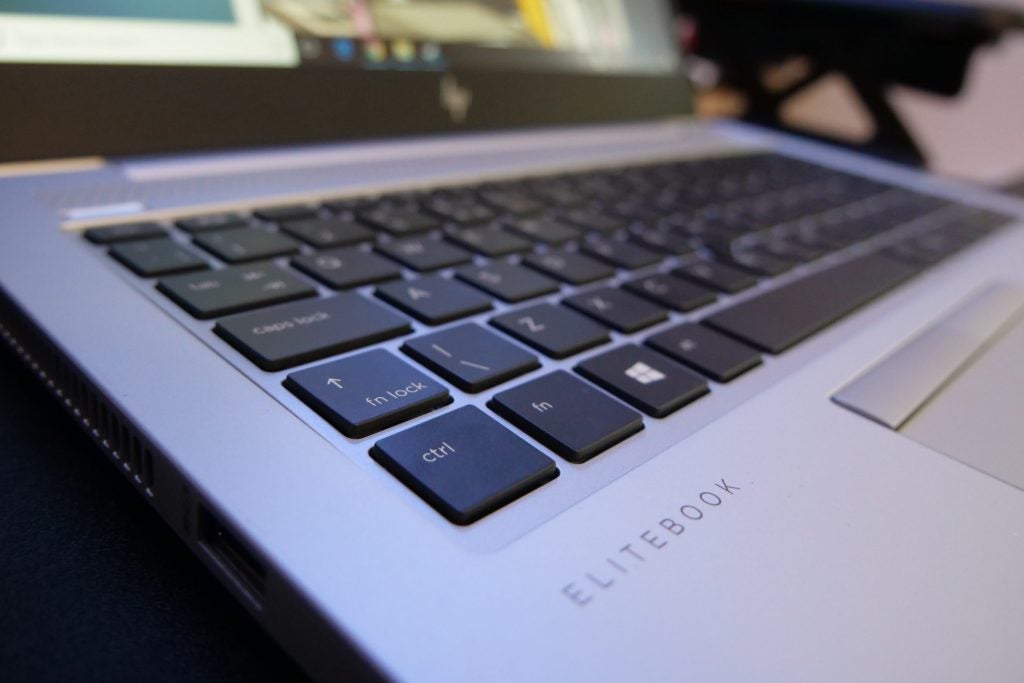 Low travel and smart spacing means you can comfortably hammer away at your work on the HP EliteBook 745 G5.

One good thing about those sizeable dimensions is the amount of space afforded to the EliteBook’s keyboard. This stretches close to the left and right edges, so those isolated keys have plenty of room to breathe.

Almost immediately I reached my top typing speed, and found that I could comfortably type on the board for hours at a time. The keyboard is a little spongy towards the centre, but that didn’t massively hamper the typing action. The low travel distance worked nicely, too. My only complaint is the extra row of buttons slapped over on the right edge, which push the return and backspace keys inwards. I found that I was forever hitting the Home and Page Up/Page Down keys by mistake, and eventually had to look down every time I wanted to delete some text or end a paragraph.

You have the option of full backlighting (with high, medium and off settings), so you can continue to beaver away when going through train tunnels, or working late at night. And the board is apparently spill resistant too, although we didn’t test this by pouring anything into it – just in case.

In the centre of the board you’ll find a pointing stick/keyboard nipple, something that’s still fairly common on business laptops. This can be used as an alternative to the touchpad, for anything which requires a little more precision. The touchpad itself is actually okay thankfully, proving quite responsive to any swipes and multi-touch gestures using two or more fingers. You even get dedicated mouse buttons housed above the pad, although I found myself ignoring these and simply clicking the bottom corners of the touchpad instead.

HP’s security theme continues with the addition of a fingerprint sensor, housed beneath the keyboard on the right side of the chassis. If you have the EliteBook’s camera covered up or your facial apparel has it fooled, this scanner can be used to unlock your laptop instead. It seems to work every time, providing your finger isn’t moist or grubby. However, I’d have preferred a sensor actually built into the power button (like on the Huawei Matebook X Pro), for convenience. 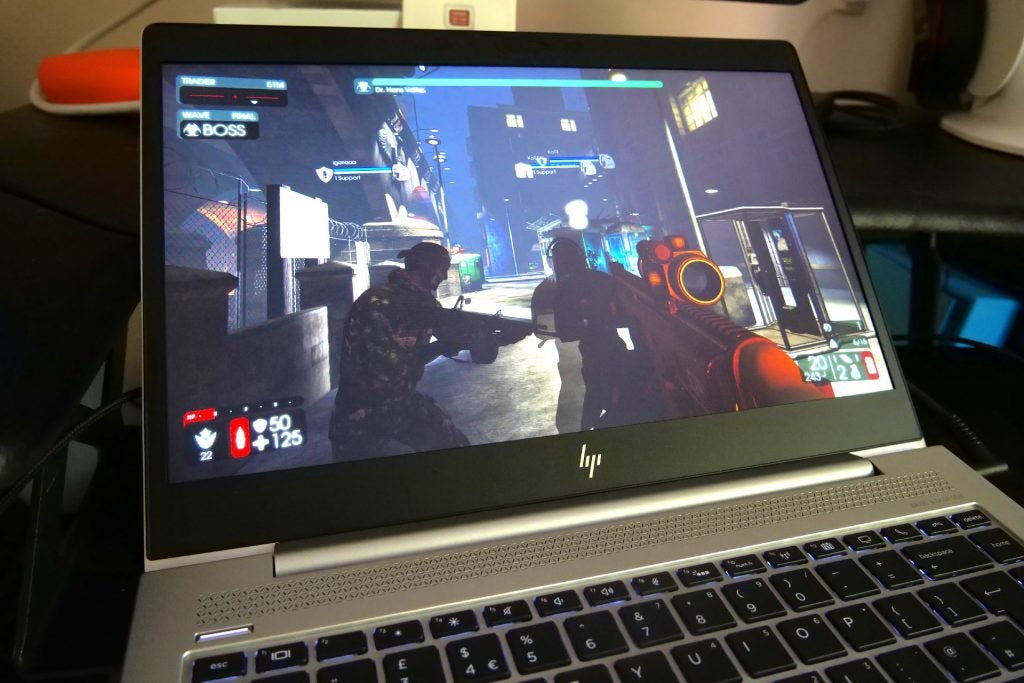 The 745 G5 doesn’t buck the EliteBook trend of having strong anti-glare coatings which, while great for privacy, hamper gaming.

If you need something for creative and office tasks, HP’s 14-inch IPS display is up to the job. The Full HD resolution produces quite crisp visuals, while colour accuracy is very respectable too. Almost the complete sRGB gamut is covered (our tests reported 99% coverage overall), while 78% of Adobe RGB is also accounted for. Colour temperature hovers around the ideal mark of 6500K on most brightness levels, rising only once you hit 80% brightness and above.

Unfortunately, lighting is a major issue. On top brightness, the EliteBook 745 G5 doesn’t quite hit 200 nits, which is sub par, and literally pales in comparison to the HP EliteBook 1050 G1, which gives out an excellent peak brightness of over 600 nits.

I had no issues with visibility when working indoors, in ambient lighting. As soon as I tried moving outdoors however, I immediately gave up. Even with the anti-glare finish, I struggled to see anything that was going on. This low brightness also results in a less-than-stellar contrast ratio, reported at just 710:1 in my tests.

For the audio, this HP laptop packs in dual stereo speakers with some Bang & Olufsen branding. Sound is fired out of the slender grille which stretches across the EliteBook, just above the keyboard. In terms of volume it’s fine, although high end noises sound tinny and distorted at full volume. I also had no issues with the built-in mic when chatting online. This picked up my voice clearly and cleanly, even in fairly noisy environments.

Windows 10 Home is the OS of choice and this ran well on the EliteBook, even with a heap of HP’s own apps and software slapped on top. Many of these apps, such as JumpStart, are the usual fluffy nonsense that we’d rather do without. However, those security conscious users will appreciate HP’s Sure Start feature. This forces a password entry before Windows is even loaded, on top of the usual Microsoft account security.

Our review model came with AMD’s Ryzen 7 Pro 2700U chipset running the show, the most premium processor on offer with the 745. If your budget is a bit tighter, you can opt for the less powerful Ryzen 3 Pro 2300U or 5 Pro 2500U platform instead.

In our benchmark tests, the EliteBook didn’t surprise. It’s not as strong as some rivals such as the LG gram and Dell’s XPS 15, but beats off competition from the Lenovo IdeaPad 720s.

While this isn’t a gaming laptop (and what I said about the screen bears repeating) I ran a series of 3DMark tests to give you an idea of how well suited the EliteBook 745 G5 is for light gaming.

It’s an OK result, which in the real world means that you’ll be able to just about play the likes of Fortnite, PUBG – but don’t expect miracles here.

The AMD setup uses integrated Radeon Vega graphics, which is fine for photo editing and office tasks. It actually does a decent job with some older games too – we managed to get Killing Floor 2 running with a smooth frame rate at low detail settings. However, a laptop with dedicated graphics will provide stronger performance. 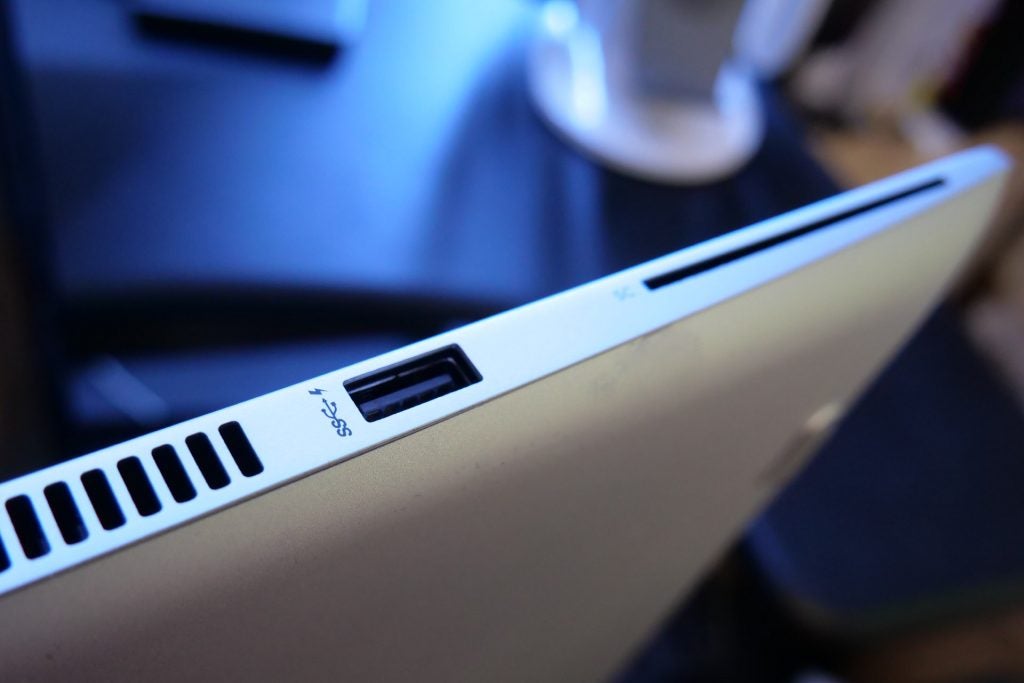 Sadly the EliteBook won’t exactly keep you going for a full working day if you’re not plugged in. In our standard benchmark battery test, which involves looping video and web browsing until the laptop finally dies, the EliteBook managed to survive for seven and a half hours.

However, if you’re working in the Chrome browser and downloading files in the background, this drops dramatically to just over three hours of use. Make sure you pack the charger when you’re out and about.

HP has pretty much nailed the security aspects of the EliteBook 745, with features such as the smart card reader, Sure Start, fingerprint sensor and facial recognition. Usability and portability also get a thumbs up, even if this 14-inch laptop is closer in size to some 15.6-inch devices.

However, more demanding users who want to edit video or play recent games will want to hunt down a laptop with dedicated graphics. Meanwhile the EliteBook’s limited battery life and that dim display mean you’re best off using this notebook indoors, with the charger firmly connected.

The EliteBook 745 G5 has plenty to offer business users with strict demands on security and privacy, although it struggles in other areas against rivals.