The LG gram is a solid choice for mobile professionals always on the move.

I’ve seen some impressively slim and light laptops lately, including the Huawei MateBook X Pro, Acer’s Swift series, and the Asus ZenBook 13. Now LG is charging into the fray with its own LG gram 15Z980 notebook, which boasts a seriously lightweight chassis despite its 15.6-inch size.

Don’t expect compromise when it comes to the specs or build quality, either. This device is tougher than a tank, while packing some premium components to boot. Can it do enough to steal your attention from the competition, though?

At a shade over 1kg, this is one of the more featherweight 15.6-inch laptops I’ve had the pleasure of slapping onto my thighs. LG’s boast that you can comfortably carry the gram between two fingers is no lie. Although, admittedly, I wouldn’t do so for an extended period of time. 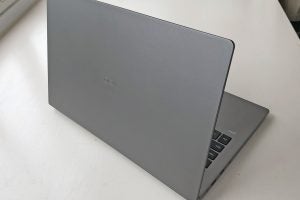 That metal chassis is seriously slim, although not quite as slender as Acer’s Swift laptops. It’s also quite wide, so bear that in mind if you want to slip it into a compact backpack or bag. Thankfully, the display sports quite narrow surrounding bezels, so that keeps the laptop from growing well out of proportion.

With the LG gram being slim and light, you might expect it to be a fragile, precious machine. You’d be wrong – this is one tough device, having passed seven of the MIL-STD 810G military standard tests.

It’s shock-resistant, dust-resistant and it can even withstand some quite extreme temperatures: bung it in a freezer or leave it out in the burning midday sun – the LG gram will survive the experience.

The lid can deal with a fair bit of pressure, flexing without putting strain on the display contained within. I couldn’t find any weak spots, even though there appears to be a sizeable seam on the lip of the laptop. 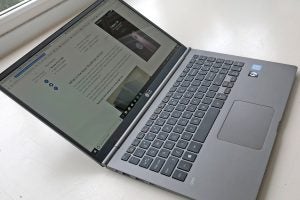 It’s light and it’s tough, and the LG gram is also a sexy beast. The simple yet satisfying design reeks of Apple MacBook of course, although LG has thrown in plenty of its own aesthetic flourishes. From the funky font used on the keyboard to the neat screen hinge, there’s enough here to differentiate from similar devices.

The slender edges sport a respectable number of ports, too. You get three full-sized USB 3.0 connections, plus a Type-C USB for fast data transfer. There’s an HDMI port and a microSD card reader, providing plenty of options for hooking up to peripherals and managing your data. 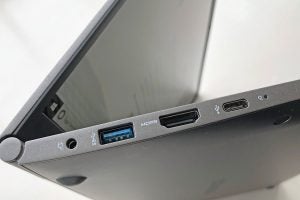 That well-sized chassis affords the LG gram plenty of space for its chiclet keyboard. Even though it doesn’t quite stretch to the edges, the board is well-sized and comfortable to use. You even get a dedicated numeric pad, which is handy when tax return time comes around.

As is the case with the MateBook X Pro, the Enter key is unfortunately squished into just a single row. Hence, I found myself constantly peppering my articles with hash symbols instead of splitting paragraphs. Still, I did grow accustomed to the layout over time. And thanks to the respectable travel distance and solid construction, I found that I reached my optimum typing speed in no time at all. 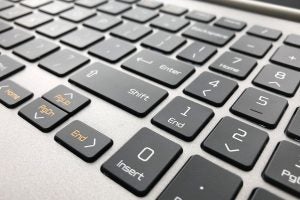 The board is backlit, with two degrees of lighting to choose between. Combined with the super-bright display, you’ll have no problem seeing what you’re doing, whatever the environmental conditions.

You’ll also find a fingerprint sensor built into the power button, up at the top-right corner. This is tiny and yet still perfectly accurate, proving a serious timesaver when you’re unlocking the LG gram several times a day.

Housed in the very centre of the palm-rest is a surprisingly small touchpad. This could have been much larger since there’s plenty of surrounding space, although it’s also perfectly sensitive to your swipes and gestures. Best of all, clicking the corners to simulate a mouse click doesn’t send the cursor jerking madly across your desktops.

In further good news, the 15.6-inch display is also touch-responsive, so you can ditch the pad altogether and just poke the screen instead. 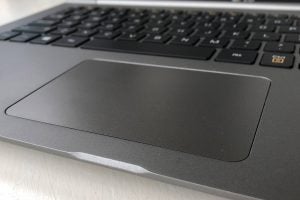 That 15.6-inch IPS panel is as strong as I’d hoped from LG, which obviously knows a thing or two about eye-pleasing visuals.

For a start, the Full HD resolution keeps everything pin-sharp. High-definition movies look great, photos are packed with intricate detail, and you’ll have no problem working on the most ridiculously complicated of spreadsheets.

On top brightness, visibility is never an issue. Even when working outdoors on a sunny day, I never found myself squinting or changing my view. The screen can tilt back to around 160 degrees to suit your working environment, while viewing angles are also strong. 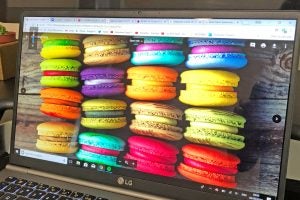 If you’re a photographer, videographer or any other creative type who demands accurate colour representation, the LG gram is certainly up to that task. An impressive 99% of the sRGB gamut is covered, so what you see is what you get. The display can also reproduce 78% of the Adobe RGB range.

Those chunky gaps either side of the keyboard are begging for some speakers, as seen in rivals such as the new MacBooks. However, LG has slapped the dual speakers on the base of the gram instead, much to my chagrin.

The good news is that these speakers are surprisingly powerful, to counter the fact that audio is somewhat muffled. Boost the volume and throw on a movie and you’ll hear every word clearly, even when you’re working in a noisy kitchen. I’d still recommend hooking up some proper speakers or ‘phones if you want to bop to some tunes, though, as the speaker quality is typically tinny. 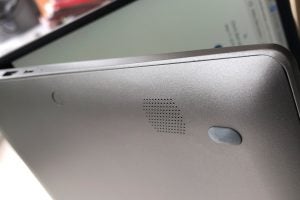 I’d be careful if you’re rebooting the laptop with headphones connected, however. A couple of times I did just that and was almost deafened by a hideous piercing shriek as Windows loaded up. Especially jarring when it happens at 1am.

Running the show is one of Intel’s Kaby Lake R chipsets, the Core i7-8550U. This is clocked at 1.8GHz, although it can also be boosted using the likes of Intel’s XTU.

Performance is certainly reliable enough for everyday tasks, even at that base clock level. A generous 16GB of DDR4 RAM helps to keep everything running smoothly, even when you have a half-dozen or more apps all active at once. I did see the occasional stutter, but thankfully this was quite rare.

The bottom of the LG gram gets a bit toasty towards the rear-end under stress testing, but not to a troublesome degree. Meanwhile, the cooling fans remain blissfully quiet, even when running at full pelt. 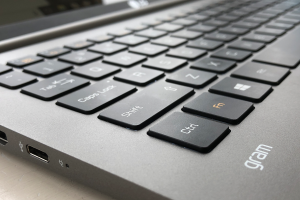 Like a bit of benchmarking? Have we got some lovely figures for you. Geekbench churned out a single-core score of 4687 and a multi-core score of 12,282, while PCMark spat out a final result of 3149. That’s a similar effort to Huawei’s MateBook X Pro, while the multi-core score smashed rivals such as the Asus VivoBook S410U (which uses the same chipset).

Of course, you can’t have absolutely everything without bumping up the asking price to astronomical regions. So while the LG gram is a solid performer for everyday tasks, it struggles with demanding media-editing software and gaming.

The integrated Intel UHD 620 graphics are fine for photo editing and simple video editing – and, indeed, you do get CyberLink’s PhotoDirector 8 and PowerDirector 14 installed as an added bonus. You can also play older or less demanding games without much stress. Just don’t expect to run Far Cry 5 with any kind of playable frame rate, or split-screening with 4K resolution video.

You get 1TB of storage for your apps and other bits, split into dual 512GB SSDs. The read/write speeds of these drives are a perfectly decent 549MB/sec and 448MB/sec respectively. 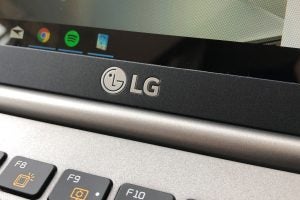 The LG gram is pleasingly portable as far as weight is concerned, but how about the battery life? After all, it’s no use taking the device out every day if it’s dead by lunchtime.

Thankfully, I was more than happy with the use I achieved from every charge. Even when multitasking non-stop with office apps, browsers and music-streaming software, I managed to get a full seven hours of play time before the laptop gave up. If you dial down the screen brightness and knock off the non-essential features, you’ll get even longer.

In the standard Trusted Reviews battery test (which involves looping video playback and web browsing until death), once again the LG gram impressed. I saw just over 12 hours of life from beginning to end, which beats most rivals hands-down – even those with big, fat batteries stuffed inside.

As a quite demanding mobile user, I’ve really enjoyed rocking the LG gram for the past few days. Although it isn’t the most compact of laptops, that lightweight chassis is comfortable to carry around in a decent-sized backpack. It’s reassuringly rugged, too, while I found little to fault as far as performance, battery life and the rest of the design were concerned.

The LG gram is a solid choice for mobile professionals always on the move.