This fitness-focused smartwatch will be a tempting prospect for amateur athletes, but it's probably not the right fit for convenience-hunting techies.

The Honor MagicWatch 2 is a smartwatch with a strong focus on fitness tracking, that’s very similar to the slightly pricier Huawei Watch GT 2.

It’s powered by the Kirin A1 chipset, runs on Lite OS software (Huawei’s own-brand interface for wearables), and is available in two sizes: 42mm and 46mm.

The good-looking design of the MagicWatch 2 takes style notes from a traditional timepiece, with its circular face and scaled tachymeter around the circumference. The 46mm version we reviewed was black, as was its plastic strap, with the only dash of colour being a small red stripe on one of the two crowns.

These physical buttons perform the task of bringing up options (the top one for the full menu, the bottom for a shortcut that’s preset by default to fitness activities), while all other functions are accessed by using the touchscreen. 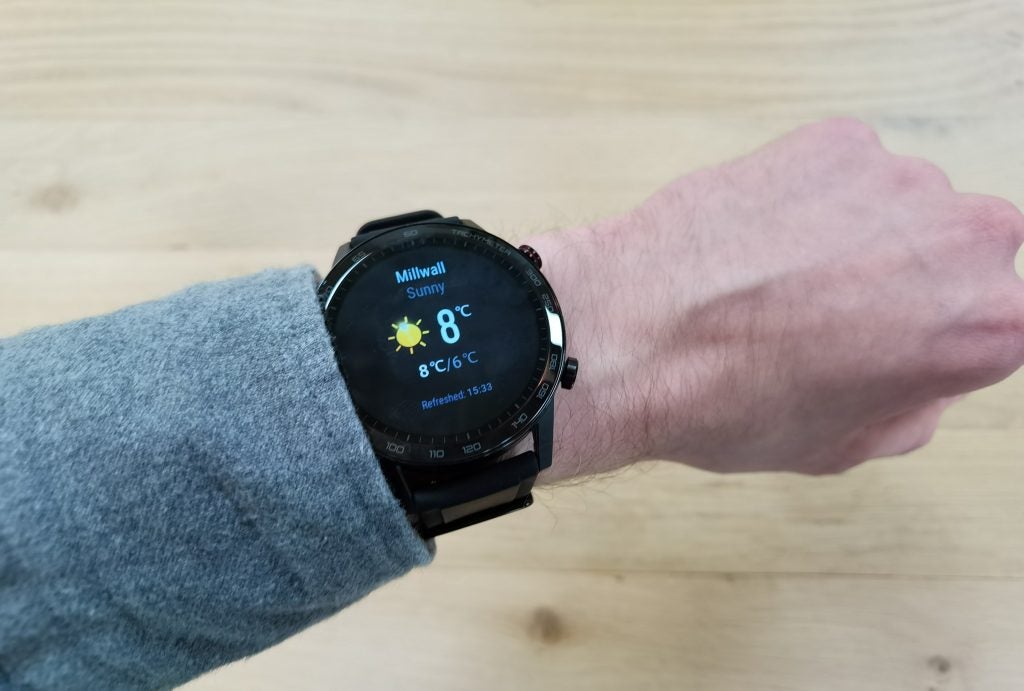 The AMOLED touchscreen is sharp, bright, and offers several snazzy options for a watch face (accessible by pressing and holding the screen – a function that can be accidentally called upon if you have the habit of crossing your arms like an impatient schoolteacher).

Overall, it’s a design that offers functionality as well as a smart look that suits casual or smart clothes well.

As aforementioned, the MagicWatch 2 focuses on fitness rather than connectivity, so its smart implications are actually quite limited – it won’t receive texts or notifications from other apps, for example. If you’re looking for a wearable that works as a shortcut to your smartphone, then this won’t cut the mustard – but fitness fanatics can keep their hopes up.

For health and fitness features, the wearable synchronises with the Huawei Health app. It’s got 24-hour heart-rate tracking (even during swimming), sleep tracking, and onboard GPS, so it’s capable of good feedback for a range of activities also including running, skiing, etc. 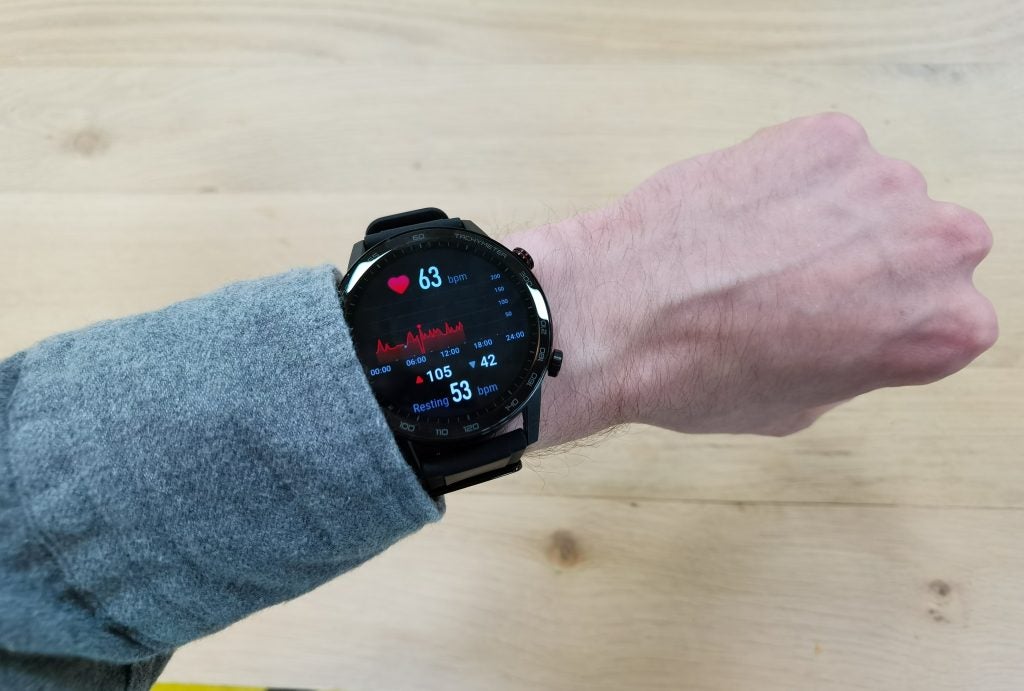 The app gives you full information on exercise after it’s complete, but the interface on the watch also offers some useful stats to browse through to browse; you can scroll left to right for heart rate, stress levels, weather forecast, music and fitness daily goals, while the main menu offers handy tools like a flashlight, stopwatch, and a “find my phone” function. 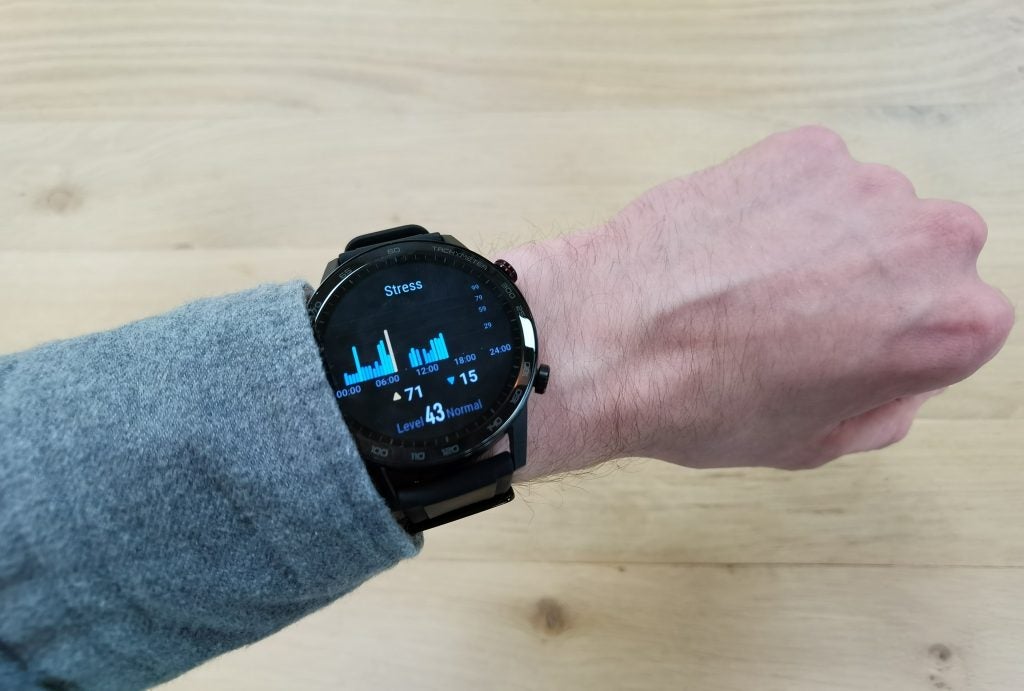 The Honor MagicWatch 2 will also tell you your stress levels

So while the watch has only limited “smart” features, there’s plenty of utility and its fitness abilities appear especially promising.

As stated, the MagicWatch 2 offers a strong list of both outdoor and indoor sports to track, including running, cycling, swimming, and rowing. But how well does it perform those tasks? I took it out for a 10K run, and overall I found the wearable to be helpful on the go, and informative when I’d finished and was ready to review my fitness data. 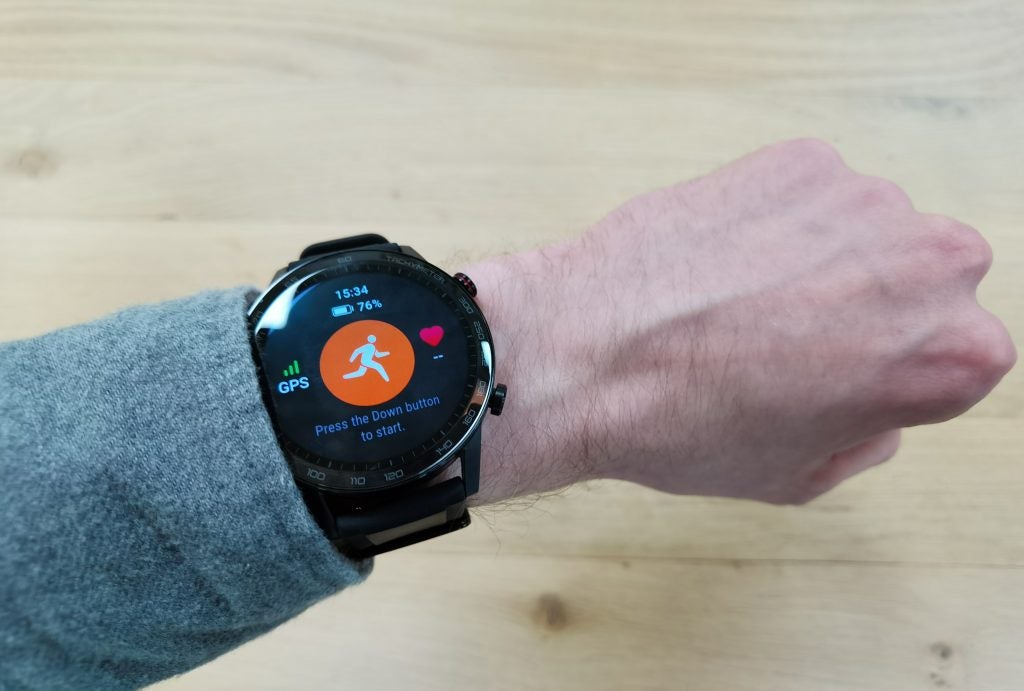 Time for a run? The Honor MagicWatch 2 has been made with a strong fitness focus

Before you set off, simply select the form of exercise you’re about to undertake via the watch’s menu; the GPS was very quick to connect when I selected an outdoor run. When you’re pounding the pavement, a quick glance at the display lets you know your heart rate, pace, distance travelled, which gives you a good idea of your current performance. On top of that, it also reads aloud your split times and heart rate after each kilometre, which I found to be informative but also a little discomfiting when I was running past groups of strangers. 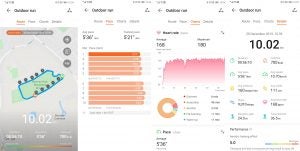 Once you’ve finished with your exertions, the watch can synchronise with your smartphone, and give you a more detailed rundown of your activities. Map of your laps, breakdown of times, but also altitude change and estimated step cadence. There’s also more in-depth indicators such as VO2 Max, but it’s hard to ascertain the genuine accuracy of such statistics from this or any wearable.

For the rest of the day, it offers 24/7 heart rate tracking and sleep tracking, both of which seemed accurate and reliable. Such data gives a more rounded idea of your overall health and fitness, and provides a good reason to wear it through the day rather than just saving it for workouts.

Honor claims that the MagicWatch 2 will last for 14 days before it needs recharging, and our testing bore that out as accurate. The endurance is impressive, especially when compared to costly rivals like the Apple Watch Series 5, and it means that you can wear it day after day without the nagging worry of being left in the dark if you didn’t put the device on charge the night before.

You can choose to enable an always-on display, but this will cut the battery time in half. When it does come time to charge it back up, a magnetic charging pad is included with the device and it hooks up to a plug via a USB-C cable.

The enduring battery life is a definite recommending factor of this device.

Should you buy the Honor MagicWatch 2?

You should definitely consider it if you’re into fitness, as it does well at tracking your exercise, but if you’re looking forward to a gadget that can substitute for your smartphone in certain key respects, then this isn’t the right one for you.

The MagicWatch 2 is good value for money for what it does, especially considering its sharp design and attractive screen, in partnership with its enduring battery life.

As a fitness tracker, this device fits the bill for most people’s needs; it’s accurate, has all the features you’re likely to want, and all for a good price. Its attractive looks and strong battery performance are also recommending factors. But if you want a convenient device that lets you cut down on smartphone screentime in favour of a wrist-based companion, then you’ll likely be disappointed by the slim range of smart features.