What is Samsung SmartThings?

One of the biggest pains when building a smart home is that you usually end up with a disparate collection of devices. Inevitably, this means installing loads of apps to sit alongside a growing collection of hubs connected to your router. Samsung SmartThings is designed to improve things, providing a single hub and app that you control everything through.

With the second-generation hub, wider device support and better third-party integrations, such as for Amazon Alexa, have dramatically improved SmartThings. When it first launched, SmartThings was an interesting look at the future, but now it’s become an essential part of my smart home.

The heart of SmartThings is the version 2 Hub. It’s a neat, unobtrusive white box (65 x 63 x 59mm) that you’re likely to tuck away in a cupboard. It’s mains-powered, although it takes four AA batteries (supplied) for backup. In the event of a power failure, it means that your system can keep running some automations, such as security monitoring. 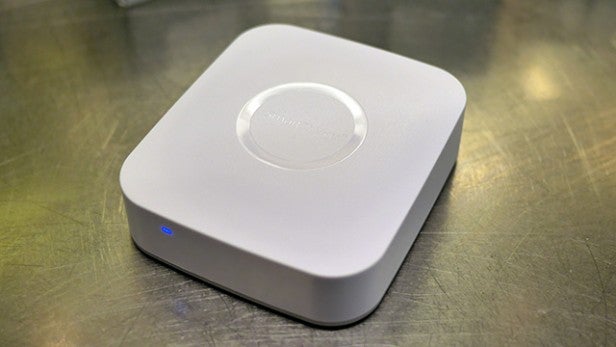 You can buy the Hub on its lonesome, or in a kit that also nets you a set of battery-powered Zigbee devices: one Outlet (a controllable plug-in socket), one Multi Sensor (a door/window, temperature and vibration sensor in one), one Motion Sensor and one Presence Sensor (which detects if you’re home or not). If you’re starting out, the kit makes a lot of sense, as it gives you the basic building blocks to start with and is cheaper than buying each component individually.

SmartThings’ strength is in how it can connect devices from different vendors. There’s a list of officially supported devices, which are guaranteed to work, although the Hub will also play nice with most other Z-Wave and Zigbee devices. This automatically lets you pick from a huge selection of accessories, from door sensors and smoke detectors to moisture sensors and a key-free Yale smart door lock.

An additional benefit of these protocols is that communication is two-way, giving you state information. For example, if you set your security alarm, a window sensor can warn you if it’s already open.

This new Hub also has two USB ports and Bluetooth LE built in, for future device support. Bluetooth is not enabled, but once it is, it should increase the number of control options. On top of that, there are other third-party integrations, letting you control some products directly from the hub. For example, Philips Hue bulbs can be controlled by SmartThings, although you still need the Hue Hub, which is a little disappointing. 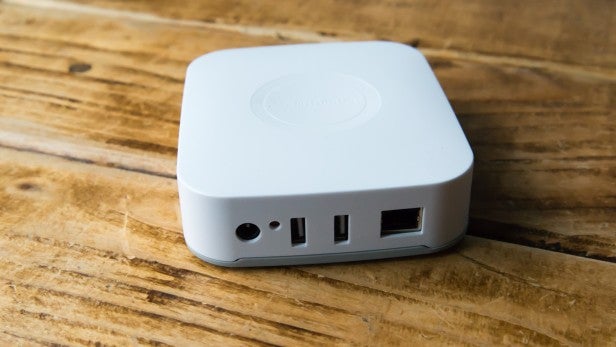 There are also integrations for smart cameras, including the Netgear Arlo Wire-Free (but not the newer Netgear Arlo Q). Currently, Samsung is offering free cloud storage while the camera part of SmartThings is in beta, but this will turn into a paid-for option. It’s a real shame, as many cameras come with free cloud storage, such as the Arlo, which would make paying for SmartThings’ storage an unnecessary expense.

Even more devices are supported through IFTTT. As this integration is cloud-to-cloud, IFTTT applets can take a few seconds to trigger. This is fine for some applications, such as starting to trigger a camera to record if a door sensor is triggered. But where you need a faster response, such as triggering a light to come on in response to motion, IFTTT is no good.

Fortunately, SmartThings has a powerful API that lets developers write their own device handlers that run directly on the Hub. There are great integrations out there for Nest and LightwaveRF (the best smart light switches, in my opinion). Any integration running on the Hub provides near-instant responses. That’s the good news; the bad news is that setting up third-party integrations isn’t always straightforward and involves pasting code into the developer’s web interface at a minimum. Some need additional hardware or software.

For example, the LightwaveRF integration is brilliant, and I use it. But I had to add the required scripts to SmartThings, manually add every LightwaveRF device, and set up a Raspberry Pi running a server script. I’d like to see more manufacturers directly integrate with SmartThings, just to make configuration easier. 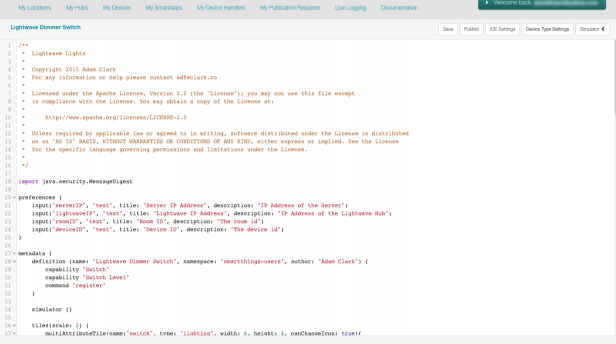 Everything in SmartThings is controlled through the app, which is available for iOS and Android. At its most basic, you can simply organise your devices into rooms and manually control them. For example, I can set the brightness and colour of my Hue lights, toggle a lamp on or off, and play or pause my Sonos. I’m a big fan of the app’s interface, and its simplicity makes SmartThings better than many manufacturers’ own apps. 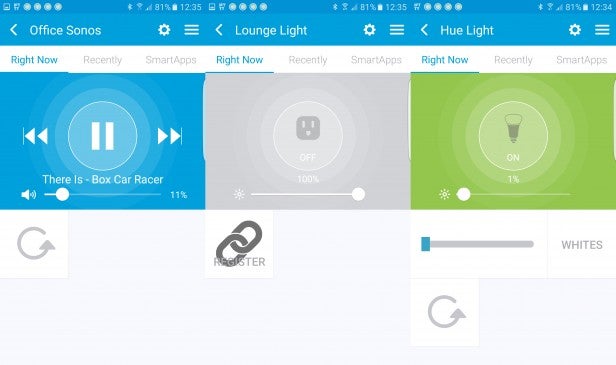 So far, so clever, but SmartThings is about more than manual control; the system is more flexible and can help you automate your home. Where SmartThings really comes into its own, then, is with Smart Home Monitor, Routines, Modes and SmartApps. These are the building blocks that let you make your smart devices work in incredibly powerful ways.

First, you have Modes, which are used by Routines, Smart Home Monitor and SmartApps to change what your devices do. For example, in Away mode you can have motion sensors used for security, while in Home mode, you may want to use your motion sensors to trigger lights. This is incredibly powerful, as all sensors become truly multi-purpose. 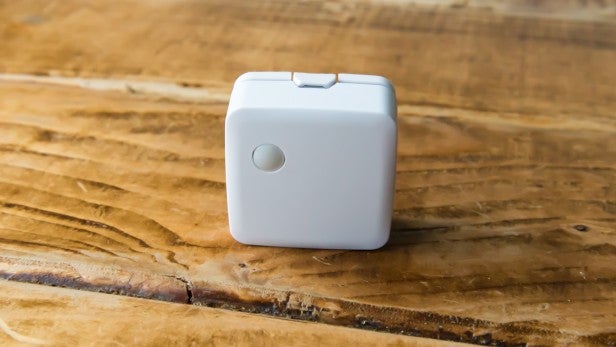 SmartThings is pre-configured with three modes: Away, Home and Night. You can add your own, too, although not through the app, and you have to use the rather basic web interface. It’s a little frustrating that such a basic feature isn’t available in the app. I’ve added a Guest mode, which effectively disables any automatic mode changes. This is so that when other people come to stay, the alarm system doesn’t get armed and lights don’t turn themselves off automatically.

Mode changes are handled by Routines, which can be activated manually or automatically. For example, SmartThings can use Presence Sensors and mobile phones to detect when everyone has gone out, switching the mode to Away. Alternatively, you can set a time, such as starting Night mode at 11pm every day. Exceptions can be put in place, so my Night mode won’t start if the current mode is set to Away; otherwise, my home security could be compromised through motion sensors being disabled.

Routines can, in addition to (or instead of) changing Modes, trigger actions automatically. When I go out, for example, SmartThings turns off all of my lights and pauses every Sonos player.

You can also configure Routines to link smart devices together, such as using a motion sensor to turn on a light. Cleverly, Routines can be limited to only work in certain modes and at certain times of the day. 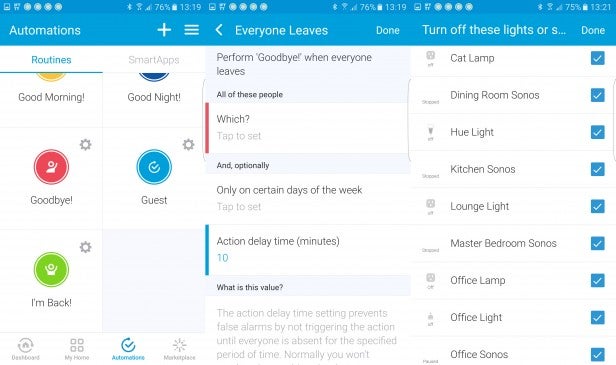 On top of these more manual settings, Samsung has its Smart Home Monitor, which has predefined modes for Security, Smoke Detection and Leaks. Using any Home Monitor mode requires the right kinds of sensor, such as a moisture sensor for leak detection. Security is the easiest mode to get started with, as this has the most flexibility and supports the widest range of sensors.

The Security mode also lets you set up the types of alert you want, ranging from a simple notification to triggering a dedicated siren and making a camera start recording. There are some clever workarounds, too. I don’t have a dedicated siren, so I’ve set every single Sonos player to play an alert sound at 100% volume, and every smart light to turn on. However, if I bought a siren, I could have that and the Sonos system going off together. 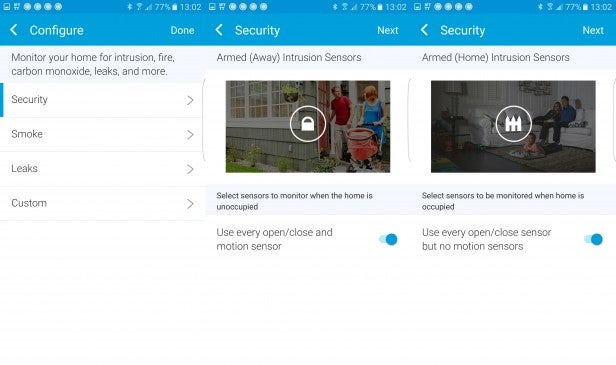 Intelligently, the Security mode can be configured automatically to be changed by a Routine. The best way to do this is by using presence sensors, so that the alarm activates automatically when everyone is out, and turns off when someone arrives home. Phones with the SmartThings app can be used for the job, but Samsung also sells dedicated presence sensors. 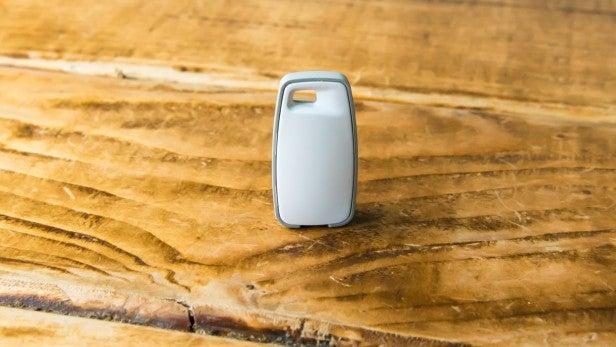 This generally works well, but there are a few issues. First, if you’re out and you lose your phone or it runs out of battery, there’s no way to disable the alarm. Secondly, if you need someone to pop into your house then they too need a presence sensor. Sadly, there are no officially supported keypads, so that you can disable the alarm with a PIN. There are unsupported keypads from the US, which have support via third-party developers, but I haven’t tested them, and the setup looks a little complicated.

RELATED: The ultimate multi-room audio guide: Sonos vs the rivals

SmartApps – available in the app through the Marketplace – are additional tools that can make your SmartThings devices do more, beyond simple control. These range from big integrations with other services, such as IFTTT and Alexa, to smaller and more diverse control.

For example, in the SmartThings Marketplace you can find SmartApps that can slowly wake you at a set time by raising the brightness on a dimmer control, or that can use a Multi Sensor to detect when mail has been posted through your letterbox. With lots of developers writing their own SmartApps, there’s a huge amount more that you can do with the building blocks that SmartThings provides.

One of the biggest changes to come to SmartThings is Amazon Alexa support through the Echo and Echo Dot. Thanks to an official Alexa Skill, anything that SmartThings can control can be controlled using your voice, including on/off devices and dimmable light switches. It’s incredibly powerful, and if you want your Echo to do more, SmartThings is your gateway.

Routines can also be activated, but for security, you can only activate SmartThings Routines that don’t contain prohibited devices: locks, security devices and cameras. Without this restriction, someone could break in and say, “Alexa, turn on, I’m back!” and your alarm would be disabled.

Should I buy the Samsung SmartThings?

SmartThings is a brilliant system that should form the backbone of most smart homes. Its excellent automation, wide range of compatible devices and Alexa support truly make it the most flexible smart home system that I’ve used. Given its capabilities, it’s incredibly well priced, especially considering that the Hub supports Z-Wave, Zigbee and custom apps – a Z-Wave hub alone costs a similar amount.

The downside is that SmartThings can be fairly complicated, particularly when you get into the third-party developments. Still, the odds are that if you’re building a smart home (or want to), you’re probably pretty tech-savvy anyway.

SmartThings is evolving all of the time, but for anyone serious about home automation and monitoring, it’s the best product.

A flexible, expandable smart home product with excellent developer support, SmartThings is the system that can make your devices play nicely together.