Fixing the issues caused by the lack of a proper HDMI input on the Sonos Arc, the HDFury Arcana is the upgrade that many of us have been looking for. It lets you pump full Dolby TrueHD sound from any source into your Sonos Arc, without having to go through your TV, improves lip-sync and can even push Dolby Vision content to standard HDR10 TVs. There are a few little quirks, such as having to be careful about the order you turn things on, but otherwise, this box delivers the features that Sonos arguably should have provided

This simple external box takes any external input and pumps the audio into the Sonos Arc (or any other eARC-compatible soundbar) at full lossless quality. It’s a touch expensive to deliver something that Sonos should, arguably, have thought of at launch.

But if you’re not getting the full performance out of the soundbar, or avoiding purchasing one because you won’t get the most out of it, the HDFury Arcana is an essential purchase.

The Sonos Arc requires an eARC or ARC input from your TV to get audio, and you can’t directly plug in external devices. This has two main problems. HDMI eARC is a relatively new standard, only available on TVs made recently, which means that most people that buy a Sonos Arc are reliant on the old HDMI ARC standard.

HDMI ARC has less bandwidth than the eARC standard, which means it’s only compatible with lossy compression algorithms, such as Dolby Digital Plus and Dolby Digital, rather than the improved, lossless Dolby TrueHD. Although you can get Atmos via Dolby Digital Plus, only a select group of TVs are capable of doing this, such as LG TVs from 2018 onwards, as my explainer on how to use the Sonos Arc on a TV without eARC (and get Dolby Atmos) shows.

There’s a further problem with HDMI ARC and, to a lesser extent, HDMI eARC – lip-sync. Passing all the audio through the TV can often cause infuriating lip-sync problems that are nigh-on impossible to fix.

The HDFury Arcana has been built to fix a lot of these problems. It’s a small rectangular box, powered via USB-C. It has three HDMI ports, with one an input that you use to connect to an external device, such as an Ultra HD Blu-ray player. 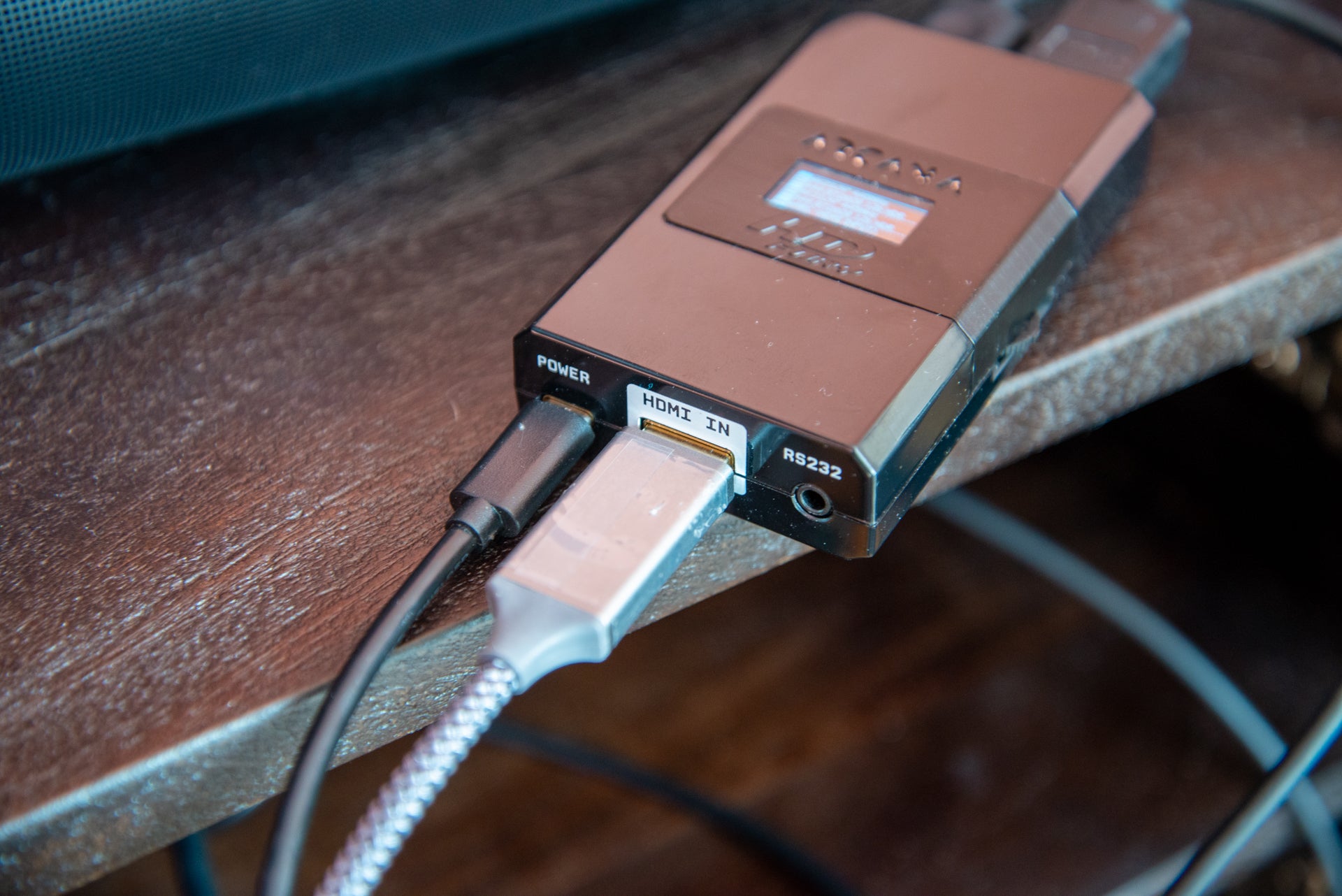 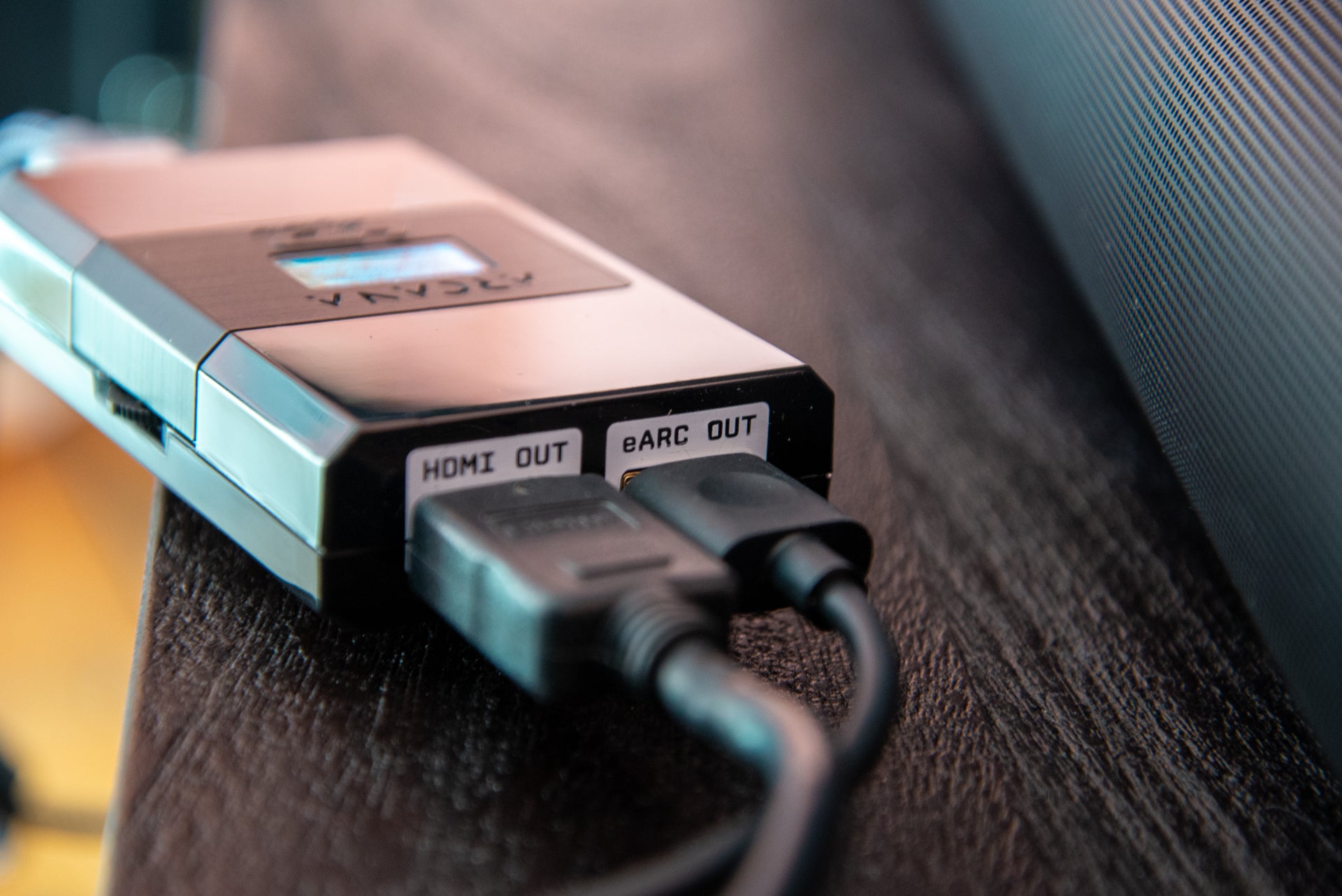 Splitting the audio from the picture in this way also means that you’re not limited to using the ARC with a TV, and can plug the Arcana into a projector if you prefer.

At its simplest, you power up your Blu-ray player and the full uncompressed Dolby TrueHD or Dolby Atmos audio is sent to your soundbar, with the images going to the TV. Cleverly, the Arcana is also capable of detecting when HDMI ARC or eARC audio is being sent from your TV, and can route this to your soundbar, so you don’t lose audio quality when using your TV’s built-in apps.

Although I specifically mentioned Dolby TrueHD, any other sound format can be passed through, including DTS-HD MA; however, the Sonos Arc doesn’t support DTS sound formats.

If the one HDMI input isn’t enough, you can always buy an HDMI 2.0 switch and plug all of your external devices through that, as I did.

Although you can run the system as is, the Arcana has an LCD screen and switch on the side that lets you change options. There are some basic ones, such as choosing if you want to send audio to the eARC port only, the TV only or both; the default Auto mode should suit for most setups, but you might want to force a destination if you’re having issues. 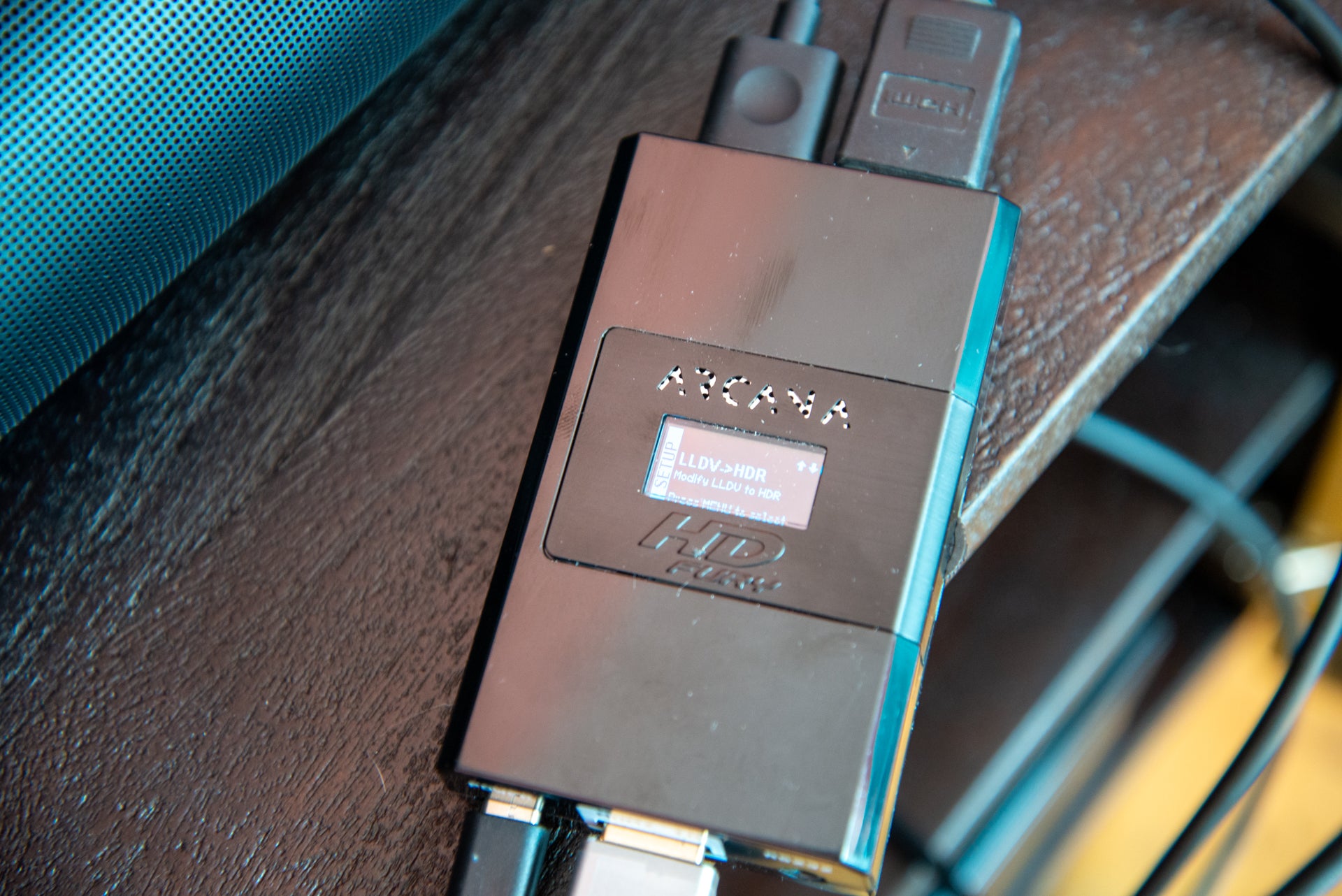 As I have a 2018 LG OLED TV, the Sonos Arc works to a good degree, although the maximum audio codec I can use is Dolby Digital Plus with Dolby Atmos. Plugging in the Arcana and firing up Captain Marvel on 4K Blu-ray, I checked the Sonos app and saw that I was getting the full Dolby TrueHD input. 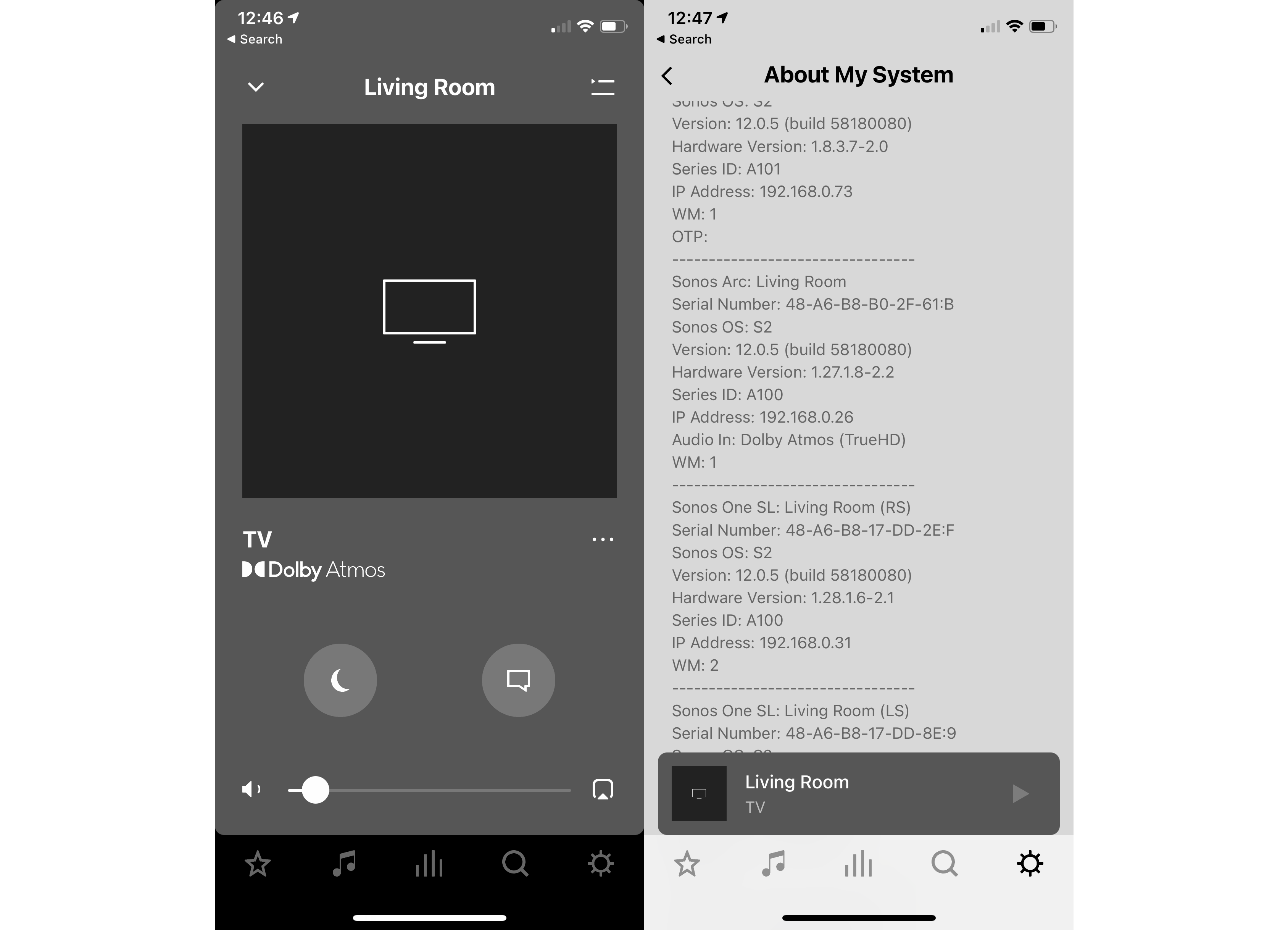 The improvement in audio is a small but important one. With the lossless Dolby TrueHD, audio is that bit cleaner and richer with more detail. Sure, the actual positioning of sound and the immersive audio you get is the same, but there’s a wider, more interesting soundscape, delivered at the sound quality the filmmakers wanted.

Next I fired up the Netflix app on the TV and put 6 Underground on. Netflix uses Dolby Atmos delivered over Dolby Digital Plus, and the Sonos app confirmed that I was still getting this. So, for those that have a Dolby Atmos-capable TV, your streaming apps will continue to deliver the best quality sound.

If you don’t have a TV that can do Dolby Atmos, all internal apps will be limited to 5.1 sound instead. You may want to switch and use an external media player that supports the format instead, such as the Fire TV Stick 4K.

The next problem concerns DTS, which the Sonos Arc doesn’t support. While I can set my player to decode and send DTS as 5.1 PCM (uncompressed audio), the Sonos Arc only supports stereo PCM. That’s frustrating, as eARC and the Arcana have enough bandwidth to handle the uncompressed 5.1 sound; Sonos is said to be working on an update that will sort this. If so, then the Arcana should finally sort the issue of getting DTS to work on Sonos products.

Finally, using external devices, such as Sky Q and my Ultra HD Blu-ray player, lip-sync was a problem and one that was hard to sort completely: something was always off. Now, with the Arcana, the problem has gone completely, as the audio isn’t routed through the TV.

The Arcana isn’t completely perfect, though. I had an initial problem where the Arcana wouldn’t deliver any sound when I inserted a DVD. A firmware update fixed that issue, but there are still a few quirks. Use Sky Q, for example, and pressing the Home button cuts the sound off for a few seconds each time. And, leave an input source on, such as Sky Q, and use one of the TV’s apps, such as Netflix, and you get stuttery sound. It seems as though the Arcana has problems working out which audio it should route to the soundbar. For now, if you use your TV’s built-in apps, then turn off anything else plugged into the Arcana’s HDMI input.

Make sure you keep an eye on the official website and download any firmware updates as they come, as they’ve ironed out a lot of the initial issues I had with the system.

Whether this little box is worth the money largely depends on the setup you’ve got. If you’ve got a brand-new TV with eARC built-in, then you don’t get a lot of benefit, other than dealing with lip-sync issues.

If you’ve got a TV that supports Dolby Atmos via ARC, the HDFury lets you use external players with full-quality sound, although the improvement is a more subtle one. However, lip-sync issues can be banished for good and, provided your Blu-ray player supports multi-channel PCM, you’ll eventually be able to send decoded DTS soundtracks to the Arc.

If you have an older TV that doesn’t support Dolby Atmos at all or a projector without eARC (most models), then the Arcana shows its true colours, pumping the 3D surround format straight into your soundbar, giving you the full benefit of the Arc without having to make an expensive upgrade.

In effect, the HDFury Arcana fixes problems with eARC soundbars and, in particular, the Arc soundbar that wouldn’t have been there if Sonos had just included a single proper HDMI input.