Haier’s claim for the noise of this model varies by source, the manual and label claiming 40dB and the website 42dB. Ironic then we measured 40, 41 and 42dB at different times in its running cycle. The difference in those very quiet figures – just above the ambient noise in a library – is very difficult to detect by ear so we were unable to ascertain what stage of the cooling cycle the Haier was in at any given point. It didn’t make any odd pops or gurgling noises, like the recently tested John Lewis model, and at 42dB the Haier A2FE635CFJ is not going to keep you awake at night – even if you sleep in the kitchen.

Haier A2FE635CFJ: How well does it perform?

Unsurprisingly for an A+ rated fridge freezer, the big red Haier turned in a very consistent set of test results. The tall fridge compartment shows quite a variation in temperature from top to bottom, but its consistency means this is no bad thing. The top shelf averaged 6 degrees +/-2 degrees throughout the cooling cycle, while the middle shelf and salad drawer held a very solid 4 degrees at just +/- 0.5 degrees variation.

The My Zone compartment set to ‘Chiller’ averaged just fractionally above 0 degrees but did bounce between +2 degrees and -2 degrees, with very brief spikes down to -4 degrees C throughout the short 30-35 minute cooling cycle. For meat and fish this would be fine, but the ‘Chiller’ setting could cause frost damage to soft fruit and some vegetables. 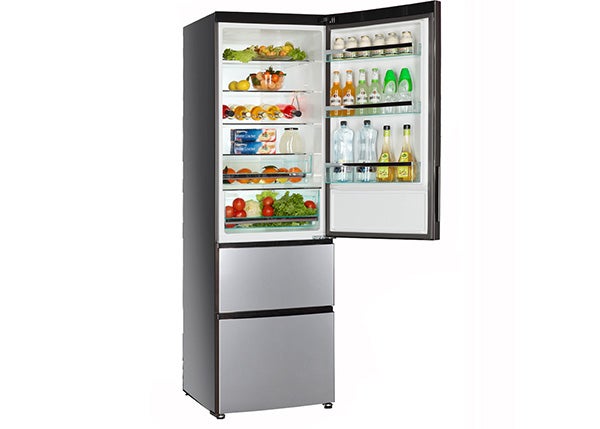 The freezer compartment produced a textbook perfect set of results that even models with considerably higher asking prices have struggled to achieve. The air temperature in the top draw and bottom draw averaged precisely -18 degrees C throughout the two-day test with a variation of just +/- 2 degrees thanks to the short compressor cycle. As such our two litres of water took a rather lengthy 24 hours to reach -18 degrees at its core, so using the fast freeze function would be recommended when putting room temperature/fresh food in the freezer.

While this Haier offers a lot of capacity for its size, which usually means reducing insulation thickness, the A2FE635CFJ did fairly well in the three-hour fail test too. The air temperature in both freezer drawers reached -11 degrees C, while our food sample only gained 4 degrees during the fail. This would give the Haier a comfortable food safe time of around 14-16 hours of power failure, which is very good for an A+ rated machine.

How we tested
We placed 0.5kg of food per 10 litres of fridge space and 1kg of food per 10 litres of freezer space in each compartment, which included 2 litres of room temperature water in the freezer to replicate freezing fresh food. Our equipment took a temperature reading every minute at the top, middle, bottom and My Zone compartment of the fridge, which we set to its Chiller (0 degree C) mode. Three more temperature probes were placed in the freezer, in the top drawer, bottom drawer and in the middle of the teat 2 litres of water. We set the fridge at 4 degrees C, the freezer at -18 degrees C, and opened the doors around 6 times a day over the 48-hour test period. 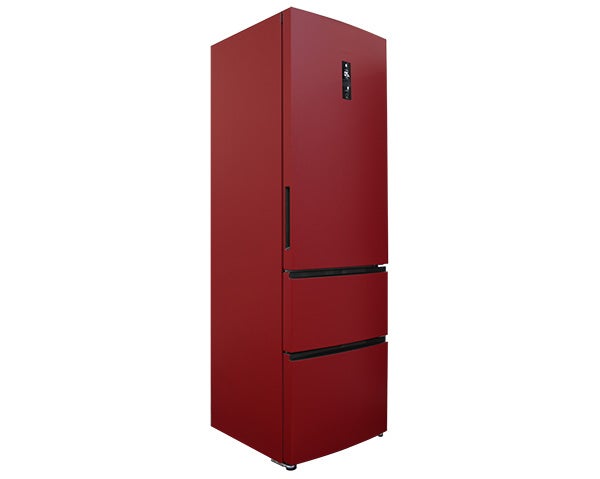 Haier A2FE635CFJ: How much will it cost to run?

Haier claims the A2FE635CFJ will use around 348kWh per year. Our tests in a controlled 18-degree ambient temperature and with the doors opened only six times per day suggested it would use quite a bit less electricity than this. Around 316kWh per year in fact!

This is a pretty good result for such a large fridge freezer, although an A++ design fridge freezer of the same size would shave another £10 a year or so off of the running costs. In a hotter kitchen environment or with a big family accessing the fridge and freezer more regularly, the running costs will rise above our ‘standardised’ test results. 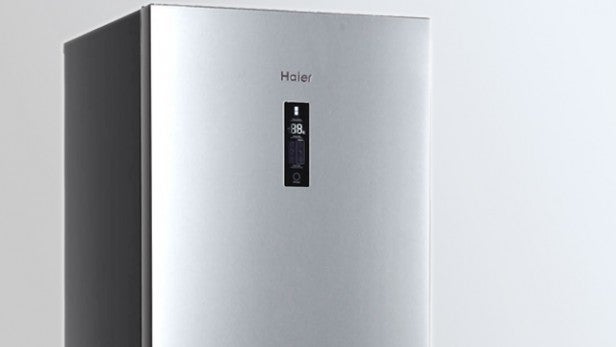 Should I buy the Haier A2FE635CFJ?

The Haier A2FE635 is a bold and imposing beast of a fridge freezer, one that will polarise opinions if you opt for the red version. You can’t argue with its features or performance, though, which means it’s one you should seriously consider.

We love the My Zone compartment, humidity controlled salad drawer and innovative pullout freezer drawers, while the LCD controls and spectacular lighting make it easy to use, too. To top it all, it uses even less electricity in our tests than claimed by the manufacturer, which is very rare indeed.

The only reason not to go for it would be if you need more freezer space, but then it’s fairly typical in fridge freezers of this size. The Grundig GKN16820X, another fridge freezer we recommend, has a similar size freezer but lacks features like My Zone and actually has less fridge space.

It’s an excellent fridge freezer at any price, but an absolute steal if you opt for the cheaper silver A2FE635CFJ version. We love it.