This large side-by-side fridge freezer is the cheapest American-style model we’ve tested – one of the most affordable on the market, in fact. But while the price is low, the feature count is certainly not. From the outside the look and feel is that of a far more affluent product and the chilled water dispenser and ‘twist and serve’ ice-cube makers are nice touches at this price point.

The inside is no less lush. You get an approximate 65/35 split in favour of the refrigerator with a monster 364 litres of chiller space. This offers a forced air system, called Neofrost by Beko, for consistent frost-free cooling and a dedicated low-temperature chiller drawer ideal for meat and fish. The freezer space offers five shelves, two drawers and four slim door pockets for smaller items. The A+ energy rating is to be saluted, as is the anti-bacterial coating on the door seal, which should reduce the build-up of black mould over time. 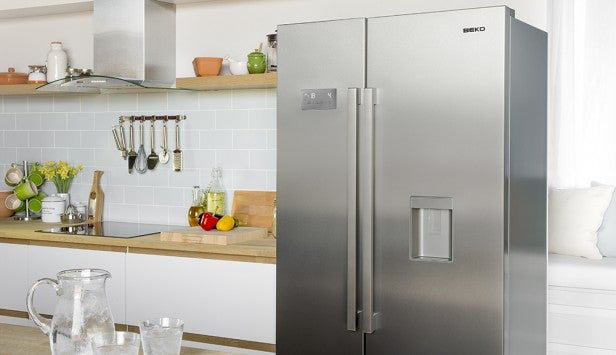 It might be cheaper than many expensive rivals, but it doesn’t look it. Our test model was painted silver, although it’s also available in black or full stainless steel for around £100 more. It has brushed stainless steel handles and a mirror-like LED display that shout quality and style, while the controls are touch-sensitive buttons built into the LED panel. These allow easy temperature adjustment as well as Quick Fridge and Quick Freeze functions that boost cooling for a short period of time if you have just filled the fridge with fresh products.

Tugging on the door handles does hint at the Beko’s more budget underpinnings, however, as they flex a little as you open the door. The in-door water dispenser is quite shallow and compact but this does mean it doesn’t eat too much into your fridge space. The dispenser uses a small water container held underneath one of the door pockets and is filled by pouring water through a funnel built into the door pocket. The water isn’t filtered and runs out rather slowly, but the cup lever cuts off well, without too many drips. 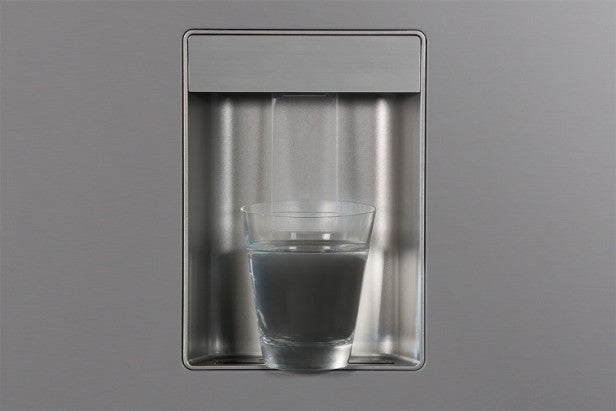 On the inside the Beko AD241 is crisp, clean and white with glass shelves and an admirable level of furniture. The bright LED lighting strips down the sides of both fridge and freezer compartment do an excellent job of illuminating every corner save the very lower recesses of the freezer when it’s full – which isn’t unusual.

If you leave either door open for too long an alarm sounds and the lighting gently pulses on and off to remind you. The door pockets and bins are crystal-clear plastic with a removable chrome wire bottle rack in the fridge.

In terms of storage space per pound spent, this Beko is an absolute monster and will happily hold a week’s worth of food for even the largest of families. The 65/35 split offers 364 litres of chiller space and a decent 190 litres of freezer space. The latter is unusually large as American-style freezers often get the thin end of the capacity deal. For example this Beko offers over 20 litres more freezer space than our favourite side-by-side model, the Samsung Food ShowCase, which won Best Fridge Freezer in the TrustedReviews Awards 2014. 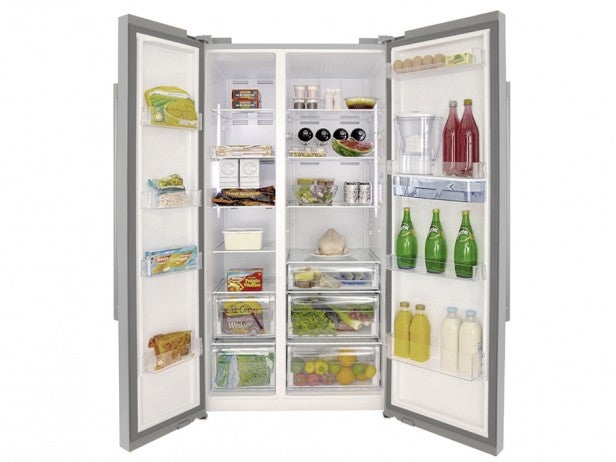 The fridge space offers four glass shelves and a removable bottle rack, two deep vegetable drawers and one low temperature compartment suitable for fish, meats and cheese. Like most side-by-side models the bottom drawer loses some space making way for the compressor, and gains a bit back by coming right out as far as the door.

On the door you get a deep bottle shelf and a shallower tray above as some of its space is robbed by the drinks system on the front. A further door pocket has the water chiller underneath and at the top you get an enclosed door pocket that slides forward as the lid is opened. We weren’t convinced there was great deal of use to this mechanism, although the enclosed compartment could be home to items that might otherwise smell-out your entire fridge, such as Camembert.

The freezer’s two deep drawers work well and the five shelves offers plenty of pace to cram in frozen foods. The Twist and serve ice cube trays do eat up a fair bit of freezer volume, though. They are set towards the back of the compartment and you need to access the knob and trays from the front – so you can’t really put anything in front of them. We can see a lot of people removing these and going back to standard ice-cube trays to regain the space.

The freezer door pockets are another nice touch, although they are only a few inches deep so don’t expect to get much of your weekly shop in them. Given the Beko’s healthy freezer capacity and its good split of drawers, shelves and pockets, this would make an ideal choice for the larger family.

While the price tag would indicate something that sounded more like a tractor than an electric car, the Beko is pretty quiet. While not quite worrying our 40dB noise test threshold like most of the more expensive American-style models have done, it actually measured 1dB less than Beko’s claimed 45dB noise rating.

As it is a well-insulated and energy efficient machine from its A+ rating, this means that the compressor doesn’t actually run for very long when it’s on, either. So a respectable performance all round, if not super silent. 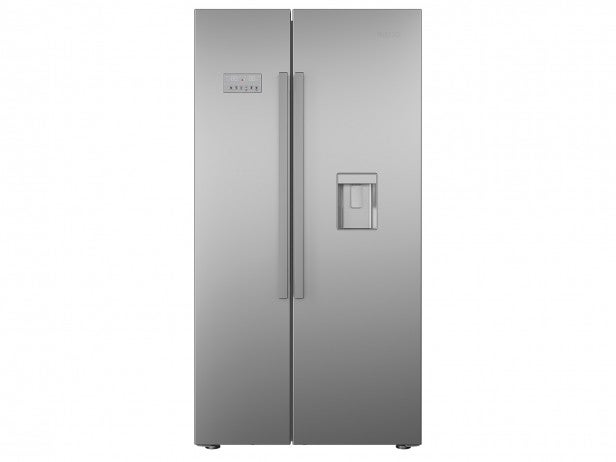 Overall, this Beko posts a solid set of results, if not as precise or consistent as some models we’ve tested.

As usual, we filled the Beko with 1kg of frozen food per 10 litres of claimed freezer space and 0.5kg of produce per 10 litres of chiller space, and set the temperature to -18 degrees C and 4 degrees C respectively. Eight temperature probes were split between the compartments at top, middle and bottom of each plus special probes for our room temperature to frozen test (2 litres or room temperature water) and the low temperature chiller draw of the fridge. Two days of testing and measuring, opening the doors around half a dozen times per day, and the results were in.

The Beko’s freezer produced a very impressive set of results. Although the average air temperature came in a little low at -20 degrees – which would use more energy than if the machine was genuinely at -18 degrees – this temperature remained very consistent throughout the compartment. It was also very stable through a compressor cycle at just +/-2 degrees. Our room temperature food sample took a lengthy 20 hours to reach -18 degrees, indicating that it would be well worth using the Beko’s Quick Freeze function when you are freezing room temperature produce.

The Beko runs a short defrost cycle every five hours or so, where the internal freezer temperature rises to -15 degrees. Combined with the slightly low air temperature normally, this actually kept our frozen food sample at exactly -18 degrees throughout the test. Perfect! The three hour fail test showed fairly good insulation, with freezer air temperature reaching -6 degrees and our frozen food getting up to just -10 degrees, indicating a food safe time of at least 8 hours in the event of a power failure. Not the very best, but pretty good.

The fridge compartment was a little more inconsistent, but nothing that would warrant putting off potential buyers. Over the course of the two-day test period, the top shelf and bottom drawer both averaged exactly 4 degrees but during that period swung around a fair bit at 2/-3 degrees (top shelf) and 2/-1 degrees (bottom drawer.)

Beko’s chiller draw temperature was also on the wilder side of stable – swinging between -1 degree and 4 degrees every few hours. But once again, its averaged result was a consistent 2 degrees over the entire duration of the test, which is close to ideal. 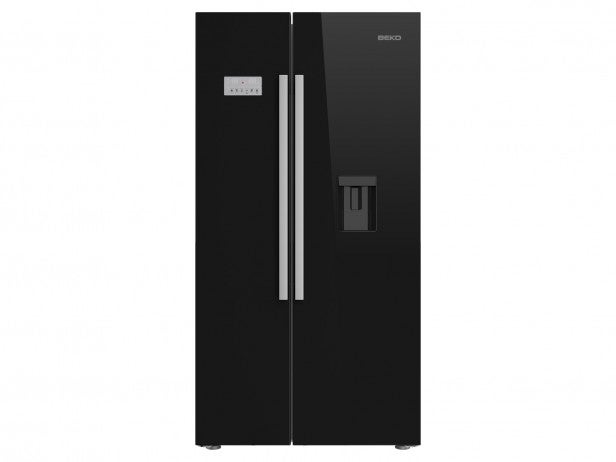 Beko’s claimed 484kWh of electricity per year would cost you around £72.60 per annum, which is not bad for such enormous cooling capacity. In practice, we found this big-chiller used even less than stated at around 451kWh per year, which equates to £67.65 per annum.

Heavy family use in a hot kitchen would certainly bump up the costs a little above our temperature controlled 18-degree test facility and would explain the difference. That said, most of our fridge tests have shown fridge freezers to use more electricity than the makers claim, so this is a great result for the big Beko.

While clearly not as frugal as some of the top-specification American-style machines that cost £40 to £50 per year, the relatively budget asking price more than makes up the difference.

The Beko ASD241 offers superb value for money for its sheer capacity, great finish, useful features and good energy efficiency. While its budget roots do show up a little in the build quality and slightly variable fridge temperature, the overall package works very well and really is quite spectacular value.