What is the SAMSUNG RL60GZEIH?

At over 2.1m high, the Samsung G-Series RL60GZEIH is one of the tallest fridge freezers we’ve tested. That height, combined with a standard 60cm-wide chassis, means exceptional cooling capacity, which is split 70/30 in favour of the massive refrigerator compartment with its 288 litres of space.

It’s a premium design with Samsung’s lush and fingerprint-resistant stainless steel finish, a blue LED temperature and status display, and EZ Open handles that break the door seal to assist with opening. The interior is well designed and well appointed with space-saving features, although the top shelf of the fridge may prove tricky to reach for anyone of a vertically challenged disposition.

Samsung’s Smart Eco system includes sensors that best adapt the compressor’s operation to the temperature and humidity, for precise cooling and energy-efficient running. As such it boasts an official A energy rating. 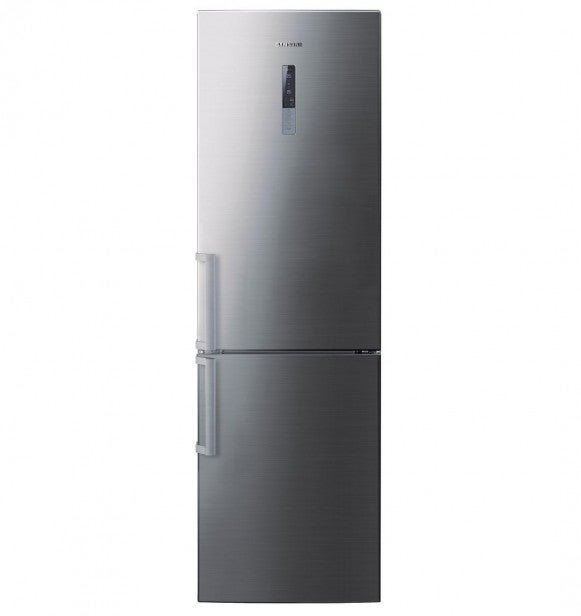 SAMSUNG RL60GZEIH – How does it look?

The blue LED temperature display and control buttons will appeal to those with an eye for high-tech design, although they’re rather high. I’m 5’10” and it’s above my natural eye-line.

The large door handles are comfortable to grip and feature Samsung’s EZ Open system. By pushing the handle in before pulling open, the door seal is relieved, so you don’t have to tug against the door to get it moving. Given the barn-sized upper door, which is capable of storing plenty on its own, this is a very useful feature indeed.

The interior of the fridge is just as swish, with side-mounted LED lights that look snazzy and clearly illuminate the compartment’s contents. 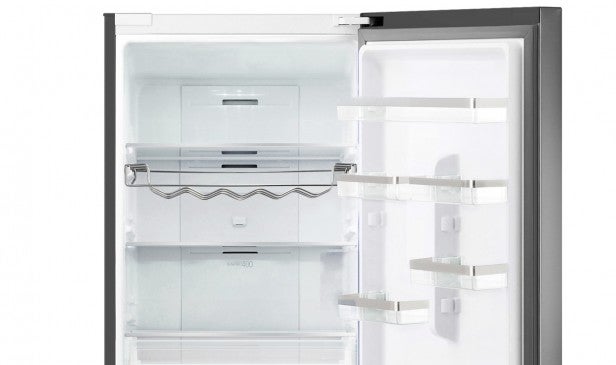 SAMSUNG RL60GZEIH – How much can you fit in?

This Samsung is ideal for larger families or those who really like to buy lots of chilled produce in a single shop. The 288-litre fridge compartment is about as large as you can get in a 60cm-wide appliance without forgoing a freezer compartment completely.

The interior is comprehensively equipped with storage furniture, including three glass shelves, a removable hanging wine rack and two salad drawers. The lowest drawer is massive, extending to the very front of the refrigerator compartment by virtue of eliminating very lowest door pockets. This is also billed as a low-temperature drawer for maximising the shelf life of fruit and veg, although in reality it was no cooler than the rest of the compartment. 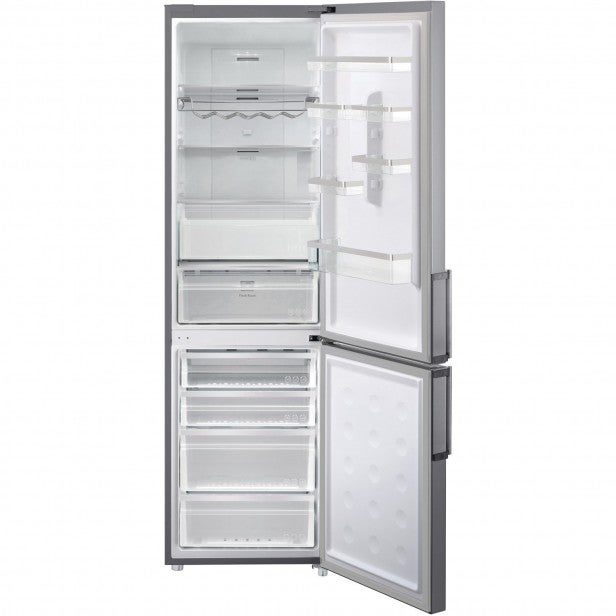 The door storage has been neatly arranged. There’s a deep, full-width bin for larger items such as big milk containers, juice cartons and pop bottles, plus four half-width pockets that can be moved up and down the door, as well as a shallow full-width upper shelf. The door alone can hold as much as a smaller fridge, although we found that the really deep pockets would have benefited from removable dividers to stop things sliding about if the door’s opened vigorously.

The freezer compartment is rather more mundane. While it’s a fairly compact 112 litres, though, it’s handily divided into four clear drawers, each with slightly different heights to maximise your storage space. There’s no lighting in the freezer compartment, but you do get a floating tray which is ideal for ice-cube moulds and smaller items.

SAMSUNG RL60GZEIH – How noisy is it?

Samsung’s premium refrigeration products have all proven to be very quiet, and while the RL60GZEIH is no exception, it did measure a little higher than Samsung claims. In free space it measured 44dB – A-weighted to best replicate the sensitivity of human hearing at this level – which is actually twice as loud as Samsung’s published figure of 40dB. Given that 44dB is about the same sort of volume as wind rustling through trees, it’s unlikely to be noticeable in all but open-plan spaces.

SAMSUNG RL60GZEIH – How well does it perform?

With the RL60GZEIH loaded at 0.5kg of food per 10 litres of cooling space, and 1kg of food per 10 litres of freezer space, we placed four temperature sensors throughout the refrigerator compartment, and four more in the freezer. One freezer sensor was placed in the middle of 2 litres of room-temperature water to see how quickly and consistently the Samsung would freeze food to the core. The fridge was set to 4 degrees C and the freezer to -18 degrees C.

Models with air-circulation cooling are often quite consistent in temperature throughout the refrigerator compartment, and here the RL60GZEIH did not disappoint. All four sensors showed exactly the same average temperature over a 48-hour period, and averaged 4.5 degrees, which was very close to the thermostat setting indeed. However, the lower drawer wasn’t greatly cooler than the rest of the compartment, despite the brochure claims.

As the refrigerator switches the compressor on and off during the compressor cycle, the air temperature in the compartment will rise and fall, and the smaller this swing the better the fridge will be at maintaining food temperature. Being such a tall compartment, the top shelf suffered from heat rising to the top, and varied from 1 degree C to 6.5 degrees C across a complete one-hour cycle. This variation was less lower down in the compartment, with the bottom drawers exhibiting a swing of only /-0.5 degrees, which is very consistent. 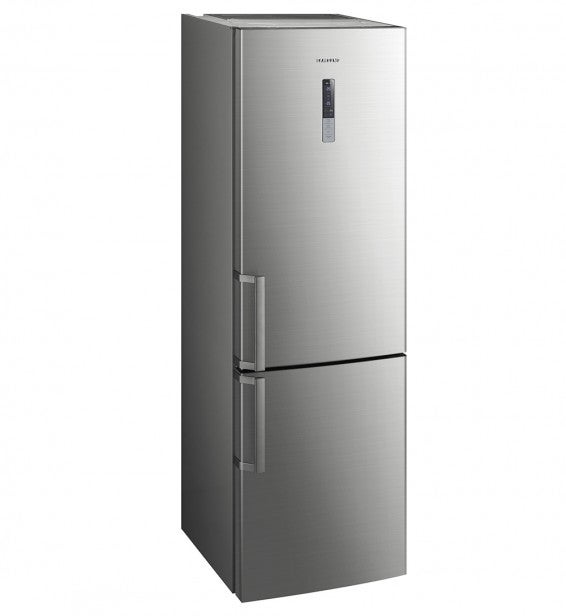 With an A energy rating the Samsung is likely to be well insulated, and this showed in the three-hour fail test. After three hours with no power, the top drawer of the freezer compartment had risen to just -10 degrees, with the lower drawers still showing around -12 degrees.

We estimate that food inside the Samsung’s freezer would comfortably stand a 16-hour power failure and remain safe to re-freeze. Once again from Samsung, this is an exceptional set of technical test results.

SAMSUNG RL60GZEIH – How much will it cost to run?

Being an A appliance we anticipated the RL60GZEIH would be pretty frugal, and it didn’t disappoint. We calculate that it would use around 252KWh per year in an average UK household, which is about 10% less than Samsung’s published figure.

Heavy family use with lots of door openings, or a really warm kitchen, will cause these costs to go up, of course. However, in our test lab, at 18-degree ambient temperature and with the door opened just six times every 24 hours, this model cost less than 10p per day to run.

Should I buy the SAMSUNG RL60GZEIH?

If you’re looking for a huge amount of well-thought-out fridge space, can actually reach the very high top shelf and aren’t too bothered by the relatively limited freezer space, then this premium Samsung fridge freezer is well worth considering.