Editor’s note: This is a review of the original Gtech AirRam, tested in September 2013 with a score of 9/10.

What is the Gtech AirRam?

The Gtech AirRam isn’t like most cordless vacuums you’ll find in the shops. It looks a lot more like a slim upright vac. That’s what it looks like, but it’s actually a very different proposition all together. The AirRam is a simple, energy-efficient floor cleaner looking to steal some of Dyson’s innovative thunder and carve a niche for itself in a popular market.

That’s no easy feat, and the AirRam certainly won’t replace your vacuum. This is, rather, an extension to your floor care arsenal, but with a sleek design and cordless functionality the Gtech AirRam is a very useful one at that.

The Gtech AirRam is not a like vacuum cleaners you might be used to. In fact it’s not really a vacuum cleaner at all. Normal vacuums have a motor that powers a fan. The pressure drop, caused by the fan, creates a vacuum, which sucks up all the nasty things on your floor or carpet. Most vacuums also have a rotating brush that helps feed dirt into the intake. The AirRam differs in its cleaning methods by using the rotating brush as both a sweeper and the fan that helps creates suction and pull up dirt. There’s a small, separate fan that helps increase suction and pull up more dirt. The first thing you’ll notice is that the AirRam doesn’t “stick” to your floor like traditional vacs.

We were initially a little sceptical about how the AirRam would perform. It’s battery powered, light and doesn’t have the suction power of other vacuums, and previous experience with stick and cordless vacs suggested it wouldn’t deal too well with tough chores. That’s all changed with Dyson’s nifty cordless DC59, but the AirRam is again a different proposition from hand-held vacs.

We didn’t hold back in our testing. We set it to work on the nylon carpet of a room that had just been prepared for painting. The carpet was covered with dust, pieces of plaster, nails and large scraps of wallpaper. This was a task that could cause blockages and damage to many traditional vacuums, particularly those with narrow hoses.

Surprisingly for a battery-powered product, the AirRam passed with flying colours. Not only did it manage to sweep and suck up the larger pieces, it also managed to pick up most of the dust and the small particles we were expecting it to miss because of the lower suction. 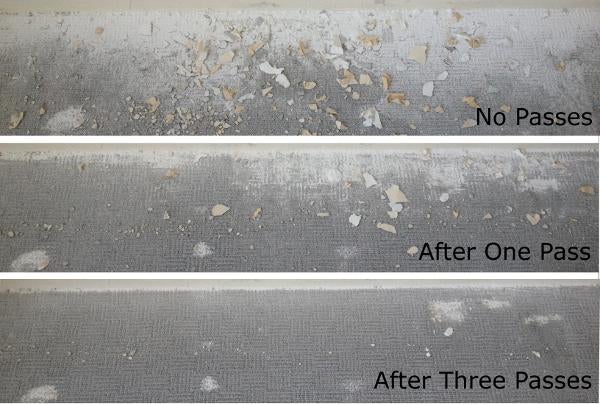 The Gtech AirRam powered through the nylon carpet test

If a piece it rolls over is too big to scoop up it rattles around the rotating brush, making it easy to remove by hand or to shake out. When this happens the AirRam gets very noisy, but at least you know there’s something stuck that you need to deal with.

The performance on smooth surfaces such as vinyl, wood and laminate is similarly impressive. We expected it to pick up bigger pieces of dirt, which it does very well, but it also did a thorough job with fine dust and powder. On these types of surfaces the AirRam’s brush actually propels it forward, making vacuuming light work. One slight issue is that it sometimes drops some larger pieces behind it so you need to go back and forth a bit more often than you normally would.

The only surface the AirRam struggles with is thick shag. Its lack of strong suction means it can’t pick up dust as well as a traditional vacuum can on this surface. If your house is covered in thick carpet you should look elsewhere, perhaps the Dyson DC50 Animal. 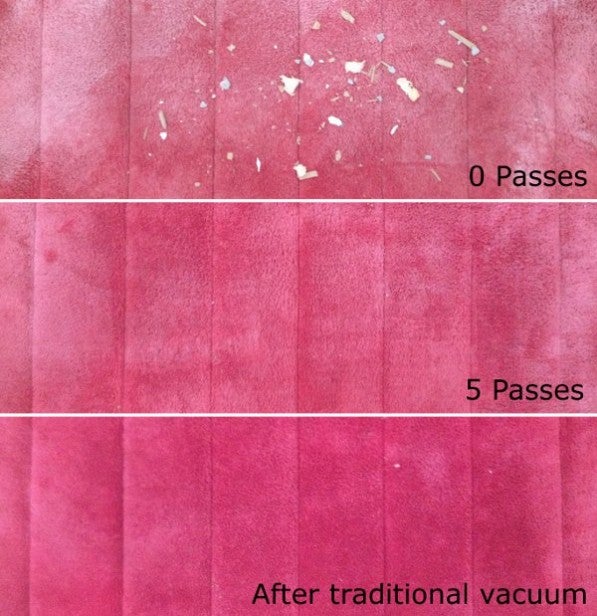 There are no attachments for the AirRam, so you won’t be able to use a hose to get those hard to reach corners or use it on furniture or curtains. Its profile is also means getting under couches or furniture that lies close to the floor could be a struggle if the gap is less than 5 inches. It’s a perturbing limitation for a £200 vacuum, but it is powerful enough to suck up dirt and dust stuck from edges, such as next to skirting boards, making it less of an issue. As we’ve already mentioned Gtech’s floor cleaner isn’t meant as a complete replacement for a traditional vacuum. It’s more for giving your pad a daily spruce, while a normal vacuum should be used when you want to get clean all the nooks and crannies.

A clever rotating mechanism lets you steer the AirRam with a simple flick of the wrist, as opposed to having to force the wheels to the left or right to get the angle required. A second handle half way down the shaft makes it easy to lift or vacuum stairs. 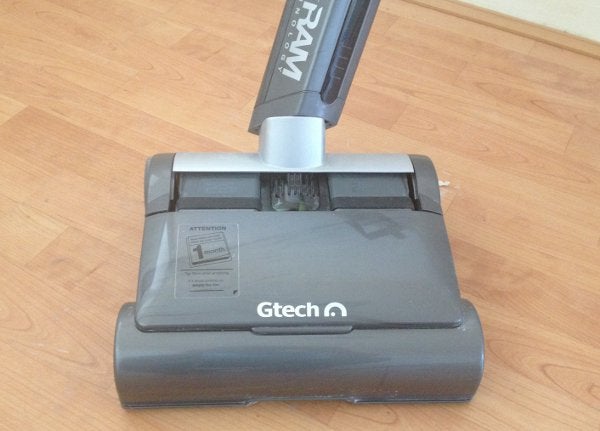 The key strength of the AirRam lies in the fact that it is battery-powered. Not dragging a cable around, or unplugging and replugging as you go, is a godsend. You’ll power from room to room with nothing impeding you other than the battery running low or it needing to be emptied and we see this as a key advantage for people who may struggle with heavy objects or have limited mobility.

Rather than use a bag or cylinder, the AirRam traps dirt in a compact plastic container. This lifts easily out of the base so it can be tipped directly into a bin. The rotating brush manages to compress dirt well, but you’ll still need to empty it more regularly than a bagged or traditional bagless vacuum, although the fact that it’s so simple to empty means that this is not a major drag.

There are two filters which stop finer dust from clogging up the motor. These are easy to remove using a coin and Gtech recommends they are cleaned by running them under a tap once a month. The rotating brush can be cleaned in the same way.

Gtech claims 40 minutes of battery life for the AirRam. In our tests it lasted for just over 31 minutes on a difficult floor with lots of debris, close enough to the 40 minute claim, and more than enough for a daily once over. Four LED lights in a panel on the front let you know how much juice is left, however this is a little imprecise as our AirRam ran out of steam while 2 lights were still on.

The most frustrating aspect of battery-powered devices, aside from how quickly they run out of power, is how long they take to charge. Gtech has considered this is and equipped the AirRam with ‘fast charging’. In our tests it took around 4 hours to charge from empty, which stretches the definition of fast a little but its much better than most stick vacs. Unfortunately, the AirRam can’t be used while plugged in but extra batteries are available to buy for £40.

One of the Gtech’s biggest and boldest claims about the AirRam regards its efficiency, 100W for 40 minutes of cleaning. Gtech claims the AirRam can pay for itself in five years based on 20 minutes of use a day with an energy cost of 14p per KWh, as compared to a 2400W traditional vacuum. While the cost of a KWh and 20 minutes of use are accurate, it should be noted that only the least efficient or most heavy-duty vacuums use 2400W. Most Dyson or Miele vacuums run between 800W-1500W although upright vacuums, such as those from Hoover, do run at 2200W-2400W.

The AirRam is still brilliantly energy-efficient, particularly considering its cleaning performance, but savings will depend on how much you vacuum. It’s good news for your carbon footprint, too, if that’s a concern.

You can calculate exactly how much you’re saving by plugging the AirRam into a PC (there’s no current OSX app) via a USB cable that can be ordered for free. In addition to power used, the software tells you the condition of the battery and even how many calories you’ve managed to shed while vacuuming. 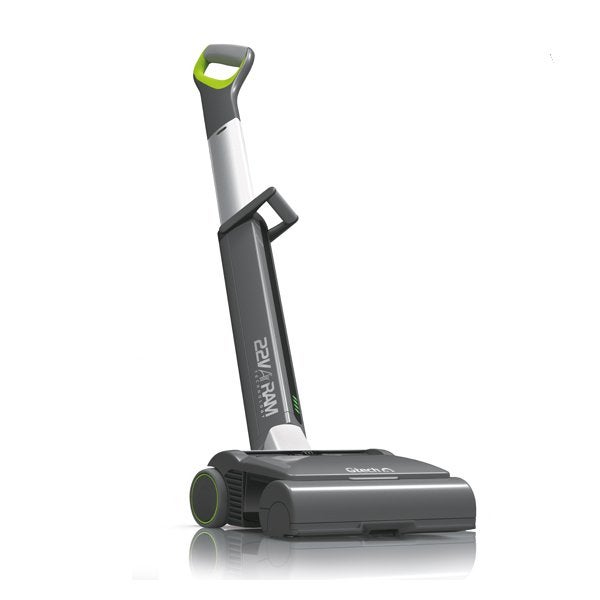 The AirRam is a good-looking vac and comes in white (version tested) and graphite (otherwise known as dark grey). It’s very simple to put together – the aluminium handle slots into the main stem and locks securely into place. Similarly the battery slides into the back with ease.

As we’d expect for a vacuum costing £200 build quality is good and the AirRam looks and feels solid, particularly the handle, brush and wheels. The lengthy five-year guarantee provides additional peace of mind.

At 3.5Kgs the AirRam is lighter than traditional vacuums, but heavier than most stick ones. If you have back problems or struggle with heavy objects then the AirRam is the perfect vac.

At £200 the AirRam isn’t cheap; it also isn’t as functional as other vacuums that come with multiple attachments or that can tackle thick carpet. But that’s not the point of the AirRam. It’s an addition to your cleaning aresnal not a replacement for a vacuum. It’s also good looking and easy to use and the efficiency means it pays for itself in the long-term.