Its job is to clean most of your floors most of the time, and it succeeds in that respect. It's a handy, convenient addition to augment your existing vacuum cleaner, not a replacement for it.

What is the Gtech AirRam Mk2?

When the Gtech AirRam launched in 2012, it was an anomaly. It looked like an upright cylinder vacuum cleaner, only it had the portability and cordless convenience of a “stick” vac. While it was too basic to take care of all your vacuuming needs, its sleek design made it an incredibly useful tool.

Four years later, the market is full of versatile cordless cleaners. Gtech has decided against sitting back, and now we have the AirRam Mk2. It’s had some significant upgrades, which make it a more useful floor cleaner. Additions include headlights, a clever new bin, plus a modified suction system that makes it easier to pick up dirt of varying size.

The concept remains the same: it won’t replace a proper vacuum cleaner with all the attachments, but it’s a useful and convenient second cleaner if you’ve got already got a good corded model. 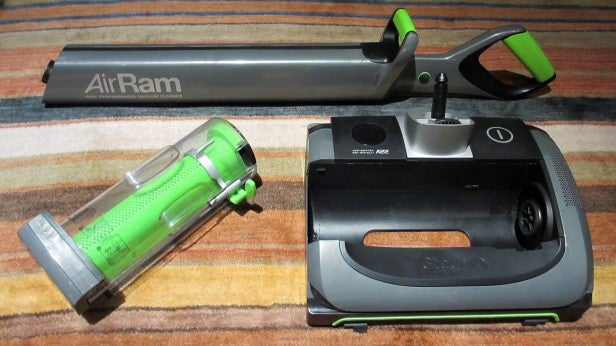 Gtech would like to compare the AirRam Mk2 to Dyson vacuum cleaners, but I don’t think that’s entirely sensible. They’re very different beasts. While Dyson makes upright vacuums and handheld stick vacs, Gtech has seemingly merged the two categories into a third option.

The AirRam is cordless, runs on batteries, and its 3.5kg weight means it’s lighter than most upright vacs. But that’s still heavier than the typical stick vac and it lives firmly on the floor. It also has no tools or attachments, either.

The AirRam is best described as an upright vacuum cleaner on a diet. I say “upright” because it stands up, but it works very differently to traditional upright rivals. There is no cylinder, for starters. Everything is packed into the base unit, where a motorised brush bar beats up dirt before a fan sucks it into the bin.

In this sense it’s not really a vacuum cleaner, since there’s no vacuum. Move the AirRam Mk2 about and you’ll notice there’s none of the powerful suck-down effect that you would find on, well, a vacuum. 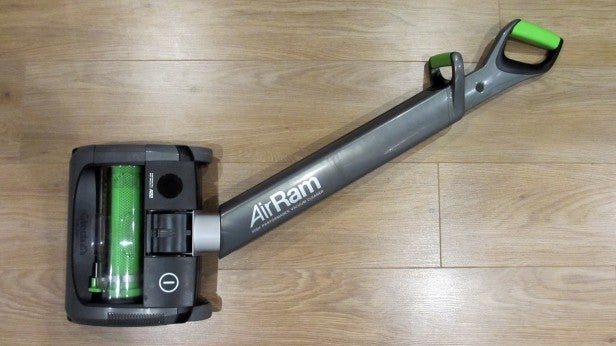 There are four wheels – two large ones and two tiny ones on the unit’s underbelly. Manoeuvrability is aided by the motorised brush bar, which is powerful enough to make the whole thing crawl forwards by itself. Push the AirRam Mk2 forwards on a hard floor and it will feel like it’s gliding. That’s great for anyone who doesn’t want floor cleaning to be a workout, which is something Gtech can boast over its competitors.

Going backwards, you’ll be met with a little more resistance. This is because of Gtech’s new AirLOC technology, which is a fancy way of saying the front has a clever little flap. It goes with the motion when you push forwards, but it flicks down and locks into place on the backstroke, creating a better seal.

The new bin is a curious contraption. It accounts for roughly a quarter of the base unit, and It has a snail-shell cross section designed to help compress dirt. Gtech claims the 0.8-litre bin can hold 2.4 litres of dust and debris.

What’s more impressive is the dirt-removal mechanism. Lift the bin out and you can use a little slider to eject bales of dirt. The idea is that you don’t need to get your hands all dusty every time – only when you pull out the filter for rinsing once a month. 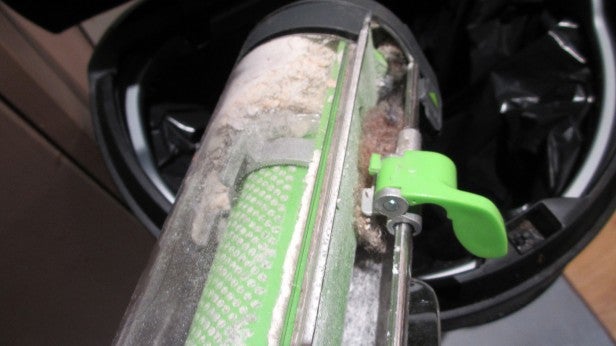 Elsewhere on the base unit is a foot-operated power switch and a removable battery block. Gtech claims a 40-minute running time from a four-hour charge, and my test results weren’t far off. It has four LEDs to indicate how much juice you have left, but they’re not very accurate – the AirRam Mk2 conked out even though there were two lights left.

Speaking of lights, Gtech has added headlights to this AirRam. While that might sound like overkill, it’s great for showing up debris you may have missed.

As for the “stick” part of the AirRam, very little has changed. It remains a telescopic pole with two handles – one to push it around, the other for carrying. I’m not sure why this pole is that chunky, and two handles feels like overkill. Still, it’s easy to assemble – you just slot it together and everything clicks into place.

Build quality is fine. The plastic body does feel a bit tacky, and the bin is a little flimsy, but overall the AirRam Mk2 feels sturdy enough to take on some chair legs. Just in case, Gtech will guarantee your vacuum for two years. 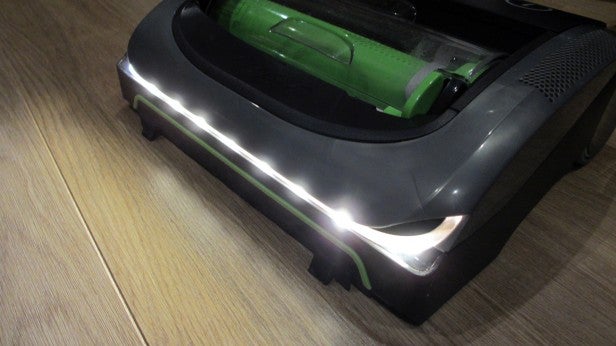 The original AirRam was better on carpet than it was on hard floors, but Gtech’s tweaks seem to have fixed that imbalance. Part of that is down to the AirLOC design, which is supposed to draw in bigger debris on the forward stroke, and finer dirt on the backstroke.

I started with hard floor performance, dropping a handful of porridge oats on my kitchen floor. Sure enough, the forward stroke took care of most of the bigger grains, but there were still plenty of finer bits left between the tiles. That’s fine, because a single backstroke sorted that out. 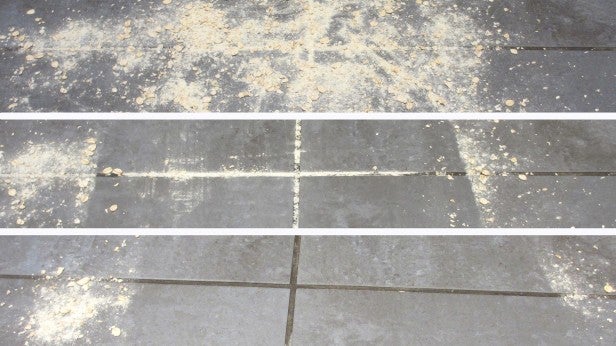 Next up, the carpet test. I threw down a few spoonfuls of baking powder (plus some oats for good measure) onto my deep pile rug. As before, the forward stroke sorted out the bigger chunks, but there was plenty left. The backwards stroke was much better at picking up the powder.

It wasn’t clean, however – the AirRam Mk2 seemed to press some of the powder into the rug, and it took three to four reps to rid the rug of powder. Total cleaning time took less than 10 seconds – not bad, but not as good as best from Dyson and Bosch. Fine powder aside, the Gtech had no issues grabbing crumbs or fine hair. 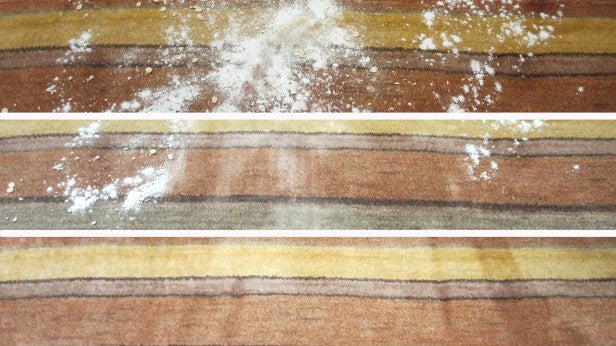 The AirRam Mk2 does have a slight tendency to push around bigger bits that don’t fit under the flap on the first pass. It seems the machine relies on running over things to pick them up – because it lacks suction power, it’s not as good at handling dirt it can’t run over.

Crucially, this means edge cleaning performance isn’t amazing. I moved a bookcase to get at the dust that had gathered behind for the last year, and while the AirRam Mk2 was able to shift most of it, there was a clear line of dust left hugging the skirting board. Maybe more suction would help, but there’s no option to adjust power.

This calls for some edge and crevice tools, but the AirRam Mk2’s design means tools aren’t an option. Gtech does sell the Multi, a handheld vacuum cleaner armed to the teeth with tools and pitched as the AirRam’s ideal companion –  but that costs £150. You can buy the AirRam Mk2 and the Multi together and save £50, but even then you’re dealing with two separate devices, with two batteries to be charged.

It’s here that the Gtech’s rivals have an advantage. Dyson, Bosch and Vax offer all-in-one cordless vacuum cleaners that can handle open floors as well as tighter spaces. 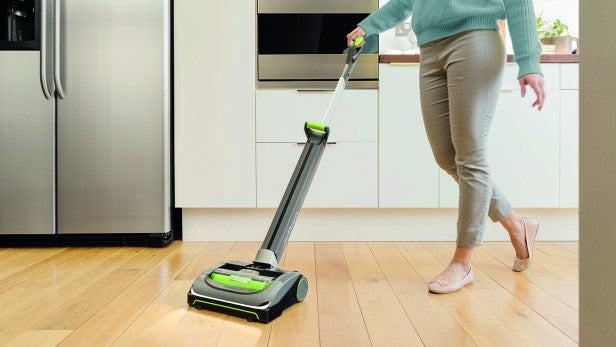 Should I buy the Gtech AirRam Mk2?

The Gtech AirRam Mk2 builds on the original’s ideas with some useful additions that make it a better tool in general. The headlights are cool, the new bin’s dirt-ejection mechanism is handy, and the AirLOC design is an effective way to improve performance.

The competition is tough, however – tougher than when we first reviewed the original AirRam. The Dyson V6, for instance, offers superior cleaning and flexibility for around £50 more. The Gtech does offer longer battery life with a motorised brush bar – up to 40 minutes versus the V6’s 17 to 20 minutes – but the Dyson has tools for cleaning your sofa, curtains and plenty more besides.

Then there’s the Bosch Athlet BCH652KTGB, which can be had for similar money, but it beats the Gtech on bin size and battery life. The Bosch also offers adjustable power and tools for different vacuuming styles. Another option is the excellent Vax Air Cordless Lift, which is also £200 and more versatile.

Compared to these rivals, the Gtech AirRam Mk2 is clearly not a flexible, all-in-one cleaning machine. It does one thing, but it does that pretty well.