Grundig’s top-of-the-range tumble dryer uses cutting-edge heat pump technology with the view to reducing the electricity running costs of these power-hungry appliances. Heat pumps can use as little as a third of the power of an electric heater for the same heat output, so the savings should be great. This condensing model has a water tank, so doesn’t require external venting, and uses sensor technology to measure the weight of the load and the moisture.

To match its high-tech heart, the GTN38240GCW offers a generous 8kg load maximum capacity – although much less is recommended depending on program – 16 programs to cater for the widest variety of materials and touch controls with LED displays. This premium-priced machine comes with a 5-year manufacturer’s guarantee, too. 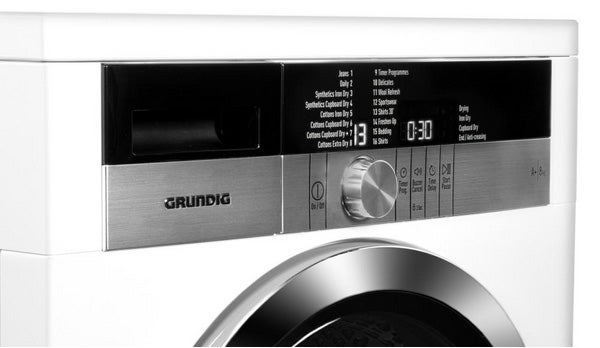 The black and silver fascia is a good match for Grundig’s top-spec washing machines and mixes gloss black plastics with stainless steel trim and buttons. Like the washing machines, the finish did demonstrate a Sherlock Homes level of tenacity for finding fingerprints but were fairly easy to clean afterwards. The two bright displays show the program number (as identified on the fascia) and the time remaining of the cycle, counting down as it progresses.

Stuffing up to 8kg of wet washing into the machine is made easy with the exceptionally large port-hole door opening, which is slightly truncated at the bottom where the fluff filter is housed. This simply lifts out for a quick clean, preferably after each drying cycle. Unusually, the door is a tinted see-through affair, which allows you to watch your washing drying if that’s your thing. 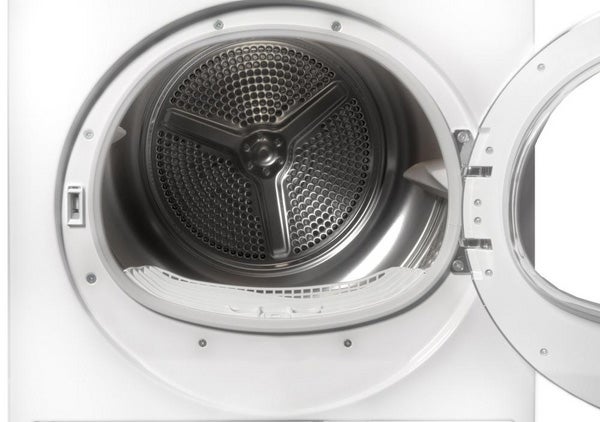 Like all condenser tumble dryers, this Grundig dries clothes using hot air and condenses the moisture out of the damp air into a plastic container that will need emptying every few loads. If you have nearby access to a waste water pipe, the machine comes supplied with a small hose allowing the condensated water to be pumped out directly. The container is located much like a washing machine’s detergent drawer and pulls out cleanly for easy emptying.

At the bottom of the machine behind a kick plate, the condenser unit has a foam filter to catch any fluff and lint that has escaped the clutches of the in-door filter. This sponge filter should be washed by hand periodically, but was still fairly clean after our three test loads so this will only be an irregular chore.

With the sensor technology there is no need to set a specific load weight, but the program list encourages you to group together similar textiles for best results. You simply choose how dry you want your clothes (extra, cupboard or iron dry) and start either straightway, delayed for use of low-rate night time electricity or by timer. There are indicators for progress, child lock on the door, filter cleaning, water tank emptying and filter foam cleaning, so you should never miss any required maintenance.

The Grundig does not claim to be quiet, and it isn’t particularly, but it’s not as bad as its own EU energy label suggests. While the big sticker says the GTN38240GCW outputs around 66dB of noise, we rarely measured more the 62dB average with just a few higher blips as the pump kicked in to expel water from the condenser to the tank.

Around 60dB is about that of conversational speech, so while the Grundig is not overly intrusive it still makes its presence felt in the kitchen or utility room. The noise is somewhere between what most of today’s washing machines achieve when washing (quieter) or spinning (noisier). 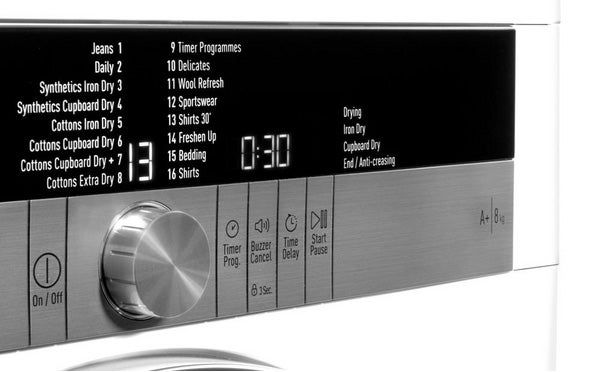 Grundig GTN38240GCW – What programs does it have?

The Grundig’s 16 programs separate clothes more by lifestyle choice than actual material. The main options include jeans, sportswear, bedding, delicates, wool and the enigmatically titled ‘daily’. This is given over to a mix of cottons and synthetics found in typical everyday clothes. We found the Shirt 30 program particularly useful as it will dry two cotton shirts to iron-ready in under 30 minutes.

The main cotton and synthetics programs offer different levels of dryness; Iron Dry (slightly damp and ready to iron), Cupboard Dry (dry enough to be folded or hung up straight away) and Extra Dry for a ready to wear drying. Just to add a further option / layer of confusion, there is also a Cotton Cupboard Dry + program, which despite reading the manual several times and trying it out, seemed almost identical to Cupboard Dry.

The stated load of tumble dryers is more a benchmark of its overall size than an absolute capacity and recommended loads are usually a fraction of the maximum stated capacity. For example, Grundig recommends 4kg for sportswear, jeans and the daily load, 2.5kg for bedding, 2kg for delicates and 1.5kg for wool and shirts. 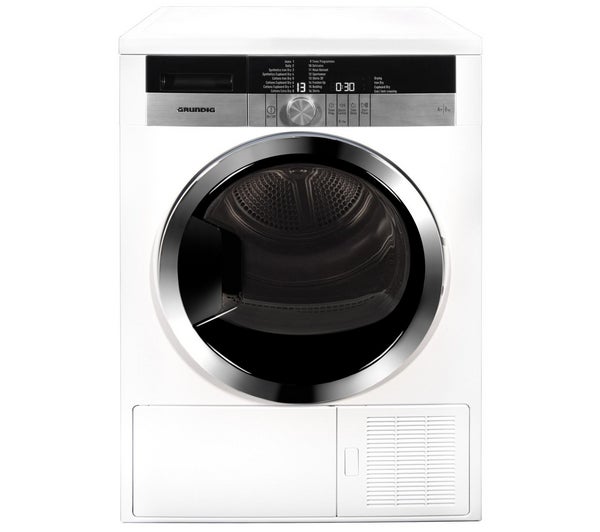 We test tumble dryers over three individual cycles. The first is a 1kg (dry) mixed load, typical of a light load users want to dry quickly. This comprises cottons and synthetics on what amounts to the machine’s default or standard program, and aiming at a ‘cupboard dry’ state of dryness. That is somewhere between a slightly damp state that would be good to iron and the extra-dry/ready-to-wear with no measurable moisture.

The second load is more of a challenge and equates to how most people use tumble dryers. This comprises 50% of the maximum capacity (dry weight) of clothes to cupboard dry. The final test is dependent on machine and is for special programs, in the Grundig’s case the Shirt 30 program.

While the heat pump technology is certainly efficient, it is a long way from being quick. Only the Shirt 30 program finished in a speedy time – although as that was just three shirts it was hardly an epic challenge. The 1kg load took a lengthy 1 hour 45 minutes and the resulting load had around 30 grams of moisture (3% of load) left after drying – about right for cupboard dry.

The 4kg dry load went into the machine with the best part of 2kg of water embedded in the washing, making this a challenging dry cycle by any standards. It was a long dry time at 3 hours and 14 minutes and the clothes came out perfectly dry with under 1% moisture left. We felt that was over-dried for the cupboard dry setting and the knock-on effect was that t-shirts and other pure cottons emerged from the drum very creased.

The Shirt 30 program seemed an energy extravagance for drying just two cotton shirts, so a third got added for good measure. The programme was done in just 23minutes with around 5% moisture (by weight of washing) left in the laundry. The shirts emerged hot a steamy with very few creases, ideal for ironing and perhaps wearing almost straight away. If you really must wear that one shirt or blouse, and you are pushed for time, this is a very effective program. 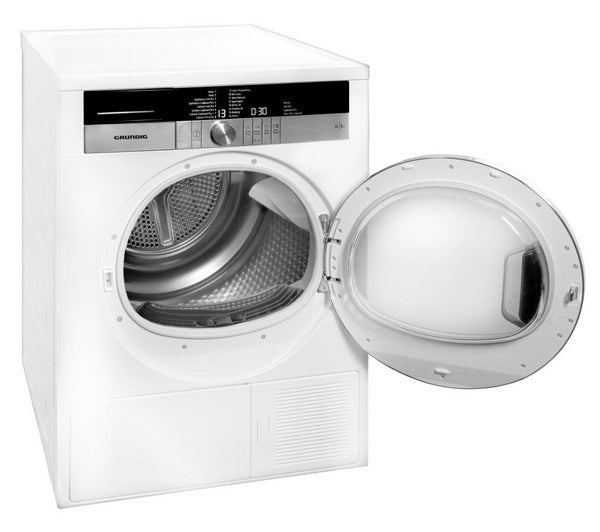 Tumble dryers account for the largest energy consumption per load of all major domestic appliances, so you need to be fully aware that even the most efficient will cost a whole lot more to dry your clothes than hanging them out or over a clothes airier in the home. That said, the Grundig’s heat pump technology is fabulously efficient with energy usage and does indeed use a fraction of the electricity of traditional condenser tumble dryers.

The 1kg load used around 0.68kWh (around 10 pence), the soggy 4kg load just 2.5kWh (38 pence) and the Shirt 30 program just 0.25kWh or less than 4 pence. Over the course of a year and multiple uses these will add up significantly, but far less than traditional electrically heated dryers. If you run 2-3 50% load cycles a week and a small load cycle (for urgent drying) every other week, this machine would cost you just under £50 a year to run. That is less than half the cost of most traditional (non heat pump) condenser tumble dryers.

If you are a frequent tumble dryer user the Grundig’s excellent energy efficiency may well bring significant payback on the highest asking price over the life of the appliance.

Should I buy the Grundig GTN38240GCW?

The Grundig GTN38240GCW is not the quickest or quietest condenser tumble dryer on the market, but its heat pump technology certainly brings down the usually astronomically high running costs of these machines to a more reasonable level. What you pay for the machine and how much you use it will be the deciding factor as its drying performance is generally excellent.

A very decent dryer that’s much cheaper now than when it first launched, making it good value too.