With Gravel, there’s a real feeling of a team set loose from the strictures of licensed game development and freed to tackle the off-road racer of their dreams. Italian studio Milestone has been developing racing games for over 20 years, but it’s spent much of the last decade building games around the FIA World Rally Championship or star drivers like Sébastian Loeb.

The odd thing is, though, that the off-road racer of its dreams appears to be the one that everyone else was knocking out circa 2012.

We’re talking fantasy tracks, make-believe physics and fireworks as you burst over jumps. We’re talking an old-school career mode punctuated by one-on-one boss races, with a side order of chunky racing trucks. We’re talking tough-looking rivals with video intros, a bizarre commentary and a deeply dodgy hard-rocking soundtrack. Bar the visuals, Gravel feels like a homage to the Ken Block and Travis Pastrana era of Codemasters’ DiRT franchise, and (frankly) the visuals aren’t that big a departure.

In a market dominated by more serious sim-style racers, however, this isn’t necessarily a bad thing. Gravel’s simple, straightforward style has its own appeal. The game’s heart is its Off-Road Masters career mode, where you join a fictional televised off-road racing league, based around five cross-country and track-based disciplines mixed up with five different styles of racing. Each part of the season covers three different series of events culminating in a trio of head-to-head races against a master. Get through the Stadium Circuit, Wild Rush, Speed Cross and Cross Country masters, and you can tackle the bestest, baddest off-road racer of them all. 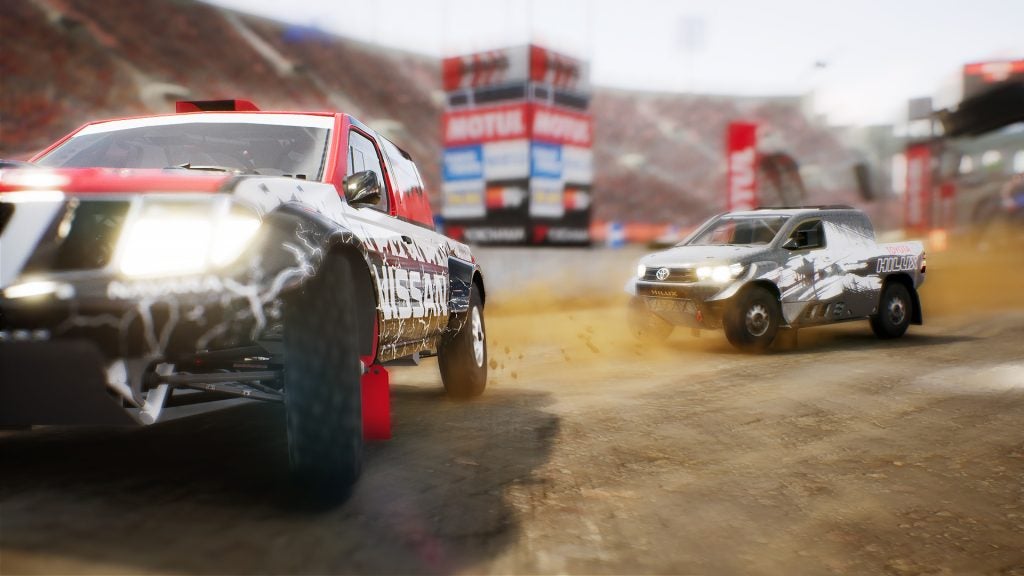 The majority of these events will be straight-up lap and checkpoint races, but Gravel finds time to slip in a few other styles, even if none are exactly original. Time Attack is pretty much what you’d expect, while Elimination is the old chestnut where the racer in last place when the countdown finishes is eliminated until only one is left. Smash Up is the weirdest, pushing you to drive straight through one of three or four barriers, depending on whether it’s marked with a green arrow or a red cross. As the displays roll over like a fruit machine until you’re on your final approach, the point appears to be to keep you on your toes.

There’s some variety in the tracks as well, with a selection of mud-filled monster truck arenas and rain-slicked tarmac tracks balanced by excursions through the wilds of Alaskas, the deserts, shores and canyons of Namibia and some entertaining alpine and coastal courses. All of the 16 tracks have several variations, while night events and hostile weather make even those tracks that grow familiar seem strange and risky once again. In fact, the weather effects are some of the best things about Gravel, wrecking your visibility, transforming the handling and adding a thrilling sense of danger to the racing.

Curiously, the career runs on two different currencies. On the one hand, you unlock events by scoring stars in previous events, and while you might expect these to be dished out for getting podium finishes, they’re actually rewards for meeting a specific objective, sometimes coming first or third but also simply finishing the race. On top of this, you level up to collect new motors and new liveries, collecting experience points for stylish racing with lots of drifting, jumping and driving at ludicrous speeds. To be honest, you won’t win any races without doing the latter stuff anyway, but at least the game encourages you to race like a maniac rather than play things safe. 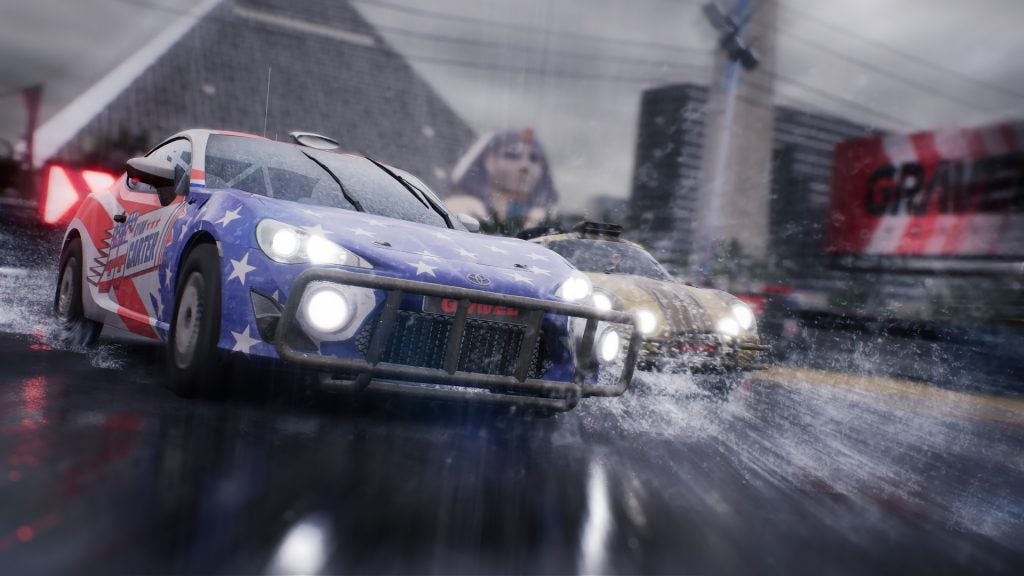 As for the cars, Gravel doesn’t score high for quantity, but the cars it does pack in are fun to drive, with seasoned off-road favourites like the Mitsubishi Lancer, Subraru Impreza and Ford Focus RS matched by vintage classics – the Fiat 124 Albarth Rally, the 1993 Toyota Celica, the Lancia Delta – and a mix of quirky hatchbacks, SUVs and 4×4 beasts. It has to be said that these aren’t the most detailed recreations you’ve ever seen while the interiors shown in the cockpit view would struggle to be any more generic. All the same, the car list has character.

Now, however, things are going to get nasty. Visually, Gravel is a bit of an oddball. Some of the scenery and lighting is nice enough, with some gorgeous water and reflection effects, but the cars look cruder than in most modern racers. It’s all too clear where the Unreal 4.0 engine starts culling detail to keep the frame rate high, and high-res textures sometimes arrive late to the party, popping into place a few seconds after the object they’re theoretically attached to. Something weird is happening with blur effects as well. Sometimes the whole scene looks beautifully crisp and sharp, while at other times someone appears to have rubbed Vaseline on the lens, leaving your vehicle in soft focus, along with most everything else.

The handling is okay, particularly if you dial down the usual steering assists, but the physics when vehicle hits vehicle or hard object can be bizarre, with strange flips, turns and sideways pushes a regular occurrence. The AI meanwhile, runs from dull and slow at the lower AI levels to mindlessly aggressive at the medium to high-end, though the aggression seems to be more about holding the racing line at all costs than actively gunning for your bumpers. 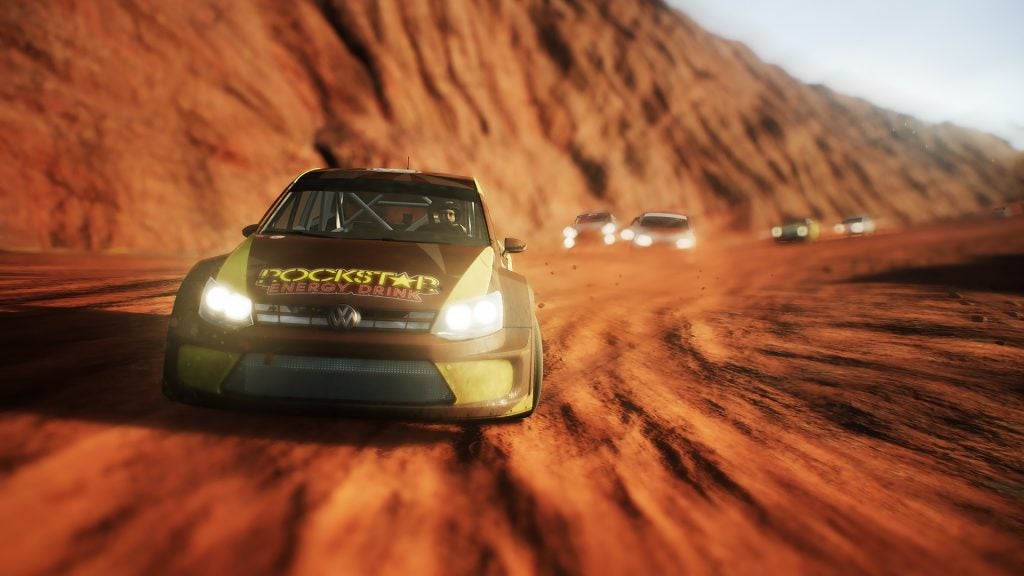 In some ways Gravel feels unpolished or under-resourced. For instance, finish one event and you’re never taken to the next logical event, but back to the main Off-Road Masters menu with a completely different, irrelevant event in the centre of the screen.

Still, that’s far from the oddest thing about Milestone’s latest. The pre and post-race commentary is the stuff of Internet meme legend; repeated ad-nauseum, badly written and delivered with both have-a-go enthusiasm and, simultaneously, a complete lack of conviction. ‘Let’s enjoy this race together and don’t be sad’ he entreats at one point, like someone who might have enjoyed something at some point, but isn’t quite sure when or what that might have been. ‘If you didn’t faint watching this race, you’re used to strong emotions’ he exclaims almost plaintively at another, perhaps not having experienced any in the last decade.

I experienced some while playing Gravel, but they weren’t always pleasurable. The Smash-Up events don’t really work – the size of the barriers and the way they’re placed makes it a trial and error experience, and it’s the one event where you don’t get a handy race-recovering rewind feature. Meanwhile, the boss duels are the one area where the difficulty curve seems to go awry, with each master pulling far ahead early in the race unless you neutered their AI, at which point you wonder why they bother turning up at all. 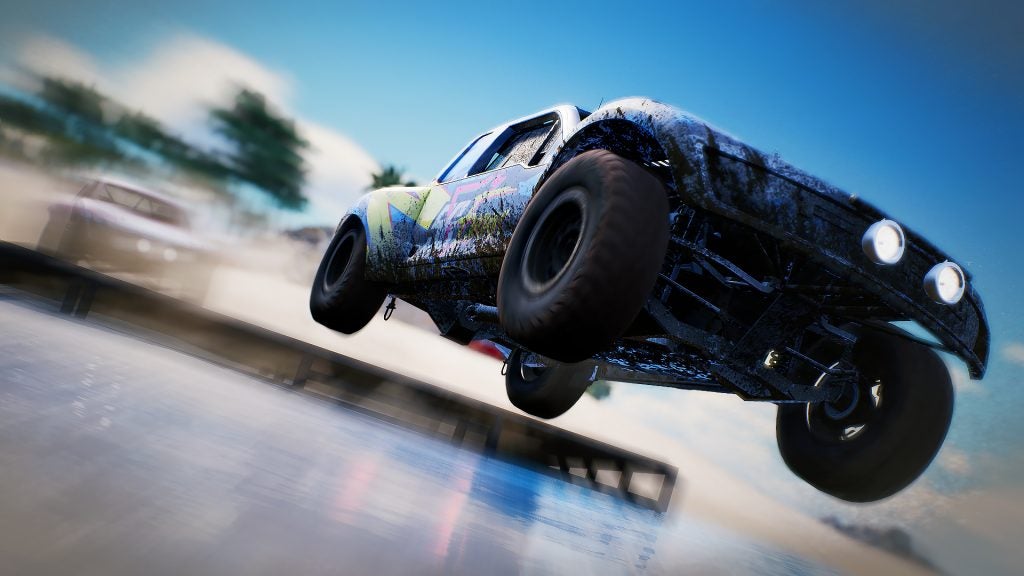 Despite all this – the smudgy visuals, the dodgy physics, the dated structure – Gravel manages to be fun. There’s something simple, dumb and unpretentious about its racing action, not to mention a great sense of speed. It isn’t trying to be a massive multiplayer thingamajig or a go-to racer for all your car-crazed friends. There’s no attempt to flog you extras or give you anything beyond a basic career mode, custom races and weekly challenge events. The multiplayer mode, too quiet for testing before launch, seems the most vanilla effort imaginable. All the same, the actual core experience of speeding, sliding and splattering mud is more addictive and engaging than I expected it to be.

That doesn’t mean, though, that it’s worth your hard-earned money. It might be kind of entertaining, but there’s nothing Gravel does that other games haven’t done better, sometimes many years before. For my money, MotorStorm and its sequel delivered a better feel for tyre meets mud and gravel. The Flatout series gave us bigger dumbass muddy thrills. Even now, the Forza Horizon games give you better-looking, more convincing off-road action, while DiRT4 has Gravel beat across the board. That doesn’t mean there’s not space for a less serious alternative, but Gravel isn’t there quite yet.

Gravel is fun enough as an arcade off-road racer, but it feels like it was designed to compete with the hits of five or six years ago, not the racers of today. While there’s something likeable about its no-nonsense, rough-and-tumble action, it lacks the poise, power and polish of a mud-flinging, tyre-spinning champ.