Don't mistake the Silver for a Hero 7 Black minus a few features – its 4K footage isn't as good as GoPro's flagship. This means it's more like a Hero 7 White that can shoot 4K video, with the same simplified interface and minimalist design, plus GPS and an enhanced photo mode. It's a very solid point-and-shoot action camera, but if you can stretch to the Hero 7 Black or DJI Osmo Action then they're well worth the premium.

What is the GoPro Hero 7 Silver?

The GoPro Hero 7 Silver is the middle bear in its three-strong action camera family. But this middle-ground pick isn’t necessarily the GoPro sweet spot that it might appear to be.

While it has the 4K resolution capture that’s missing from the GoPro Hero 7 White, the GoPro Hero 7 Black offers better dynamic range and features that advanced shooters will be looking for, such as a removable battery and external mic input. 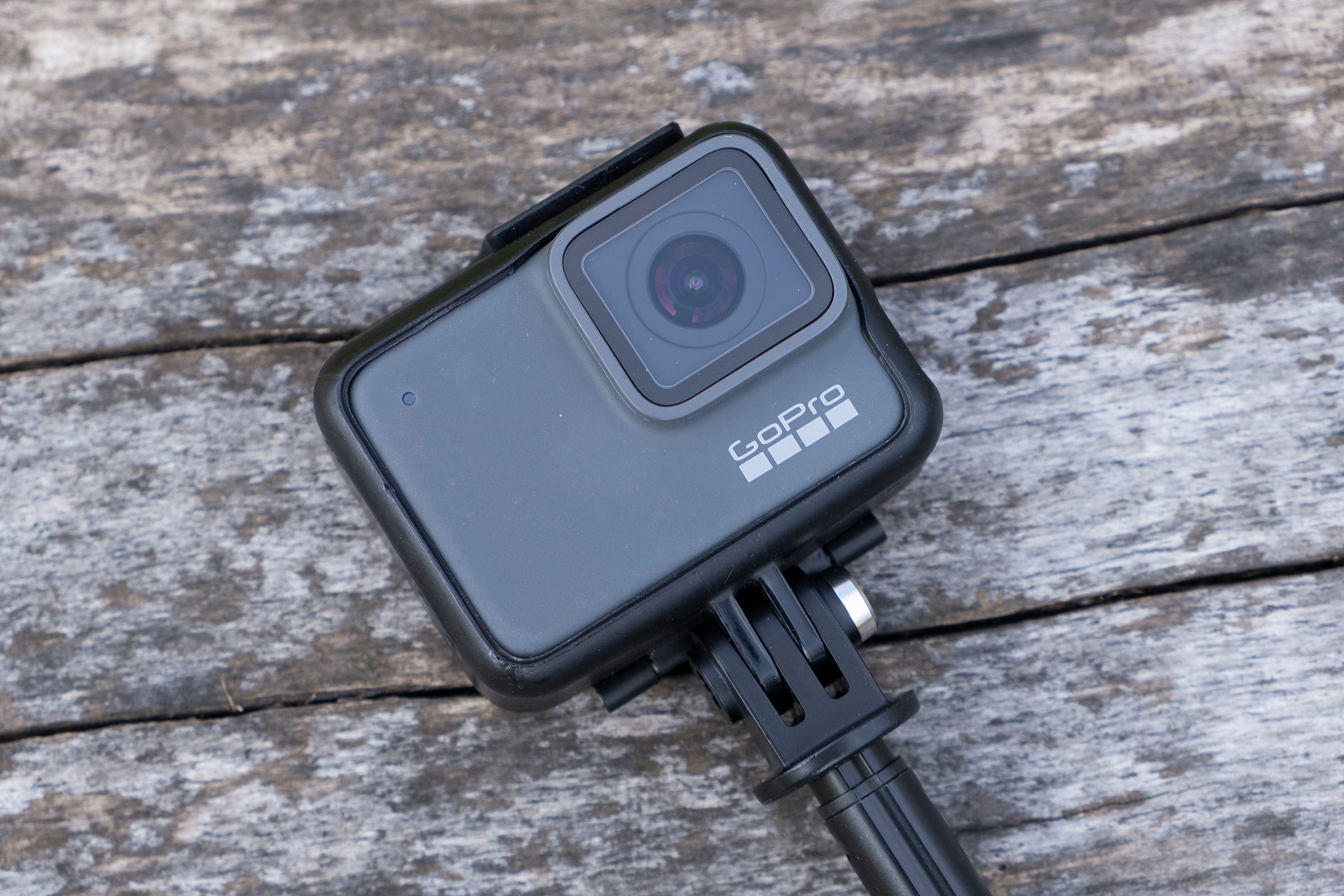 Since it costs £279 RRP, the hop up to the Hero7 Black (or the cheaper DJI Osmo Action) is advisable – although when did you last pay the RRP for an item anywhere but the supermarket? The GoPro Hero 7 Silver is a good buy at £220, its online price at the time of review.

GoPro’s design hasn’t changed much since 2016’s Hero 5. These action cameras are about as recognisable as an iPhone – why throw out an iconic look?

The GoPro Hero 7 Silver is a tiny-but-chunky brick of plastic; its fairly regular shape purpose-built for mounting. It doesn’t require much space, and can attach to just about anything with the right adapter.

You don’t get all such items in the box, of course. The GoPro Hero 7 Silver includes a mount housing and a couple of adhesive mount pads. You can easily spend a GoPro’s worth on accessories, but most people will be happy with one or two extras. 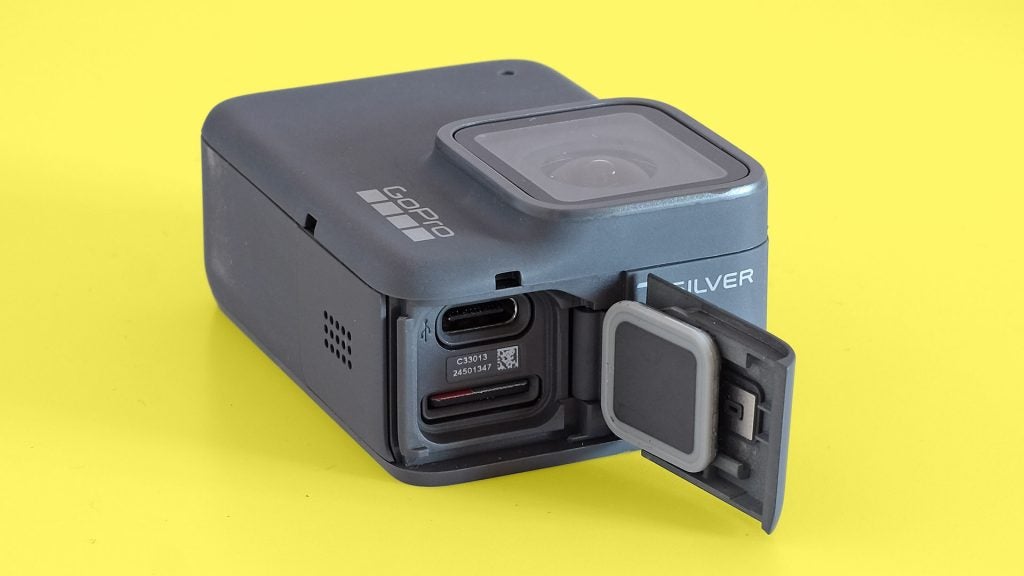 The GoPro Hero 7 Silver also has perhaps the most important outer hardware feature of the Hero 7 Black: it’s water-resistant to a 10-metre depth (10-ATM). You can take this camera on a snorkelling holiday without the need for a separate housing. And if you do want to dive, rather than mill about on the surface, GoPro makes a Super Suit case that bumps the depth resistance to 60 metres.

The breadth of GoPro accessories, first and third party, is a good reason to pick one of these cameras over a cheaper action-cam alternative.

A front screen, seen on the Hero 7 Black, is the first feature missing on the Hero7 Silver. Instead, you get an LED light that comes to life when the camera is in operation. If you want to shoot solo, using an action cameras “selfie” stick, the extra data the Black’s screen offers is handy. However, its omission isn’t likely to be an issue for cyclists or those planning to strap one of these to a dog. 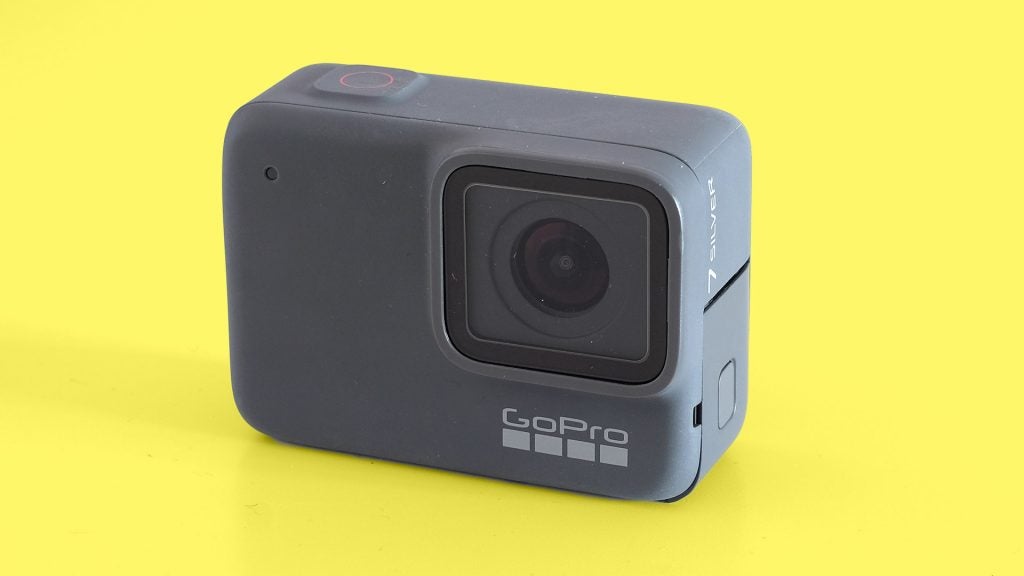 The the Hero 7 Silver isn’t made for long vlog sessions, mainly down to the lack of a non-removable battery. You charge the device over USB-C, as you would a current smartphone,. If you want to get remotely serious about action-cam footage then you’ll likely want a hot-swappable battery such as that included with the GoPro Hero 7 Black.

The Hero 7 Silver’s battery lasts for around two hours of straight shooting, but you won’t get that much footage on the microSD card if you take shorter clips here and there across a day. Every second the rear colour display is lit, it saps power.

Opting for a sealed-in battery likely makes the water-resistance easier to achieve; it means fewer rubber-sealed mechanisms. But nudging the true enthusiasts towards the higher-end model also makes good commercial sense for GoPro. 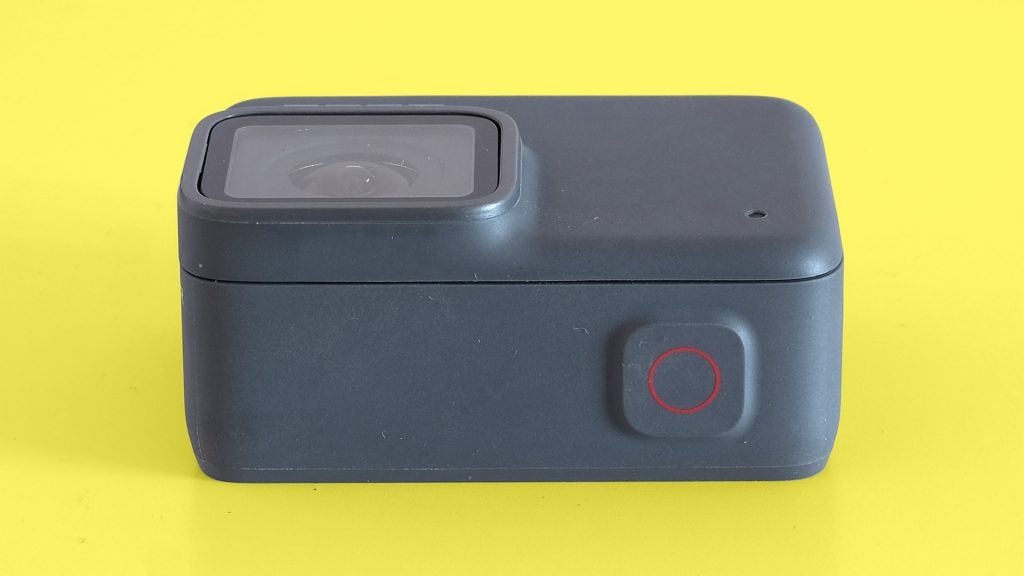 The sense that this action camera is for hobbyists rather than “serious” videographers continues when you turn on the GoPro Hero 7 Silver camera.

Its interface is much like the White version – you have only a few options at your fingertips. While there isn’t much in the way of “jargon”, there’s also limited control.

Until you dig into the Settings menu, your basic choices are 4K or 1080p (1440p at 4:3 aspect) and photo, video or time-lapse. Those who opt for this instead of the Hero 7 Black that they really want may find the Silver a little too basic. Nevertheless, it keeps things nice and simple. It shows up what the Silver really is: a GoPro Hero 7 White with 4K video capture. 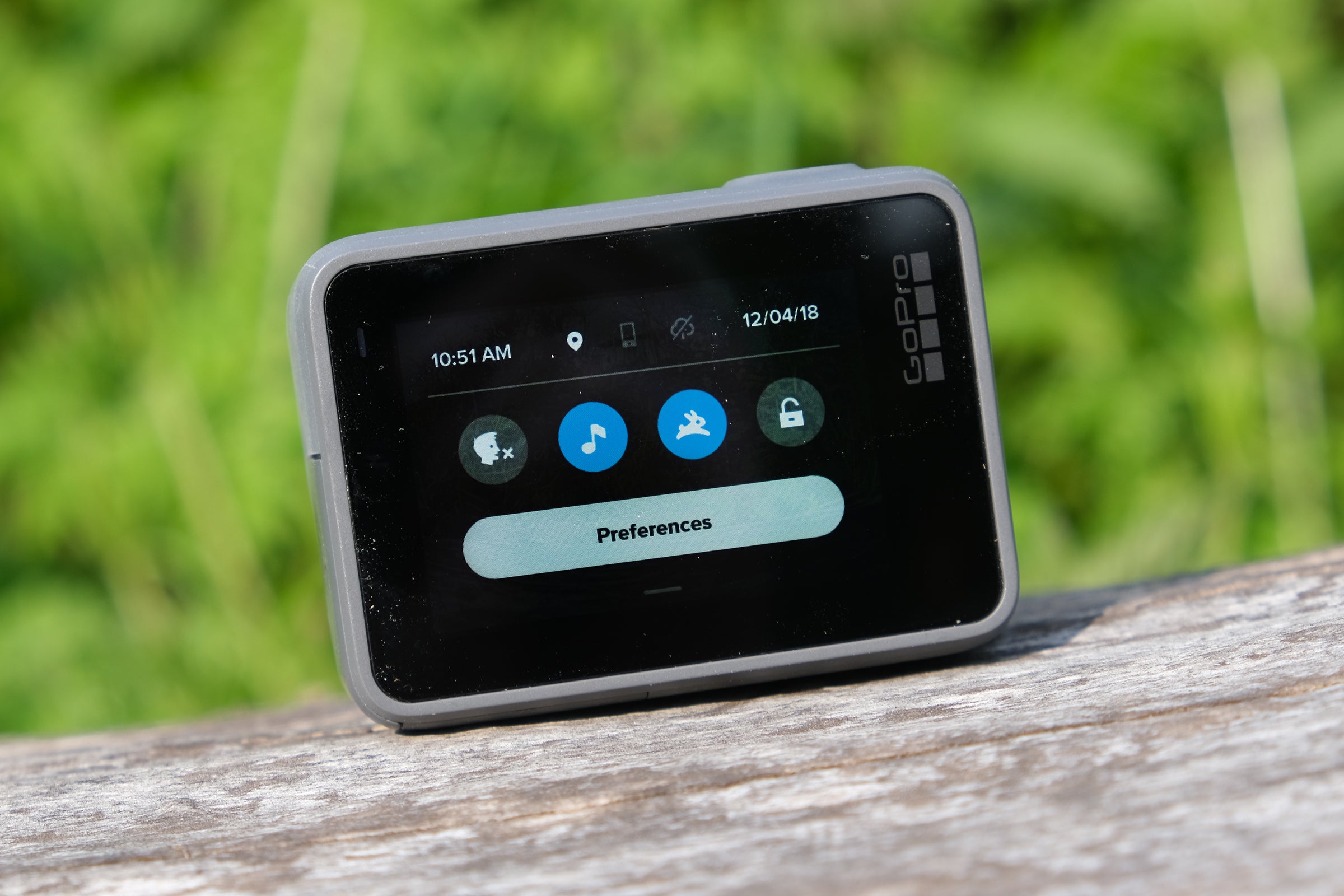 Like that cheaper model, the interface can feel sluggish. There’s a degree of latency to every action, which may jar if you have a good phone and expect that level of responsiveness. This isn’t something the DJI Osmo Action suffers.

Still, once you get used to the Hero 7 Silver’s operation, you’ll find it’s up to the job. Press the shutter button from its “off” state and the GoPro Hero 7 Silver turns on and starts shooting video immediately. This is how you’ll probably use the camera if you want to capture intermittent moments of action rather than, say, a cycling trip.

You can also operate it using voice commands or via a mobile app. The voice prompts don’t work from standby, though, as they do in the GoPro Hero 7 Black.

Advanced frills aren’t included here. But if you’re looking for an action camera to capture the occasional fun moment, you may not notice their absence. 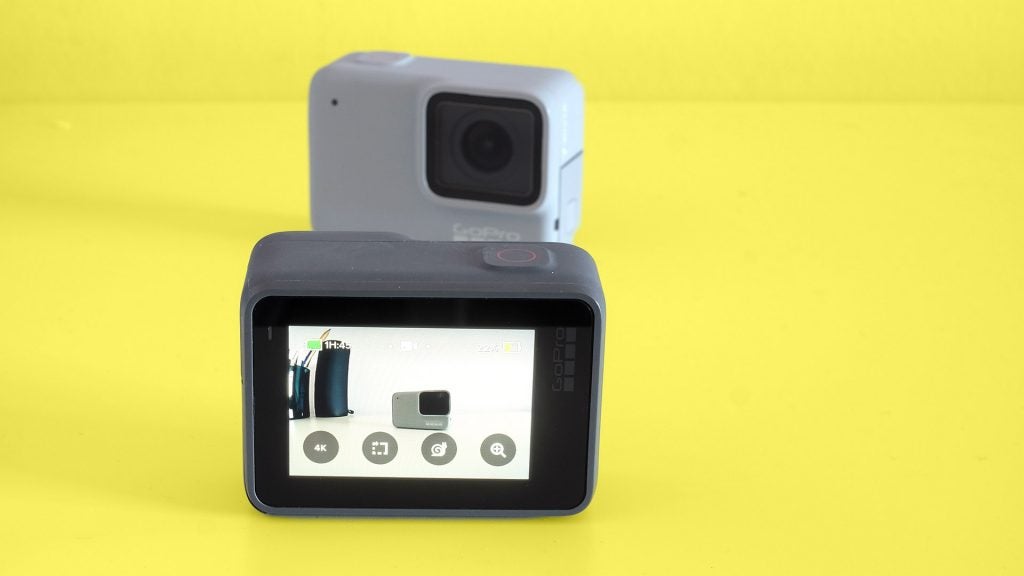 The GoPro Hero 7 Silver has an effective resolution of 10 megapixels, just like the Hero 7 White. But 4K video capture is the big difference here.

There are two important image quality questions. Does 4K add enough detail to justify the upgrade? And how does it compare to the Hero 7 Black’s 4K video?

Good news: the GoPro Hero 7 Silver’s 4K mode yields significantly more detail than 1080p/1440p. Full HD footage has the look of video produced with pixel binning, where detail is to an extent limited by the pixel count rather than sensor quality (in good lighting, at least).

The character changes in 4K mode, which likely uses just about the full resolution of the sensor when stabilisation-related cropping is considered. 4K video has lower contrast, which may be a tactic used to retain mid-tone detail. More important, fine detail can look dithered or vague, which turns some finely knit textures into mush. 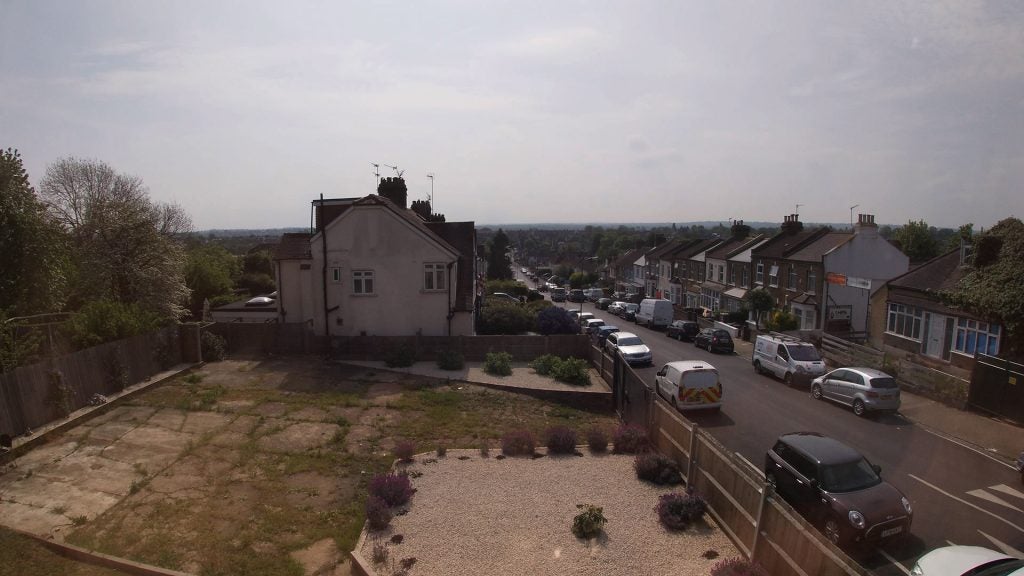 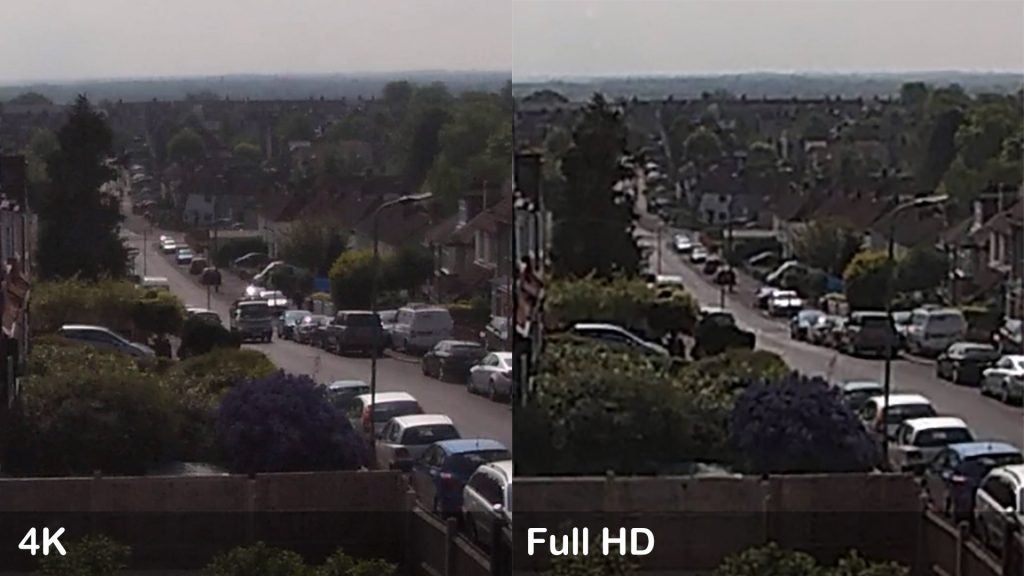 A zoomed crop of the image above

It’s a sign that the GoPro Hero 7 Silver’s sensor is stretched by 4K video. Does it matter when I have to dig into pixel level and beyond to show this up?

On one level, not necessarily. The GoPro Hero 7 Silver’s 4K footage looks great in daylight. It’s a real upgrade over the 1080p of the White.

Put it next to the 4K of the Hero 7 Black, however, and you’ll quickly realise that not all 4K footage is equal. The Black has substantially better dynamic range, contrast and sharpness. Even at 1x the Black’s video looks more vibrant, punchier and brighter. 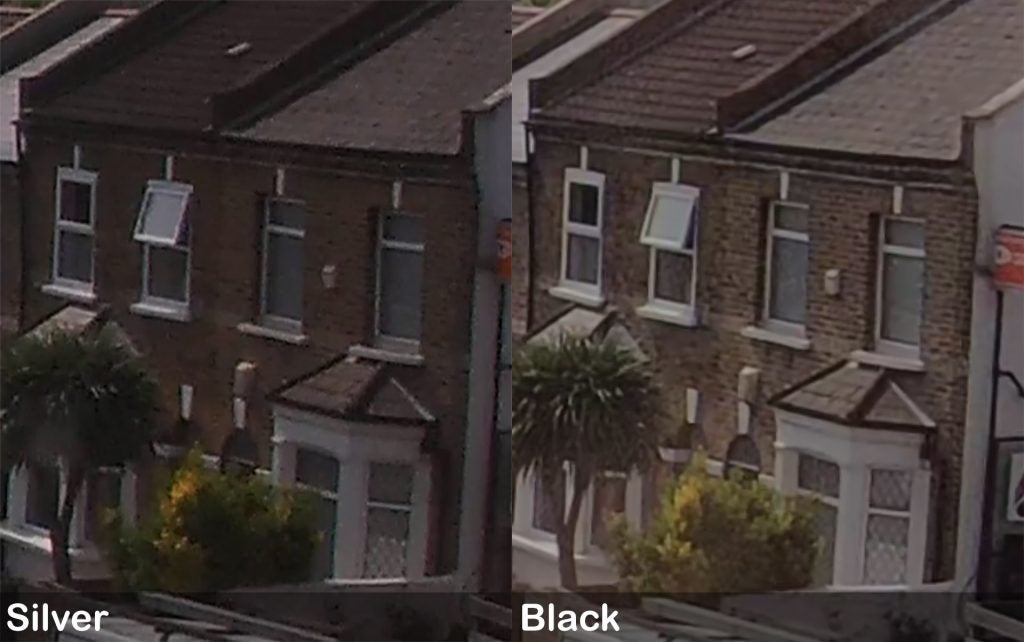 This is a comparison crop from the scene above 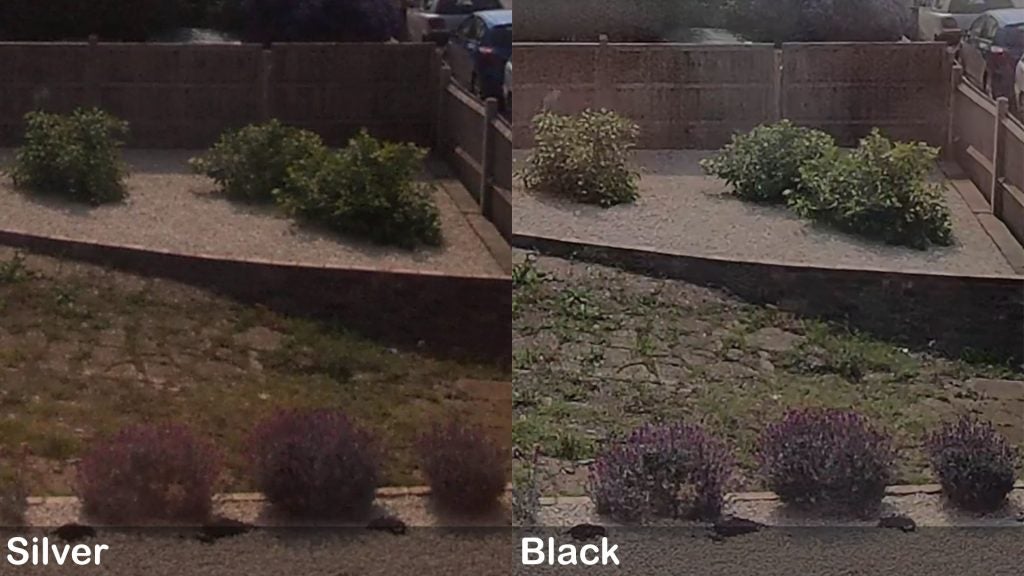 This is aided by the Black’s cooler colour temperature, which isn’t always a positive trait. But the main takeaway is that the Silver doesn’t match the Black for video.

Stabilisation is similar to that of the GoPro Hero 7 White. It’s effective, using software-based methods to smooth out the bumps when you run, walk or cycle. However, it still shows some of the geometric distortion seen in the lower-end White. This isn’t a surprise, since they likely use exactly the same techniques

The higher-end GoPro Hero 7 Black has a HyperSmooth stabilisation feature that does a better job. Despite 4K, the GoPro Hero 7 Silver is closer to the White than the Black. Just like the White, though, sound quality is good. The camera has dual mics for wind noise reduction, and there’s a solid weight to its sound. 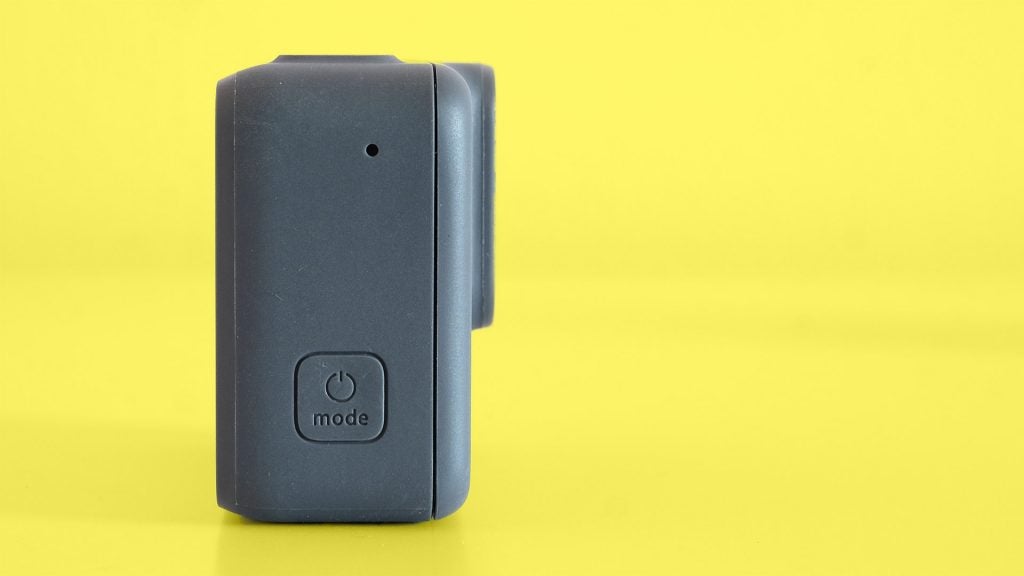 The Silver has a couple of extras, though. There’s GPS for location tagging of your photos and video, and WDR. The latter is a dynamic range-boosting feature for stills, much like the HDR mode on a smartphone.

Stills quality is fine. – although when you consider that phone cameras are now so adept, and wide lenses are reasonably common, buying a GoPro for stills alone seems a bad idea.

There are two other modes: time-lapse and slo-mo. Time-lapse makes dynamic-looking sped-up videos, which is a cheap way to add drama to your projects. Slo-mo isn’t impressive, however. At just 60fps, this speed isn’t considered slo-mo in most quarters; it’s more likely to be used to upload smoother 60fps video to YouTube. This also works at Full HD-only, while 4K is capped at 30fps. 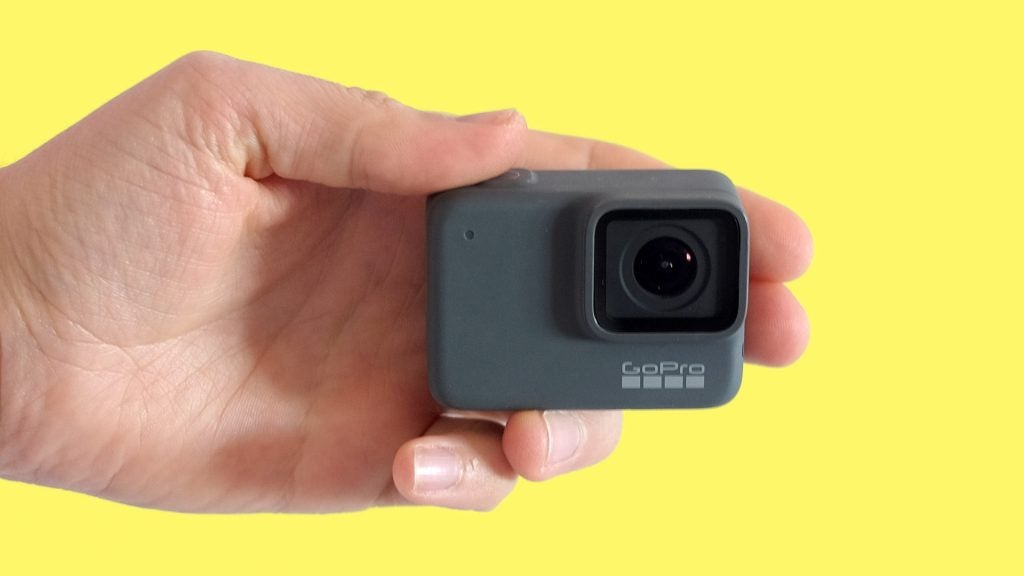 Why buy the GoPro Hero 7 Silver?

The GoPro Hero 7 Silver is a solid action camera that includes the all-important 4K capture missing from the Hero 7 White.

Its video quality and stabilisation are good, but don’t mistake this for a Hero 7 Black minus a few extras. It’s a Hero 7 White with 4K, GPS and an enhanced photo mode.

This isn’t a bad thing; the GoPro Hero 7 Silver is very easy to use. But for moderately serious use or film-making that will be seen on larger screens, the higher-end Hero 7 Black or DJI Osmo Action are better action cameras.