You’re in a nightclub. Everyone around you is dancing, having a good time, but you’re stood at the side, drink in hand, awkwardly looking around and bobbing along without any inclination to move onto the dancefloor whatsoever. Why? Are you shy? Are you overly self conscious? Have you not had enough shandies to loosen up a little? None of the above. You’re stood like a statue because, to be frank, the music sucks.

Whether you’re talking a night out or, in this case, a rhythm action game on your mobile, the music that accompanies the experience is incredibly important. If you can’t get into the beat (as the kids might say) you’re going to find it especially hard to engage with what’s happening around you, which is exactly Give It Up’s problem. Here we have a rhythm action game where keeping to the beat is the be all and end all, yet all you’ll want to do throughout is turn the game’s sound off. Yes, the music is that bad. 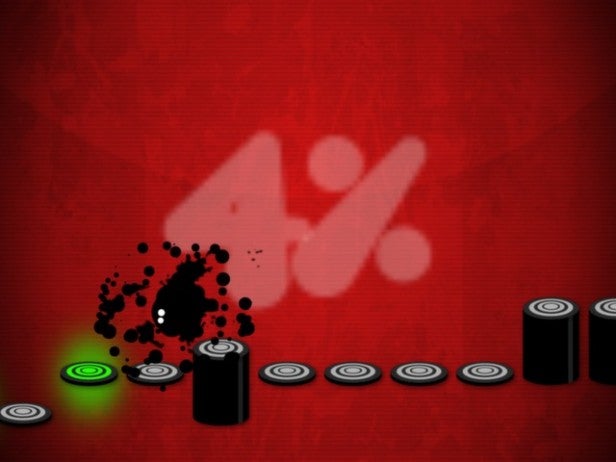 Actually, you’d have to be a little bit economical with the truth to even describe the noise that dominates play as ‘music’. It is, essentially, a loud rush of continuous thumps interspersed with onerous ‘beeps’ and ‘boops’ layered on for good measure. It is, quite frankly, a chore to listen to.

But, given the music is only one half of Give It Up, just what does the rest of play serve up? As a concept, Give It Up is as simple as it is intriguing. Matched to the fast paced beat is the movement of a strange black blob – almost like an ink blot – bouncing across a series of columns. Each bounce is handled automatically, meaning your only input is to tap in time with the beat when said blob needs to jump over an obstacle – most typically a column with a red spike mounted on the top of it. 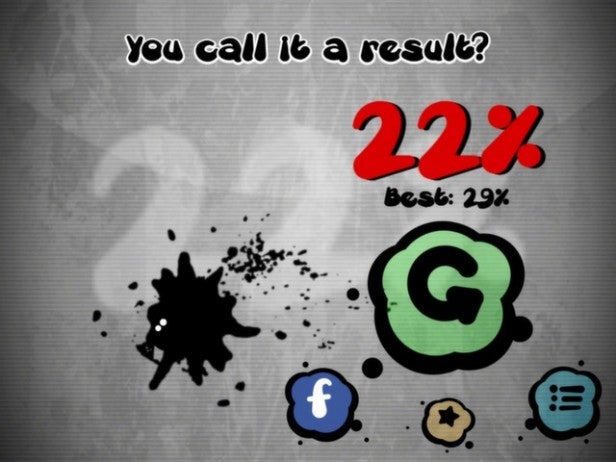 Jumping up to reach higher columns also requires your input, with success coming from reacting in time with the music if and when it’s required. Were Give It Up played at any slower a pace, this would be a rather easy task, but so fast do the levels stream by that actually keeping in time is not a problem – more deaths occur by simply jumping when you shouldn’t or vice versa.

This is what makes play so tricky. There’s no lives system in place here – one misstep, and it’s game over (on that level at least), with a counter in the background counting just how far through the stage you’ve made it. Somewhat amusingly, every time you come a cropper, the appropriately named Give It Up suggests you should try playing something else. 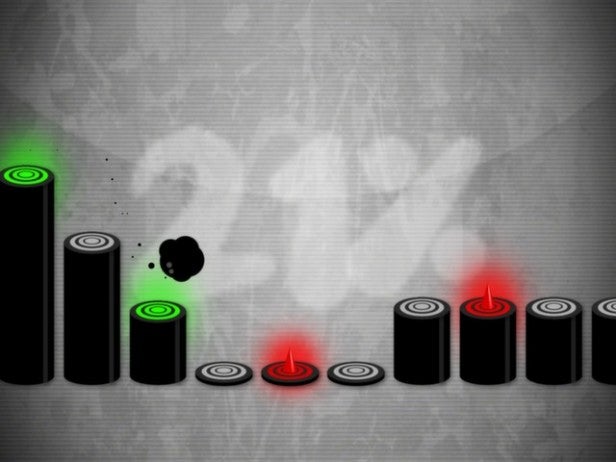 That’s because Give It Up is ridiculously hard at times. While the temptation is to tap along with every beat to get into the rhythm, doing so will see you jump straight to your death sooner or later. As such, you end up trying to track the music mentally, only tapping into said pattern when the game requires it. It’s a task that requires immense concentration, yet it’s hard to say whether successful runs are in any way fun.

Getting to the end of a stage in Give It Up certainly feels like an accomplishment. Take a gander at YouTube, and you’ll see videos of folk failing over and over again at what’s meant to be a tutorial level. Indeed, as soon as things begin to ramp up, getting through each stage becomes a case of trial and error – learning from failures to mentally map out just when you should tap and how often. But, if Give It Up is more a case mastering memory than reacting to the game itself, what exactly does success mean? 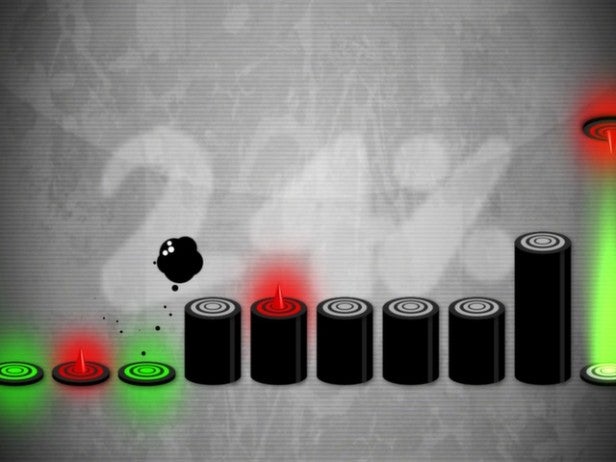 However you describe glory in Give It Up, what it lacks is any sense of entertainment. It is, instead, a well packaged ordeal without any real charm or purpose. You just reach each level’s goal and then move on, and then wonder why you’re still playing.

Or, if you’d rather an analogy, Give It Up is the equivalent of that annoying friend who keeps trying to pull you onto the dancefloor despite having requested the DJ play nothing but the greatest hits of Gloria Estefan all night. Just like Give It Up, there’s very little chance the rhythm is ever going to get you.

Verdict
Brutally hard from the outset, Give It Up’s take on rhythm action may be intentionally difficult, but it also lacks any real sense of fun to keep you going, instead offering up a series of charmless levels that can only be mastered with the aid of a damn good memory.