Available on Xbox One, PS4, PS3, Xbox 360, PC
There were retro shoot-em-ups before Geometry Wars, but it was Bizarre’s creation – originally a bonus extra in the Garage of Project Gotham Racing 2 – that brought them into the mainstream. Twelve years on from its initial outing and nine years from its stand-alone release on the Xbox 360, it’s now the subject of its own nostalgic re-imagining, courtesy of the ex-Bizarre bods at Lucid Games.

To its credit Lucid hasn’t settled for a straight full HD remake, or even one with nobs on. As the title suggests, Dimensions takes the flat grids of Geometry Wars and spins them into 3D spaces, where your fight against waves of fiendish polygons might now take place on a sphere or a cube or a sausage shape. Even when the action takes place on a flat landscape there’s a twist, with walls separating the space into a series of corridors or rotating barriers that threaten to sweep you and your foes together. 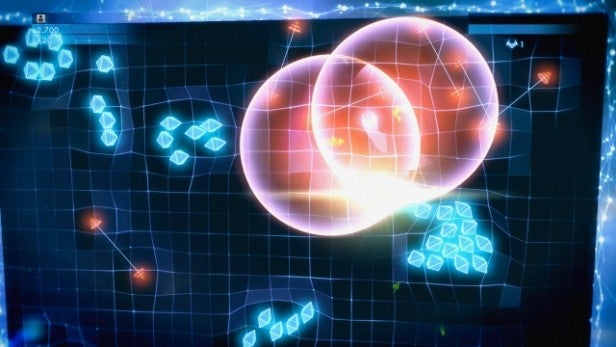 The actual gameplay is much the same; blast the shapes, grab the green lozenges they drop to rack up your multiplier, blast more shapes. The controls are classic twin-stick shooter, and you can pick it up and play it within seconds. Wave after wave of the swarming polygons appear, along with the occasional power-up which you’ll need to rush to, blasting away at the static emblem to unlock multi-directional fire or a thicker, faster stream of bullets. The 3D landscapes mean you can’t always see what you’re shooting at, as the line of fire disappears over the horizon, but this is the same Geometry Wars it was on the flat, pushing you to move faster, shoot smarter, and continually balance risk against reward.

Only it isn’t. Each stage in Dimensions’ core Adventure mode has its own completion rules, some asking you to score as much as possible within a time limit, others giving you a single life to work with, others still asking you to keep hitting end of wave checkpoints to add time to the countdown. It even crams in boss battles, stripping away at the protection of a master shape by racking your score multiplier upwards. This and the layout of the landscapes makes a game that always had a layer of strategy even more strategic. Each level isn’t simply a harder version of the last; you have to learn how to tackle it efficiently.

Read more: PS4 vs Xbox One 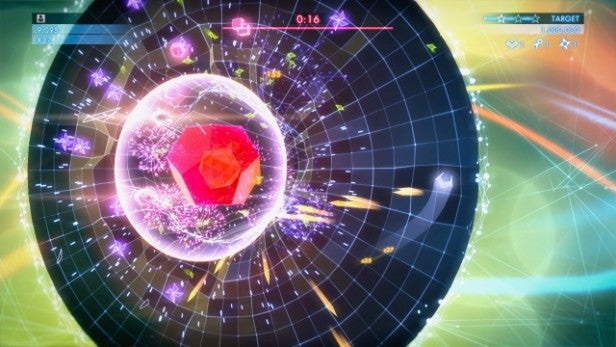 In a way this spoils the pure flow of Geometry Wars, but it also makes each level feel like a fresh experience – a new puzzle to be solved. Some levels become panicked attempts to tackle swarms in confined spaces, others frantic games of hide-and-seek. And as the game moves on it throws in drones, which follow your ship, blasting away with secondary fire and laying mines at the click of a trigger, ramming enemies or sniping distant targets. Again, you can say that these spoil the purity of the experience, but they also give you a chance to revisit old levels with new firepower at your back.

You’ll need to, because one of the few irritations of Dimensions is that, while most new levels unlock once you’ve hit the minimum one-star requirements of the last, the boss battles only unlock once you’ve collected a set number of stars. This means going back to get more stars on levels you might only have cracked by the skin of your teeth. I’m sure hardcore fans won’t have any trouble with this, but it seems a bit harsh on those of us who struggle more. 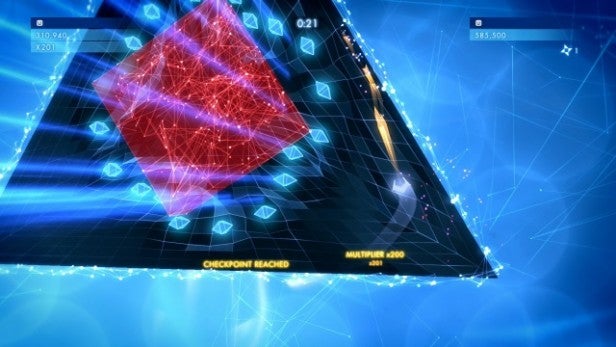 We love Geometry Wars. Bizarre had a gift for giving its simple, abstract enemies personality through their movement patterns. Like a weaponised pack of Quality Street you’ll find you grow to love some and hate others, dreading the onset of those pink gits who swarm you, or the blue rhombi who drift and hone in on your position. That hasn’t changed in Dimensions. If we’re being picky, we’d say that the music isn’t quite so good this time around, while some key sound effects get lost in the deafening racket, but with the sound turned high or headphones on, Dimensions is an audio-visual treat.

In fact, Geometry Wars has never looked better. Lucid has made the most of the full HD upgrade and added slick lighting and particle effects where they can have most impact, but it’s resisted the urge to slap on too many layers of light and colour. Dimensions’ visuals can be eye-searing and psychedelic, but you can always see what’s going on, even if there’s a bit too much going on sometimes for your conscious mind to cope. 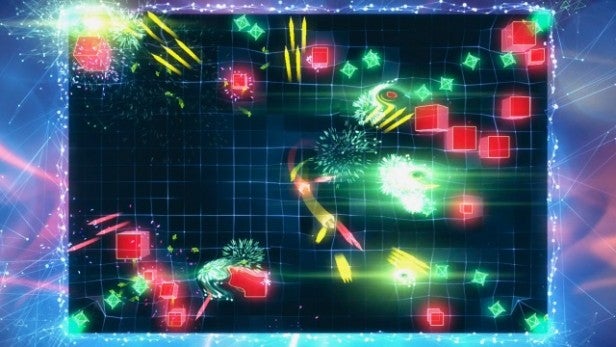 The rest of your mind is a different story, and the best thing about Dimensions is the way that it evokes a sense of flow. Often that elusive score only clicks into place when you forget to think about playing, and just play. It’s also incredibly one-more-go-ish, to the extent that you really don’t want to touch it late at night or before you have to go out. Some will always prefer the straight Geometry Wars experience, but Dimensions still has it, including the classic Evolved and Pacifism modes. Meanwhile local and online co-op modes are there to bring in additional players, though to our mind Geometry Wars always works best as a solo experience.

Verdict
It can be migraine-inducing and seriously challenging, but Dimensions brings Geometry Wars back into play as one of the best twin-stick retro shooters around. Purists might find the 3D twist and new additions a distraction, but they add variation and layers of strategy, and the old modes are still there if you prefer them. With dazzling full HD visuals, this is a triumphant return for a fantastic shoot-em-up.