It maybe easy to mistake the Garmin Vivoactive for a full-blooded smartwatch, but this is primarily a fitness watch. And this becomes clear as soon as you get your fingers on the interface.

Past the watch face, the Vivoactive’s menu is dominated by activity types. Most are essentially just GPS tracking displays, each with different fields and different rates at which the watch checks in with the satellites that track your position. Walking needs less intense GPS tracking than running, for example. 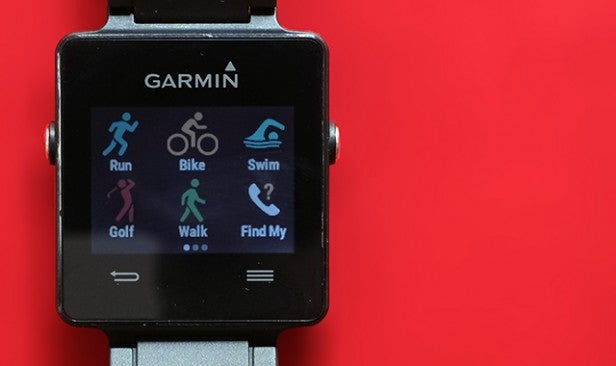 Just tap on one and you’re taken to a plain display screen that shows you vital information such as how fast you’re running/cycling, for example, and how far you’ve travelled. Thanks to the type of screen, there’s no major battery tax on keeping this updated near-constantly while you’re exercising. GPS is the only truly energy-sapping element.

If you’re in a new area and starting out on a run, it might take up to around two minutes for the Vivoactive to lock onto a solid GPS connection. However, not once did it lose connection thereafter during testing. Once it had become accustomed to our home test location, it tended to hook onto signal within about five-to-ten seconds. 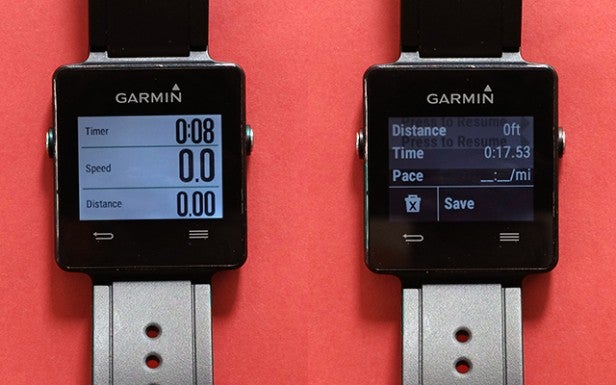 Here’s one of the pages during exercise activity, and the summary you get at the end of a workout

Tracking is also pretty accurate, if mostly relative to your movements rather than your exact position on the map. The watch itself doesn’t show you any mapping information, but when the details are synched to your phone, you can check out your exact movements on a Google Maps display.

In one of our tests, the Vivoactive showed us as being right in the Thames, rather than on the path alongside it. However, the Garmin Vivoactive will track carefully when moving from one side of the road to the other, and doesn’t make any egregious guesswork adjustments to the GPS data it receives. 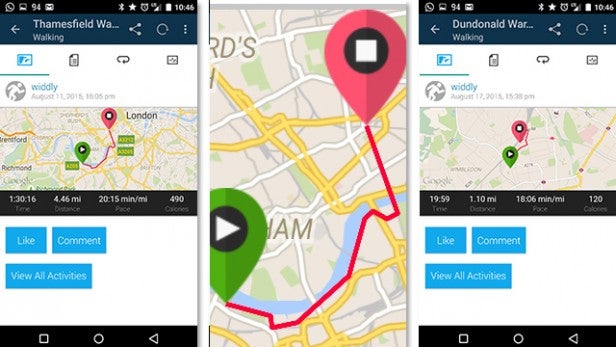 We trust it, for the most part. And without any effort on your part it will automatically split runs into one-mile segments, letting you keep a closer eye on your pace without giving it much active attention. Compared with top-end watches such as the Forerunner 920XT, it lacks some of the additional metrics info about your runs, swims and so on, but it should be about as accurate.

The Garmin Vivoactive also has extra-special golf skills. Through the Garmin Connect app, you can download courses. This basically tells the watch the exact location of the holes, letting you know how far away you are from the next one. There’s no extra cost for this, either – and it covers the whole world, with a comprehensive 38,000-course database. 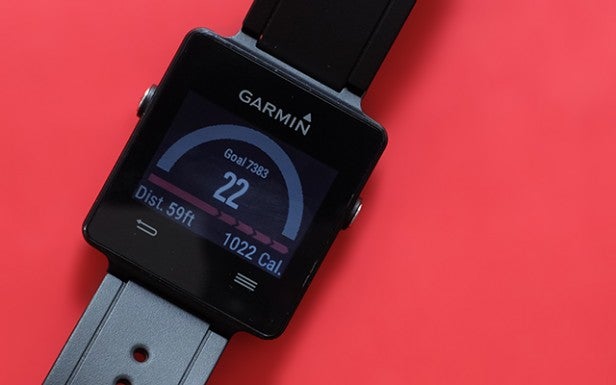 When you’re not using GPS, the Vivoactive uses an accelerometer sensor to track your steps each day. For gym activity, however, you may want to invest in additional sensors; otherwise, it’s only able to judge your speed. There’s no heart-rate sensor built into the Vivoactive, and the other “static” exercise profile mini-apps rely on sensors not in the watch itself.

It supports the same bolt-on accessories as Garmin’s higher-end sports watches. These include chest-strap HR sensors, bike cadence sensors and others. However, they don’t have to be Garmin items. Almost any that use the ANT+ standard should work. It’s good news if you use a static bike at home. This is also one of the cheapest devices to support Garmin’s temperature sensor, and also hooks into the Virb camera, letting you use the watch to control it.

When it comes to tracking exercise, the Garmin Vivoactive makes other watches of this smartwatch form look like pure fluff. And although there are plenty of smartwatches with HR trackers, few have hardware that can actually track your heart rate successfully during exercise. The LG Urbane heart-rate sensor is particularly dreadful, for example.