What is the Garmin fenix 2?

The Garmin fenix 2 is the successor to the fenix, which made its debut almost three years ago, long before the current smart watch furore. Although the fenix 2 has been on the market for a little while too, Garmin has no plans to discontinue it now that the fenix 3 is arriving. This is still a feature-packed GPS watch for those who like to keep their sporting activities varied. 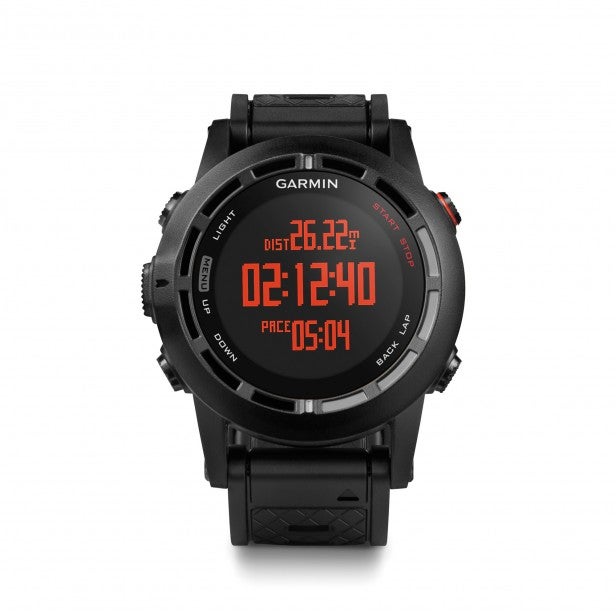 However, after putting the Garmin epix through its paces recently, the fenix 2 feels like a somewhat functional device. Unlike the significantly redesigned fenix 3, the fenix 2 uses a very similar physical design to the original model. It even has the same power cable. Inside, however, the fenix 2 is significantly upgraded, starting with the display, which is now inverted white on black and transflective, although with the same 70 x 70 resolution. This is significantly fewer pixels than the fenix 3 or epix, which offer 205 x 148 resolutions.

Still, this is a watch that is more closely focused on its core function of multi-sports tracking. Whereas the original fenix was aimed at terrestrial sports like running, hiking and cycling, the fenix 2 adds the functionality of the Garmin Swim. So it can now track your swimming activities as well. Add in the skiing options and mountaineering, and most activities are covered.

The fenix 2 is controlled by five buttons – three on the left, two on the right. But the operation of these buttons has been changed considerably compared to the fenix, and is generally a bit more logical. I did like the middle button on the left on the fenix being the one to enable the sports functions and select menu options. This is now performed by the top right button. But as this is the start-stop button for timing, too, with the bottom right the lap and menu-back, the overall operation feels a bit more intuitive.

The original fenix was rated to five atmospheres, and the fenix 2 hasn’t improved on this. The fenix 3 doubles underwater resilience to ten atmospheres, which equates to a 100m depth, but the fenix 2’s 50m rating should be adequate for all the intended activities. This isn’t a diving watch, after all. Where the fenix 2 does improve on the original model is installed memory, with 32MB instead of 20MB. Still, compared to the 8GB in the epix, it’s quite limited, although the fenix 3 sticks with 32MB as well. 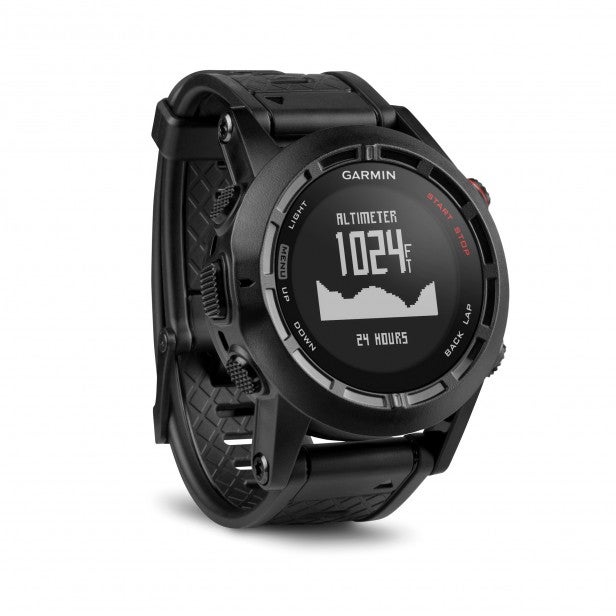 This may seem like a miserly amount of memory, but as the fenix range isn’t intended to host detailed maps (even if less detailed maps can be installed, and a basemap is included), the primary role for the memory is storing exercise data. Having 50% more room for this is welcome, as my experience with the original fenix was that it would fill up a bit quickly with a more detailed basemap installed.

I successfully paired the fenix 2 with the original Garmin heart-rate monitor for running via the ANT+ wireless connection, which is also available for Garmin’s range of sensor accessories. Most of the current on-sale fenix 2 bundles include the more sophisticated and recent HRM-Run, but this wasn’t supplied with my review sample. The HRM-Run adds “running dynamics” on top of the heart-rate. This includes vertical oscillation, ground contact time, and cadence. I had to make do with merely recording my heart beat, but that still allows VO2Max, Race Predictor and Recovery Advisor information.

When set to running mode, the watch linked to the heart-rate monitor and then the GPS took a minute or so to lock. The fenix 2 doesn’t support the GLONASS satellite network (unlike the epix) for faster locks and greater accuracy, but in practice I found its location tracking very accurate. There was much less variance than the original fenix, putting the fenix 2 on par with the GLONASS-enabled epix. Although the basic heart-rate monitor doesn’t contribute to this, the fenix 2 still captures cadence, thanks to its accelerometer. So you get a good idea of how your running is progressing. 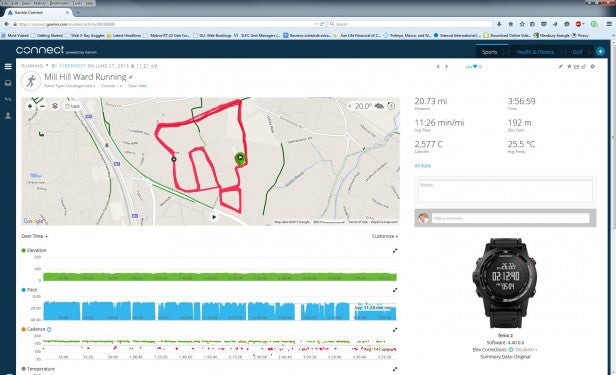 Selecting Swim gives you the choice of Pool or Open Water, and with the former you can choose the pool length. There are preset options for 25m, 50m, 25yds, 33 1/3yds, or Custom, although there is a minimum of 20m or 20yds, which is annoying if your local gym has one of those pathetic 12.5m pools like mine (I swim elsewhere as a result). The watch’s accelerometer will then detect your push-offs and the stroke you are using. For Open Water the watch enables the GPS and timer but doesn’t use the push off or stroke detection. 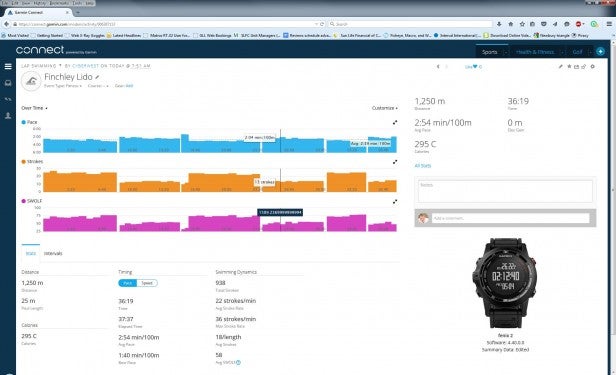 Garmin’s system for swimming is extremely accurate and only sometimes splits a length or combining two – usually due to a collision with another swimmer or with the lane division cords. The fenix 2 lived up to this past experience, although the beep when you hit the lap button for rests between intervals is a bit too quiet. I found myself checking to be sure I’d paused the timer in most cases. Sensibly, however, the screen switches to black-on-clear when you pause an interval for swimming from the usual clear-on-black, which is virtually impossible to read with goggles on. So there is a good visual cue that you’ve hit the button properly.

Although you can of course peruse your activities on the watch itself, there’s  much more analysis to be had via the Connect smartphone app or website. Uploading can be performed via the USB connection, ANT+ adapter, or Bluetooth (for the smartphone app). I successfully synced via USB and Bluetooth. The website provides quite a bit more detail than the app, and lets you set yourself goals. 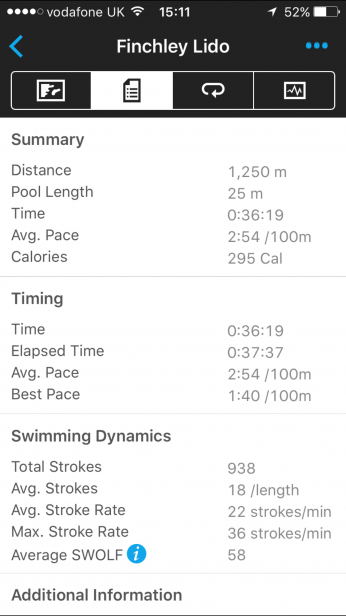 In both cases you can see your activities on the map (apart from indoor workouts and pool swimming). For running, the smartphone app provides summary data including calories burned, average and best pace, elevation, heart rate, running dynamics and temperature, plus a basic analysis of splits. There are graphs available too. The website doesn’t provide much more than this other than the ability to analyse specific points in time during the exercise. You get a lot more information about intervals when swimming on the desktop Web version of Connect, however, including analysis of individual lengths.

Should I buy the Garmin fenix 2?

The fenix 2 is still a capable multi-sports GPS watch. You can pick it up with the performer bundle (including the HRM-Run heart-rate monitor) for under £215, whilst the fenix 3 will set you back around £100 more for the same accessory combination. The fenix 3 definitely wins on appearance, with a greatly improved screen, better map options, WiFi and a barometric altimeter. But the fenix 2 is a very good deal at its current price.

The Garmin fenix 2 looks quite functional compared to the most recent glitzy smartwatches, but it still offers a comprehensive ability to track your activities across multiple sports.