What is the Garmin Epix?

The Garmin Epix is the company’s first watch to combine the features of its sports watches – and we mean all of them – with its wrist-based GPS mapping devices.

It’s a chunky beast, and won’t be any competition for the Apple Watch in the style department. However, when you take a look at its capabilities, you may not only forgive the militaristic styling, but it might actually become a draw.

The Epix weighs 85g and sports a 1.4in full colour display, which is virtually identical to the screen included in the Garmin VIRB action camera. This offers a 205 x 148-pixel resolution, which is more than ample for a watch. A backlight is available for this screen at the touch of a button, but otherwise it relies on ambient illumination. This means it actually becomes more visible in bright sun, although we found you need to get the angle right for best viewing.

Although the Epix is quite bulky by smartwatch standards, measuring 17.8mm thick, it doesn’t feel particularly unpleasant on the wrist, and you could comfortably wear it all day. The rugged looks grew on us during testing, too, particularly since it backs up its toughness with actual capabilities. It includes a five-atmosphere waterproof rating, which means it’s water resistant to 50m and will happily survive a swim. 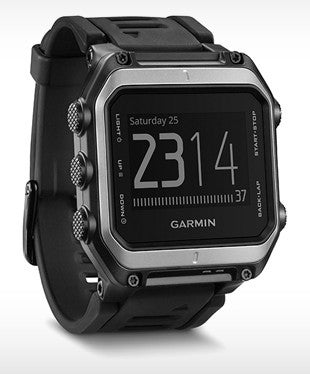 Although the screen is touch sensitive, most of the functions are accessed by the five buttons that sit on the watch’s edges: three on the left; two on the right. The top-left button activates the backlight, or power off/lock options when pressed for a couple of seconds. The two buttons below this scroll the current screens or menu up and down, although a longer press on the middle left button calls up a secondary menu of settings, configurations and activity history details.

The top-right button selects the current option or starts the current activity type, while the bottom-right button takes you back a menu level, marks a lap during an activity, or pauses tracking when swimming indoors. When you describe functions such as this, it all sounds very logical, but in practice the system takes a little getting used to. Note that you can scroll menus using the touchscreen as well.

There are so many features available on the Epix that we couldn’t possibly have fully assessed every single sport type it supports. But we did manage to put its hiking, running and swimming potential to good test.

For hiking, we went on a number of walks in Tenerife in the Canaries, including an eight-mile descent from a village called Masca down a gorge to the beach. This was a 2,000ft vertical distance over rocky terrain, and took around three hours. 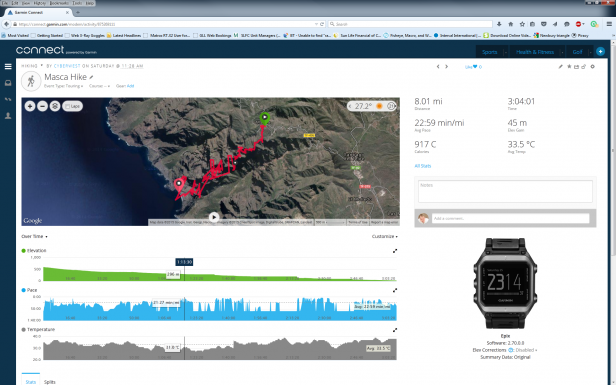 This hike revealed a regular problem with any GPS device. As we descended into the gorge, line of sight to the sky was increasingly obscured and the location reading became less accurate. This was despite the fact that the Epix supports the Russian GLONASS satellite location system as well as American GPS, so it has more satellites to choose from.

The watch was completely accurate for all the other hikes we did, illustrating that there was nothing particularly wrong with the Epix itself. But it’s something to consider if you plan to take part in activity where line of sight will be regularly obscured.

We were impressed by the 1:100,000-scale TOPO maps preinstalled on the Epix, which show altitude for mountains and comprehensive street-level details – even in the Canaries. It isn’t possible to use the Epix as a sat-nav, but you can save locations and find your own way, which is useful for marking where you have parked your car in unfamiliar towns. 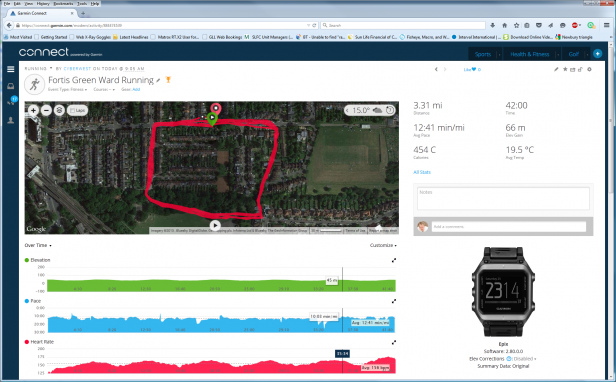 While still recovering from the gorge descent, we tried a 5.5K run, and paired the Epix with a Garmin heart-rate monitor via ANT+ (although not the more recent HRM-Run version). This helps make the calorie calculation more accurate for running.

The pairing process was speedy and we received a regularly updated reading, with accurate GPS positioning throughout. During running, the Epix also uses its accelerometer to calculate cadence, so you can see how you compare to other runners. A metronome feature is available too, so you can improve your cadence. 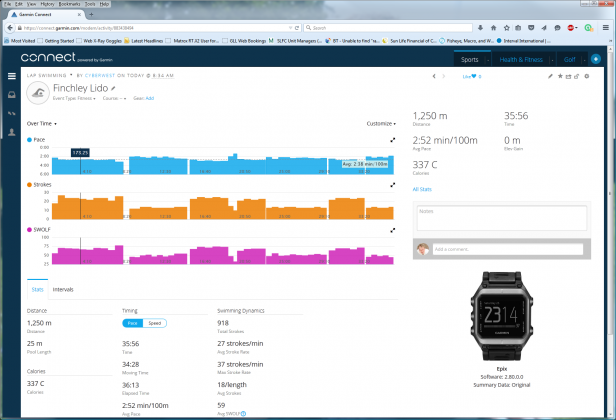 There are two sorts of swimming activity available – outdoor and pool. The former invokes the GPS to track distance, while the latter senses your push-off to record how many lengths you’ve completed, in a similar fashion to the Garmin Swim.

We tried both. The outdoor swimming works best when you’re travelling in one direction, rather than zig-zagging round a weirdly shaped holiday resort pool, but doesn’t record the stroke you’re using.

The indoor capabilities essentially match the Swim, although we prefer the simple, no-nonsense display on the Swim, which is easier to see through foggy goggles. Nevertheless, the Epix will detect your stroke type like the Swim, and we found it did a similarly good job of tracking a mixed 50-length session in a 25m pool. It was equally capable of differentiating breast stroke from freestyle. 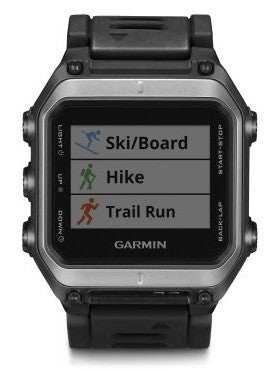 Aside from the activities we focused on, the Epix can be used with cross-country skiing as well as regular skiing and snowboarding, climbing, indoor running, indoor and outdoor biking. It works for multi-sport activities too: triathlon is pre-included but you can define your own combinations too.

Like a health band, it uses its accelerometer to track your day-to-day walking about, and will tell you to “Move!” if you’ve been sedentary for too long.

Aside from the heart-rate monitor, the Epix ANT+ connectivity supports bike speed and cadence sensors, a foot pod, power sensor, and the tempe wireless temperature sensor, although we didn’t have any of these to hand for testing.

We’re surprised that there’s no bundle option with the latest HRM-Run heart-rate sensor, but at least the Epix already provides cadence information from its accelerometer.

A decent sports watch also needs a good way to analyse and keep track of your performances over time. The main focus of this is the Garmin Connect website. The Epix’s USB cable link will be your main way of syncing activities from the watch, via the Garmin Express applet. They’ll then appear in Connect’s Activities log, and you can set yourself goals or share personal bests with your friends. 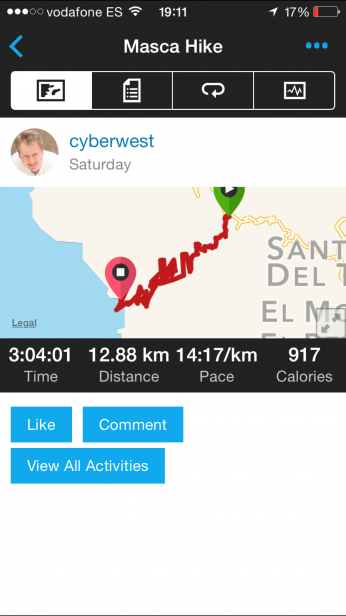 The Epix Bluetooth connection can be used to pair with a smartphone, after which the Connect Mobile app for Android or iOS can be employed to sync and track your activities. This has broadly similar features to the desktop version, and shares the same online database, although it won’t show any goals you have set yourself on the desktop site.

You can also sync Mobile Connect with the Health app on iOS, so steps that the phone detects will come across, and running and hiking with the watch will end up in Health.

It’s worth noting that the Epix isn’t compatible with the smartphone version of Garmin’s BaseCamp software, although it will communicate with the desktop version. So you can use the latter to upload tracks and Geocaches to the Epix, or turn your Epix tracks into Adventures for use elsewhere. 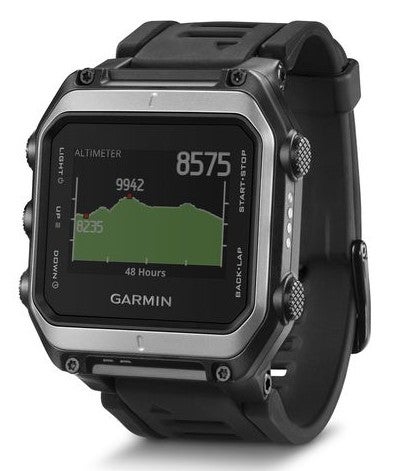 Despite its already huge array of built-in functions, the Epix itself can be extended further still with downloadable apps that Garmin calls Connect IQ, which the Fenix 3 also supports. These start with customised watch faces but also include new on-screen information arrangements and extra functions. They even offer support for new sports types and combinations.

Garmin supplies a number of extras itself, including the ability to control an audio player or a Garmin VIRB action camera over Bluetooth. The latter could be particularly useful for extreme sports activities, eliminating the need to use a smartphone or fiddle with your helmet to toggle recording.

Should I buy the Garmin Epix?

The Garmin Epix is a tempting package. Although it doesn’t have the design desirability of the Apple Watch, or some of the other smartwatches to have arrived in the past year, it has very clear uses and performs them well.

It’s expensive, but if you’re a highly active multi-sports person, it could be the only activity watch you need. There’s plenty to commend it, although those who don’t need the mapping capabilities should also consider the Fenix 3, which offers similar features.

The Garmin Epix delivers possibly all the multi-sports and activity watch functionality you could ever need.