What is the Gaggia Anima Deluxe?

The Gaggia Anima Deluxe is a bean-to-cup machine, but one with a different style from some other high-end models. Instead of letting you make cappuccinos and lattes with the press of a single button, it lets you output the building blocks of drinks with a press.

It’s a sort-of half-way solution for those who don’t want any of the mess of a manual machine but do want some sense of manual control. The Gaggia Anima Deluxe also features a pretty nifty milk froth attachment that lets you make milky drinks without any risk of ruining them by scalding the milk.

At £700 you probably want to consider whether a manual espresso machine might be a better fit. But while its audience is quite precise, the Gaggia Anima Deluxe aces what it is out to achieve. 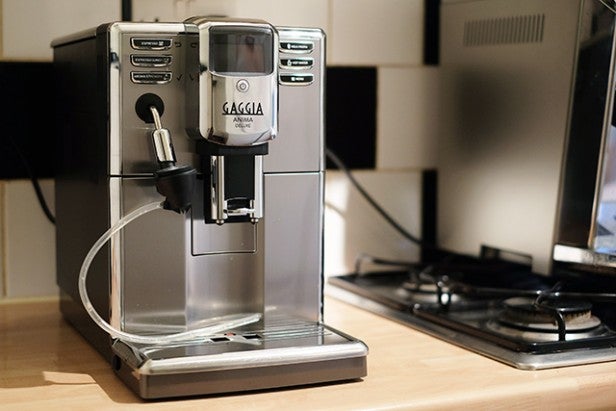 The Gaggia Anima Deluxe is a classic bean-to-cup machine in a lot of respects. You put bean in the grinder at the top, and coffee comes out of the spout on the front. So far, so ordinary.

Its looks are typical of Gaggia too. There’s lots of silvery metal on the front, while the sides are actually plastic. It has a slightly imposing quality by virtue of its lines and severe symmetry, but after seeing plenty of pictures of the thing, I was pleasantly surprised how easily it fit into my modest-sized kitchen.

The Gaggia Anima Deluxe isn’t hugely deep, and isn’t mega-tall either. Not for a £700 bean-to-cup machine at any rate. 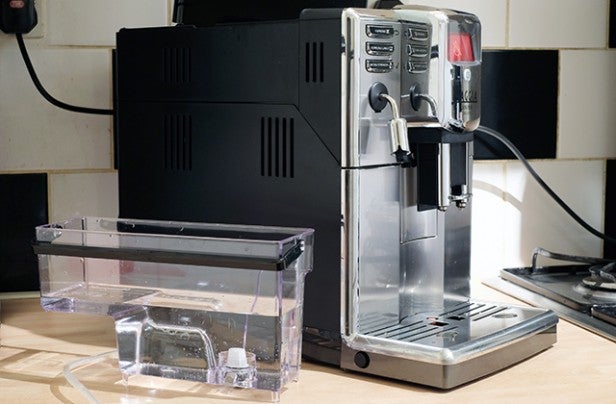 An undemanding style comes to characterise the Gaggia Anima Deluxe. Particular to this model in this range, it uses a milk brother attachment that plugs into the steam arm just to the left of the coffee spout.

Spend a bit more and you can add a full-on milk module (with the Anima Prestige), but as this has to be kept in the fridge, taking up space, this Deluxe model is the sweet spot for most. Less fuss, but none of the know-how required when using the bog-standard Anima. That version has a regular steam spout, meaning you’ll need to learn how to froth milk up properly.

All three methods are catered for, in other words. 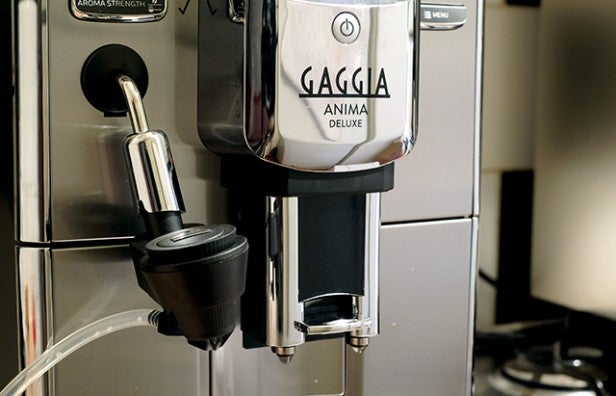 All versions of the Gaggia Anima have a pretty smart and sensible coffee/water reservoir system. Flaps on each side of the top open up to reveal the coffee bean and water spots. Looking at the machine front-on it’s beans on the right, water on the left.

The 1.7L litre water jug can be yanked out of the top for refilling, or alternatively you can just lift the top up and pour in a few pint glasses’ worth. As any regular readers of my coffee machine reviews may know, I find awkward rear-loaded reservoirs fiddly. This one is a delight.

Its refuse system is easy too. Little buttons on the side of the Anima release the drip tray, which
also holds the grounds bin. Like most bean-to-cup machines, the little
thing outputs handy coffee pucks rather than messy grounds. 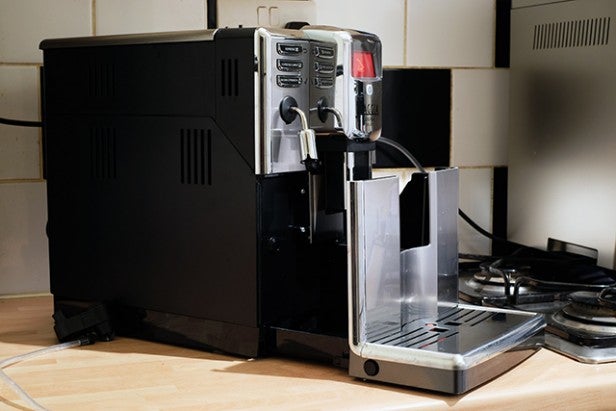 The Gaggia Anima Deluxe also gives itself a rinse through when it’s turned on and off, and switches itself off automatically after sitting idle for a while. So far, it’s the perfect low-maintenance house guest.

However, you do need to bear in mind how it works before ordering one. This is not a one button cappuccino coffee machine. That’s the bean to cup ‘holy grail’ for some, but it’s not what the Anima Deluxe is about. 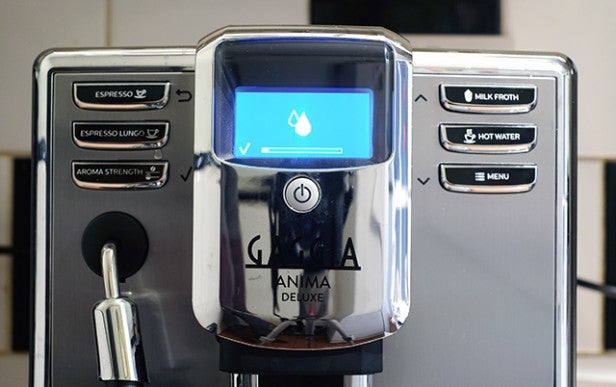 It instead features six button that make the Anima produce the elements that make (most of) those drinks. That means espresso, milk froth and hot water. While a professional barista wouldn’t be totally satisfied with that array, it’ll let you have a good stab at pretty much any pure coffee drink you’d buy at Costa.

The other three buttons on the front let you change the strength of the coffee, order a ‘lungo’ or long espresso, and access the menu. You won’t need to delve into the menu very often, though.

The benefit of the Gaggia Anima Deluxe style is that there’s zero nonsense, no fiddly presets. You do need to be a bit more of an active participant if you’re making long or milky drinks, though. It’s not a “hit the button and walk off” job, and unless you use similar-size glasses/cups each time, it can be a little tricky to get 100% consistent results. 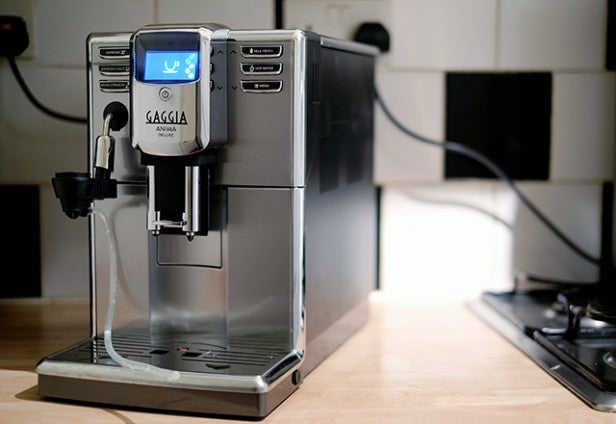 Still, it gives the Gaggia Anima Deluxe the air of a manual espresso machine, without the bit about having to clean out the coffee arm each time you make a drink. It’s a little unusual, but it does make sense.

I find the Anima Deluxe very easy to live with, and its milk system works very well. You put the attachment on the steam arm, then dip the tube into any container of milk: could be a jug, could be a mug (not included). As someone who drinks espresso/Americano frequently and milky drinks only occasionally, this is the perfect balance, meaning you don’t need to keep a separate milk carafe in the fridge.

Love ultra-milky coffee? Consider whether you want a machine that’ll make a latte with one button press: you can get this at the price, or from the Anima Prestige, which has presets for Latte Macchiato and Cappuccino. If you want more of a manual feel, the bog-standard Anima has a standard steam spout instead of this hybrid auto-frother one.

The Gaggia Anima Deluxe doesn’t exactly need skill to make great coffee drinks, but does need a little timing, to get your measures right. Of course, most people are probably happy to tweak the recipe to fill their cup, and that won’t matter if you use dedicated coffee vessels anyway. 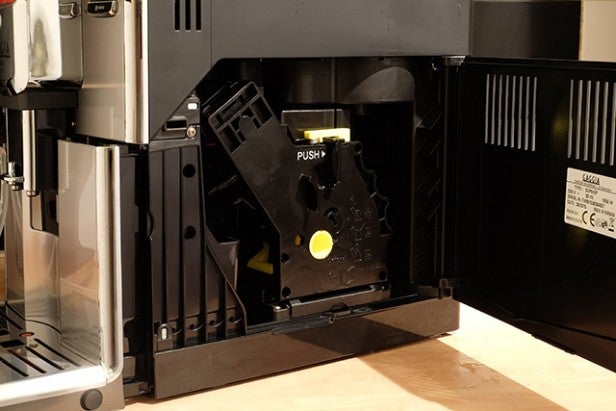 This machine is consistent, largely comparable with other mid-high end bean-to-cup machines. it’ll produce rich coffee, with deep flavour and the right bitter hit. Other than altering the aroma strength on the front panel, you can also fiddle with the grinder settings to suit different blends by removing the plastic side panel. And if you fancy using pre-ground coffee instead, it can handle that too, although one brew at a time.

Should you buy the Gaggia Anima Deluxe?

The Gaggia Anima Deluxe seems like a sort-of hybrid machine. It’s a bean-to-cup station with auto-preparation of milk, but doesn’t get you the one-button milky drinks that a lot of bean-to-cup buyers are after at the price. If you’re after that, consider the Prestige version.

It’s the sort of setup that makes me ask: are you sure you don’t just want a manual espresso machine? However, let’s not forget that the Anima Deluxe also grinds beans for you, and causes much less mess than such a machine.

If you want something that’ll just let you press a button, come back when the toast pings up and see a cappuccino freshly prepared, like the Krups Espresseria, the Anima can’t do that. It’s low-fuss, high-reliability approach is very easy to get on with, though.

A high-quality bean-to-cup machine with plenty of substance and a straightforward style.