The Gaggia Classic is a slightly tweaked version of an espresso machine that’s been around for decades. It makes the other coffee machines we review look like young upstarts.

So why has the Classic blueprint lasted for so long? Well, it’s very simple and has a dead-handy reservoir system. Oh, and it produces some of the finest espresso you can get at this price.

The latter part in particular makes the Gaggia Clasic seem worth £240. However, it does lack some of the finesse and flexibility of other machines: this is one for the purists. 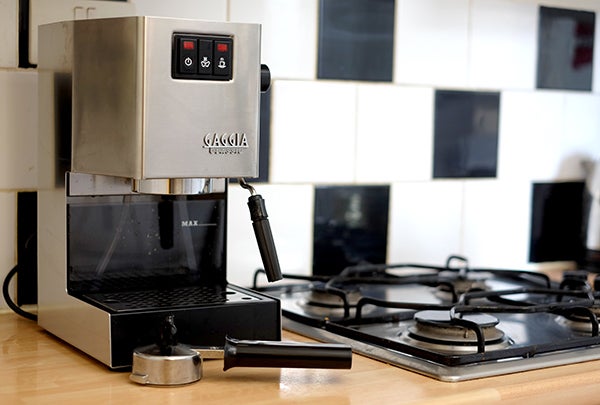 The Gaggia Classic is a machine you may have met before. It has been around for years, and has only lasted so long because it has proved very popular: seen in kitchens across the land.

It’s a mostly-metal design, with a stainless steel outer part that makes it feel a lot higher-end than something like the Krups XP5620, a handy and serviceable machine but one that still uses a lot of plastic.

At this point, though, the Gaggia Classic 2015 comes across more as slightly industrial than purely stylish. There are obvious seams along its top – not visible from the front in photos you may see, but pretty obvious in person – and plenty of the metal edges are very severe. 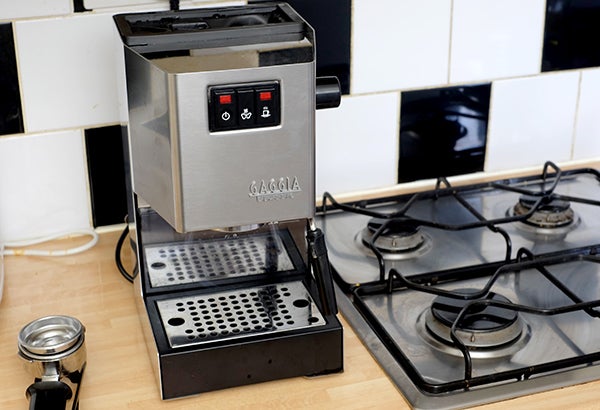 Next to the Gaggia Carezza, reviewed last year, the isn’t quite as much of a looker. But there’s something quite pleasing about knowing how enduring the design is.

One of the most important things to consider here, though, is that the Gaggia Classic is an espresso machine in a very pure sense. The height of the coffee arm is designed to accomodate little espresso cups only. There’s just not enough clearance for those who like to prep lattes and so on in a larger mug.

However, there is a fix for this, if not a particularly glamorous one. 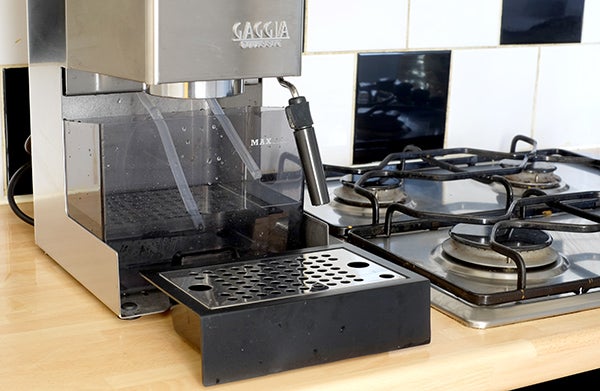 The Gaggia Classic’s drip tray is not held firmly in place from the front, and can simply be pulled out, letting you rest a mug on the bare metal frame underneath. It works just fine, but in truth feels like a bit of a hack.

This drip tray area is one part of the machine that could have benefited from a few tweaks in this 2015 edition. It feels a bit too much like what it is: a light plastic tray that doesn’t have a properly moulded seat to sit in.

It does take a lot of liquid before needing emptying and, again, is dead easy to remove, so it’s not all bad.

The Gaggia Classic is very much an archetypal espresso machine, with few extras. Not only is it not geared to produce long drinks “directly”, the steam spout doesn’t output water, just steam. It views the Americano as the bastard child of the espresso, something not to be trusted. 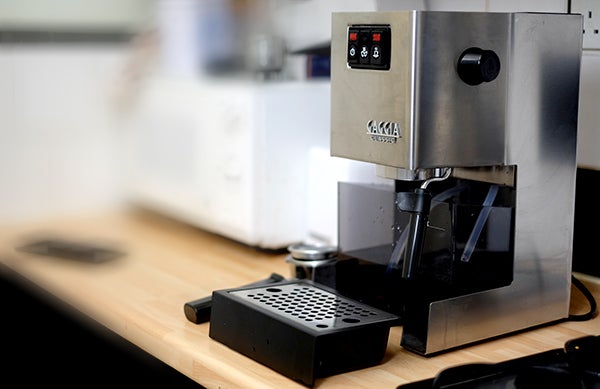 There’s also no obviously-signposted cup warmer area on the top. Instead, the it seems very much as though the area on top will hold cups as an accidental by-product of its design. There’s no ceremony to the Gaggia Classic, it’s deeply pragmatic.

A plastic flap on the top of the Gaggia Classic covers a chute that leads straight down into the water reservoir, letting you top it up without moving anything. Should you want to give it a proper clean and refresh, you can pull it out easily after removing the drip tray. Having to move a coffee machine just to take out the water reservoir is a bugbear the Classic avoids. 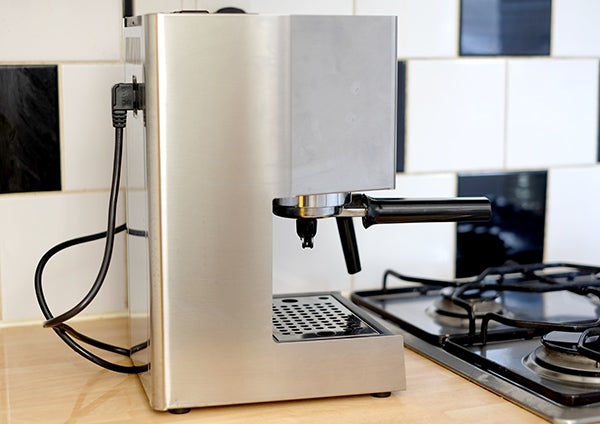 Of course, all of this was in place in the original model, and is likely part of its enduring charm. So what is different?

A big part of the reason for this tweaked model is new energy standards requiring an ultra-low consumption standby mode. However, there are some other hardware alterations too.

The new Classic has a stainless steel boiler rather than an aluminium one, to avoid corrosion issues a few years down the line. Its boiler is also a little less powerful, a measure designed to comply with EU regulations. It has also been made a bit easier to maintain, but that’s hopefully not something you’ll need to worry about in the first couple of years of use.

There’s a sense in parts the Gaggia Classic has been made to a tight budget, but also that every available penny has been put into the right things.

For example, the included temper is a cheap piece of plastic and the coffee holder’s spouts are plastic rather than metal. There’s a whiff of compromise, sure, but one is largely aesthetic and the other upgradeable: any tamper of the right diameter will work. 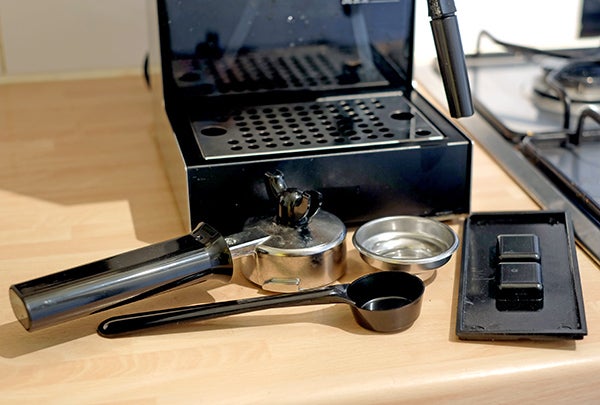 Forget these, though, and you can’t help but notice core elements of the Gaggia Classic are actually much closer to those of much more expensive machines. The coffee holder, for example, is much larger than your average £200 machine, being identical in size to that of the £550 KitchenAid Artisan Espresso Machine reviewed recently. And of course, this size isn’t just about the holder, but the design of its internals. This is every bit the serious machine.

It doesn’t result in being too demanding, though. As we’ve already addressed, it’s only really perfectly suited to small espresso cups, but operation is otherwise easy.

There are three buttons on the front. One switches the Gaggia Classic on and off, one toggles steam prep and the last starts and stops the stream off water through the coffee holder. 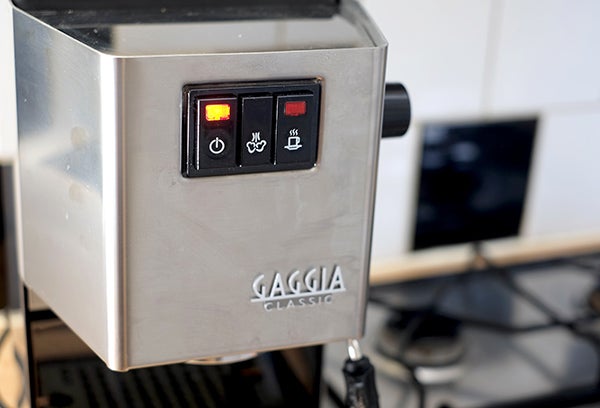 With red lights on two of these to show you when the water is at temperature, there are few complications here. It is not entirely idiot-proof, though. If the steam prep button is left depressed for a while before serving coffee, the holder will actually output steam and water, which is really not ideal. We did find it was quite easy to accidentally leave depressed, as there’s little visual indication whether it is or not. It’s a quirk.

The Gaggia Classic is also not the fastest machine in its class. It takes a couple of minutes to heat up: slower than, for example, the Krups KP5620. This seems to be largely down to Gaggia’s commitment to meeting EU regulations, as it has a lower-powered boiler than some machines in its class, including the old Classic. 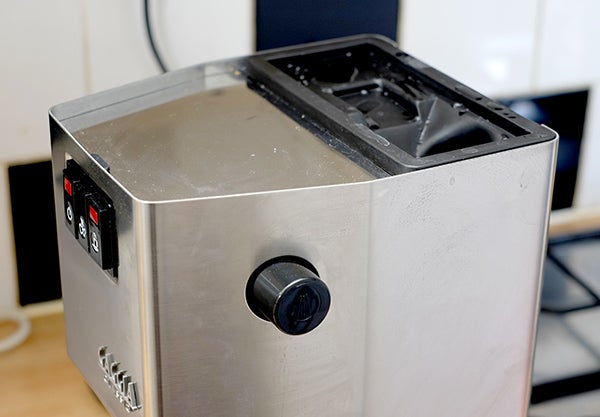 The Gaggia Classic has a few little issues and contentious bits. However, all of that is largely forgiven when you taste, and even look at, the coffee.

It provides rich, smooth and dark crema every time, with only slight tamping required to get the perfect flow of coffee. It’s impressive stuff, and across the test period the Gaggia Classic offered the most consistent results we’ve seen in this class.

The nutty, slightly bitter flavours it produced from our test grounds were just about perfect, making the Gaggia Classic a good pick for those revving up for a lifetime of coffee snobbery. 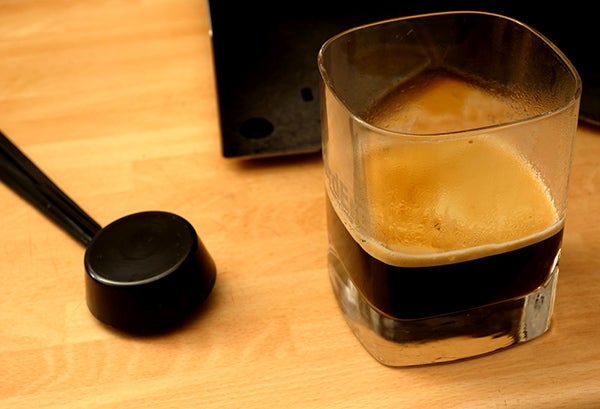 While the low-height coffee holder isn’t as perfectly suited to taller drinks as some other consumer-grade espresso makers, the steam arm is tremendously powerful when up to temperature. It’ll heat and froth up a large latte’s worth of milk in just a handful of seconds. You might want to consider switching to actually espresso shot glasses for the sake of this machine. 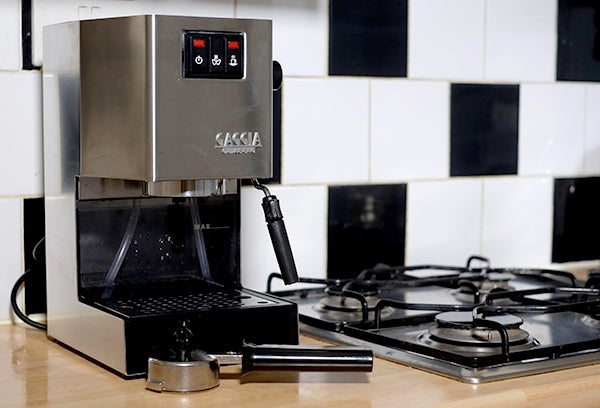 Should I buy the Gaggia Classic?

The Gaggia Classic is a fantastic machine for those who want to get the best espresso in a £200-odd machine. Certain elements don’t have quite the ultra-friendly look or usability of some others, but this is a machine that feels as though it has been streamlined to produce the very best coffee it can.

It’s a machine for enthusiasts on a budget – and yes, despite appearances £240 isn’t masses of money for a machine like this.

However, if you’re not going to get too obsessive about the quality of crema and how rich a brew you get every morning, the house-favourite Krups XP5620 offers slightly greater convenience. Its coffee holder is higher, its auto-tamp mechanism cleaner and its reservoir system even more handy. Does it produce coffee as good as the Gaggia Classic, though? Well, no.

It’s a touch inflexible in parts, but the Gaggia Classic makes terrific coffee.