What is the Krups EA8298 Espresseria?

The Krups EA8298 Espresseria is a bean-to-cup machine for people who want top-quality coffee with no fuss. The USP of this particular model in Krups’s pretty expansive bean-to-cup range is that it offers one-button cappuccinos with the help of a special milk accessory.

Love cappuccinos and no other milky drinks? You’ll love the Krups EA8298 Espresseria. While not all that flashy for a £500 machine, the quality of its coffee is excellent.

However, it’s deliberately limited and the milk system could be a little more sophisticated, and a lot more flexible. While perfectly functional, it does feel like an add-on to a slightly more impressive core unit. Sure enough, that’s more-or-less what the Krups EA8298 Espresseria’s cappuccino module is. 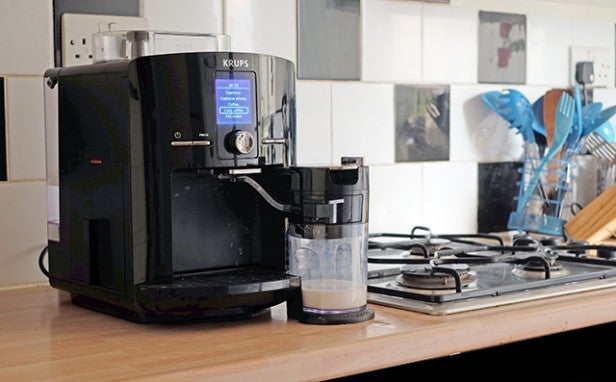 What do you expect from a £500 coffee machine? If you want something that feels high-end and expensive, you may not initially get on with the Krups EA8298 Espresseria.

Krups tends to make lower-end and higher-end versions of some of its machines, and this is certainly a lower-end style one. It looks good, but the construction is virtually all plastic.

Some of the most likeable machines we’ve reviewed in the last 18 months are Krups models, like the entirely no-nonsense £100-or-less Krups XP5210, but we were initially a little disappointed that this higher-end model doesn’t really feel all that much more solid despite costing five times the price.

We should also note, though, that this is effectively a new ‘cappuccino’ version of the EA825840, which at £400 is one of the cheaper bean-to-cup machines. 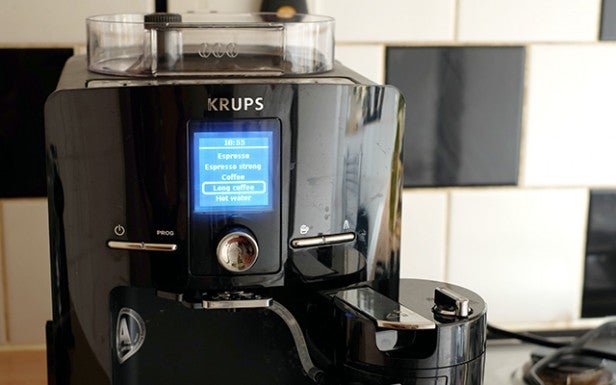 We’re sorry to tell you that £500 really isn’t all that high-end in the world of the bean-to-cup machine.

Still, particularly in the main coffee/espresso core of the Krups EA8298 Espresseria there’s plenty of the usual Krups practicality in evidence. The spot where you dump your coffee beans is right on top and has a transparent side, making it easy to see how much is in there. 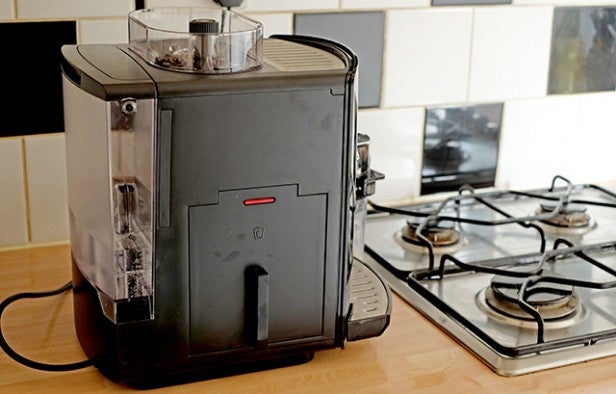 The 1.8l reservoir sits right at the back of the Krups EA8298 Espresseria, but you can simply lift off the lid and fill it in-situ rather than having to remove it. Side or front-loaded reservoirs are generally more convenient, though, so make sure this fits in with the design of your kitchen before buying.

No part of the Krups EA8298 Espresseria goes to waste, of course. The left side panel is where the used coffee pucks end up, and the heat output from the boiler is piped up through a grille at the top-front of the machine, acting as a cup warmer. 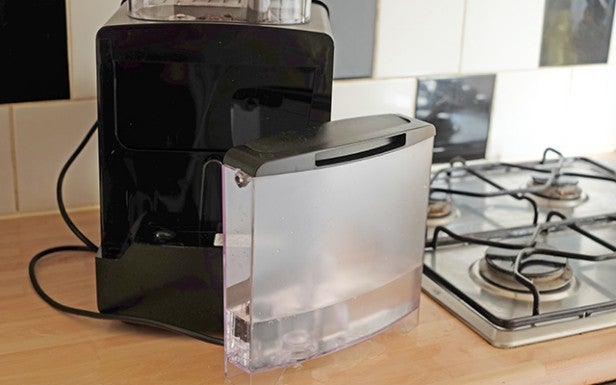 While we’ve been pretty plain in saying the Krups EA8298 Espresseria doesn’t feel like an ultra-premium coffee machine, the interface is a step above. Krups’s cheapest bean-to-cup machines use basic mechanical buttons and switches, but this one has a digital display.

It’s monochrome, with blue characters, and is what you use to select drinks, bar cappuccino. That gets its own button on the front panel, for that all-important ‘one-button cappuccino’ boast.

For other drinks, you can rely more-or-less wholly on the silvery rotary dial in the Krups EA8298 Espresseria’s centre. The menu system is wonderfully simple, a delight to use. 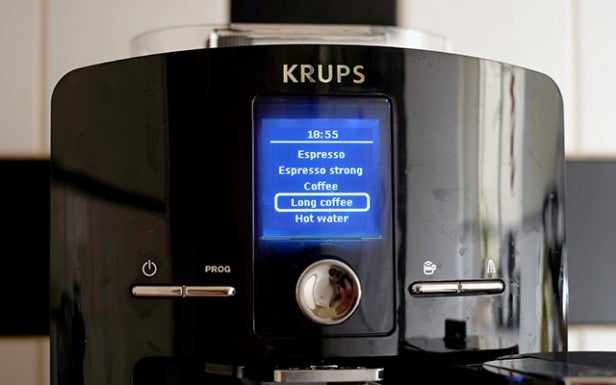 After a brief pre-heating phase when you turn the Krups EA8298 Espresseria on, you’re shown a simple list of drinks. They’re all non-milky ones because, as we said earlier, all that’s on offer here on that front is cappuccino.

There’s no annoying setup process for each kind of drink either. When you pick what you’re after, a long coffee, espresso and so on, you then use the rotary dial to pick how much volume (ml) you want. It’s a very versatile way to operate.

Not everything is done on the fly, though. In the Settings menu you can switch auto maintenance – which rinses the machine through automatically – on and off, select coffee temperature and input the hardness of the water in your area. 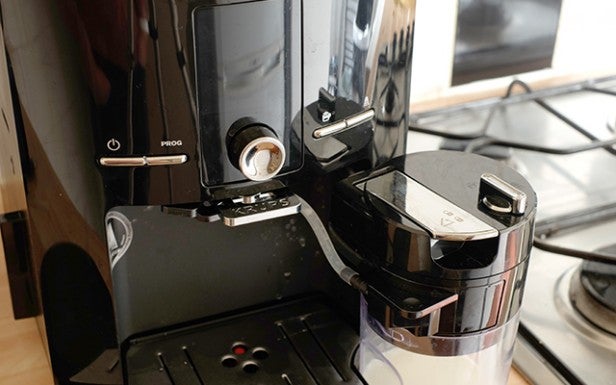 The Krups EA8298 Espresseria also makes controlling the grinder dead easy. There’s a little rotary dial in the bean reservoir that alters the coarseness of the grind.

To make a cappuccino, you have to attach the milk module, which slots into the steam nozzle that otherwise outputs hot water. It’s here that we have a few issues with how the Krups EA8298 Espresseria operates.

The integration of the milk module just isn’t as smooth as we’d like. After locking it into the steam arm, you then snake a tube around it and put it by the coffee output, where it’s held in place with a magnet. 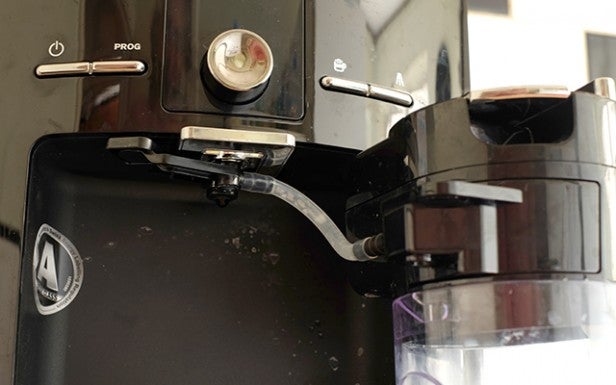 It’s a little fiddly, especially when you have to remove the thing all the time to put the milk container back in the fridge. And while the Krups EA8298 Espresseria is sold as a bean-to-cup cappuccino machine, we’re also a bit disappointed by how inflexible the milk side of the machine is.

There are no other milky drink presets, and you can’t even make the Krups EA8298 Espresseria just output heated or frothy milk on its own. You’re totally hemmed in.

Thanks to the way the cappuccino button takes over the spot of the milk steamer button in the ‘non-cappuccino’ version of the machine, you can’t even steam up your own milk. Fancy a hot chocolate with some nice velvety foam on it? The Krups EA8298 Espresseria can’t make one, even though it has all the hardware it needs for the job. All you can do is customise the cappuccino preset a bit, and that’s not quite good enough. 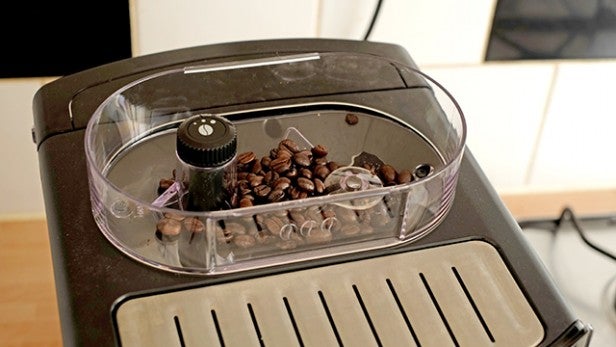 What’s frustrating is that this issue could be fixed if the software had been optimised for this particular machine a bit more, grafting the more basic ‘non cappuccino’ version of this machine’s preset buttons into the menu system instead of binning them. But that hasn’t happened so we’re left with what feels like an unnecessarily limited machine.

As far as we can tell, there’s no way to update the software either. Unlike so much we review, there’s no USB port here. The cheaper version of this machine without one-button cappuccino is actually more flexible.

Krups EA8298 Espresseria – How is the coffee?

On the positive side, there are no huge complaints about the quality of the coffee. The cappuccino is smooth and rich, with a smooth, velvety froth on top. As noted earlier, you can also cutomise the milk/coffee constiution.

Standard coffee drinks are consistently great too. Crema is dark and smooth, and the flavour is rich with just the hint of bitterness we’re after.

Here are some images of what some of the standard presets produce. 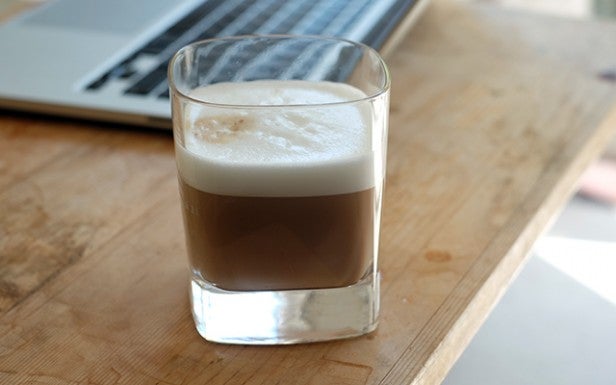 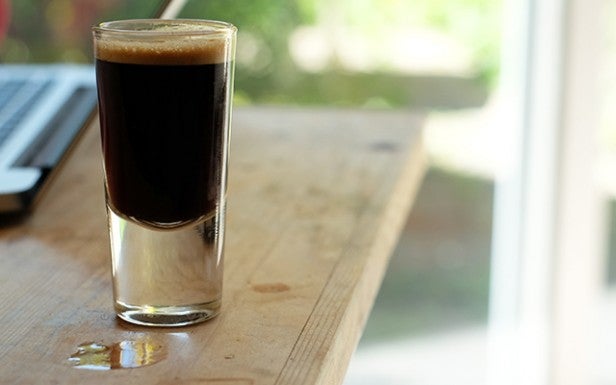 We do think there could be more scope for higher coffee temperatures, though. Within the settings menu you can pick between three temperature levels, but even at the top one, the coffee isn’t quite hot enough to avoid becoming tepid should you, for example, add some cold milk to a long coffee. Even the cappuccino preset needs to be drunk fairly quickly to avoid ending up with a not-quite-hot-enough cup. 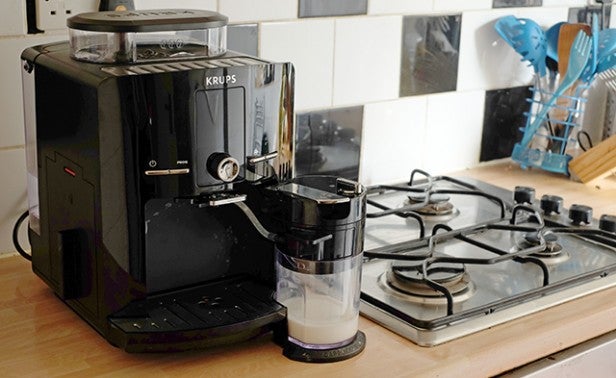 Should I buy the Krups EA8298 Espresseria?

The Krups EA8298 Espresseria has a great bean-to-cup core and a dead-easy cappuccino module on the side. It has an audience of cappuccino obsessives who don’t want to have to fiddle with a manual espresso maker in mind, and aims right for them.

However, we can’t help but feel that for £500, Krups should have focused a little more on opening up some of the machine’s obvious possibilities. There are a few too many things it could easily do, but can’t.

Our positive experiences with the machine make us have bright hopes for the lower-end models in this particular series, because for ‘normal’ coffee it’s a bit of a star. However, we can’t ignore that the milk system of Delonghi’s rival bean-to-cup machines is that bit more sophisticated.

It’s easy to use and produced good coffee, but it’s just a bit too limited in some respects.