What is the Fujifilm X70?

A smaller sibling to Fujifilm’s well-received X100 range, the discontinued X70 was a stylish compact camera that packed in an APS-C-sized sensor and all the manual controls you’d expect from Fuji’s X series.

The new Fujifilm XF10 is considered by some to be its successor, but isn’t a direct replacement for the X70 in either spirit or features.

While both cameras share the same fixed lens, the XF10 lacks the X70’s tilting screen and X-Trans sensor. Its simpler control system also suggests it’s aimed more at casual photographers rather than the enthusiasts who saw the X70 as an ideal ‘second camera’.

If you’re looking for a compact, fixed lens backup to your main camera, it’s still worth considering second-hand Fujifilm X70s. They’re potentially strong options for those who don’t have the budget for an X100, but come with some trade-offs for the cheaper price and smaller body. There’s no viewfinder, and the 28mm wide-angle lens won’t be to everyone’s taste.

Fuji has made a name for itself with its X series cameras, bringing the firm out of the doldrums of mediocre compact camera production to make it one of the most desired camera brands of the moment.

The X70 took the design of the X100T and tweaked it to make it more pocketable. As a result, it didn’t quite have the same level of retro appeal as the larger camera, but remained a sleek device – one that, crucially, was more likely to fit in your pocket. 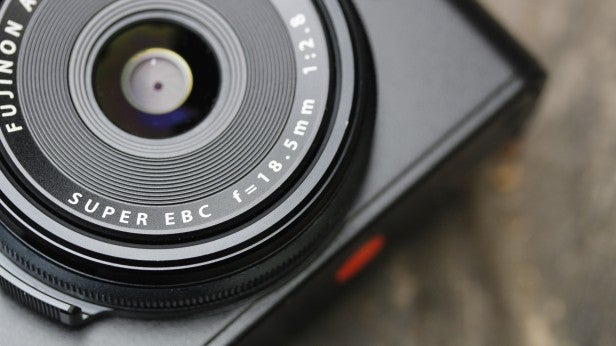 The camera sported a relatively simple design, but provided quick access to most of its popular settings. Around the camera’s lens was a dial for changing aperture – something traditionalist photographers loved. However, what they didn’t love so much is that, since the lens was fairly flat in order to keep the size compact, it was quite difficult to get a decent grip on the aperture ring – and harder still to grip the manual focus ring. With practice, you can at least become used to its positioning.

Although the X70 was arguably aimed primarily towards enthusiast and more advanced photographers, it still included an automatic mode that was activated via a switch on the top of the camera. With this mode, you could let the camera do everything for you and concentrate on composition. To help here, you could switch on the digital horizon level in the main menu to ensure your shots were straight, which was handy.

In order to set the autofocus point, you could use the touch-sensitive screen – a first for an X series compact. A simply tap of the area would select the point as necessary. You could also set the camera to take the shot with a press of the screen, or even switch the touch sensitivity off altogether. If you chose to do the latter, you could set the AF point by first pressing the down directional key, and then use the other directional keys to move to the point you wanted to use.

By pressing a button marked “Q” you’d be able to access a group of settings without having to go into the main menu. Here you’d discover settings such as ISO, white balance, film simulation, aspect ratio and more. It was a shame that you couldn’t navigate through this menu using the touchscreen; instead you’d need to use the physical keys, which although simple could take some time. 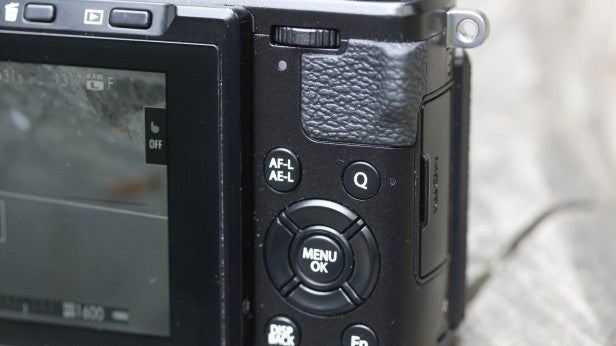 If you wanted to use the electronic shutter for even faster shutter speeds than represented on the dial, then you could use a small switch found on the back of the camera to move past the 1/4000 speed. It was useful to use very fast speeds when shooting wide apertures in bright light to avoid overexposure. Fast shutter speeds are also good for freezing fast-moving action, such as sports, but this camera wasn’t really designed for such tasks.

There were a couple of other notable buttons on the X70. A function button marked Fn, which could be customised to a particular setting of your choosing; by default it provided access to the X70’s Wi-Fi connectivity. Several other buttons on the X70 were also customisable to different functions.

Since this camera lacked a viewfinder (electronic or otherwise), you’d find yourself relying on the screen entirely to compose your images. Alternatively, you could purchase an optical viewfinder at additional expense to slot into the hotshoe.

The good news is that the screen was pretty decent, resisting reflections well and showing a detailed display of images in playback and the view in front of you. Although a fully articulating screen would have been more useful for portrait images, the fact that this screen tilted to face forward or downward helped to move it out of the way of very bright sunlight – and of course facilitated group shots and selfies.

The inclusion of touch-sensitivity speeded up setting the autofocus point, and was also useful for swiping through images in playback. The icing on the cake would have been the ability to use the touchscreen to move through menus – but there was no such provision on the X70. 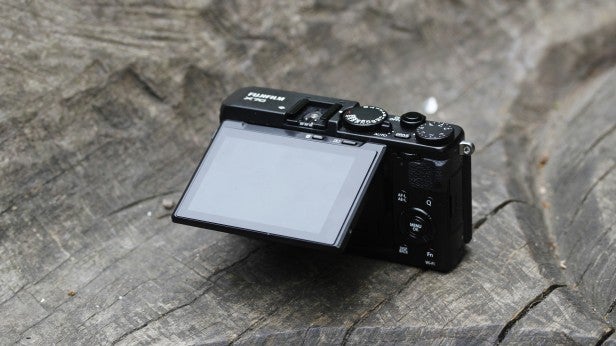 The fixed-length lens put off some folk. However, when you consider that mobile phones don’t have zoom lenses, and are obviously very popular, it became less of an issue.

The X100T has a 35mm equivalent lens, while the X70’s was 28mm. That made it a little more usable for landscape-style shots, as you could get more of the scene in frame. Some people will argue that 28mm isn’t good for portraits, but it was possible to achieve decent “environmental”-style portraits with the camera, being careful not to get too close to the subject so as to create a distorted effect.

Having a fixed-length lens was a trade off for the large sensor; remember that the sensor inside this tiny camera was identical to those you’ll find in much larger models, including DSLRs. As such, the 28mm lens here was a good performer, with no visible distortion in the corners of image. As previously mentioned, some people will prefer the slightly longer 35mm length of the X100T, but 28mm is satisfactory for landscapes and still usable as a walk-around length.