The Fujifilm X-S10 is a mid-tier mirrorless camera that offers impressive features. It also has a control setup that diverges from the manufacturer’s norms to appeal to users more familiar with other brands.

The X-S10 seems to be pitched as an all-rounder, appealing to those who make videos, take photos and those who fall somewhere in-between; perhaps they’re looking for a smaller, lighter camera than their existing DSLR.

It can record uncropped 4K footage at up to 30fps and 1080p HD footage at up to 240fps, while its in-body image stabilisation (IBIS) setup battles camera shake when shooting stills or movies.

Despite its mid-range billing, the camera boasts a strong set of technical specs and features. The X-S10 is based around the same 26.1-megapixel X-Trans 4 sensor and X-Processor 4 hardware found in the company’s (significantly pricier) X-T4 and X-Pro3 flagship models, and offers many of the same benefits.

Owners can use any lens from Fujifilm’s excellent X-mount range, which comprises everything from ultra-compact pancakes to long zooms and even a couple of Cine lenses for professional filmmakers. For the purposes of this review, I used just one lens: the highly capable XF18-55mm f/2.8-4 zoom, which can be purchased in a package with the X-S10 for a total cost of around £1299/$1399. Body only it’ll set you back £949/$999.

But is this one of the best cameras you can buy? 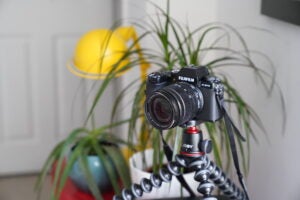 Weighing a mere 465g (without a lens), the X-S10 is a lot lighter and more compact than many models in its class; certainly, there are few IBIS-equipped cameras as readily portable as this. It will feel like a major benefit to users moving from a DSLR or heavier mirrorless camera – you could likely spend hours out and about with this around your neck and not feel uncomfortable.

Despite its low weight, the body feels solidly constructed – its frame is magnesium alloy. Note that this model isn’t weatherproofed, however; so whipping it out in a rainstorm isn’t recommended. This is one of the few areas where the Fujifilm X-S10 does fall significantly short of its X-T4 and X-Pro3 cousins, which are sealed against water and dust and feel more rugged overall. But, the corners have to be cut somewhere to get that price (and weight) down.

With a large grip for the user’s right hand to wrap around, plus a sizable bump to house the electronic viewfinder, hot shoe and pop-up flash, the Fujifilm X-S10’s shape is one seen a thousand times before in SLRs, DSLRs and mirrorless cameras.

There’s a reason for that, of course: it feels nicely secure in your hand, and while gripping you can easily access the shutter button, power switch and other controls on the top and rear. If you’re coming to the X-S10 from a DSLR, you’ll feel right at home.

The control setup is quite different from Fujifilm’s usual dial arrangement. Most X-series cameras have dedicated shutter speed and ISO adjustment dials on top, but the Fujifilm X-S10 has a PASM mode dial – the kind you’ll find on most rival models. This is to ensure new users, who may be more familiar with Canon, Nikon, Pentax or another brand, feel more comfortable, although some might see it as diminishing the X-S10’s “character” somewhat. There is one unusual, Fujifilm-flavoured touch here, though: a customisable third dial that, by default, is used to select the current Film Simulation mode (more on that below). 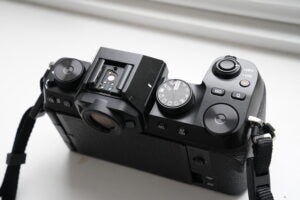 Overall, I found the controls a pleasure to use, both in terms of where they’re located and how they feel. If there’s one criticism, it’s the shape of the on/off button: its low profile makes it a little hard to find at times.

The battery here is one that will be familiar to Fujifilm users (the NP-W126S) and, according to the manufacturers, will deliver about 325 shots or around 40 minutes of 30fps 4K video capture per charge. That sounds about right after a few weeks of testing, but be aware that continuous face detection will drain it quicker. An external charger isn’t included in the box, so you’ll have to charge in-camera unless you buy one separately.

There’s a single SD card slot for storage, with UHS speed class 3 or above required for video recording.

The screen is a 3-inch, touch-sensitive flip-out display that can face almost any angle, including fully forward.

It’s ideal for self-shooters and vloggers, as they can clearly see what’s in frame and what’s not. It’s handy for shooting at unusual angles, too. I used it to get a shot of waves lapping at the beach from just a couple of inches above the sand – something I would have had to lie flat on the ground for otherwise.

I didn’t find myself using the touchscreen controls much, but they do add an extra option for adjusting settings and, in particular, for quickly setting an autofocus point. 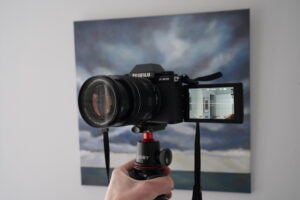 Your other option for composition is the electronic viewfinder. It’s quite small and its image isn’t the sharpest or most natural-looking, but it’s perfectly acceptable for a mid-range model and, like all viewfinders, a godsend to use on a sunny day when glare makes the screen less visible.

Both displays can be user-configured to a degree, and I found the built-in level indicator a particularly handy option. You can also add the likes of peaking indicators for help with manual focus, or turn the rear screen into a display that gives you an at-a-glance view of all your current shooting settings.

This is the sixth camera to come with the X-Trans 4 sensor, and the X-S10 clearly shows that Fujifilm knows what it’s doing when it comes to image quality. A camera using a “cropped” APS-C sensor might lack the headline-grabbing grandeur of a full-frame model, but not everybody needs or wants what full-frame has to offer – and the JPEG photos the Fujifilm X-S10 turns out don’t make it feel like some inferior or compromised product. 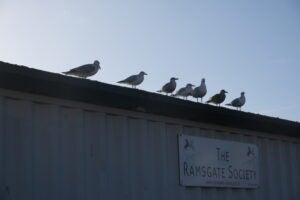 Fujifilm’s Film Simulation modes are a joy to use, too, providing plenty of scope to experiment. Yes, these digital recreations of analogue film types are essentially colour filters by another name, but they’re so well refined and impactful that they don’t feel gimmicky or cheap in the slightest.

I have always loved Classic Chrome for its slightly muted look, but every user is likely to find one or two they favour, whether it’s the washed-out and slightly apocalyptic Eterna Bleach Bypass (a new addition) or the punchy, high-contrast black and white of Acros. Even the default Standard mode offers pleasingly natural-looking images.

If you’re looking for impactful images straight out of the camera, Film Simulation largely has you covered. There’s, of course, RAW shooting too; should you prefer, you can tweak your shots yourself using your editing program of choice. 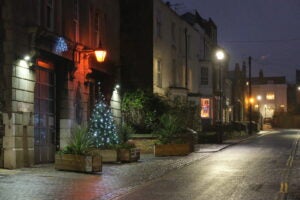 The camera’s extended ISO range of 80 to 51200 is the same as you’d find on the likes of the X-T4 and X-Pro3. I wouldn’t describe it as a low-light master, but it performs fairly well in gloomy conditions. In-body image stabilisation helps greatly here, steadying the camera automatically for longer exposures.

In terms of stills speed, the 8fps continuous mode seems respectable enough – and if you’re willing to switch to electronic shutter and endure a slight crop, this can rise to 30fps. The buffer is quite small, however, so you won’t be grabbing any 10-second bursts totalling hundreds of images.

The hybrid autofocus system works well in all conditions. It sometimes went roaming a little during video recordings without obvious subjects, but in most cases it finds a lock quickly – and, usually, locks onto what you want it to, rather than something in the background.

The thumb joystick on the back, or the touchscreen, make it easy to correct the system on the rare occasions it misses the mark. The accurate face- and eye-tracking is invaluable, and during video recording will capably follow subjects as they move around the frame. This is another helpful feature for vloggers, not to mention street photographers looking to snap subjects on the move. 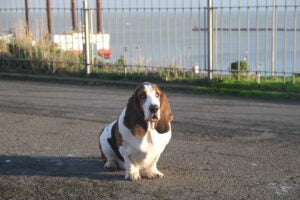 Video quality is impressive. You can shoot crisp 4K footage at up to 30fps, with a drop down to 1080p resolution allowing for faster frame rates: up to 60fps for regular recordings and up to 240fps for smooth slow-motion recordings. You can record 4K clips as long as 30 minutes apiece. The camera doesn’t force a crop with any of its recording modes, which is nice – although it will apply a small 1.1x crop if you use electronic image stabilisation in addition to standard IBIS (you should do this if you’re walking and filming at the same time).

For those of a professional bent, you can record in the flat F-Log profile for better post-shoot colour grading, and externally the camera can capture 10-bit 4:2:2 output for lots of flexibility and dynamic range (you’ll need to connect up an external recording device via HDMI for this). 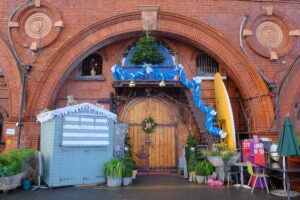 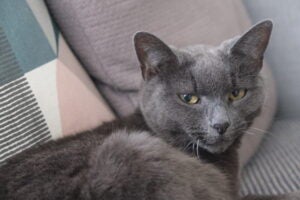 The inclusion of IBIS and electronic image stabilisation is key here, since it allows you to achieve steadier shots with handheld and on-the-move shooting. It won’t replicate the smoothness of a gimbal, but it makes vlogging while walking a lot less nausea-inducing for your potential viewers than it might otherwise be.

Should you buy the Fujifilm X-S10?

It offers strong autofocus, the always useful in-body image stabilisation, great image quality straight out of the camera, and lots of touches that make it a pleasure to use. Vloggers, in particular, will love the front-facing screen, face-tracking autofocus, IBIS and solid 4K video performance – but anyone who wants to dabble in both photography and filmmaking should be impressed with what’s on offer here.