The X-Pro3 is a refreshingly uncompromising camera that knows its audience. Rangefinder fans and film nostalgists will find lots to love here, including an even better hybrid viewfinder and some fun retro touches such as virtual film canisters on its secondary LCD. But it certainly isn't for everyone, and in making the rear LCD a last resort rather than a regular shooting aid, the X-Pro3 risks becoming more a niche curio than a retro revivalist. Nevertheless, you have to applaud Fujifilm's commitment to delivering a genuine alternative to the more mainstream shooting offered by its X-T3 and X-T30 cameras. With the same sensor and processor combination as those cameras, it's shaping up to be a fine street photography sidekick – as long as you're prepared to embrace its eccentricities.

What is the Fujifilm X-Pro3?

When we reviewed the Fujifilm X-Pro2 in 2016, we called it a “truly special camera”. Why was it special? Thanks to its nifty hybrid viewfinder and retro design, it reinvented old-school rangefinders for the digital world.

Three years on its successor, the X-Pro3, continues to carry the mirrorless torch for film nostalgists and street photographers. Only this time it’s doubled down on its eccentricities to create a one-off shooting experience that you’ll either love or find bafflingly convoluted. 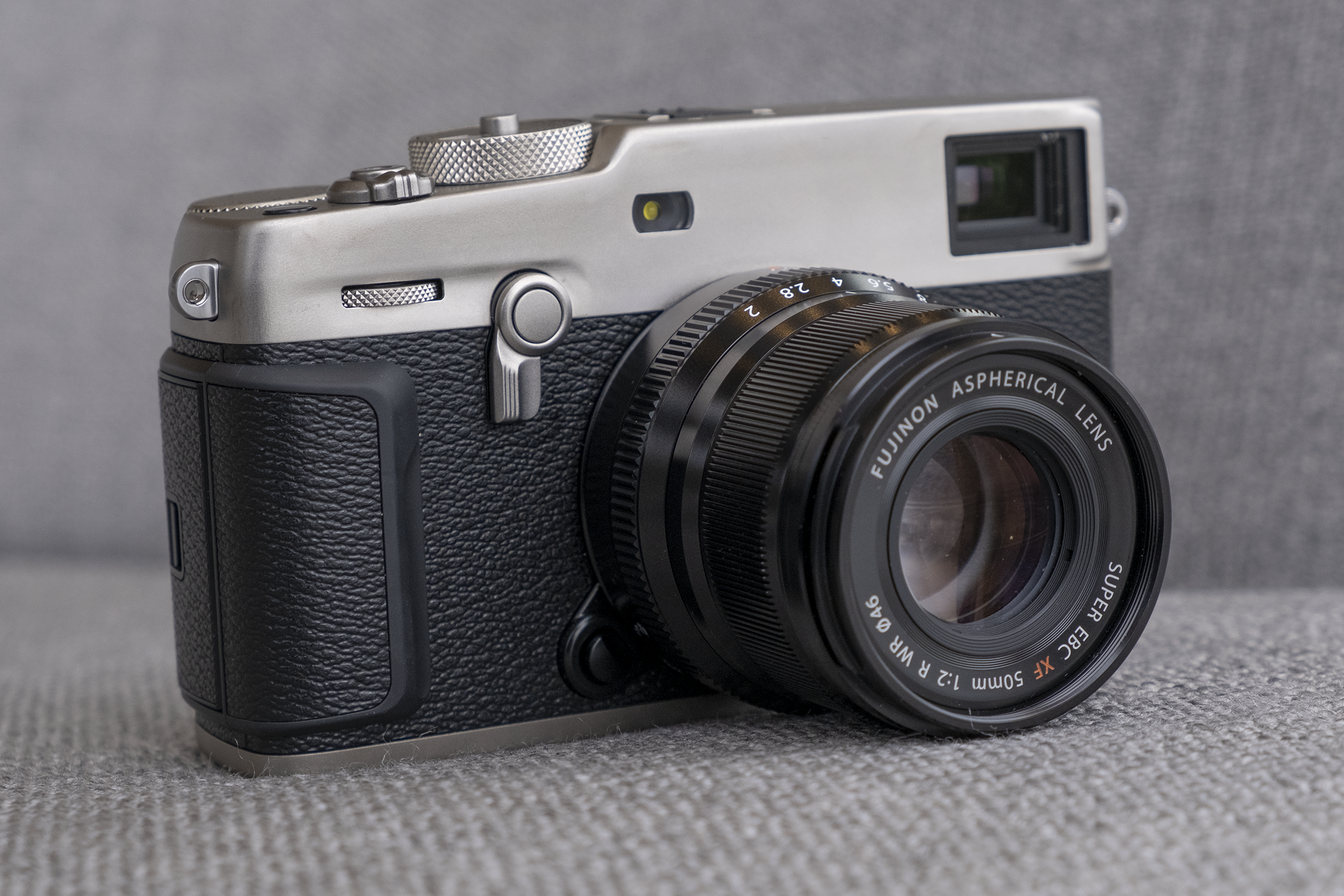 The X-Pro3 certainly isn’t for everyone. Along with that hybrid viewfinder, which lets you choose between an EVF (electronic viewfinder) or hybrid OVF (optical viewfinder), it has a new “hidden LCD”. This folds inwards towards the camera to avoid distracting you from the whole point of the X-Pro3 – composing shots through the viewfinder, just as you would on a film camera.

This is probably the most divisive camera feature since the Leica M-D (Typ 262) arrived with no rear screen at all. Does the X-Pro3 take things too far in the pursuit of “pure” photography? Or is it the charming eccentric the camera world needs to lure folk away from smartphones? I played with one for a couple of hours to find out.

It might look similar to its predecessor, but the Fujifilm X-Pro3 makes three big changes to its design. These are a new titanium coating (on the Dura Black and Dura Silver versions), an upgraded hybrid viewfinder, and that “hidden” LCD.

First to those titanium versions. The top and bottom panels of the Dura Black and Dura Silver versions are made from titanium, which is tougher and more scratch-resistant than stainless steel. 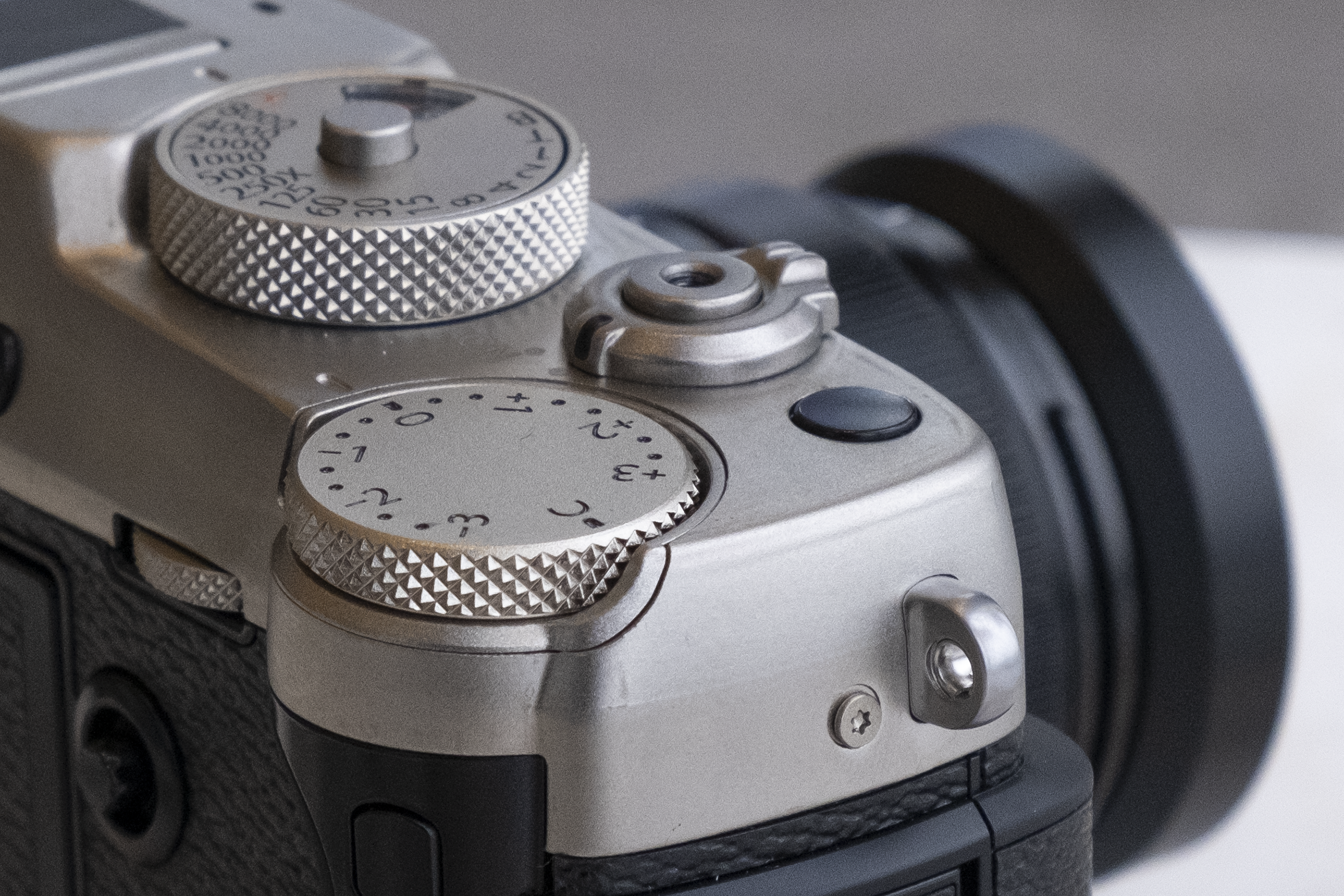 This “Duratect” coating was apparently first developed for premium watches and, since it requires some finishing by hand, adds an extra £180 to the standard Black version’s price tag.

I shot with the Dura Silver version, which felt pleasantly smooth in the hand, and I liked the idea of the top panel remaining pristine – despite some inevitable bumps and knocks. In my opinion, it’s worth the premium.

Still, the whole point of the X-Pro3, compared to the EVF-only X-T3 and X-T30, is its hybrid viewfinder – and this has received a significant upgrade.

Like before, you can move between the EVF (electronic viewfinder) and OVF (optical viewfinder) using a switch on the front. Why would you do this? Because the OVF gives you a view of the whole scene around the actual frame you’re shooting. It can make it easier to compose in busy street scenes, for example, where you need to anticipate action. 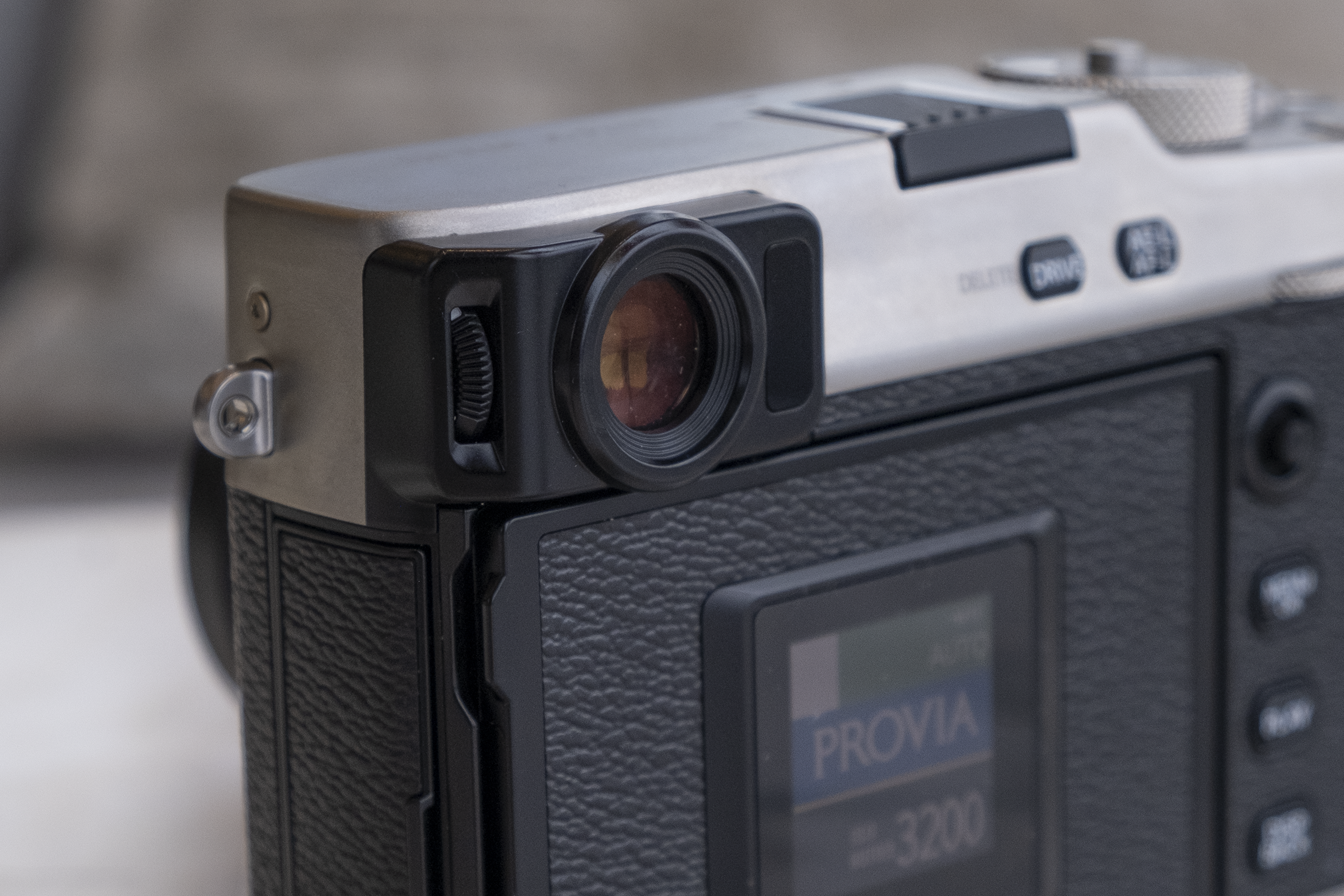 This OVF is now clearer and suffers less distortion than seen with the X-Pro2, with the usual electronic frame-lines to show you the shot you’re taking. But it’s the EVF that’s really been in receipt of a significant upgrade, with a new 3.69-mdot OLED panel that’s significantly brighter and smoother than the X-Pro2’s equivalent.

Lastly, what about that “hidden” LCD? It’s certainly divisive and, while the compromises are probably too great for my preferred way of shooting, I have to applaud Fujifilm for sticking to its guns and making something that’s unique and nods to its heritage. Many cameras feel like they’ve been designed by committee, but you can’t level that criticism here. When the screen is folded up (or hidden), you get a small secondary LCD on the rear. This can either show the film simulation mode you’re in (which neatly looks like a retro film canister) or your basic shooting settings, such as shutter speed and aperture. It isn’t the brightest screen in the world, but can be handy for a quick check of your settings.

If you really must check the screen to see if you’ve managed to nail the focus – and this was a habit I had difficulty curbing in my short time with the X-Pro3 – then you can pull down the screen to check. This is also handy for shooting from low angles, although doing this may draw snorts of derision from other X-Pro fans.

The Fujifilm X-Pro3’s shooting engine has been bumped up to X-T3 levels. It has the same combination of a 26-megapixel X-trans IV sensor and the latest X Processor 4. This gives you burst shooting powers of 11fps with the mechanical shutter, or 30fps if you’re prepared to use the electronic shutter and accept a crop. A couple of small additions are an AF range limiter, if you want to restrict the depth of field to a certain area, and in-camera HDR, which blends three shots together to create what Fujifilm thinks is a more natural HDR look than its rivals. In addition, the X-Pro3’s autofocus also apparently works in lower light than it did previously, down to EV –6.

The slightly cooler, less saturated cherry on top is a new film simulation called “Classic Neg”. Fujiiflm’s excellent digital interpretations of the film looks from its past are one of the X Series’ main charms, and this new one is designed to ape the look of your snaps after they were developed from Superia film.

I was only able to shoot on a pre-production X-Pro3, which didn’t have final firmware. While image quality isn’t likely to change, it’s still too early to be definitive about it.

That said, the early signs are good, with the X-Pro3 producing Fujifilm’s usual excellent JPEGs with punchy but accurate colours. I mostly shot in “standard”, but the street shot at the end gives you an idea of the new “Classic Neg” simulation. 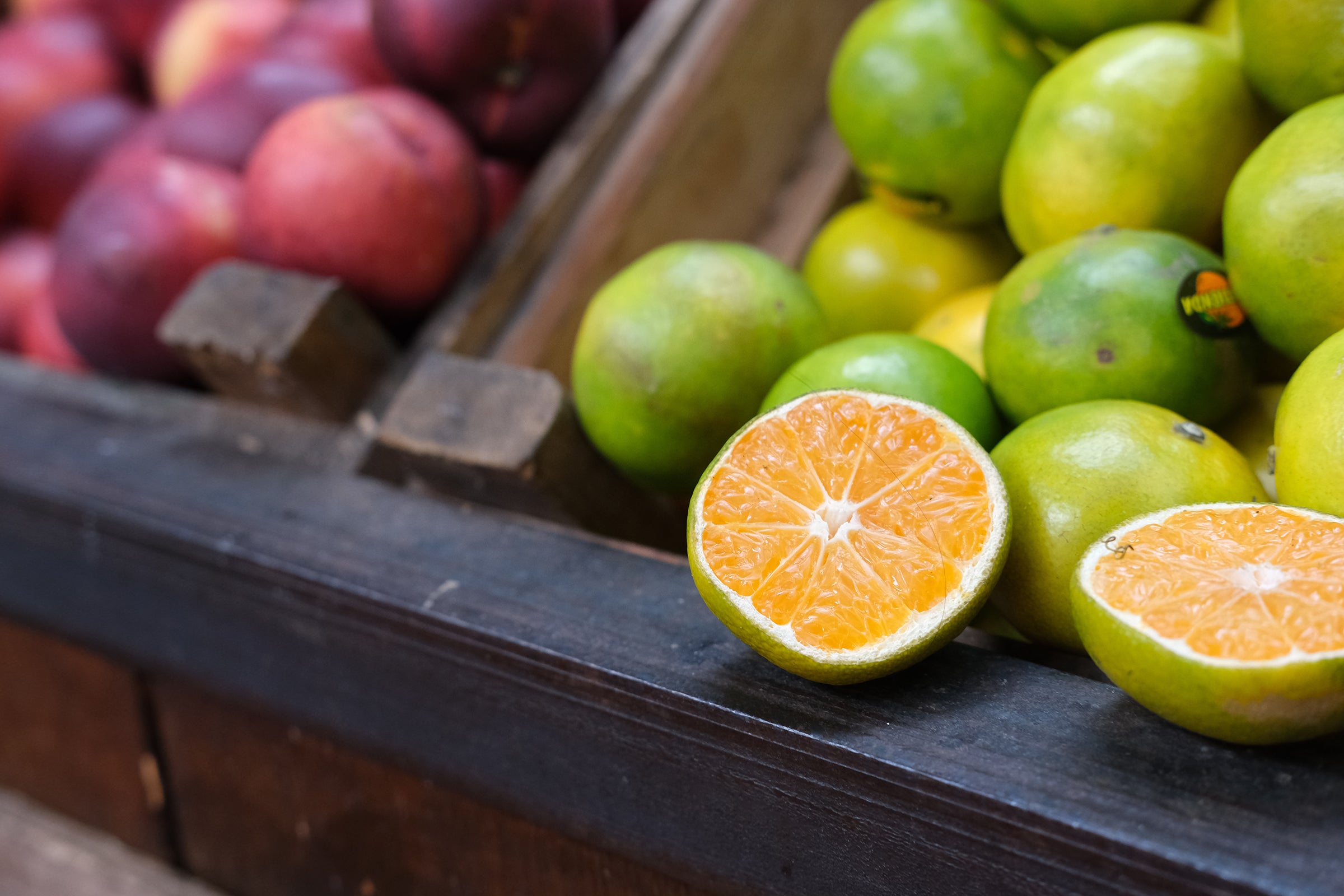 Overall, you can expect Fujifilm X-T3 levels of image quality performance, only with the added twist of being able to compose through either the OVF or EVF.

Like that camera, the X-Pro3’s metering is reliable, although there’s always the exposure compensation dial on hand if you need to tweak it. That said, if you’re used to a camera with more dials, then you might find the X-Pro3’s ISO dial – which you reach by pulling up the shutter speed dial’s outer ring – takes a little getting used to. 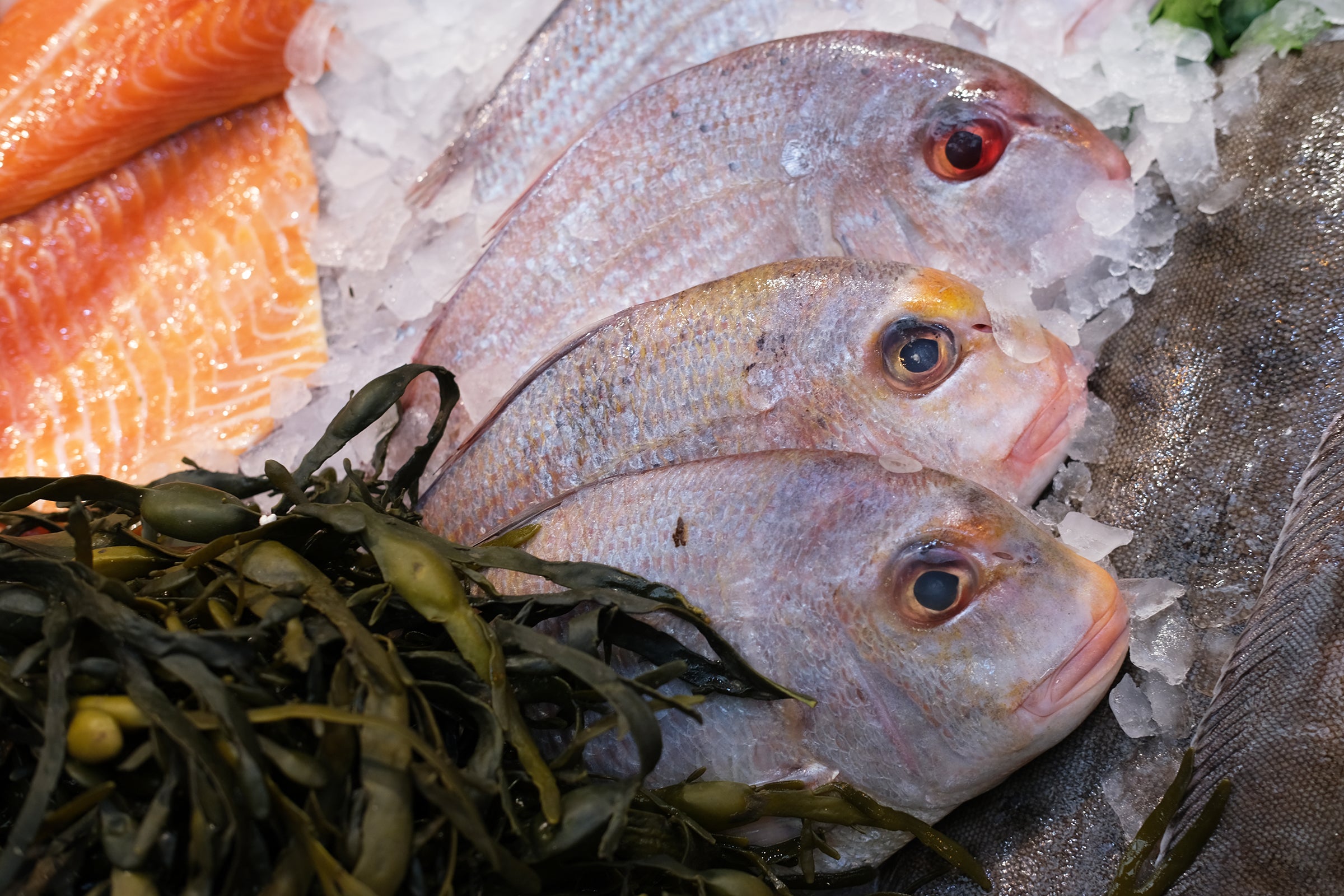 Whether you prefer the OVF or EVF, though, the X-Pro3 is a fantastic camera for street photography, particularly since it’s so discreet and has silent shooting options. I look forward to taking it out for longer than the hour I spent with it at Borough Market for our full review soon. This shot was taken using the X-Pro3’s new Classic Neg film simulation, which is a cooler and less saturated alternative to existing ones such as Provia.