For those without an aerial or suffering poor reception, Freesat has been able to provide an alternative way to get free-to-air TV – although its set-top boxes have always lagged behind Freeview units for features – but the Freesat 4K TV Recorder aims to redress the balance.

It provides Ultra HD content and a brand-new interface that offers catch-up TV content baked-in. Currently, a lack of Ultra HD free-to-air content is a touch disappointing – but this is a box that’s ready for the future, making it an ideal choice for anyone in the market for a new Freesat recorder today.

Freesat has done a good job with the design; it features gentle curves with the clean front home to just the IR receiver. A Bluetooth remote would have been better, allowing the 4K TV Recorder to be tucked away out of sight. A single status light can be found on the underside of the box, glowing blue when it’s turned on and red when powered off. 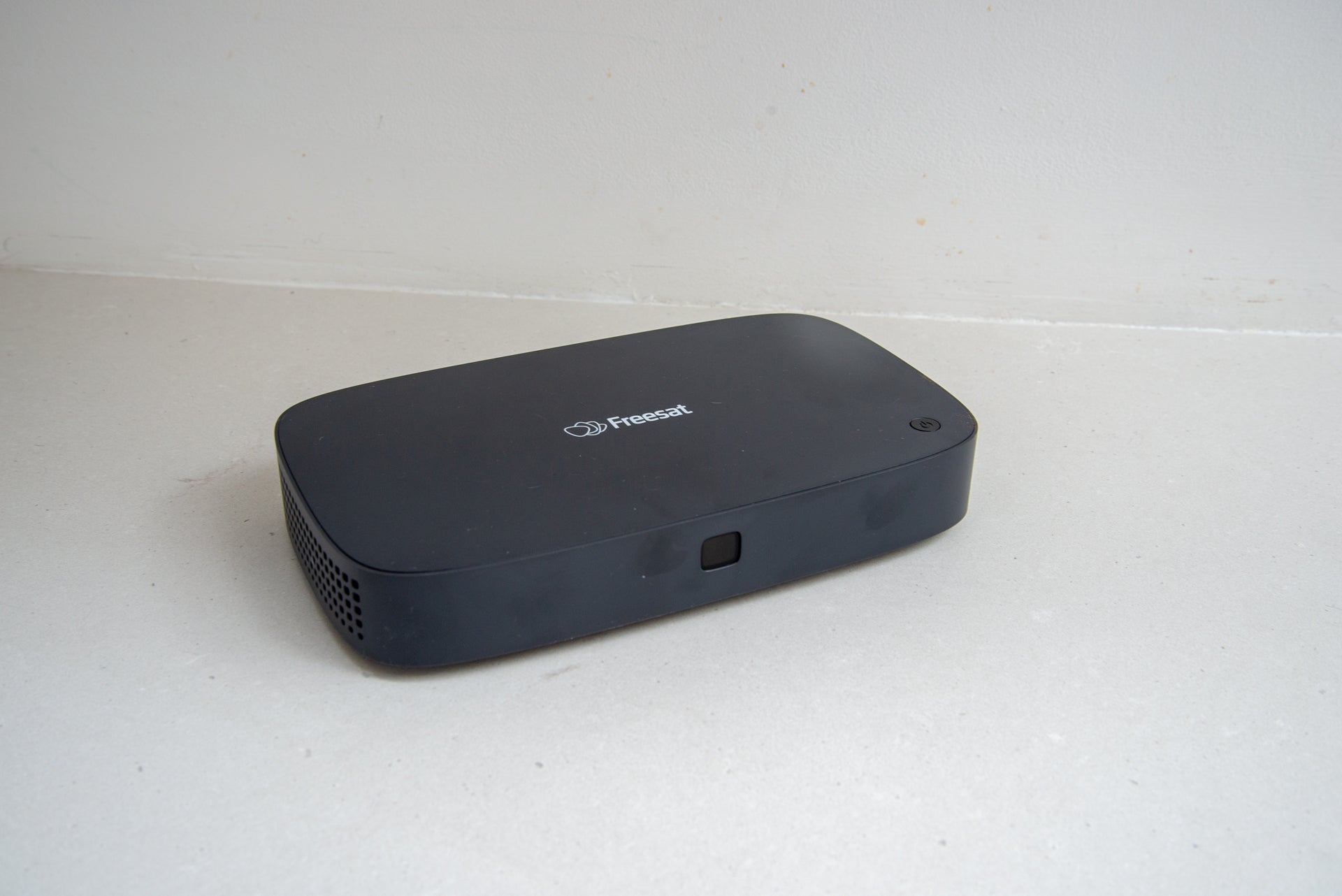 Neat and unobtrusive, this set-top box will look great under your TV

Around the back you’ll find everything you’d expect from a modern set-top box, including an HDMI 2.0 (HDCP 2.2) output with support for Dolby Atmos, Optical S/PDIF for older soundbars, alongside an Ethernet port (there’s also Wi-Fi built in if your router is out of reach of a cable).

There are two satellite inputs, although the type of Low Noise Block (LNB) you have on your satellite dish determines how these can be used. Standard LNBs let you record two channels at once, but if you have wideband LNBs then you can record up to four channels at once. 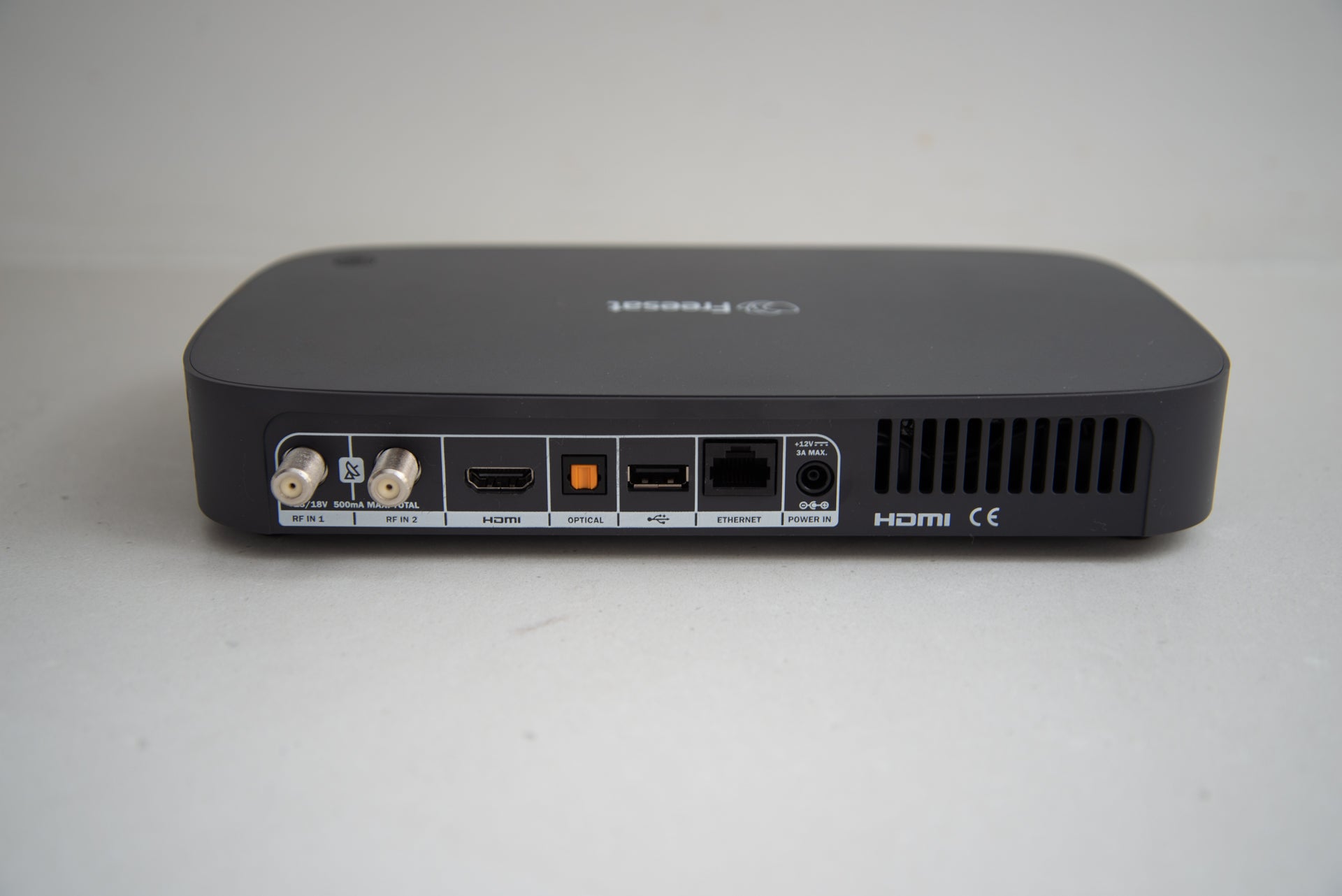 The Freesat features all the ports you could need

I have Sky Q installed, but the makeup of the LNB meant that only one of the feeds worked, providing me with the ability to record two channels at once. If you’re having problems with two inputs then you may need a satellite engineer to check your dish and upgrade the LNB as required.

Both the TV Box and TV Recorders sport the same simple interface. After powering the box on for the first time, a wizard will guide you through connecting to the internet and tuning in channels for your area, based on the postcode you provide.

For this box, Freesat has kept the interface streamlined and fast to respond, with high-contrast text on a dark background making it easy to see what’s going on. Simplicity is the order of the day, with a short main menu that lets you quickly jump to the Guide, your recordings, the on-demand apps and settings.

For most things, you won’t have to touch this menu; the chunky remote control has shortcuts to most of the main features including the Guide, the on-demand section, and the BBC iPlayer, ITV hub and Netflix apps. Strangely, there’s no button to take you to your recordings, which I imagine is probably down to the same remote being supplied with the non-recording TV Box, too. 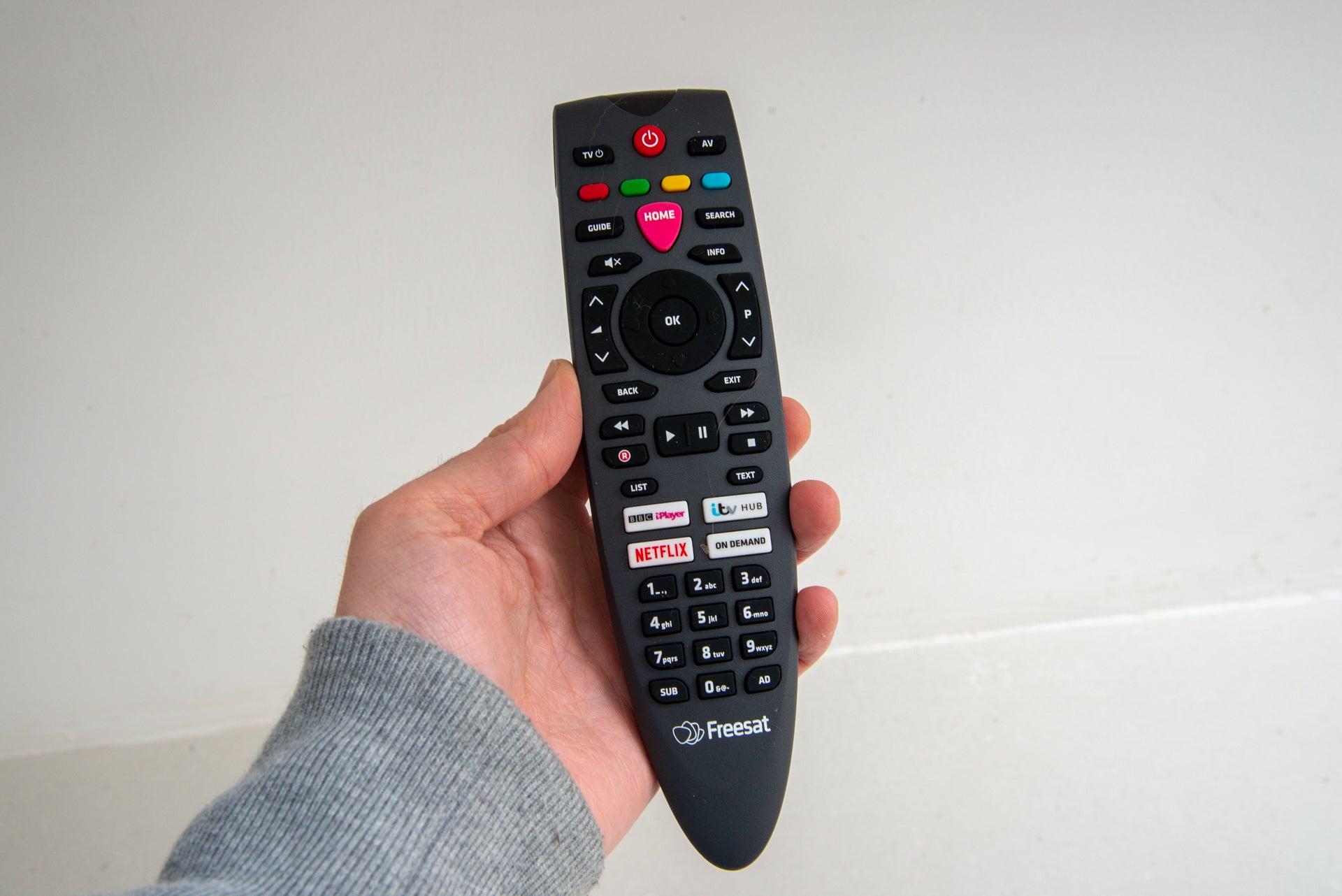 There are shortcut buttons for most features, bar recordings

As with Freeview, Freesat has implemented a scrollback feature in the Guide, so you can jump back up to seven days. If you missed something and it’s available on-demand, you can quickly select a show and have it play in the matching on-demand app in a matter of seconds. Even neater, for some shows, if you missed the start then you can select the Watch From Start option, firing up the on-demand version. 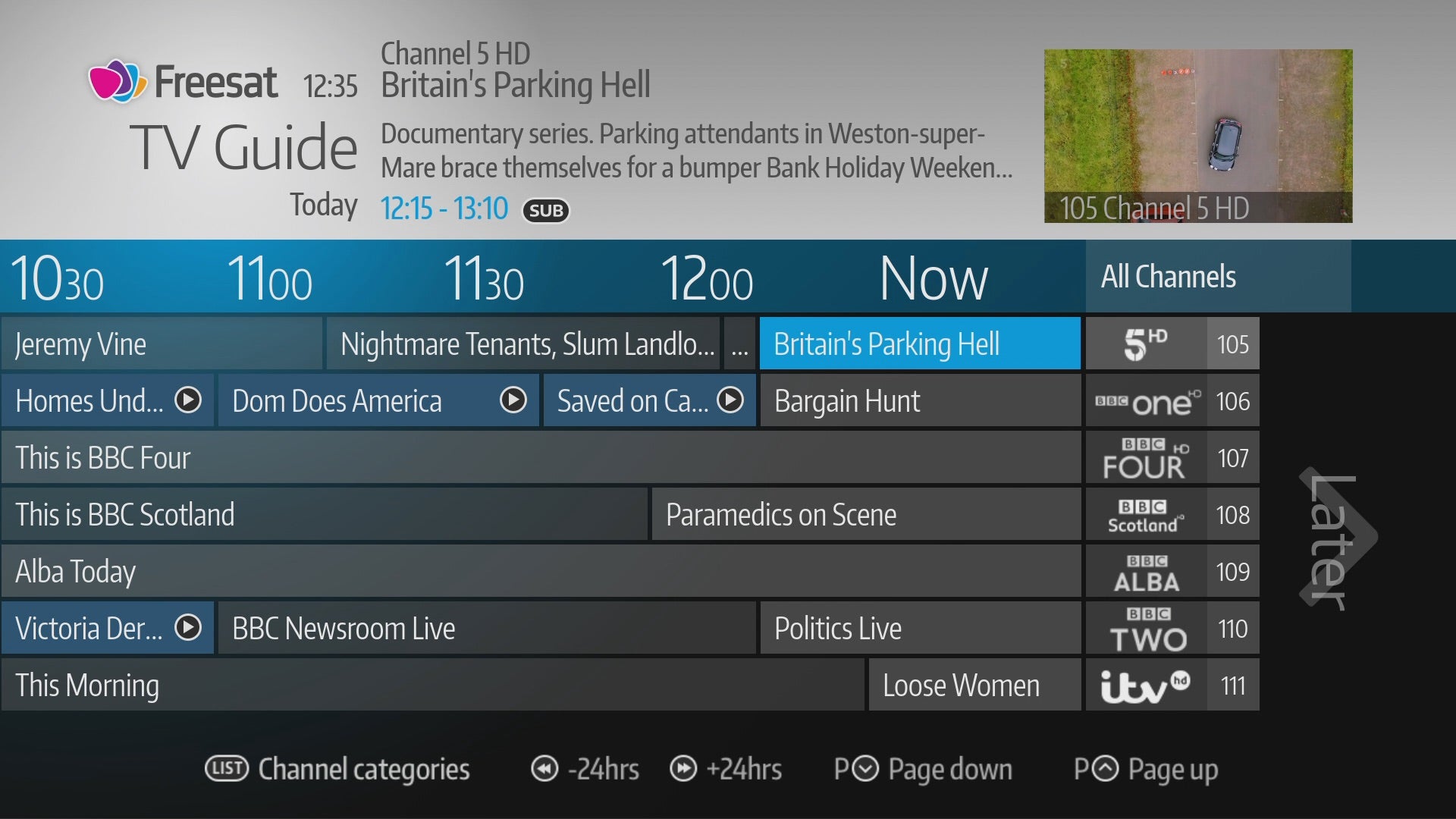 The content available on-demand depends on the TV channel and the on-demand apps available. Currently, Freesat has BBC iPlayer, ITV Hub, My5, STV Player and UKTV Play, which covers most of the main free-to-air channels – but there’s no support for All4. Having the full selection of on-demand apps means you can at least access a large amount of back catalogue content. 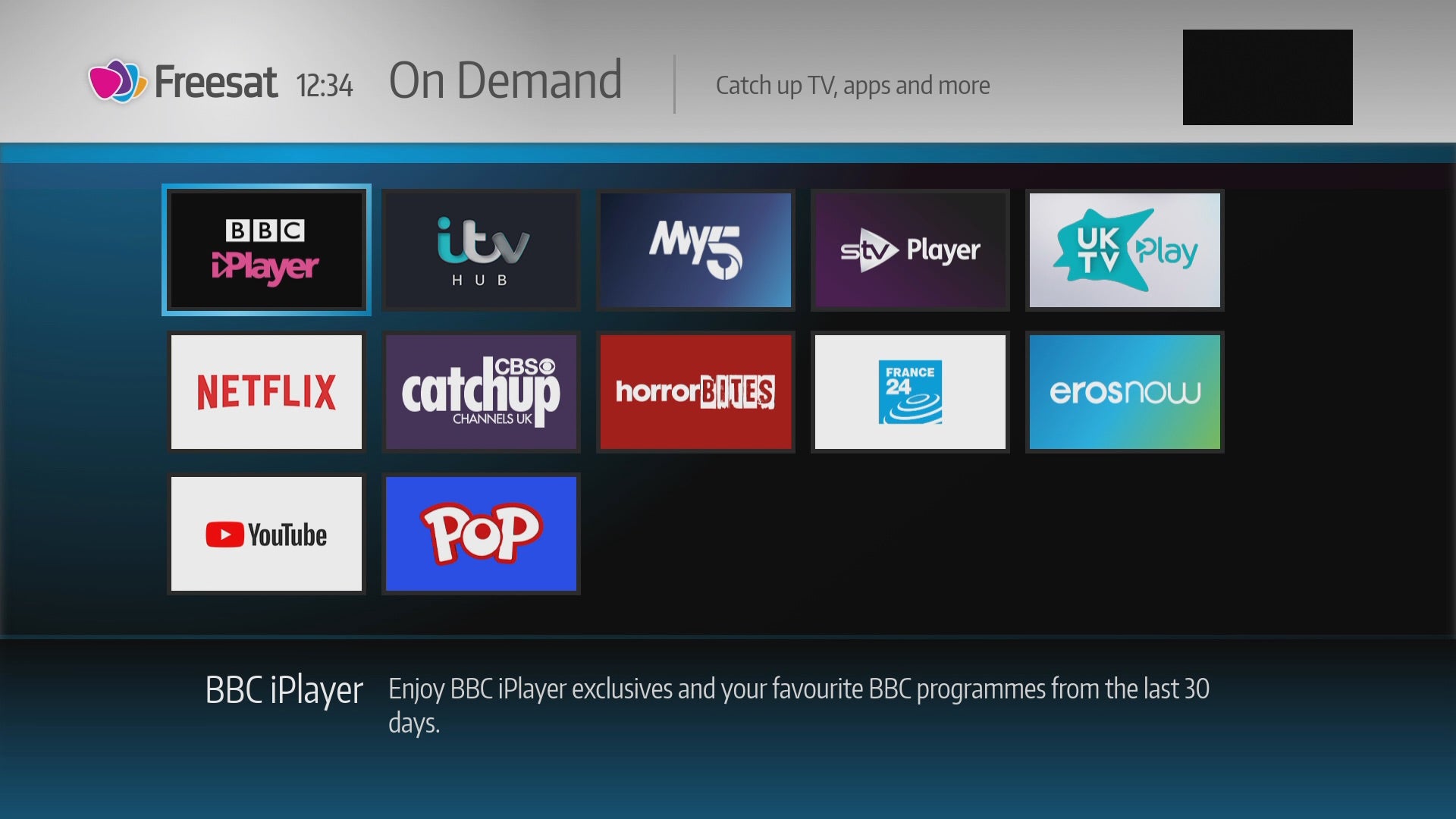 If you find a programme you want to record in the Guide, you can just hit the R button on the remote control; you’re given a choice to record just the one show or the entire series. You can also record a show while you’re watching it, although this overlays the entire screen with a massive dialog box asking if you want to record the series; it’s a touch intrusive. As you’d expect, you can also pause Live TV. 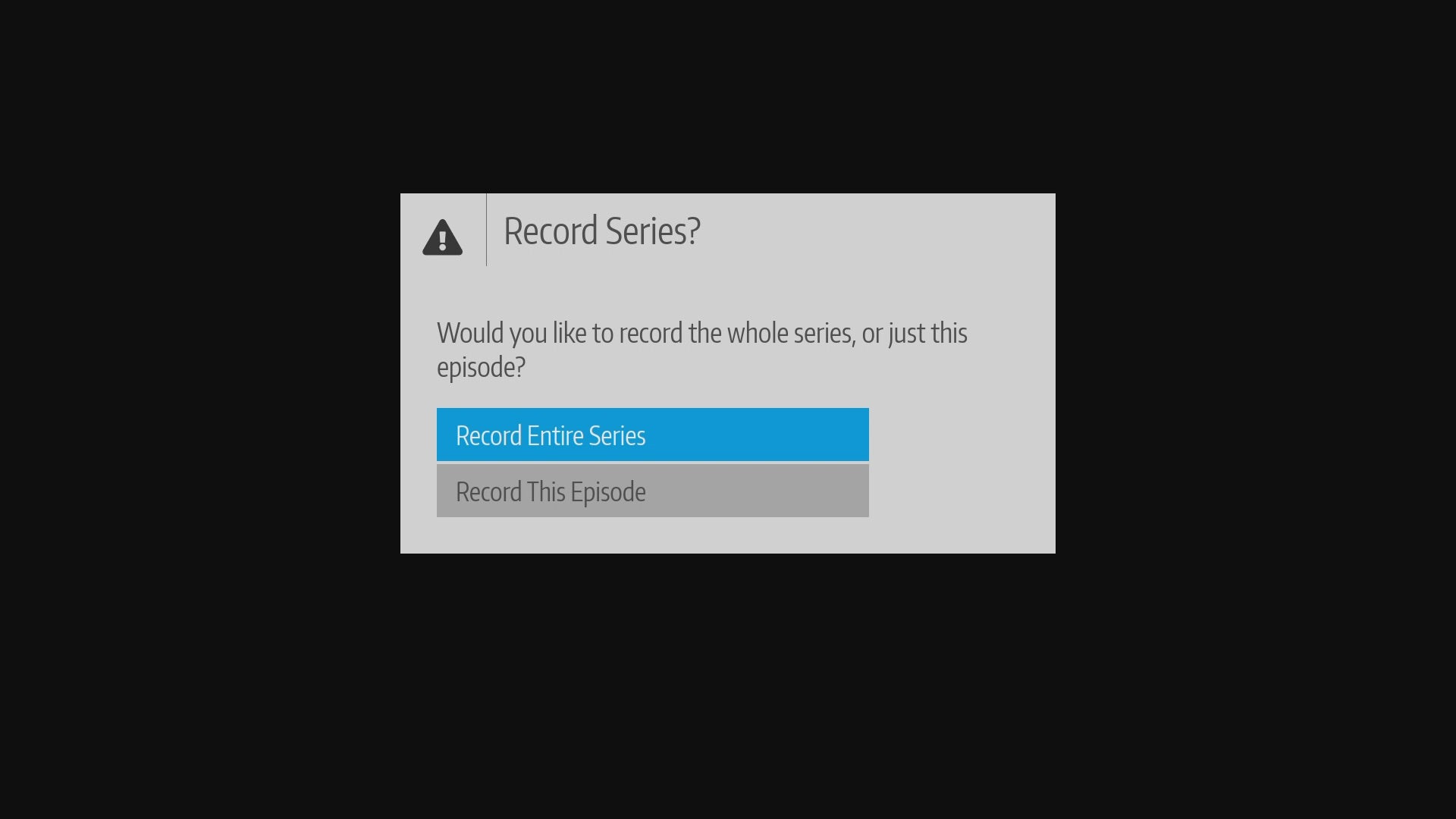 The full-screen recording dialog box is a little intrusive

Channel choice is pretty good, with more than 180 channels of which 24 are HD including the BBC channels, ITV and Channel 5 in HD, plus some additional choices including Al Jazeera and CNN International; Channel 4 HD has just returned to the service, too.

Although a 4K set-top box, don’t get too excited about content at this resolution since there are no live Ultra HD channels available today. However, the 4K TV Recorder is capable of receiving them, but there needs to be investment and support from the channels. Today, if you want to use this box for Ultra HD content then you have two choices: Netflix and YouTube.

There’s a mobile app, which lets you record shows on the move – although it does warn you that sent recordings can take up to 30 minutes to reach your box, so try to record early if you can. When you first launch the app it searches your local network for a Freesat box, so you can remotely record it. The app wouldn’t find the 4K TV Recorder and the Freesat website says that it only supports the Humax HDR-1100s boxes for this feature. 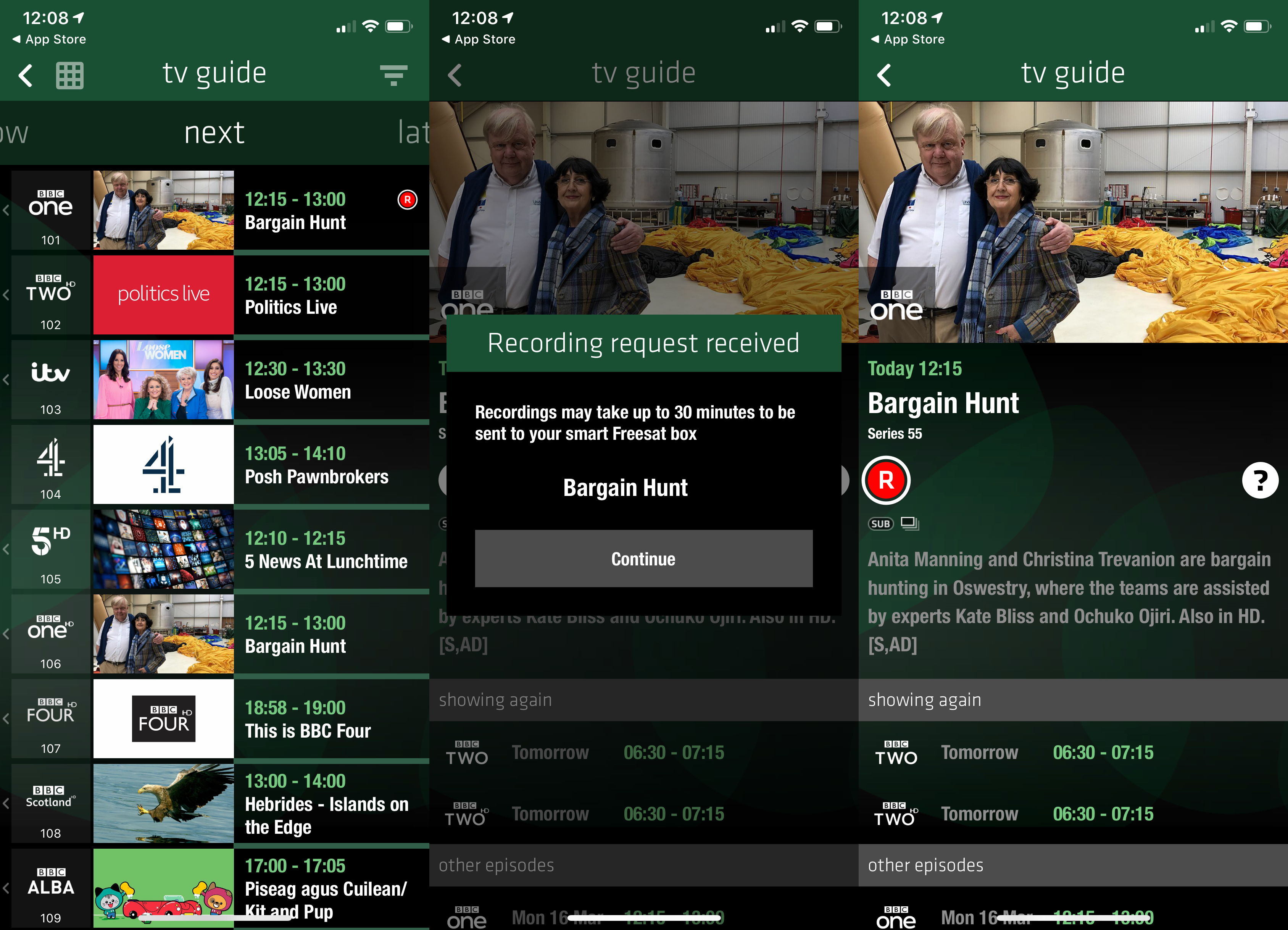 The app lets you remote record

Broadcast TV channels are as good as the source material, and it’s best to stick with HD channels where you can. The best HD channels, such as BBC, produce sharp and detailed images with no artefacts.

With SD channels, you’re more limited, although the Freesat 4K TV Recorder does a decent job of reducing artefacts. Even so, SD can look a bit soft around the edges. Neatly, Freesat will prompt you if a channel is available in HD, allowing you to quickly jump to the better-quality version.

Ultra HD content is only available via YouTube or Netflix. Firing up Netflix, I immediately noticed that 4K content only gives the option of HDR10, not Dolby Vision. That’s a shame since Dolby Vision is a superior standard – and one my TV supports. Still, at least there’s HDR support. 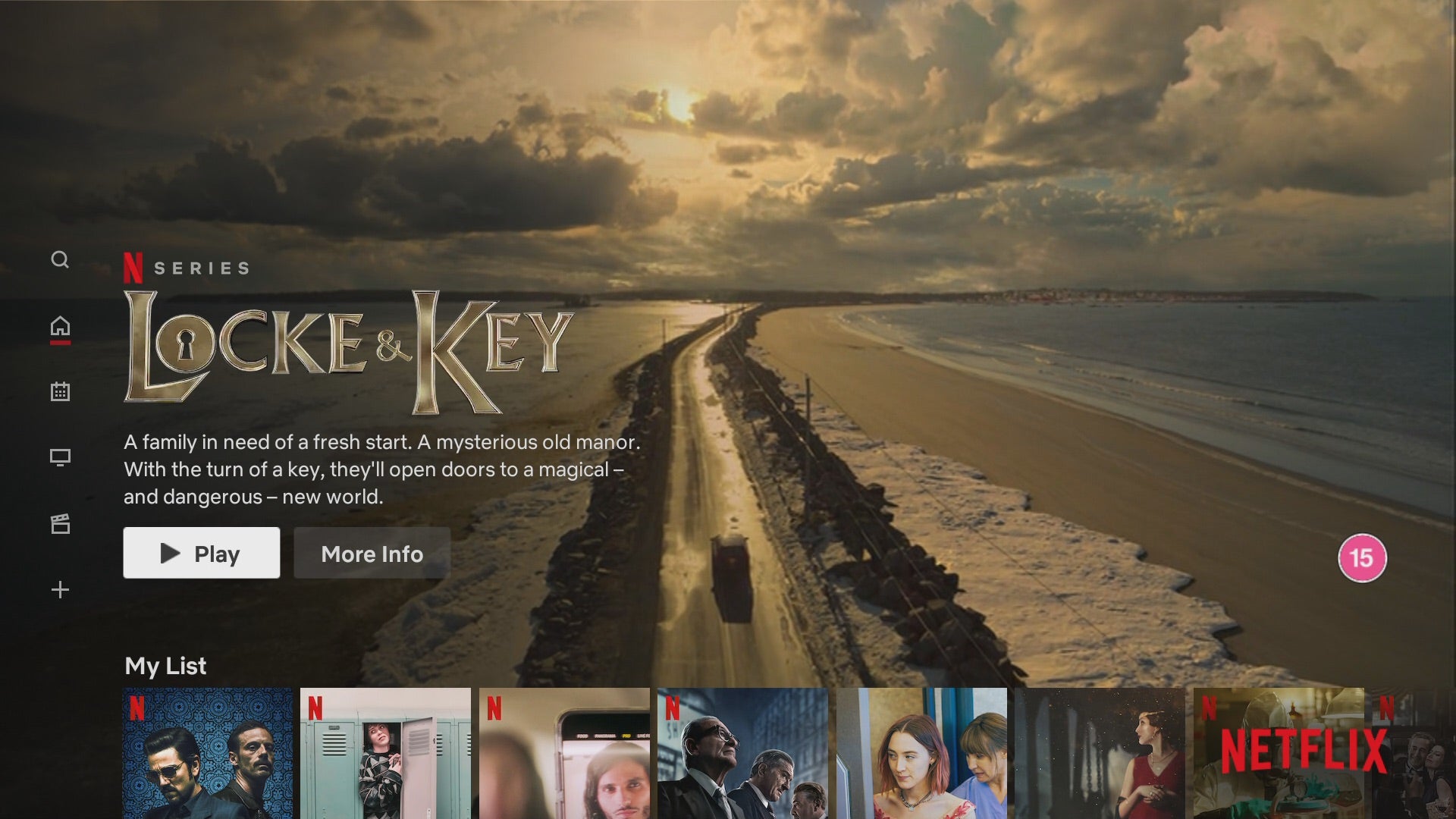 Netflix gives you HDR10, but there’s no Dolby Vision

Even with standard HDR, 4K Netflix looks great from the Freesat 4K TV Recorder. Beyond highly detailed images, the colour space and impact of HDR makes the content shine. Watching the first episode of The Witcher, you get the full sunlit beauty of Stregobor’s home, while the final fight scene is played out to show all the dark, grimy and brutal action. Yet, the player seemed a touch buggy with the odd screen flicker. Watching the same scenes on my LG TV with Dolby Vision, the action was smoother and the picture a touch more detailed.

Other on-demand content is played back at the maximum resolution supported by the player. Take BBC iPlayer, for example – the HD version is sharp but not as detailed as the live broadcast. Sky Q, in comparison, has the full broadcast quality shows for its on-demand content, letting you download the show in full.

Whether or not you buy Freesat will still mostly depend on where you live. If you live in an area with good reception via an aerial, a Freeview Play set-top box is likely to be a better option, as you get Channel 4 in HD and the All 4 player.

The rival Manhattan T3-R is a decent choice, also providing Ultra HD support when it’s available, although it doesn’t have Netflix integrated.

If you live in an area where Freeview reception is poor, Freesat is your friend – and the 4K TV Recorder a great way to watch and record today, with support for Ultra HD lined up for the future.