The set’s practical viewing angle seems slightly wider than the LCD norm too, and we were very surprised – given previous experience with passive 3D TVs – to find the 32F7020-T suffering with just 32ms of input lag. This means the set shouldn’t have a negative impact on your gaming skills, so if you end up getting slaughtered on Call of Duty it’s your fault, not Finlux’s.

Feeding the 32F7020-T some 3D movies and Sky sources, our first unfortunate thought was that we just don’t understand why anyone would want to watch 3D on a TV as small as 32-inch. Maybe, at a push, we could just about imagine it having a point for people sitting just a couple of feet from the TV while using it as a 3D gaming monitor. But in a normal room setting 3D on a 32-inch TV just looks like you’re watching a weird hole in your wall, rather than being immersed in a 3D world.

There’s also more crosstalk double ghosting noise in evidence than we’re accustomed to seeing with passive 3D technology. Or to be more accurate, bizarrely there’s more crosstalk in parts of the picture than we’re accustomed to seeing with ANY 3D TVs, active or otherwise. On our sample, for instance, the top left corner of the image suffered much more heavily with crosstalk than the rest. We have no idea why this might be the case, but it happened with two different sets of 3D glasses, so it can’t be a flaw in the first set of glasses we tried.

It’s worth adding, too, that as usual with passive 3D TVs, crosstalk becomes a pretty big problem if your vertical viewing angle gets to only around 13 degrees above or below the screen. This problem doesn’t often crop up with large screens, but it regularly troubled us during our tests of this 32-inch set.

On the upside with 3D, there’s no flicker, and 3D images generally look quite bright and colourful. Also, the smallness of the screen does have one benefit, since it means that you don’t see the horizontal line structure and jagged object edges commonly visible on larger passive 3D TVs. Plus, of course, it’s handy that four people can watch 3D at once on the 32F7020-T without having to purchase any extra glasses. Nonetheless, overall we wouldn’t describe watching 3D on the 32F7020-T as being a particularly rewarding experience.

Leaving the 32F7020-T’s pictures behind to focus on its audio, the TV sounds marginally better than most budget TVs. Though that isn’t saying much… 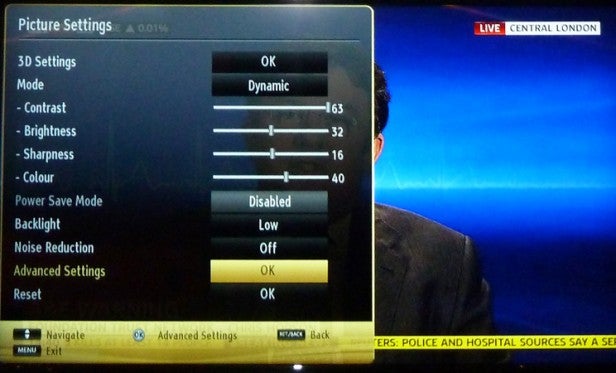 The ‘above average’ stuff concerns the volume levels the TV can hit without causing distortions and cabinet rattles, and a mid range that’s open enough to leave vocals sounding reasonably clean even during loud scenes. However, there isn’t much bass around to support action scenes and the treble range quickly becomes cramped when the going gets tough – a combination that regularly results in action scenes sounding distractingly harsh.

If you really can’t muster any more than £280, even if you save up for a month or two more, then we guess the 32F7020-T is an adequate budget proposition. For just £20 more, though, you can go for the superior, 2D only Finlux 32F8030-T. Unfortunately because Finlux 32720-T has its contrast issues, rather basic colourscape, and to some extent irrelevant 3D pictures it’s far from one of Finlux’s finest hours.