Available on Xbox 360 with Kinect

Introduction
If Lionhead’s quest with Fable: The Journey was to fashion an Xbox Kinect game that resonated with the more traditional, hardcore gamer, then it’s a quest that ends in failure. While it uses characters, creatures and locations from the Fable universe, and has a similar visual style and sense of humour, little of Fable’s gameplay has survived the transition to Kinect. This isn’t an RPG or an adventure. There’s no freedom to explore, no way to build a reputation or create your own hero. It’s an on-rails experience with chase and shooting gallery sequences, and the games it has most in common with are those visually spectacular but only semi-interactive experiences we first encountered in the early days of CD-ROM. 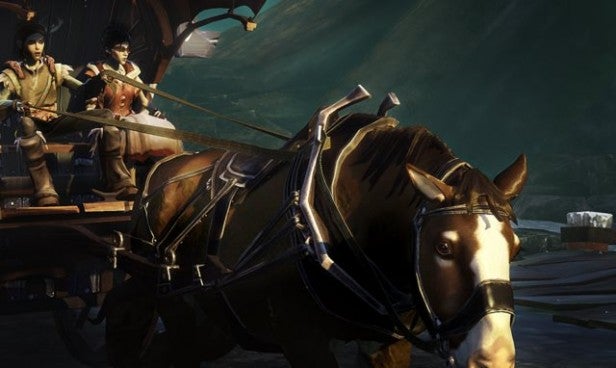 We’d best get over it. Fable: The Journey isn’t what we really wanted it to be. The question is whether it’s all that good at being what it is. Here there’s good news and bad. It’s a stunning looking game with high production values, likeable characters and a decent story, and there’s enough Fable lore and Fable charm to interest fans of the series. However, it’s a game that can also feel lazy, repetitive, boring and frustrating. Most of all, you can’t help feeling that Fable: The Journey started off as someone’s vision for a Kinect-based adventure, but has ended up as a game built less to celebrate the strengths of Kinect, than hide its weaknesses. 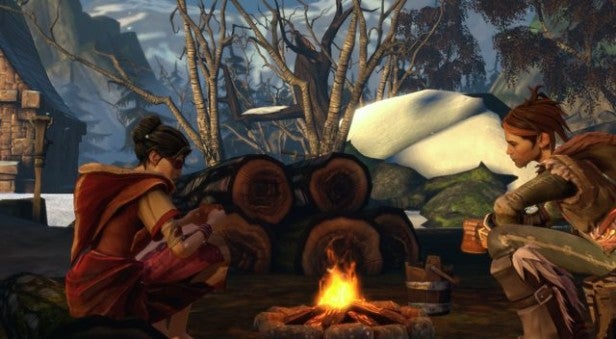 Fable: The Journey Storyline
Here you play as a young nomad, Gabriel. Separated from his tribe, Gabriel becomes entangled with the struggles of the Fable saga’s resident seer, Theresa, as she battles against dark forces threatening Albion. With Theresa’s aid, Gabriel finds and dons a pair of magic gauntlets, and so begins your classic hero’s journey, taking in a grand quest through the more scenic parts of Albion, fights against Hobbes, Hollow Men and Balverines, and assorted temples, abandoned villages and ruins where further powers may be uncovered, and further dangers revealed.

In practice, this actually means a handful of basic activities. For a start, there’s a whole lot of cart driving, involving shaking the reins to speed up, pulling back to slow down and moving your arms forwards and backwards to drift left and right. These sequences are enlivened by (non-interactive) conversation, different types of ground and experience gems to collect, some of which can only be gathered when moving at specific speeds. This is, at best, gently diverting, with the experience only made enjoyable by some magnificent scenery, and by the odd moment where the route branches, and optional stopping points where you might find a fight or a puzzle, and usually a treasure chest as some reward. 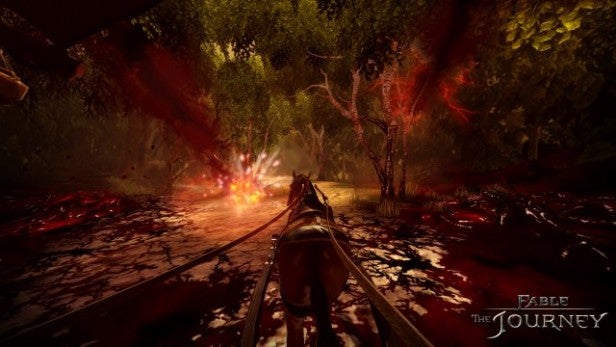 Occasionally, though, just driving transforms into a proper chase, with the forces of corruption narrowing the path, and heavy objects falling from the sky. These sequences are spectacular, but it’s questionable whether they’re actually that much fun to play. The least that can be said is that the game is fairly generous with health and checkpoints, so you’ll usually get through without grinding any teeth down.

As you’ll invariably take some damage in the first two activities, you’ll also find your share of rest stops, where you can care for your cart-horse, Seren. First, Seren needs to be calmed down with calm words and gentle gestures, and then it’s a case of pulling out any splinters or arrows (a nice, smooth pulling motion works best), then using your magic gloves to heal the wounds. With Seren taken care of you can then enjoy the sheer thrills of, erm, pumping water into a trough, picking apples from a tree, giving Seren a nice rub down and opening the handily abandoned chest. This is exactly as exciting as it sounds.

Fable: The Journey Controls
The real point of Fable: The Journey, however, is the action sequences. Some take place on the cart while some take place on foot, but what we’re talking about here is classic light-gun gameplay, as you aim and fire your magic spells with frantic thrusts and waves of your soon-exhausted extremities. The right hand starts off with a handy bolt spell, with a neat aftertouch feature so that you can guide the bolts around columns or over barricades. 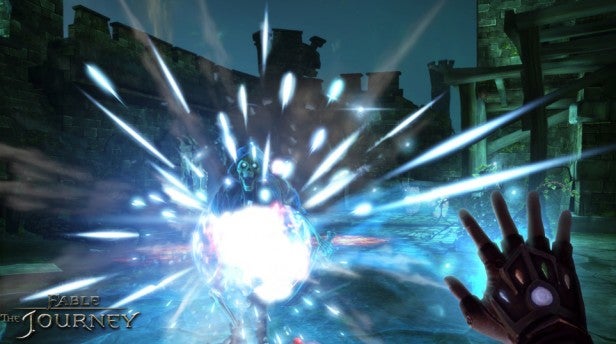 The left-hand, meanwhile, works to push enemies away, erect a shield with a nifty blocking gesture, or stun and occasionally drag enemies with the assistance of a tendril of magic force. Predictably, some enemies need to be repelled or stunned with the left-hand before you smack them down with the right, and the gauntlets have only so much charge, to discourage you from too much crazed flailing at the screen. 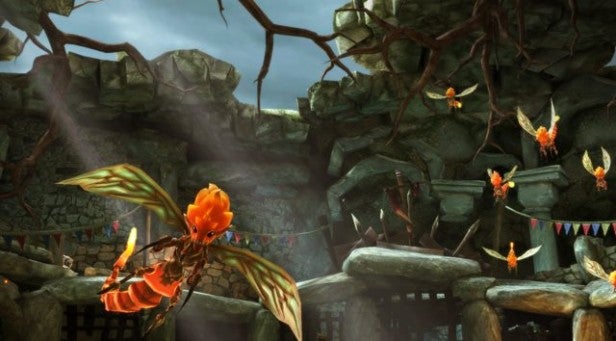 These sequences are entertaining, but there are problems. Despite some very clever auto-calibration features it’s a challenge to maintain accuracy for any great length of time, and the block/counter gesture isn’t always reliably picked up. Some sequences suffer from poor or non-existent checkpointing, and when you combine this with hard-hitting monsters it all gets quite frustrating very fast. There’s also just not that much variety. Like any lightgun game, there are only so many variations on so many scenarios you can do, and while there are some great moments where the challenge suddenly changes, it all gets a bit samey after a while. 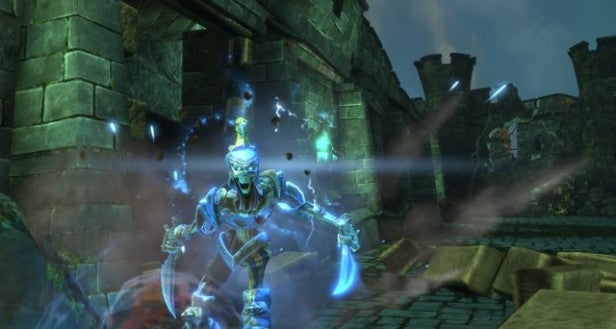 At times, Fable: The Journey threatens to bloom, with some interesting dungeon sections that mix puzzle-solving through manipulation with the left-glove and blasting in equal measure. Things also improve as you grow more powerful and gain more spells, though charging up a fireball isn’t always easy, whether you do it by waving your hand or by shouting ‘Fireball’ in a way that’s guaranteed to annoy your entire household. When all is said and done, though, there’s just not that much to the game. It’s lengthy and it all looks very lovely, and the story works reasonably well. There are slightly pointless collectibles to discover and an arcade mode which reframes the action sequences from the game, and it’s all very slick and very polished. It just makes you wish that there was a way motion controls could have been incorporated into a more genuinely interactive game. 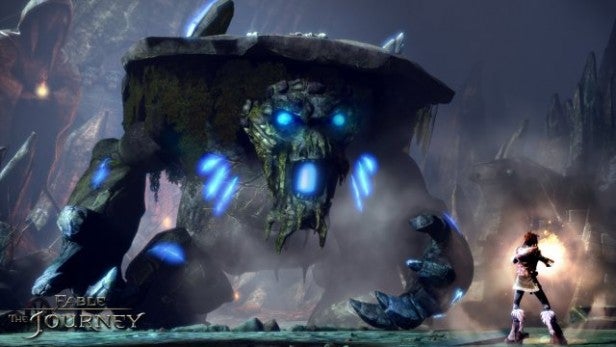 One interesting comparison point is that the Sony developed Sorcery; a game that was far from perfect, but which combined PlayStation Move based spell-casting with more conventional navigation controls to make something that felt like a meatier, more satisfying quest. Sorcery fell down through its lack of imagination, but Fable: The Journey’s imagination is all in its story and its visual design. The feeling overall is that, rather than work out what Kinect could add to Fable, the team spent more time working out how Fable might work within the limits of Kinect. The result is fabulous-looking and occasionally quite entertaining, but not all that satisfying to actually play.

Fable: The Journey Verdict
Rather than sell Kinect, Fable: The Journey does an efficient job of highlighting its weaknesses. For all its visual beauty and engaging story, it’s not anywhere near as interesting or interactive as the series it stems from, and the repetitive gameplay loses its allure after a while. Throw in some of the usual frustrations of Kinect controls, and you have a game with a certain amount of appeal, but little in the way of real satisfaction. It’s neither a great Fable nor Kinect’s finest hour.