Exclusive to Xbox 360
We’re a society that thrives on nostalgia, so it’s only natural that games should go the same way as films and music. Here we go, then, with the celebratory reissues, the remakes, the HD remasters. Sometimes these work brilliantly, like Sony’s HD rereleases of Ico and Shadow of the Colossus, or Nintendo’s Wii U remake of Legend of Zelda: The Wind Waker. At other times, well, when it doesn’t work it all backfires, with a remake that makes you wonder if a game you thought of as a timeless classic ever deserved that kind of acclaim. 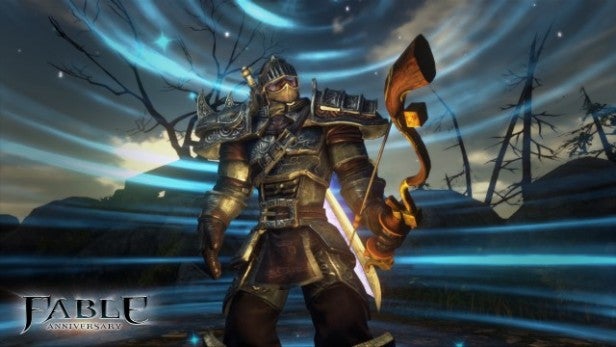 Here’s the problem: Fable Anniversary reveals that while Fable is still a fine game, it simply hasn’t worn that well. When the original Fable was released in 2004 it seemed revolutionary. Here was an RPG built around simple mechanics, where your protagonist could be changed by his experience of the world, and the world could be changed by your protagonist. Work for good, help people and build a reputation as a hero, and you would shine with virtuous energy, the people hailing you everywhere you went. Do evil, hurting people and spreading violence and destruction as you went, and you’d look twisted and demonic, inspiring fear and loathing in the general population.

Here was an action RPG where you would age and where you’d scar, where you’d grow mighty, muscular or fat depending on your actions. Admittedly, Fable failed to deliver on some of its promises (remember all the stuff about acorns sprouting into trees?) but at the time it seemed amazing. Now, though? Not so much. In fact, what’s shocking about Fable Anniversary is how badly dated it seems. 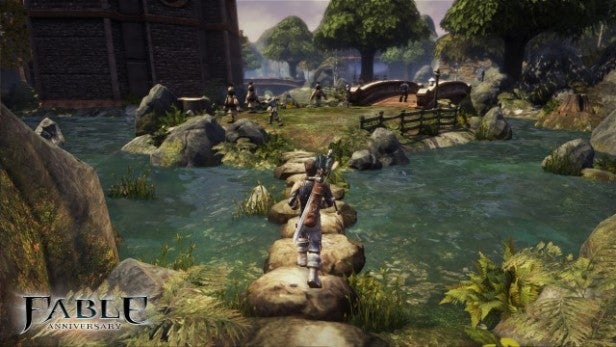 Take the world, for example. Nowadays we’re used to open fantasy worlds of incredible depth, with endless scope for exploration. Fable Anniversary gives us small chunks of dungeon or open wilderness – often just a few branching paths to follow – strung together by artificial gates and irritating map/loading screens. The combat-heavy gameplay has its share of problems too. Your enemies are dumb, predictable and lacking in variety, with little strategy beyond surrounding you and stomping you into the ground. An oversupply of health and resurrection potions makes things artificially easy; even more so than in the deathless Fable 2.

Sure, you can spend your time in the towns, using Fable’s still enjoyable expressions system to impress the girls with your biceps or pantomime chuffs. Sure you can get married and set up home with a girl in every town. Look beyond this stuff, however, and it’s surprising how little depth the core RPG gameplay contains. 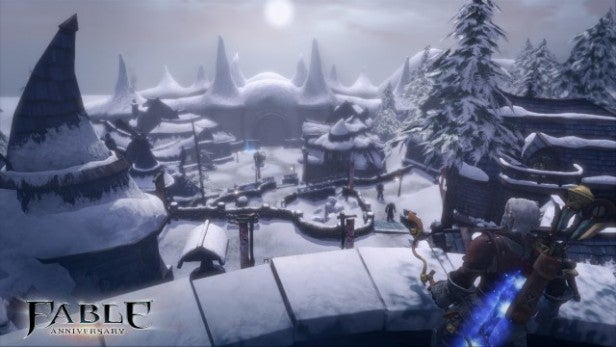 Presentation is a mixed bag too. Thanks to an Unreal 3.0 engine makeover, Fable Anniversary undoubtedly looks much better than the original, with new character models for the most important cast members, new textures and new water effects, not to mention a whole new lighting system. Yet beneath the modern-looking surface you can still see the spectre of the original’s primitive landscapes, not to mention the stilted, artificial animation. The pre-rendered, stained-glass cinematics haven’t weathered too well, and the less said about the close-ups in the cut-scenes, the better. To make things worse, the frame-rate isn’t always smooth, frequently jagging or glitching even though there’s not that much happening on the screen.

Now, none of this means that Fable Anniversary isn’t fun. Fable always had three things on its side – charm, humour and a decent story – and all three are still present and correct. It’s a reasonably lengthy game if you put in the time to tackle the side-quests, and the Lost Chapters expansion is now bundled in. Lionhead has also put a lot of time into refining the interface and the controls, making it easier to manage your inventory and making the combat work more like it does in Fable 2. Attacks, blocks, ranged-attacks and spells are now assigned to specific buttons, while the D-Pad and a right-bumper modifier give you quick access to the most-used items and magic. It all feels fluid, if a little scrappy, and the worst thing we can say is that auto-targeting is an absolute disaster, where you’re as likely to throw your fireball at a barrel or bystander as the bandit rushing towards you. 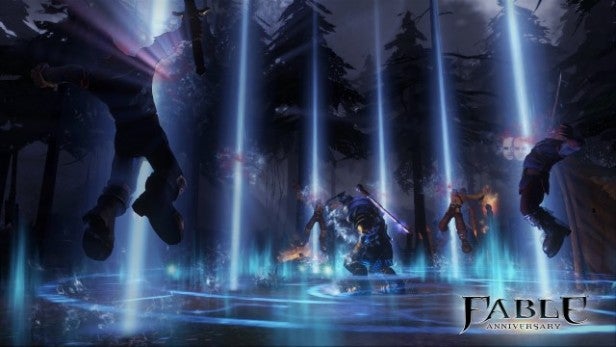 The systems for upgrading and customising your hero have also aged well. By focusing on specific skills or perks you’re encouraged to build your hero organically rather than conform to someone else’s preset class, and all the governing statistics are kept mostly in the background. A new beard of hairstyle is just a matter of taking a card with your chosen look to the nearest barber, and you can match your clothes and armour to your hero’s personality, with plus and minus points to your good/evil alignment.

Most importantly, the land of Albion retains its easy-going charm, with a peculiarly British take on the usual Tolkien fantasy, full of regional accents, new spins on old folklore and deliberately daft gags. While it has a serious tale to tell, Fable is the perfect antidote to all those po-faced blood-and-thunder RPGs. It’s smart, self-aware and playful in the way many of the best British games have been. 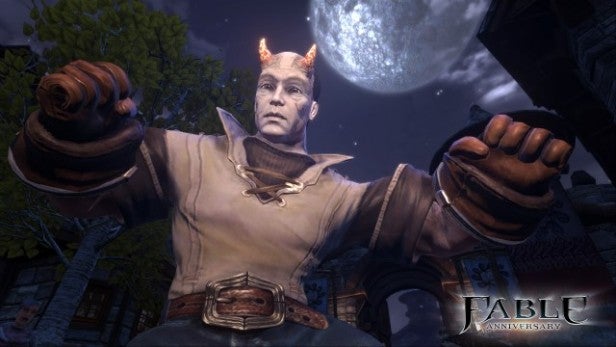 In short, it was fun ten years ago and it’s still fun now, but Fable Anniversary has another problem. We’ve already got a great Fable on the Xbox 360 – Fable 2 – and it makes Fable Anniversary feel oddly superfluous. Fable 2 took all the good stuff out of Fable and repackaged it with better HD graphics, improved gameplay, deeper interactions and more interesting character customisations. It also threw in the dog; one of the best in-game companions we’ve ever seen. Microsoft is charging £25 to £30 for this Fable remake, but you can easily pick up the better Fable for under a tenner. Fable 3, while inferior, is no more expensive, and you can grab the similar (and hugely underappreciated) Kingdoms of Amalur: The Reckoning for just a little bit more.

Fable Anniversary can still be enjoyed as a historical exercise, as a nostalgia trip for hardcore Fable fans or even as a fun, light-hearted RPG. But as a game for modern gamers? It’s decent enough, but it leaves you feeling that the original Fable was far from a timeless classic, but a flawed gem that could still have done with a little work today.

Verdict
With enhanced graphics, a clearer interface and better controls Fable is still a charming and entertaining action-RPG, but its ‘build your own hero’ schtick is no longer anything new, and the rest of the game hasn’t weathered all that well. It’s a worthy burst of nostalgia for Fable fans, but if you want the best Fable on the Xbox 360, save yourself some cash and plump for Fable 2.