The odd thing about Kingdoms of Amalur: The Reckoning is that it’s not a fantastic game for the reasons you would expect it to be a fantastic game. Its executive designer is Ken Rolston, a veritable legend in RPGs thanks to his work on The Elder Scrolls III: Morrowing and The Elder Scrolls: Oblivion. and on the tabletop RPGs Runequest and Paranoia before them. Spawn creator Todd McFarlane worked on the game’s visual design, while fantasy author R.A. Salvatore helped design the world and the back story. It’s been developed by Big Huge Games, the company behind the excellent Rise of Nations and the widely under-rated Rise of Legends. In short, there was every reason to hope for an epic, old-school RPG with a unique world, its own look and its own distinctive take on fantasy. 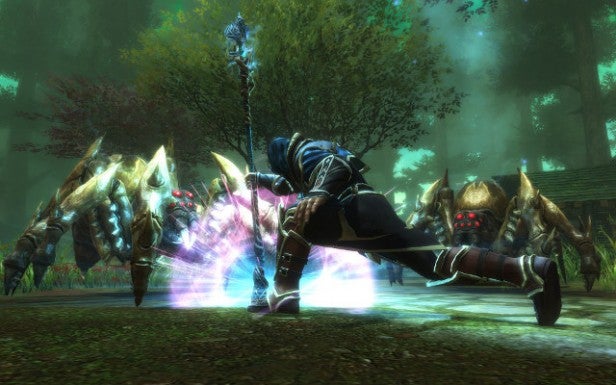 Instead, we have a game that looks like a collision of styles between Fable II and World of Warcraft; very pretty, very colourful and actually quite charming, but hardly the kind of thing that breaks new ground. The world isn’t quite your traditional realm of Tolkien-esque fantasy. With its warring clans of ‘fae’, its faeire balladeers and kobolds, it’s closer in feel to the fifties/sixties fantasies of Jack Vance or Poul Anderson. Yet it’s still not leagues away from what we’ve seen before in Baldur’s Gate, Neverwinter Nights or World of Warcraft. It’s a world that’s been made with a lighter touch and a lighter heart than those of Skyrim, Dark Souls, Dragon Age or The Witcher II, but it’s not necessarily one that you feel particularly compelled to explore. There’s a lot of lore that you’ll be tempted to skip through, and some of the accents on offer defy belief. 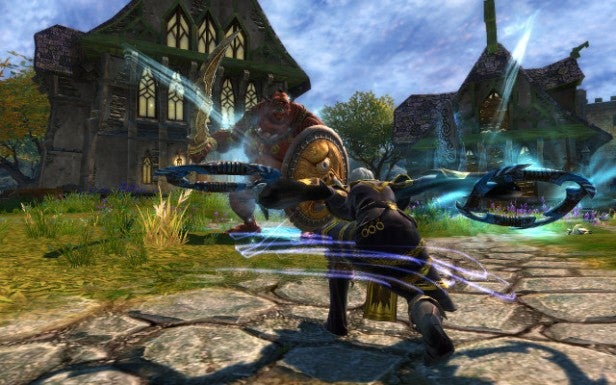 Nor is The Reckoning an immediate stunner. Sure, it looks good in a slightly cartoon way, and all the furniture of the fantasy RPG – the management of arms and armour, maps and instant travel, conversation trees and quest tracking – is all handled with grace and a little design nous. It’s fun to create a character and explore the game’s kingdoms, taking and completing quests and following the story, and there are moments where the landscapes, colours and lighting have a real translucent beauty. After Skyrim’s bugs, the worst thing you can say about this one is that the loading times are a bit slow. Yet Kingdoms of Amalur: The Reckoning could have so easily been a quirky but slightly mediocre RPG of the kind that genre fans shuffle through disinterestedly while they wait for the next big thing from Bioware or Bethesda. 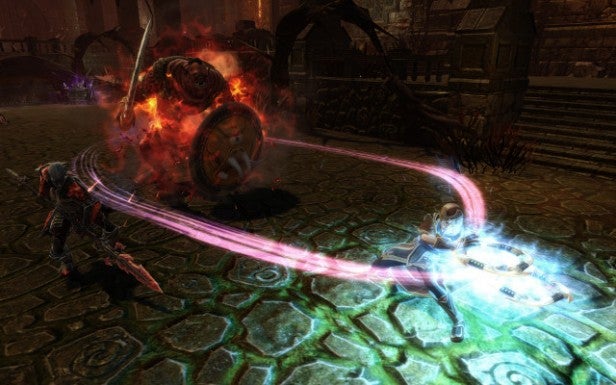 Luckily, it’s a much better game than that, and it all comes down to what’s really important: gameplay. Basically, The Reckoning scores big on three counts: combat, character development and content.

Combat is the most obvious. Rather than taking its cues from Oblivion, The Witcher or Dragon Age, The Reckoning has adopted the kind of fighting you might find in a God of War or Devil May Cry-style brawler. One button attacks with your primary weapon while another does so with your secondary. A third button blocks while another dodges, and with a press of the trigger you can cast offensive and defensive magic. Holding down a button charges up a special attack, and there are honest-to-goodness combos you can pull out with careful timing. Finally, fill a gauge and hold both triggers, and you enter ‘the reckoning’ itself, a monochrome, slow-motion mode in which you can string together multiple kills before finishing off one foe with an experience-boosting fatality. 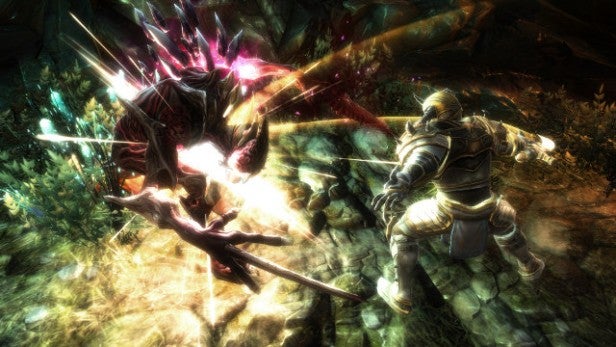 It’s a brilliant system, and so much more immediate and visceral than the combat in most rival RPGs. The weapons, spells and armour available allow you to try a range of different fighting styles, and as your character levels up or gains new weapons, so your attacks and abilities just get better. Large mobs of enemies or enemies with different attack patterns provide a constantly changing challenge, and in many respects The Reckoning hits the same buttons as a good blood-and-thunder action title. It’s an RPG that anyone except the most po-faced, traditionalist RPG fan can get into. 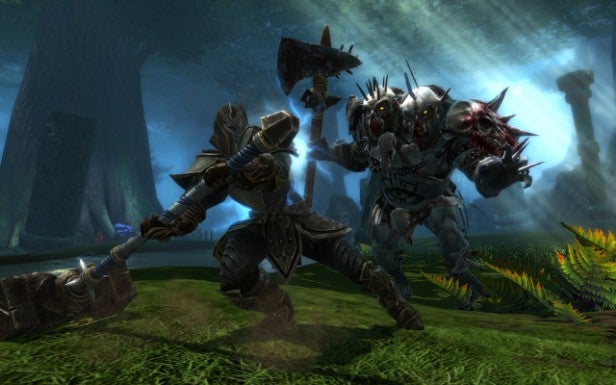 Meanwhile the character development puts the emphasis on flexibility and freedom. As you level you’re free to assign skill points to whichever skills you wish, enabling you to choose the damage bonuses or perks you want to, and while there is a sort-of class system operating, it’s not one that ties you down. In fact, you can simply ditch your previous decisions and reconfigure your hero with relative ease. It also helps that the game is extremely generous. You level up and develop impressive combat skills at a decent pace, and the monsters and treasure chests throw out tasty loot like there’s no tomorrow. While other games keep you waiting for that burning sword of holy flame, The Reckoning has you spending time trying to work out which ensorceled blade or bludgeon will fit your play style best. It seems like every ten minutes there’s a new item that might just be worth adding to your load-out. 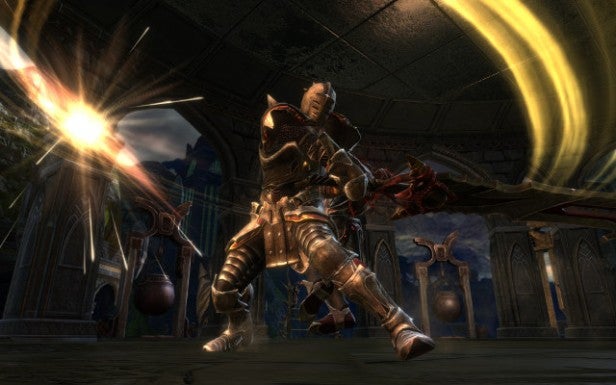 But what makes all this work is that the game comes so packed with content. The landscapes and dungeons are too carved up with pathways and – frankly – silly obstacles for The Reckoning to give you the freedom of a Skyrim or Fallout, but there are so many quests and side-quests to go on, factions to join and minor challenges to complete at any one time that you’re faced with an almost bewildering choice. It’s the RPG equivalent of a Vegas-style all-you-can-eat banquet. The quests are clichéd, but they’re presented well and with a nice line in light humour, and old RPG staples like crafting and trading are there if you want to partake in them. And if the main story doesn’t pack in the surprises or drama of a Bioware classic, it’s good enough to pull you steadily through the game. It’s the sort of game where you start off looking for faults and finding them, but end up hooked. When it all comes down to it, Kingdoms of Amalur: The Reckoning is just great fun to play.

Verdict
Kingdoms of Amalur doesn’t have what it takes to be the next Skyrim, but it’s a warmly welcoming and lovable adventure with excellent combat, superb character development and the focus on what most players like best about fantasy RPGs. It’s not the kind of game that redefines a genre, but it’s a very easy game to play, enjoy and love.