Hot on the heels of LG’s brilliant 3D TV, the 65UB980V, we now have an affordable projector showing exactly how good 3D can look when it’s done right.

The star attraction of the TW6600W’s 3D pictures is their almost complete freedom from crosstalk ghosting noise. We’ve seen some good efforts from DLP projectors in this respect previously, but the TW6600W marks the first time we’ve really struggled to see any tell-tale double ghosting issues on an LCD/LCOS/SXRD/D-ILA projector.

Given how disruptive to 3D’s immersive qualities crosstalk can be, especially at the sort of image sizes you get with bright projectors such as the TW6600W, there’s no overstating just how great it is to witness crosstalk-free images on this Epson. 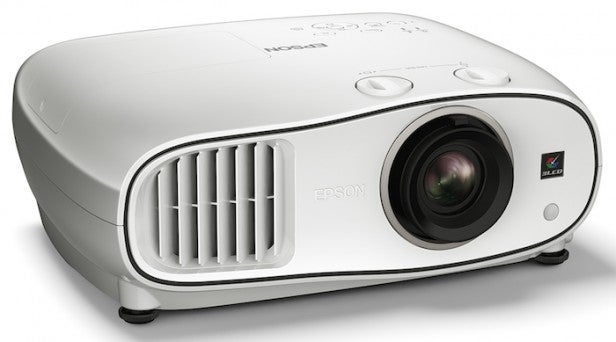 Not having crosstalk to worry about makes it wonderfully easy to appreciate the intense sharpness and detailing in the TW6600W’s 3D images, as well as the seemingly effortless way it’s able to render huge depths of field.

Colours are bold but still impeccably natural, and the slight dimming effect of the active glasses does a pretty handy job of hiding the black level shortcomings noted with 2D.

The only issue we had with 3D on the Epson, really, is that there’s a touch more judder in the image. But it’s seldom severe enough to be distracting.

The TW6600W gives a pretty good account of itself sonically, by projector standards. You can appreciate the clarity and large soundstage the stereo speaker configuration makes possible, and there’s enough power to deliver decent volumes without distortion or harshness setting in.

There’s hardly any bass to speak of, though, and the soundstage doesn’t really expand and then fall back again as films transition between action scenes and quieter moments.

Also, the fact that we positioned the TW6600W behind our seating position, enduring its pictures being in front of us while the sound came from behind, reminded us of the fundamental dislocation issue with built-in projector audio. But if you had the TW6600W positioned in front of you, it could certainly keep a film – and especially a sporting event – more convincing company than the vast majority of projector sound systems.

The Epson TW6100/TW6100W projectors suffered badly with a loud clicking and grinding noise from the dynamic iris system. Happily this rampant distraction has been greatly subdued with the TW6600W.

Now the most you can hear is a gentle clicking that can sound a little like a Geiger counter when it’s working hard, but which is quiet enough not to be noticed if you’re sat more than 2-3 metres from the projector, or if what you’re watching has plenty of volume.

The remote supplied with the TW6600W is a good one. It shuns the ill-judged trend towards smallness exhibited by a number of other projector manufacturers, providing plenty of space for key buttons. There’s also a bright backlight to help you find the buttons in the sort of dark room you’ll usually be using a projector in.

Another bit of great news is that we measured the TW6600W’s input lag – the time it takes it to produce images having received image data at its inputs – at just 34ms. This is low enough not to have a significant impact on a typical gamer’s skills, and we’re pleased to report that the lag figure measured the same using the Wireless HDMI system as it did using a cabled connection.

There are certainly reasons to think about a TW6600W. Its Wireless HDMI connectivity works superbly and instantly solves the often tricky connection problems many projector users find themselves faced with. Most aspects of its pictures are excellent, too – especially their clarity and motion handling – and it’s bright enough to be used in rooms where it’s hard to remove all ambient light.

Its input lag is also refreshingly low by projector standards, making it a potentially good projector for big-screen gaming, and its 3D is the best we’ve seen on any halfway-affordable projector.

It’s just a pity its rather limited black-level response means it doesn’t reproduce dark scenes nearly as convincingly as bright ones – a potentially quite upsetting flaw for the sort of serious movie fan who’ll be up for spending £1700 on a projector.

Class-leading 3D playback and a brilliantly implemented Wireless HDMI connection system aren’t quite enough to blind us to the TW6600W’s dark-scene difficulties.