The EB-U04 is an LCD projector with a Full HD resolution that’s on sale for the budget price of £548.99. Epson pitches it as a projector that can be used for either home entertainment or office presentations.

While it isn’t outright ugly, chiefly thanks to its glossy white top cover, the EB-U04 looks a bit utilitarian versus the more living room-friendly Epson EH-TW5300 that I tested recently. It’s smaller and squat, with a noticeably more compact lens – none of which raises great hopes about its picture quality versus the EH-TW5300. 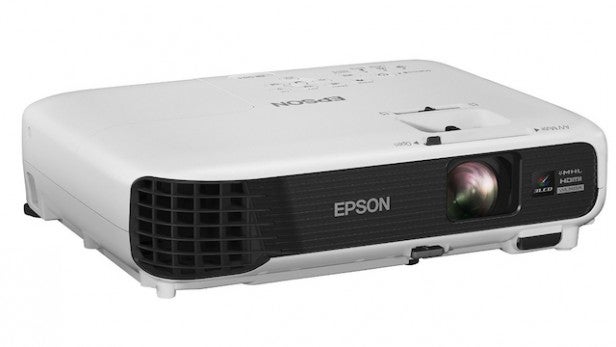 Its relatively petite size does make it handily portable, though – and this useful trait is enhanced by the inclusion of a padded carry bag with the projector.

Connectivity is pretty good. Two HDMIs back up its home-entertainment claims, while its potential as a workhorse is enhanced by a USB port capable of playing multimedia files, a VGA PC input, and the ability of one of the HDMIs to handle MHL mobile phone playback.

You can even add an optional wireless adapter (the ELPAP10), which opens up the potential for using Epson’s iProjection app to stream a range of content – including photos, videos and documents – directly from your mobile phone or tablet through the projector.

The projector’s key picture specifications include a native Full HD resolution, a claimed dynamic contrast ratio of 15,000:1, and a very high maximum brightness of 3,000 lumens. On paper, this combination of brightness and contrast seems weighted towards the business market rather than home-cinema, but it’s entirely possible that the EB-U04 will have the controls necessary to adapt its optics to suit both movie and PC content.

For those looking for a projector for home use, there’s one other point of concern. For while I described the projector as “Full HD”, its resolution is in fact 1,920 x 1,200 rather than 1,920 x 1,080. This means it has a PC-friendly 16:10 native widescreen aspect ratio rather than a video-friendly 16:9 one. 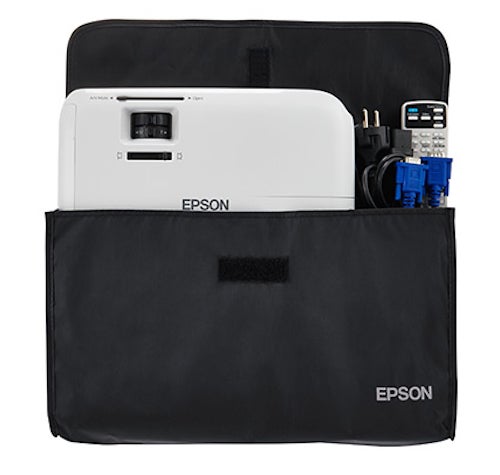 As you’d expect, the projector carries the option to show 16:9 widescreen sources in their native ratio; you don’t have to see them stretched vertically to fill the EB-U04’s full resolution. But there’s no getting round the fact that 16:10 image clips are designed for PC rather than video use.

With the EB-U04 potentially getting used at work and home, it’s good to find Epson claiming a huge lamp and filter life of 10,000 hours – roughly enough to deliver one movie a day for 15 years!

Note, though, that to achieve this life span you’ll need to keep the projector running in its reduced brightness Eco mode. This may not necessarily be possible if your office or home environment has much ambient light.

On a positive, I should remind that this LCD projector won’t suffer with the rainbow striping problem common with rival DLP technology. In addition, it should also deliver more bright images more consistently because, unlike DLP technology, LCD projectors don’t use a colour wheel to produce.

On the flip side, the EB-U04’s LCD technology will lead to a reduction in image quality over the projector’s life than you’re likely to see with a DLP model.

The EB-U04 has a reasonable number of setup options. Physically,  here’s a small amount of optical zoom, a drop-down leg under the front edge of the unit and screw-down legs at each rear corner. There’s also a rather nifty sliding keystone-correction knob above the lens, which helps to get the sides of the image straight if you’re having to position it off to the side. 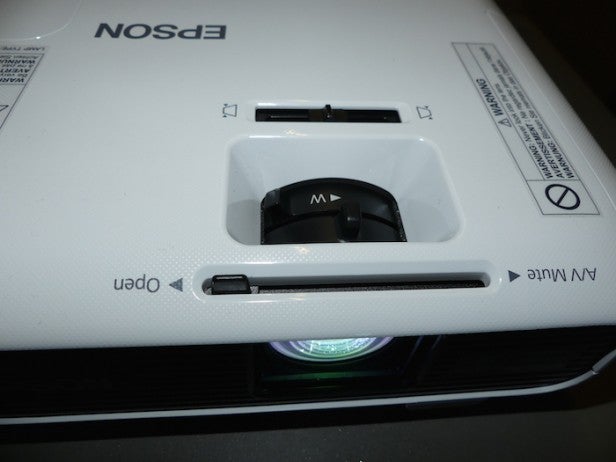 The lack of optical vertical image shift shouldn’t be a surprise at this price point.

The EB-U04’s potential work and play nature is reflected in its picture presets, which include both a Cinema mode and a Presentations mode. Other adjustments include a noise-reduction system (best left off when watching HD); offset and gain adjustments for the RGB colour elements; Normal and Eco modes for the lamp; and the option to set an auto iris system to off, Normal, or High Speed.

My advise would be to ensure you pick the right option – Presentations or Cinema preset – for what you’re about to use it for. Also, when watching a movie in a reasonably dark room, the lamp should be set to Eco to get a little more black-level response out of the optics and drastically reduce the projector’s running noise.

I’d also recommend setting the auto iris option to Normal rather than High Speed, since while this can result in occasional lag in how the brightness responds to changes in the image content, it also causes the iris system to fewer scratching noises. More on this later.