Exclusive to PlayStation 4
With this year’s E3 it’s getting hard to find games that will be released this year, let alone this very day, but that’s exactly what Sony pulled off with Entwined. Its striking psychedelic beauty and emotive music  entranced those who saw it at Sony’s media briefing, and it will likely have much the same effect when you play it at home. The only question is whether it’s as striking a game to play as it is to watch.

Here things get tricky. The simplest answer is that your mileage will vary. Some will find Entwined a powerful, immersive experience that embraces deep themes and does them justice. Others will find Entwined a flawed, frustrating experience that shoots for the goals of high art, but has all the philosophical depth of a Purple Ronnie greetings card. Some will be knocked out by its abstract storytelling, while others will brand it pseudo-intellectual guff. We suspect you will get out what you put in.

On face value, the story and the gameplay – themselves inextricably entwined – are fairly simple. A bird and a fish, presumably two souls, travel through nine lifetimes. Each lifetime is a sort of psychedelic tunnel, rich in colour, light and expressive patterns. The bird and fish can each move around one half of the screen within the bounds of the tunnel, controlled by one analogue stick apiece. You’re advised to hold each stick at the respective left or right-hand limit, as this makes it easier to pull off the rapid shifts and sweeping moves you’ll need to accomplish on each journey. 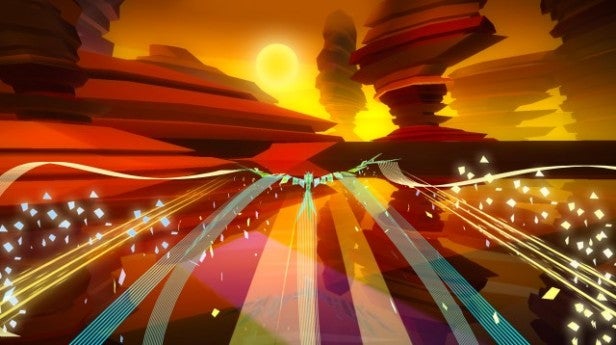 As you zoom forward at a constant speed, you need to do two things. Firstly, you need to collect little colour-coded blobs of energy (we think of a loving or positive emotional nature). These blobs fill up a meter for each soul, and when both fill up you can trigger a connection, which makes the souls move faster, and they come closer together.

When the meters finally join you’re rushed off in a united dragon form to a rhapsodic climactic scene, which might take place amongst canyons, fjords or a stylised funfair. Here you can collect more blobs of energy (these might be memories), and eventually skywrite ribbons of light around, before zooming off into a light in the sky.

To get there, though, you’ll need to manoeuvre both souls through a series of multi-part gates (at least that’s what we’re going to call them). Most of the time you need to get the fish through the orange gates and the bird through the blue ones, but there are also green gates in your way. Luckily, move the two souls together at the top or bottom of the screen and they both glow green, allowing them to speed on through. Get through the gates and you keep the energy blobs you’ve just picked up. Fail to, and you’ll lose them. 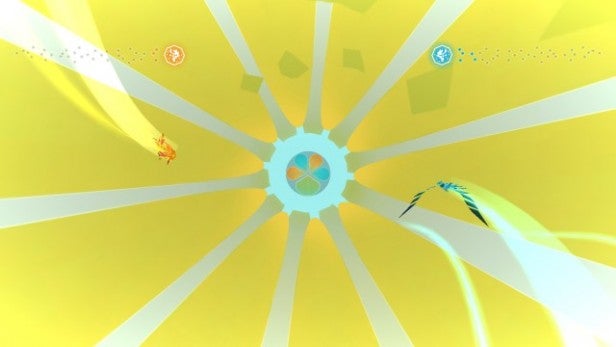 Entwined, then, is really two things. On the one hand it’s an experience of synaesthesia, where light, sound, touch (if you enable rumble feedback) and the flow of gameplay come together to create something extraordinary. On the other hand, it’s a test of coordination. Can you keep both souls picking up energy and moving through the gates at once, or are you destined to never reach your target?

With each lifetime the gates become more numerous, more mobile and more complex in their patterns, requiring a higher level of mastery of the twin stick controls. This isn’t a game of rich mechanics or big surprises. What you do in your first lifetime is pretty much what you’ll do in your last. Perhaps that’s part of the point.

Either way, it doesn’t really matter. When it all comes together, Entwined is an astonishing experience. Play it on a big TV, turn the surround sound up or whack some headphones on, and the cumulative effect of all that light, colour, music, sound and movement is pretty overwhelming. In this respect, it’s up there with other synaesthetic gaming classics like Rez, Wipeout Fusion/Wipeout HD in Zone mode, Lumines or Child of Eden. Yet it’s also oddly frustrating, and doesn’t quite have the same sense of ‘flow’. 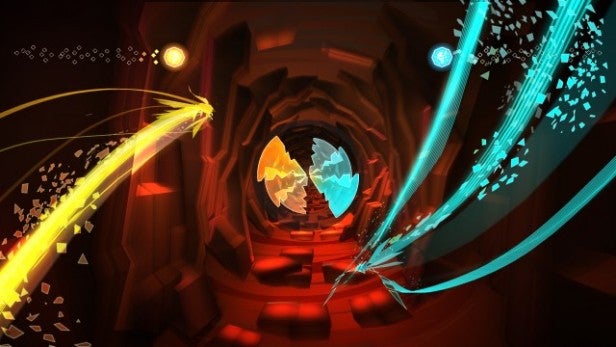 Partly, it’s an issue of speed and perspective. You can’t complete the later levels without mastering the different gate patterns, and against some patterns or colours it’s almost impossible to discern one pattern from another until you’re right up on it. Entwined’s bigger problem, though, is that it’s simultaneously too forgiving on one level while being too unforgiving on another.

You see, it doesn’t want you to fail, so you want lose all your energy and get dropped out of the current lifetime. You basically keep at it until you succeed, or until you get really sick of trying (not everyone has the gift of perseverance). However, you only have to miss one gate in a sequence to lose your energy, or to weaken the connection if your bird and fish are linked. For that elusive ‘flow,’ games either need the actions required to be so intuitive that you can do them without thinking, or possible to learn so that, eventually, muscle memory takes over. We’re not sure either applies in Entwined’s case.

As we said, your mileage will vary. We’ve had a few people playing Entwined, and while everyone loves the style, some find coordinating both bird and fish just impossible, particularly through the more complex gates in later lifetimes. Others can’t see what all the fuss is about, and manage it almost effortlessly. It’s like playing the piano or rubbing your stomach while patting your head. Some can do it, while some struggle. 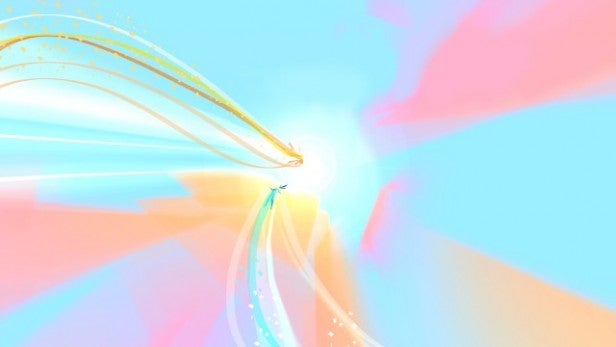 A more universal fault is that the game itself pauses suddenly and momentarily every time your two protagonists disconnect and occasionally at other times as well. Again this breaks the flow and pulls you out of the experience, and seems crazy on a machine as powerful as the PS4.

Keep pushing through Entwined, and you’ll either have it cracked within a couple of hours, or you might just never reach the end. It isn’t a vast game, but there’s a level of replay value in just going back through the levels and seeing if you can handle them better second time around. More importantly, there’s a separate Challenge mode, where you can work your way through five themed levels, each one unlocking when you reach a threshold score in the one before.

It’s not called Challenge mode for nothing. The thresholds are set quite high, and missing one gate in a sequence will lose you a life. You only have three and they don’t recharge. As a result,you’ll either find Challenge a hugely satisfying test of your awesome skills, or even more frustrating than the main campaign.

Critics always like to talk about games which can stand as works of art, even when the games themselves don’t always merit that description. Entwined does. It’s beautiful to look at and just as beautiful to listen to. It’s been carefully designed in every way possible, and it clearly has something to say.

You might find that ‘something’ a profound meditation on the nature of love – though there are other meanings – or you might find its narrative unengaging and its ending an anti-climax. Yet there is at least something there, and also something deeply impressive about the way the ideas and the gameplay mesh together. Does Entwined reach the emotional heights of other arthouse favourites like Ico, Fez or Journey? Probably not. But at least it’s shooting for it, and with some people it might just hit the mark.

Verdict
Entwined is a beautiful game with stunning visuals and some lovely music. It has the guts to embrace big themes and some will find it a surprisingly emotional experience. All the same, it doesn’t quite have the perfect flow of the synaesthasia games that came before it, and it can be hugely frustrating in its later levels, particularly if you struggle with synchronising two activities at once. Still, at the price it’s well worth trying, whether you end up loving it or not.