What is the Dyson Hard?

If you thought Dyson had run out of ways to apply its vacuuming expertise, you’re sadly mistaken. The Dyson Hard is the proof and it’s Dyson’s attempt to re-invent the humble mop. The Dyson Hard is a mop and vacuum combination cleaner with a flat, removable wipe-based mop head sandwiched between a pair of narrow vacuum channels. Thanks to a single-handed trigger-based design it is easily portable, with a design similar to the recent Dyson DC59 vacuum. It’s set to cost £249, with each additional pack of 12 antiseptic wipes a further £4.99, so the Dyson Hard is not cheap, but does it make mopping any easier? We given it a preliminary test run ahead of a full review to find out. 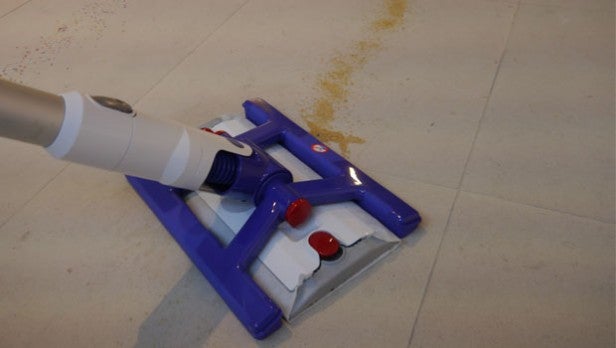 The Dyson Hard looks confusing. Like the company’s cordless vacuums, the Hard sees a battery-powered vacuum cleaner extended by a ridged, metre long suction tube. Now, however, a boxy mop head has been plonked on the other end, instead of a standard vacuum cleaner component.

While the multipurpose cleaning head is an all new creation, the body of the Dyson Hard is a familiar beast, identical in appearance (and power) with the Dyson DC44, just in a new, white colour scheme.

During early tests, the plastic mop head felt sturdy and solid during use despite its less than robust looks. It withstood high amounts of pressure, putting our full weight into the cleaner in order to remove dried vinegar stains from a solid floor. Quick release buttons on the mop head let you change cleaning wipes quickly and with minimal fuss.

Although designed for use primarily on hard floors, the Dyson Hard does come bundled with an additional crevice tool. As well as offering better access to corners, this allows the Dyson Hard to be used on high, hard to reach areas, or down the back of the sofa. While we would have liked to have seen more standard vacuum add-ons bundled, this addition does make the Hard an even more multi-purpose device.

Like the Dyson DC59, which we recently reviewed, the Hard will come packaged with a wall mountable charging dock. As well as offering simple recharges, the dock also solves storage issues for the slightly awkwardly shaped cleaner. 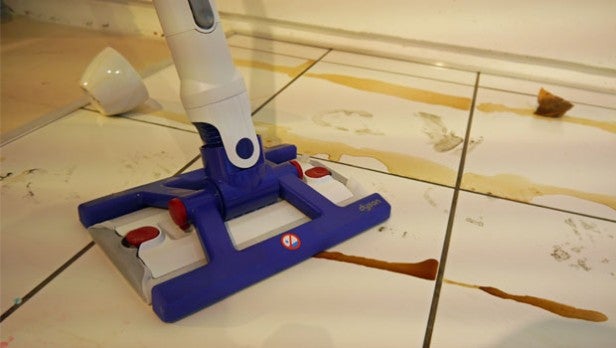 During our hands-on time with the cleaner, we put the Dyson Hard through a number of rigorous tests, tackling everything from muddy boot prints and spilt tea and coffee, to scatterings of sugar, oats and even toothpaste that had been rubbed into a tile floor.

In theory the positioning of the two vacuum channels either side of the mop head means that large pieces of dirt are sucked up before the antibacterial wipe address any stains. The second cleaning channel then gives a final safety sweep to catch any stray grime.

In practice, we weren’t totally convinced. Large stains proved too demanding for single runs with the narrow vacuum channels failing to collect all dirt and dust. What’s more, liquid sucked up by the vacuum elements caused more solid pickup to clump in the cleaning channels, creating a goopy mess. Although this can be easily cleaned with the wipe of a cloth it is hardly ideal. 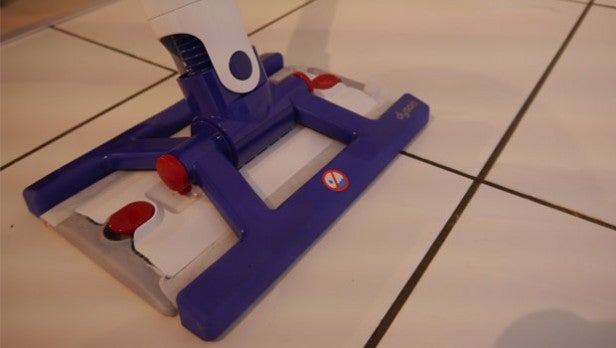 In terms of manoeuvrability, the Dyson Hard ticks all the right boxes. The hinged cleaning head allowed us to quickly and easily switch directions to address stains of all shapes and sizes. Although we pushed the device beyond its natural expectations, for the most part it addressed the cleaning needs of the situations in front of it.

For larger spills and tougher stains, the Dyson Hard will require you to put in some serious work. A considerable amount of elbow grease is needed to tackle the likes of vinegar stains so, on first use alone, we are hesitant to recommend the Hard to elderly users.

Although the Hard features a minimal 0.3 litre dust capacity, this is not really an issue. The Dyson Hard is not designed for large, full home cleans and so this limited capability should not be trouble over a single clean. Similarly, thanks to the trigger mechanism and power friendly Dyson motor, the 15-minute predicted battery life, which drops to eight minutes when using the suction boosting ‘Max’ button on rear, proved more than enough for use to tackle multiple cleans. 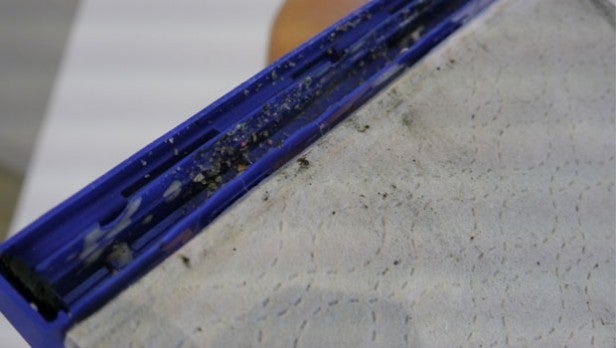 Where we were recently impressed by Dyson DC59 from first use, early impressions of the Dyson Hard are somewhat indifferent. Although offering sparkling hard floors following a number of swipes, the Hard impressed but did not excel in early tests. This is of course based only on our hands-on demo time with the device, a full Dyson Hard review will be available shortly, tackling the vacuum turn mop in full detail.

Next, read our Dyson DC49 review