‘Evolution not revolution’ is a phrase that has become all too familiar in recent years and it would seem to fit the ‘DC44’ perfectly. Both visually and numerically the handheld vacuum appears to be the logical successor to Dyson’s ‘DC35’, so we were rather surprised to hear the company thinks it will change the way we look at vacuuming forever. And it just might…

Design
None of this comes through at first sight. Sit the DC44 before the DC35 and it is quite hard to tell the difference. Aside from a more matched colour scheme the DC44 looks identical to its forebear and has the same dimensions (205 x 115 x 322mm) and weight (1.33Kg). 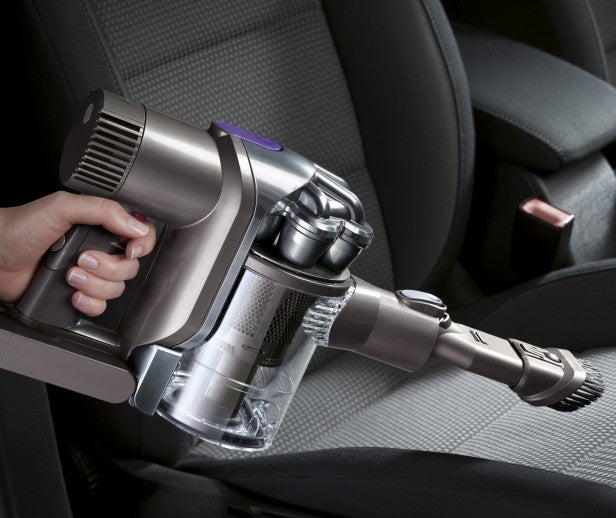 Construction is also the same. It’s made from hardwearing, but primarily plastic materials with a gun-style trigger that’s pressed and released to start/stop operation. The removable battery sits horizontally underneath the trigger and there is a clear plastic bin for dirt which empties unceremoniously by flipping open at the bottom when the vertically mounted red release catch is pushed – careful you aim it the right way as it opens towards you!

Meanwhile the bulbous head of the DC44 hides Dyson’s patented ‘cyclone technology‘ which uses centrifugal forces to spin dirt around the sides of the bin as it is collected to avoid it clogging up the filters and reducing suction. Behind the cyclones is the motor (more of which below) and at the front is the nozzle where appropriate accessories can, with consummate ease, be snapped in to tackle different cleaning tasks.

What differentiates the DC35 and DC44 from the DC34/DC34 Animal (yes, Dyson hasn’t made this easy) is the inclusion of the long motorised brush attachment and a proper wall-mountable charging dock, additions which explain the hefty step up in price.

The wall mount allows the DC44 and the large hose to hang out of harms way to save space, and it also holds up to two nozzle accessories (a strange point, being as three are included). Unfortunately the dock is a somewhat underwhelming moulded plastic unit that feels cheap and makes a rather disconcerting cracking sound each time the DC44 is taken out – a method which is no more sophisticated than giving it a good yank. While we’re sure it has passed Dyson’s famously rigorous stress tests, it feels like the first thing that would go in any warranty claim.

Features
All of which leaves us feeling a little non-plussed, but the revolution comes not from the outward design. What excites us are the breakthroughs Dyson has made with the DC44’s performance. The motor still spins at a mind boggling 104,000RPM (and maintains two power modes: standard and max), but Dyson claims it now delivers twice the power at the cleaner head to drive bristles deeper into the carpet with more force.

The second part of this one-two punch is the increased battery life over the DC35 which gets a 25 per cent bump from 15 to 20 minutes on standard power and from six to eight minutes for the max mode. This change comes from swapping the Lithium-ion battery for nickel manganese and altering its chemical composition to create a higher discharge rate. The result is a battery akin to those used in Tesla electric sports cars.

Ultimately why this combination of more power and greater battery life excites Dyson is because it believes they push it through the threshold where it breaks the divide between handheld and traditional vacuums. It claims whereas previous models were essentially handheld vacuums with the bonus of being able to add an attachment to have a go at carpets, the DC44 is a serious do-it-all machine which can replace both full size and handheld machines. As such hopes are high that it can redefine how people picture the home vacuum.

Performance
So can your existing vacuum be thrown away? Yes, with caveats. What Dyson hasn’t exaggerated is the power of the DC44. It doesn’t truly rival a full-size mains-powered machine but, just as with cordless drills compared to mains drills, it does the job for the vast majority of tasks, with only the most engrained dirt or heavy detritus proving troublesome.

Dyson supplies the DC44 with four heads – an 8in narrow one for crevices, a wider brush tip for uneven surfaces, a mini motorised brush bar for agitating carpets or upholstered furniture (perfect for cars) and a long reach ‘wand’ with motorised head for general vacuuming – and with each it performs brilliantly. 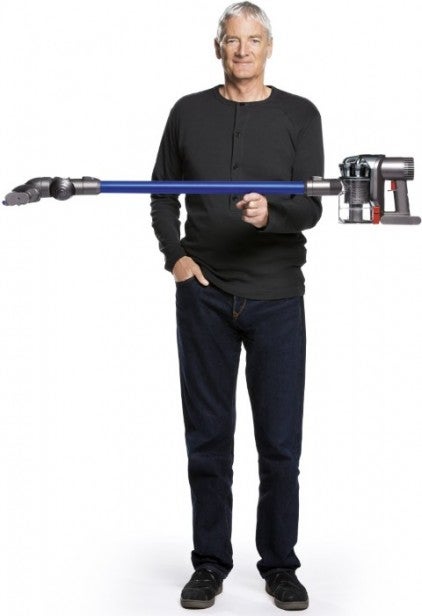 The most noticeable success is as a replacement full-size vacuum. With the long wand and ball-fitted motorised head attached the DC44 feels very well balanced and is far lighter and more agile than a full size machine. Suction is plenty strong enough for most carpet dirt as the brush head does the hard graft of prizing out the stubborn stuff, such as hair.

That 20 minute run time is crucial too as we found it reached this with some to spare (21 minutes 53 seconds) which makes is long enough not to rush. Yes using it on max cuts this time dramatically (we got seven minutes 43 seconds on constant), but we found it was only required now and again in short bursts.

Like one of the best aspects of the DC35, the DC44 is also incredibly low maintenance. Each month the filter should be washed, but it lasts a lifetime and is easily accessed by pressing the ‘Filter’ button on the top of the unit. This effectively splits the DC44 in half exposing the filter. 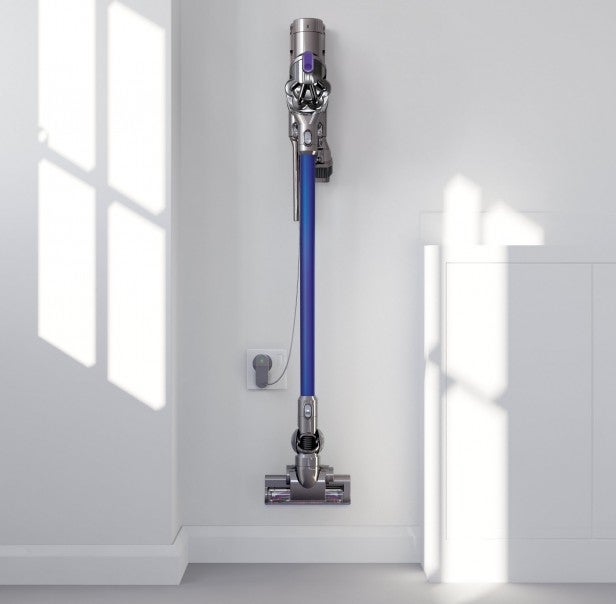 So what are the caveats? In short they are the understandable side effects of a small vacuum doing a big vacuum’s job, and they have not been fixed from the DC35. For example the bin size means it needs to be emptied at least once during every clean and, while perfectly fine for flats, the longer battery life will still be a problem for large houses over multiple floors. Furthermore, given it is most efficient to store the DC44 in its charge dock with the long wand attached, we’re not convinced how much real world space it really saves over something like the highly compact DC24. That charge dock release mechanism also still bugs us – the release sound should be satisfying, not terrifying!

Value
Take a deep breath because the DC44 costs £280. Is this good value? It depends on individual circumstance. The DC35 costs £260 and it is certainly £20 better and if your apartment is small then arguably the role of the DC44 as both a handheld and full size vacuum makes it fairly attractive (in Dyson terms). On the flip side for those with larger houses who will still need a full size machine the DC44 is somewhat superfluous as you might as well just buy the DC34 Animal dedicated handheld (which Dyson will keep on selling) for circa £150. Then again if you have a large house, maybe you can afford both.

Verdict
Dyson is right, the DC44 ”is” a game changer because it does cross the threshold where a handheld can replace a full size vacuum… but only for those with smaller apartments. Key to this is the more powerful brushhead for effective carpet cleaning, and boosted battery life means you don’t need to rush. Meanwhile it is a superb handheld machine for small spills, even if it is a little bulky compared to some handhelds. The flip side is the DC44 can’t take on larger houses and as such you’d be better off saving £130 by buying the DC34 dedicated handheld to go alongside a full size machine. Ultimately though we have to say hats off, Dyson has created a genuine hybrid device. Evolution or revolution? A bit of both.