This is where the 360 Eye truly shines. It’s the first robot vacuum cleaner to use the cyclone technology for which Dyson is famous. And while it uses one of Dyson’s older “digital motors” – the 360 Eye has a V2 motor vs the V8 in Dyson’s top-of-the-range cordless vac – it’s still in an entirely different league to any other robot vacuum cleaners.

My first outing proved as much. I cleaned, I thought, pretty thoroughly before the 360 Eye’s first run, but it still came back full after 45 minutes. On its second outing too. Run regularly, it shouldn’t require emptying quite so often, but it instantly impressed with both its cleaning performance and thoroughness in covering every accessible nook and cranny.

After a few days, I ran a back-to-back test against the Roomba 880 I’ve had for more than a year. The Roomba 880 went out first, cleaning a large double bedroom for around 60 minutes. Once done, I sent the Dyson out into the same room. It came back 20 minutes later with even more dust in its bin than the Roomba in a fraction of the time.

Side-by-side tests conclusively prove the difference, too. Even on multiple passes, my Roomba 880 struggles to capture what the Dyson does in a single pass. 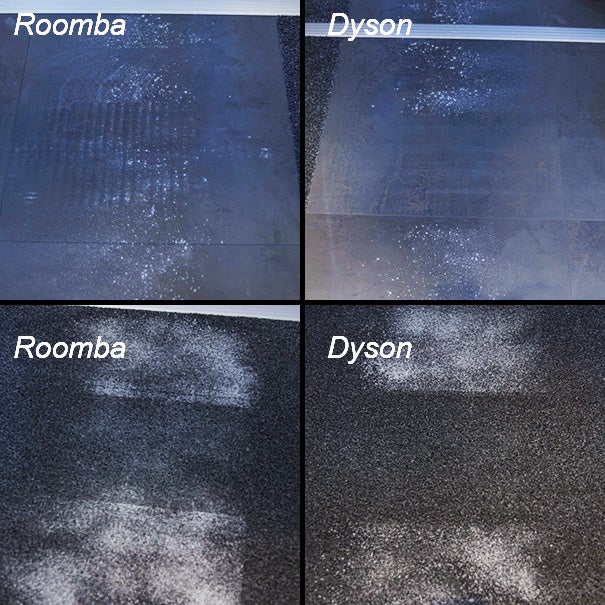 Not only does the Dyson trounce its rival when collecting fine dust and particles, it’s better with heavier debris too – especially on hard floors. Here, the Roomba’s spinning brush fires debris all around the room, which only makes the problem larger. The Dyson just sucks it up and moves on.

The superior cleaning is largely down to the outstanding suction power of the 360 Eye, but its methodical navigation can’t be discounted. While its 45-minute run-time is relatively short, the Dyson uses it efficiently. It spends little time going over the same areas and it’s powerful enough to not need to.

I found one full charge was enough to cover a large living room, a small corridor and a decent-sized double bedroom – around 35m2 according to the Dyson Link app.

When cleaning, the Dyson will go home to charge and come back if there’s more to do; in a whole working day it should cover a decent area. I’d hesitate to make a guess at how much, though, since so much depends on the layout of your home. 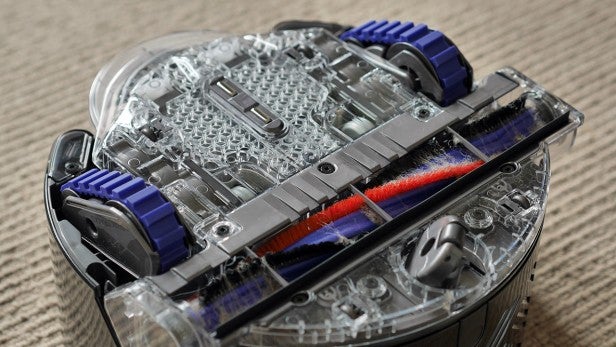 As mentioned earlier, the one chink in the Dyson’s armour – aside from its height – is its approach to skirting boards and borders. Whereas a Roomba will detect a skirting board or border and hug it, the Dyson sticks to its cleaning pattern religiously. More often than not, it will get close to skirting boards – within a centimetre or so – but in my experience it won’t get right up to them.

It’s nothing the occasional whizz around with your regular vacuum won’t solve, but it’s something Dyson’s engineers could work to address.

Another small consideration is the 360 Eye works best in daylight or decent artificial light. Since it relies on a camera to navigate, the Dyson is more sensitive to changes in lighting as it cleans. It has two infrared “headlights” to help combat low-light areas, but it still works best when it can see clearly.

I love the Dyson 360 Eye. It cleans better than any robot vac out there. I can’t stress that enough, really. It’s in a different league.

But it’s impossible to consider the 360 Eye without discussing the price – £800 is a lot to spend on anything. Yet, it’s not a ridiculous price. The Roomba 980, iRobot’s top-of-the-range robot, costs about the same in the UK, while the likes of the Neato Botvac Connected and Roomba 880 cost around £200 less.

All have their pros and cons, but the Dyson 360 Eye is the only one I’d seriously consider buying. It is, without doubt, a luxury. But it delivers – and does so with minimum fuss.

Smart, efficient and powerful – if it were a little shorter, it would be perfect.