Wires are the bane of our lives. Our test room is absolutely awash with them, and even our  various living rooms aren’t nearly as ‘cable tidy’ as they should be. Especially if our long-suffering other halves had their way.

Which is why we – and those other halves we mentioned – are pretty pumped today to be checking out the DVDO Air: a brilliantly simple Wi-Fi video system with the potential to make cables a thing of the past. Well, kind of.

Getting connected
The £350 DVDO Air package chiefly comprises a transmitter unit you attach via a supplied HDMI cable to your HD source, and a receiver unit you attach via another supplied HDMI cable to your display. Both the receiver and transmitter units are powered, so between the plug cables and the HDMI cables we guess you can’t call the system completely cable-free. But, of course, the point is that you don’t have to trail a huge cable all the way between your video source and your video playback device – a particularly major issue if you’re using a projection set up.

The DVDO Air’s packaging is at pains to illustrate other scenarios where its wireless functionality could come in massively handy, too. There are photos depicting a “Difficult Installation” featuring a TV hanging on a brick wall; a kitchen scenario showing a little TV perched on a breakfast bar with no cables going into it; and a patio scenario with a TV mounted on an external (though covered) wall. 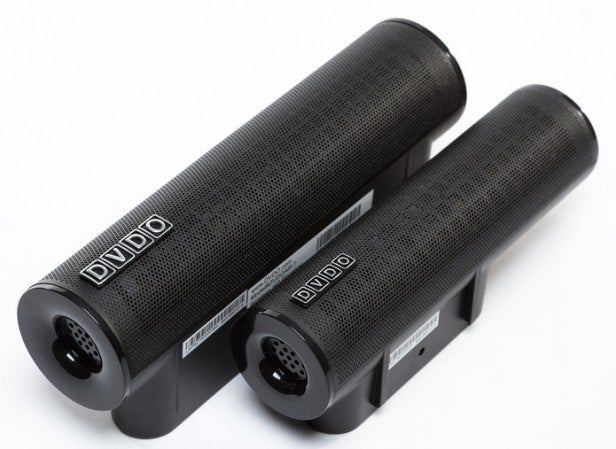 To be honest it’s hard to imagine this latter set up getting much use in the climate-challenged UK. But we certainly know of people who have external projection systems, or who want to be able to use a portable TV outside when the weather permits. In fact, the more you think about it, the more liberating not having to physically connect a source to a screen starts to look.

No loss situation
But surely you’ll have to accept some sort of compromise to your video quality when using the DVDO Air’s transmission system, right? Actually, no. At least in theory. For the DVDO Air uses the Wireless HD standard, which remarkably enables the LOSSLESS, full-rate (4Gbps) wireless transmission of full 1080p HD and even full HD active 3D video.

Obviously a potentially critical element of the DVDO Air system is its effective range. DVDO claims that the system should work over distances in excess of 10m without a direct line of sight, or as far as 30m with a direct line of sight. You also shouldn’t have to worry about any interference from other Wi-Fi gear in your house as the system offers six different channels within its 60GHz operating band.

Pretty easy to use
Many people still identify setting up Wi-Fi systems with brain-bending complications. But in principal, at least, the DVDO Air system really couldn’t be any easier to use. Connect up your source to the transmitter and your screen to the receiver, and that’s it. As soon as you power the two units up they automatically find each other and start transmitting their signals.

We did suffer on a few occasions during our tests with the DVDO transmitter not handshaking properly with our Panasonic Blu-ray player. But this was always easily fixed by powering down the Blu-ray player and then firing it up again.

Both the receiver and transmitter feature single HDMI inputs, scan buttons you can use if you want to switch between multiple receivers, a simple on/off power switch, a power light indicator, plus on the receiver there’s a ‘link light’ – a light that shows you the status of your connection with the transmitter.

Robust signals
To test the robustness of the DVDO Air transmission system, we placed the transmitter and receiver around 7m apart and tried sticking a variety of things – boxes, TVs and even ourselves (humans being the most likely things to suddenly get int he way as they wander around the house) – at varying distances in front of both the transmitter and receiver units. And remarkably the signal remained totally robust at all times, even with objects placed so close to the receiver/transmitter that they were practically touching it.

We even tried wrapping a shirt around the edges of the transmitter at one point, and still the signal suffered not even a flicker of lost synchronisation or content degradation.

This is a genuinely excellent result that says much about the level of electronics that have been squeezed into the transmitter and the slightly smaller receiver.

Both units are built in a cylindrical format (with TV top and wall mount brackets for the receiver helpfully included in the box) which presumably allows them to beam and receive their signals in and from pretty much all directions. That they can do this without suffering any apparent crosstalk between all the signal beams is very laudable indeed, especially when you consider how much data is contained within the streams.

We don’t mind admitting that we were more than a little sceptical about DVDO’s claims that the Air system ships all of its picture and sound with no loss of quality. But we’re happy to say that the Air system quickly set about battering our doubts about the head with an attractive full HD stick.

First impressions were that detail levels in HD 2D and 3D feeds look completely unaffected by the wireless HD system, as do colour saturations and motion reproduction. To be more certain of this gut feeling, we switched between a direct cabled and a wireless HD version of the same few movie sequences more than 30 times, 15 of them in blind testing circumstances, and it remained our opinion throughout that nothing is lost from the image in the wireless transformation process.

Sparkly addition
That said, we were sometimes able to spot when we watching the wireless image rather than the cabled one due to something that was sporadically added to the picture: namely low-level white ‘sparklies’ – dots of white that pop up like little quarks every now and then.

The good news is these white dots didn’t occur all the time during our tests (annoyingly we couldn’t actually figure out a pattern to their appearance, other than that they mostly occurred when using our Panasonic Blu-ray player), and are only a tiny part of the image even when they do appear. We suspect they were caused by some momentary electrostatic interference of some sort, but as we said, we couldn’t detect a consistent cause. 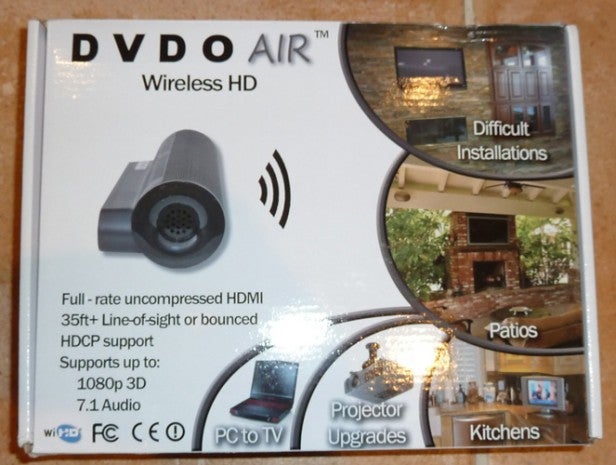 With the DVDO Air handling video so well, it’s no surprise to find it also working superbly with the less demanding audio aspect of its delivery system. We couldn’t detect any difference at all between 7.1-channel 192kHz feeds sent through the DVDO Air and those sent through a standard HDMI cable.

One final test we ran on the DVDO system was its level of latency – a potentially significant issue for gamers. And we’re pleased to report that we measured less than 10ms, which can be considered a negligible amount in gaming terms. Excellent.

Rather less excellent, though, was the way that the generally ultra-stable connection occasionally (about 15 times during our two days of testing) dropped for as much as 10 seconds at a time while playing on our Xbox (set to 1080p/60) while using our Epson TW5500 projector. The sudden blank screens caused by these drop outs clearly don’t help if you’re in the middle of a game of Call of Duty online. However, we did not suffer the same drops at all while using any of our various TV displays instead of the projector. Odd – but hopefully symptomatic of a very isolated phenomenon.

The Epson factor
Before we wrap up, we should briefly cover the elephant in the room. Namely that an extremely similar wireless HD system is available with a couple of Epson’s current 3D projectors (the TW9000W and the TW6000W). These Epson systems actually use chipsets licensed from DVDO, but they are more limited in their scope. For starters, they don’t use an external receiver, which means they’re less flexible when it comes to installation options.

The system used by Epson also doesn’t support HDMI’s Audio Return Channel functionality while the DVDO does, and the DVDO system additionally supports special CEC functions that identify the input as DVDO Air as well as passing back CEC commands to the source. These latter two functions could certainly be useful in certain home installation situations.

Verdict
Although it’s maybe £50 dearer than we’d like and suffers the occasional HDMI handshake and video sparkly issue, the DVDO Air is pretty much a dream come true for anyone who’s experienced cabling nightmares while trying to set up an AV system or even been completely put off an ambitious AV project simply because of the hassle of getting everything connected. A great idea done well.