It appears that 3D is no longer a premium AV feature. It already commands only a relatively minor price hike in the TV world, and products like the Epson EH-TW6000W show that it’s fast becoming pretty standard fare on projectors too. For despite sporting active 3D playback, driven by a crosstalk-reducing 480Hz system, and shipping with one free pair of active shutter glasses, the TW6000W can be yours for just under £1550.

What’s more, the features just listed are merely the tip of the iceberg. For a start, there’s also the Epson brand name to consider. Epson has forged an excellent reputation for itself in recent years as a maker of seriously able home cinema projectors – a reputation that was only enhanced by Epson’s impressive debut 3D model, the TW9000W, tested a few months back.

The ‘W’ at the end of the TW6000W’s name is interesting too, for it indicates that like the Epson TW9000W, the model we’re testing ships with a Wireless HDMI system. Comprising a slightly bulky transmitter you attach to your source equipment, this system can transport Full HD and even Full HD 3D video – and audio – source signals ‘through the air’ to the projector. This is clearly a much more convenient solution for your average home than trying to run massive cable runs right around your room.

What’s particularly good about the Wireless HDMI system is that it actually works. It delivers a seemingly flawless Full HD picture with no loss of resolution, no obvious signs of compression, and during our three days of testing, not a single mid-film dropped connection – not even for a second.

As with the Epson TW9000W, we did experience a few instances where the projector didn’t always ‘see’ the transmitter on first power up until we’d unplugged it and switched it back on again. But once the two devices were talking, the signal was flawless.

The TW6000W also benefits from an unusually nice design for such an affordable projector. Its glossy white finish (there’s a cheaper, non-wireless HDMI version available in black too, if you prefer) wraps classily around a busy but ultimately appealing shape, with extra aesthetic punch coming from the black finish applied to the projector’s front vents and lens mounting.

The TW6000W goes further than you might expect for a projector at its price level when it comes to providing image calibration tools. There’s a pretty comprehensive colour management system, for starters, that lets you adjust the hue, saturation and brightness of the RGBCMY colour elements, as well as further RGB offset and gain settings. You can also adjust the projector’s gamma level, using any of five presets (including the generally best-for-video 2.2 one) or a customised setting based on manual adjustments to a gamma curve. It’s worth noting, too, that the projector helpfully freezes the image being shown while you’re in the colour adjustment menus. 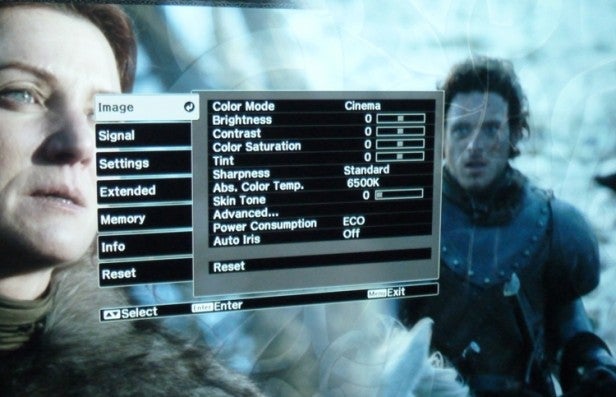 Other potentially useful adjustments in the Epson TW6000W’s menus include a variety of mostly sensibly calibrated picture presets, a skin tone adjustor, Eco and normal power settings for the lamp, and auto-iris options.

Auto iris systems can be useful for maximising image contrast, but in the TW6000W’s case we tended to leave the feature switched off on account of it causing a) some noticeable brightness ‘shifting’ and b) some slightly distracting grating noise from deep inside the projector.

With so many high-level adjustments tucked within its onscreen menus, though, we were rather disappointed to find the Epson TW6000W lacking what we consider one of the most important set up tools for any projector: vertical image shifting. Being able to shift a projector’s image up and down optically is hugely important to many living room set ups, since it prevents people from having to use keystone correction.

Keystone correction, if you’re not familiar with it, manipulates the shape of the image so that its edges appear straight rather than trapezoidal as will otherwise happen if your projector’s image is hitting your screen at an angle. And obviously such image reshaping is hugely problematic from an AV enthusiast’s point of view, since it essentially means the image is no longer being shown with ‘pixel for pixel’ accuracy.

Epson provides two types of keystone adjustment on the TW6000W: a lens-based one achieved via a slider on the projector, and digital keystone contained within the onscreen menus. But our fervent desire to avoid both led to all kinds of tricky shenanigans trying to get the projector positioned in exactly the right place in our test room to produce the right-sized image without having to use keystone correction.

At the risk of labouring the point here, while we could comfortably accept not having keystone on a projector costing £1000 or less, it seems a rather tough omission to take for £1600. Even on a projector that gives you active 3D playback.

Moving on from our keystone obsession, first impressions of the Epson TW6000W’s 2D pictures aren’t especially positive, surprisingly. The main problem is that the projector’s black level response isn’t particularly good, so that dark scenes appear with a quite noticeable blue/grey tinge to them thanks to the projector’s inability to render a really convincing black colour. This is true, moreover, even if you use the Eco lamp setting, the Cinema preset, set auto iris to Normal, and reduce the brightness level. 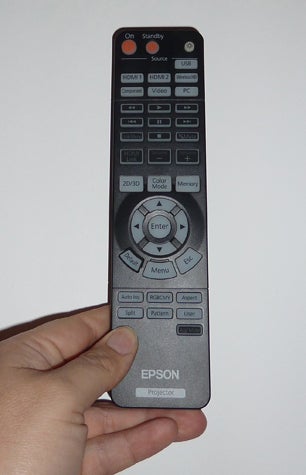 In fact, reducing the brightness quickly results in some pretty serious crushing out of shadow detail, illustrating all too clearly that the TW6000W’s black level issues are fairly fundamental to its optical arrangement rather than being something you can fix through calibration.

This being an Epson projector, the TW6000W’s 2D pictures certainly have some significant strengths, too. First, they look exceptionally sharp and detailed with HD footage, even handling grain in the best Blu-rays with a level of accuracy and naturalism that’s very rare on a sub-£2k projector.

Motion is reproduced exceptionally well by the Epson EH-TW6000W too, looking crisp, detailed and natural, with none of the excessive judder or slightly ‘laggy’ look that can trouble less able LCD projectors. Next, while shadow detail takes a dive if you try and take down the TW6000W’s brightness, at around its initial preset levels the projector actually does a fair-to-middling job of picking out the sort of subtle picture information that helps give dark scenes a sense of depth and scale.

Talking of bright content, the TW6000W’s natural brightness-biased qualities help it deliver the likes of animated films and video games with plenty of punch and vitality. With this in mind, we were pleasantly surprised too by how quietly the TW6000W runs, at least in Eco lamp mode.

It’s when you switch to 3D viewing, though, that the Epson TW6000W really grabs your attention. For right away many of the issues noted with 2D melt away. Colour tones look more realistic as well as being punchier than is the case with many active 3D projectors. Also, black levels look deeper and less ‘blue’ thanks to the natural dimming effect of the shuttering technology in the glasses.

Basically, it’s hard to resist the thought that for – better or worse – the TW6000W has been put together with 3D rather than 2D foremost in its mind.

Underlying its 3D credentials still further is its impressive handling of that active 3D bugbear of crosstalk noise. The image certainly isn’t totally immune to the double ghosting issue, but it appears only rarely, and is relatively subtle even when it does crop up. This can count as a very impressive achievement on a £1600 3D projector that also boasts wireless HDMI functionality.

Motion looks reasonably fluid in 3D mode too, and the projector’s high brightness means that dark backgrounds are reproduced with a fair amount of detail, rather than just looking like sheets of empty blackness as can happen with less punchy 3D projectors. 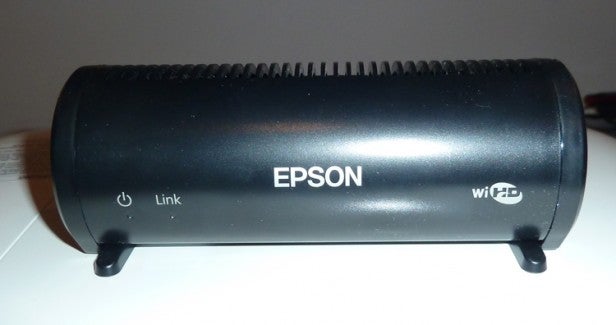 The only problems we have with the Epson TW6000W’s 3D images are that dark scenes still look a bit greyed over, and that HD 3D images look slightly soft, not selling their Full HD nature quite as aggressively as they might.

For what it’s worth, the TW6000W is one of a growing number of ‘casual’ projectors to sport built-in speakers. What’s more, these speakers are actually quite good, producing a clean, well-rounded sound forth that spreads further away from the projector itself than you would expect.

Of course, though, as with all in-projector audio, this doesn’t change for a minute the fact that its sound appears to be coming from a completely different geographical place to the pictures its supposed to be accompanying.

If you’re on the hunt for a very affordable projector that can do a really good job with active 3D, the Epson TW6000W definitely warrants an audition. Just bear in mind that unlike its more expensive TW9000W sibling, the TW6000W is only a solid 2D projector. So if you expect 2D to make up the majority of your viewing time, it might be worth trying to save up a bit more to secure the TW9000W or maybe the Panasonic AT5000E, which both offer stellar 2D performances to go with their good 3D ones.