Only a few months ago the arrival of a 3D projector was a big deal. Now it’s almost commonplace, with the likes of Sim2, Panasonic, Sony, Optoma, Vivitek, and Sharp all whisking 3D projectors to us in recent times.

There has been one key brand conspicuously absent from the 3D projection list, though: Epson. The Japanese brand announced a range of 3D projectors at the IFA show in Berlin in September, and promised they’d hit our shores in November. But in what’s become typical Epson fashion, this deadline came and went, and it was starting to look as if Epson’s 3D models wouldn’t make a 2011 launch at all.

Just as we were about to down tools for the festive season, though, we finally received an Epson TW9000W. So over the Christmas break, while we quaffed and scoffed we set to watching a few movies on this new flagship 3D model.

The first thing to say about the TW9000W is that it’s a really nice looking bit of kit. It boldy blends a textured white finish with black grilles and lens mounting that sit right across its front. Its sculpting is pleasant too, with curves on the corners and a pleasing sense of symmetry thanks to the centrally mounted lens.

It’s also a very large unit for something which, at £2,649.60, sits at the relatively affordable end of the market (though obviously the ballpark has shifted in this respect since the launch of the £1,249 Optoma ThemeScene HD33). This size is actually only to be expected with a ‘serious’ 3D projector, given the need for such projectors to produce more brightness while also keeping a lid on running noise. 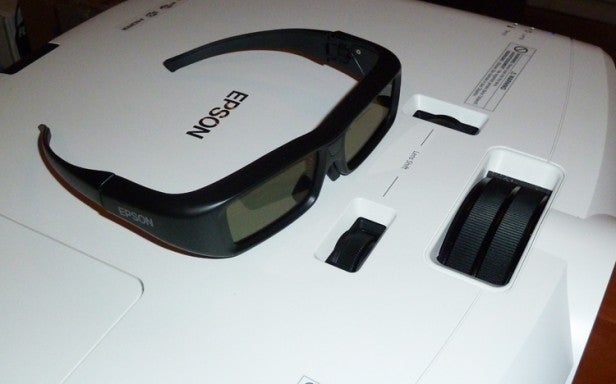 Its striking max brightness figure isn’t the only number game the TW9000W plays unexpectedly well, either. For despite its extreme brightness it also claims a mighty contrast ratio of 200,000:1.

Furthermore, to boost its 3D credentials it manages a 480Hz drive rate for 3D playback, to tackle the thorny problem of crosstalk ghosting. This high drive rate is a potentially very important feature, especially considering that LCD has, to date, struggled more with crosstalk noise than the faster-responding DLP technology.

Further underlining the seriousness with which the TW9000W takes its 3D duties is the fact that it ships with two pairs of active shutter glasses free. We were also pleased to find the projector supporting two different 3D colour modes. 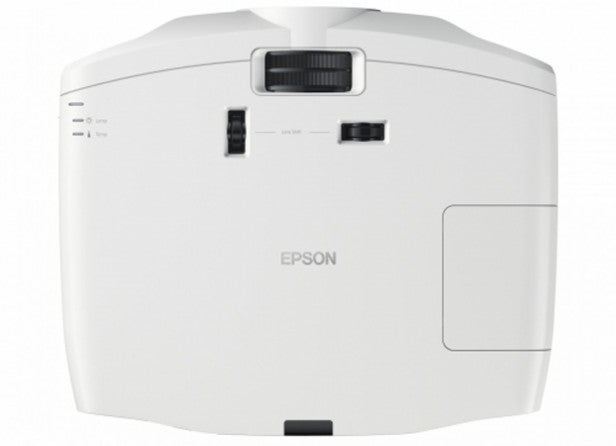 And no, we didn’t put the wrong model number there by mistake. For Epson really does have both a TW9000W and a TW9000, the differences being that the TW9000W is white and ships with a WirelessHD transmission system while the TW9000 is black and doesn’t support wireless video transmission.

Clearly the TW9000W’s ‘wi-fi’ video system warrants more attention – especially as it’s actually the first such integrated system we’ve tested on a TV or projector. The way it works is that you plug your source into a provided WirelessHD transmitter box’s HDMI slot, and then just select the WirelessHD input on the projector’s remote control. And that’s it. During our tests the projector usually synced with the Full HD transmissions from the transmitter – including 3D ones – in seconds, and the signal remained 100% stable once a connection was established. 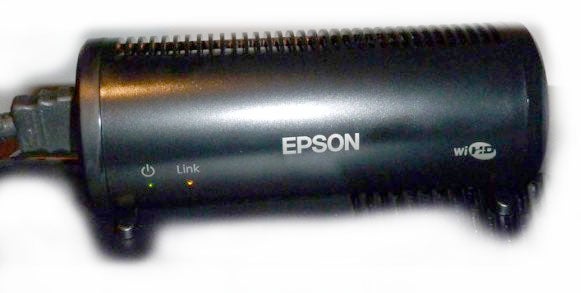 The WirelessHD syncing wasn’t completely flawless, though. Sometimes the projector didn’t register the transmitter at power up until we’d turned the transmitter off and then back on. But overall the WirelessHD system works well enough to make us wonder why the long-talked about Wireless HDMI standard hasn’t already been added to more home entertainment equipment.

Setting the TW9000W up is a brilliantly straightforward job. The projector’s 3D transmitter is built into the body of the projector for a start. Even better, the projector carries an extremely handy 2.1x level of optical zoom, adjusted – along with the focus – via simple and reasonably precise ‘wheels’ accessible from the top of the projector’s body. There are also two more wheels on the projector’s top, via which you can optically shift the image up and down or left and right over a pleasingly wide range.

The TW9000W also scores well with its connections. For as well as the headline wireless HDMI system, there are two HDMI sockets, a D-Sub PC port, a composite video jack (though obviously we’d strongly recommend that you never use this), a 12V trigger output, and finally an RS-232C port so that the projector can be integrated into a wider home control system.

So far the TW9000W has done nothing but impress, and this continues for the most part as we use the large, brilliantly organised and backlit remote to explore the fuss-free (if slightly drab) onscreen menus.

Certainly it’s welcome to find tucked away in these menus such key set up aids as a selection of thoughtfully calibrated picture presets; various Kelvin-based colour temperature settings; a separate skin tone adjustment; a series of gamma presets (including the 2.2 mode generally best for video playback) plus the option to set up your own customised setting; offset and gain adjustments for the red, green and blue colour elements; and further adjustments for the hue, saturation and brightness of the RGBCMY colour elements.

Inevitably we couldn’t resist kicking off our performance tests of the TW9000W by checking out its 3D capabilities. And initially we felt just a touch disappointed. Sure, there are some really great things to report, such as the 3D pictures’ brightness, colour intensity and emphatic HD resolution.

Indeed, in the first two of these picture characteristics in particular, the TW9000W is arguably the pick of the mid-range 3D projector crowd right now. Especially as the colour correction of its 3D mode seems exceptionally well judged.

However, it was also impossible at the start of our tests to miss the fact that 3D pictures suffer a little with the dreaded crosstalk. To be fair, this seldom appears over the main focus of a 3D frame, and is also rare during bright scenes. But during dark scenes subtle crosstalk can cause backdrops to look slightly out of focus in a way now familiar from numeorus other 3D projectors and LCD TVs. Hmm.

Handily, though, a little experimentation reveals that while you can’t completely eradicate crosstalk, you can certainly minimise it below the levels initially experienced. And all you have to do is switch the projector from its default 3D Dynamic preset to the provided 3D Cinema mode, which delivers its much-reduced crosstalk at the expense of what seemed to us to be an entirely acceptable reduction in brightness.

Epson’s 2D LCD projection credentials have been strong for many years now. So it’s actually no great surprise to find that the TW9000W’s 2D performance is very good indeed for its price point. Or at least it is once you’ve ironed out a few ‘wrinkles’. 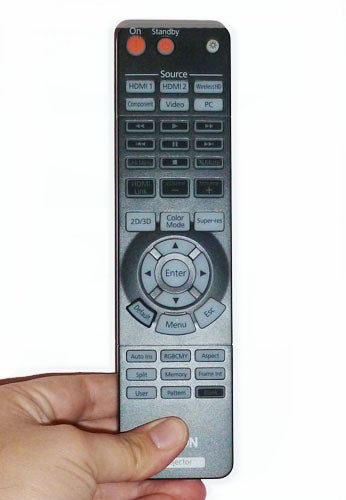 Looking at these wrinkles first, sticking just with the provided presets, we found the key Cinema and Natural modes both looking slightly over-warm thanks to a red bias. So we felt compelled to tone this down via the colour management system.

We also found the projector running slightly noisily in its Normal light output mode, making the Eco mode the much preferred option so long as you get your room decently dark. We’d also urge caution with the dynamic iris option, for while this can slightly improve the apparent contrast, it also causes a minor sporadic ‘burring’ noise from the projector – though the shifts in brightness aren’t distracting or ‘vulgar’ like they can be on many other dynamic contrast projectors.

Perhaps the single most irritating flaw of the TW9000W – as it’s one we couldn’t find a way round – is the way it seems to lose focus slightly from time to time, requiring a readjustment. We’ve noticed this issue too with some previous Epson projectors over protracted use. 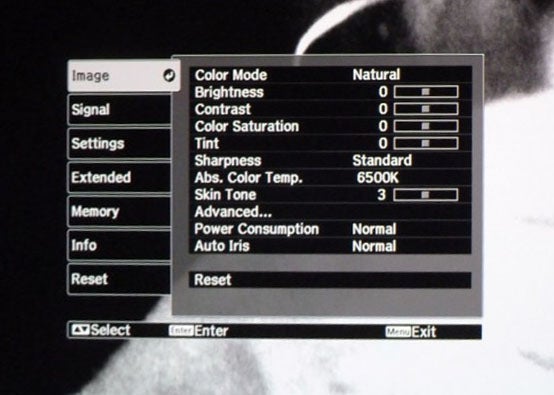 Getting into the good stuff about the TW9000W’s performance, its contrast is excellent, even using the Eco lamp mode. Blacks look deep and natural, yet this is accomplished without ‘squeezing out’ shadow detail as happens with many lesser affordable projectors.

The strong black level performance can be achieved without needing the auto contrast system too, making it easier for some punchy whites and colours to share screen space with rich black tones.

Colours look accurate and subtle once the initial red undertone has been manipulated away, and HD pictures look effortlessly detailed and crisp. Motion is handled very well too, even without the provided Frame Interpolation system. However, if you do want to reduce even the slight amount of judder found in the TW9000W’s standard mode, the Frame Interpolation system’s lowest setting reduces judder while introducing practically no unpleasant side effects.

With some comfortably above average standard def upscaling also among the TW9000W’s talents, the bottom line is that after a little calibration work and except for when the focus drifts, the TW9000W’s 2D pictures are as relaxing and immersive as they are pure and sharp.

Verdict
It may have taken Epson longer to deliver a 3D projector than expected, but based on the TW9000W, the wait has been more than worthwhile. It isn’t without its flaws and needs a little calibration work to get the very best out of it, but overall it’s a stellar effort with both 3D and 2D.