While there aren't too many updates to write home about, the DJI OM 4 is still the best mobile gimbal you can buy right now. The new magnetic clasp makes attaching your phone easier than ever, and the additional features found in the DJI Mimo app make for some great filming moments, but it's hardly the most essential upgrade if you already own a DJI Osmo Mobile 3. If you're on the market for your first mobile gimbal however, then look no further than the DJI OM 4.

After trouncing the competition with one of our favourite mobile gimbals, DJI is back with the new DJI Osmo Mobile 4 – excuse me, the DJI OM 4.

Don’t be thrown by the slightly skewered naming convention, the DJI OM 4 is every bit a sequel to the DJI Osmo Mobile 3 as you’d expect. While the jump isn’t quite as monumental as what we saw moving from the DJI Osmo Mobile 2 to the Mobile 3, the OM 4 does pack one new feature on the surface (and several under the hood) that could still attract the attention of die-hard Mobile 3 users.

One crucial change worth mentioning however is that while the Osmo Mobile 3 debuted with a cheaper price than its successor, the OM 4 has gone in a different direction, asking for £139.99 over the Mobile 3’s £99 price tag.

Given that the Osmo Mobile 3 was, and still is, one of the best mobile gimbals you can buy, the OM 4 has something of an uphill battle on its hands to convince users to upgrade. After thorough testing, we have our own verdict on which DJI mobile gimbal to go for in 2020. 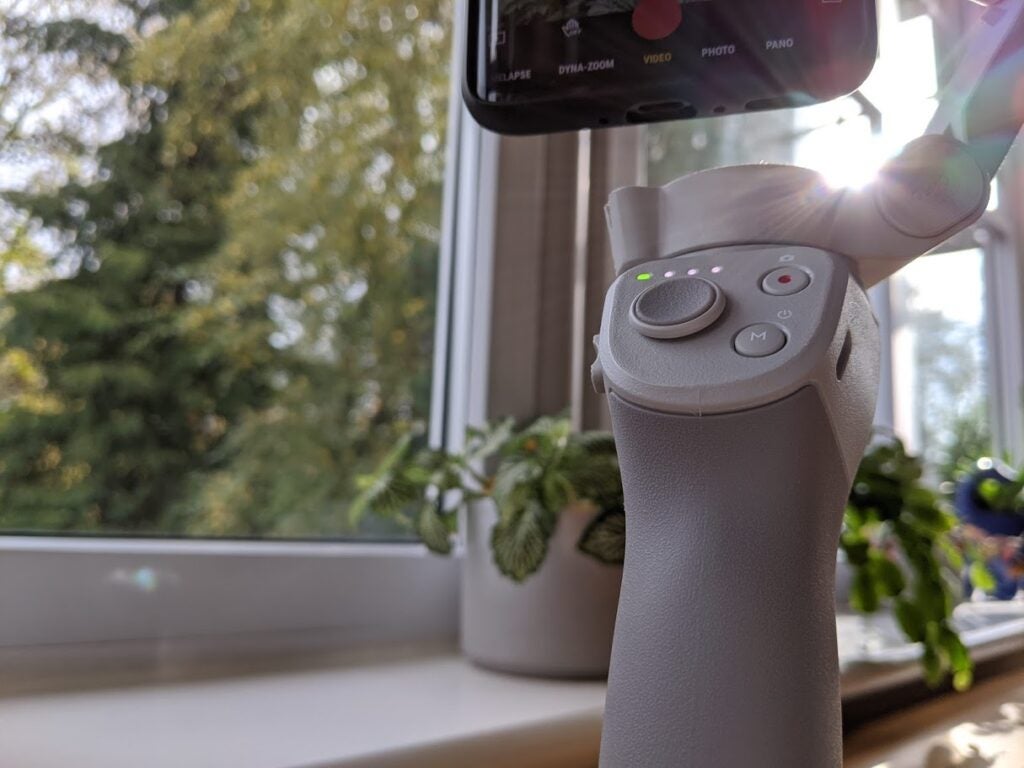 Design – time to break out the magnets

At a glance, there’s very little to separate the two most recent DJI Osmo Mobile gimbals, outside of a colour change to light grey on the OM 4. The OM 4 carries a lot of what worked on the Mobile 3 over, including the improved grip, the foldable design and a more ergonomic analogue stick for controlling the direction of the gimbal. Given that these aspects worked so well on the Mobile 3, I don’t blame DJI for not wanting to reinvent the wheel this time around, although any fans expecting a complete overhaul might have to wait for another iteration.

Strangely enough, while the OM 4 is just a fraction smaller than its predecessor, it’s also just a touch heavier to hold. While the Mobile 3 weighed in at 405g, the body of the OM 4 combined with the newly improved clasp total in at 422.6g. Why the extra weight? Simple, it’s all about the magnets.

In case you haven’t heard, the OM 4’s big new feature is its move away from the clunky and cumbersome built-in clasps of old, to the inclusion of a whole new magnetic set-up that allows users to snap their phone to the gimbal faster than ever. I’ll admit, I was incredibly anxious about the idea of giving up the safety of my phone to a bunch of magnets, but DJI’s created a fairly robust system here.

For starters, the magnets themselves are surprisingly tough. It takes a serious yank to pull your phone away the gimbal, so it’s highly unlikely that a strong gust of wind or a knock could ever disconnect the two devices. 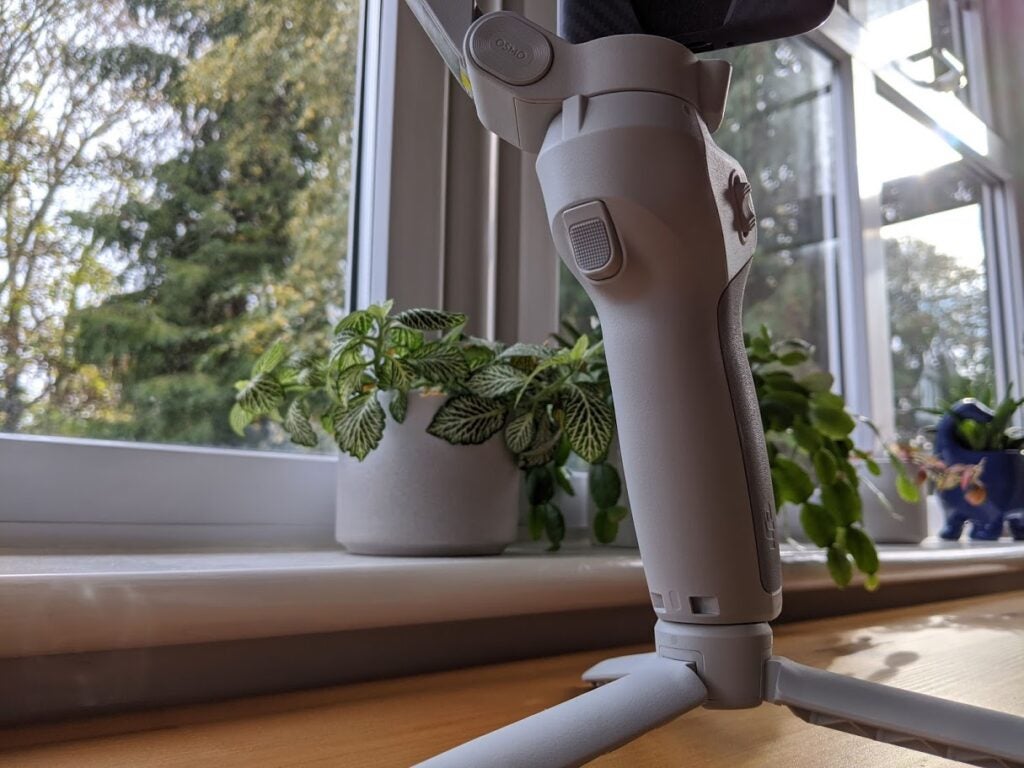 There are two options included within the box, a traditional-style clasp magnet that’s reminiscent of the Osmo Mobile 3 design, and an adhesive magnet that you can stick directly to the back of your phone so that you’re always ready to go for some quick gimbal action. There’s even a ring grip surrounding the magnet, so it’s a practical bit of kit when not being used for filming.

These magnets, while not exactly the game-changer needed to warrant an upgrade over last year’s gimbal, do present an easier experience overall. One gripe I had with the Osmo Mobile 3 was that it could be quite fiddly to cradle your phone in the clasp, but with the clasp now detachable from the gimbal itself, this is no longer an issue on the DJI OM 4.

As we mentioned in our testing for the Osmo Mobile 3, what really sells DJI’s mobile gimbals beyond the hardware is the superb DJI Mimo app, which offers users a bevy of filmmaking tools beyond what you’d find on a typical camera app. The best part is that DJI Mimo has only gotten better since we last took a look at it.

Timed with the release of the DJI OM 4, the Mimo app has added several new features that add a bit of cinematic flare to the proceedings. The highlight of the bunch is the Dyna-Zoom function, which is DJI’s rebranding of the iconic ‘Dolly Zoom’ effect from classic Hollywood films where the camera is being pushed towards a subject, all while the lens is zooming away. It creates a disorienting effect that’s particularly great for selling tension during a scene (think about when Chief Martin Brody spots the shark for the first time in Jaws). 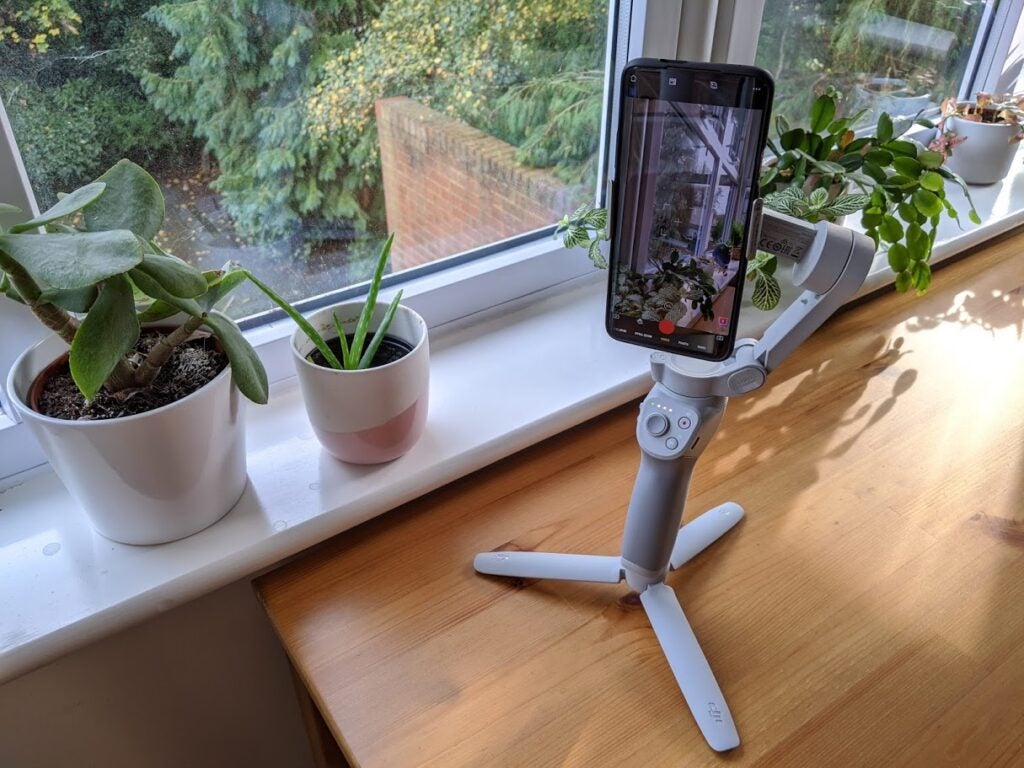 You can reverse this feature by away from a subject while the camera lens zooms in. It all works surprisingly well, and gets you just that bit closer to feeling like you could be a great filmmaker someday – hey, a man can dream right?

DJI’s also thrown ‘Clone Me’ into the mix, which lets you jump between different frames as the OM 4 takes a panoramic shot, giving the final impression that you’re somehow in several places at once. It’s definitely on the sillier side of the feature-set, but I had an enjoyable time running around, attempting to create some awe-inspiring triptychs that would’ve taken a decent amount of skill on photoshop to pull off.

These new features are all on top of the existing DJI Mimo infrastructure, boasting the likes of Active Track, timelapse, hyperlapse and my personal favourite, gesture detection which gets the camera to start filming and automatically track your face once you make a peace sign. It’s all incredibly easy to use, and yet it’s only one half of the app.

Once you’ve shot all the footage you need, the DJI Mimo app has a surprisingly robust editing suite built-in. Long gone are the days of apps trying to play a desperate catch up game to more fully-featured editing software, the Mimo app lets you splice footage, add overlays such as filters, text, transitions and stickers. There’s even a music library with royalty free tracks that you can use to really bring your video to life. 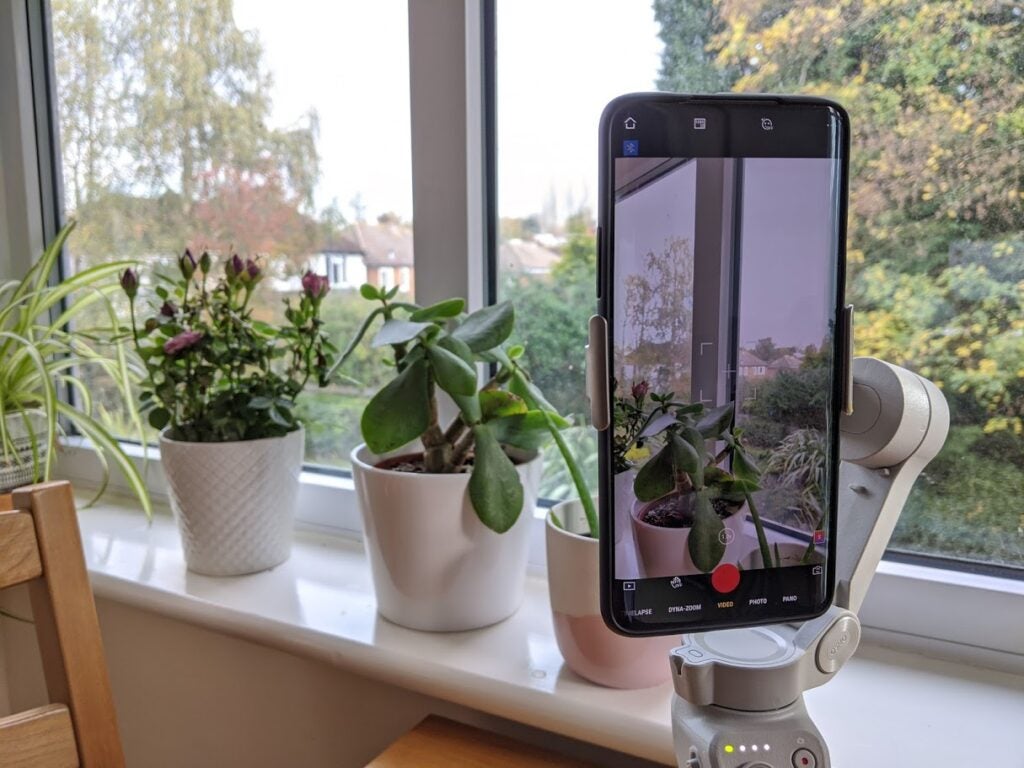 If you’re pressed for time and just want to get a short collection of clips straight on to social media, the Mimo app also has you covered there too. The ‘My Story’ section lets you choose from a bunch of different templates where you simply pick the clips you want to smush together and the app does the work for you.

Between aforementioned features like these, and the social elements that let you see what others have created within the DJI Mimo app, there’s very little to leave you wanting. Simply put, the OM 4 is great but the Mimo app takes it to a whole other level

If you’ve never used a mobile gimbal before and you’re considering the OM 4 as your first purchase in this market, then it’s definitely worth pointing out that while the OM 4 does improve the filming process considerably, there is a learning curve to understanding how the device works.

It’s not a simple case of attaching your smartphone and then flinging the gimbal in all directions – it’s far better to use a more delicate approach to get the best possible footage and avoid the gimbal from losing its point axis. Once you’re past this brief teething period, there’s a lot to like about the OM 4. 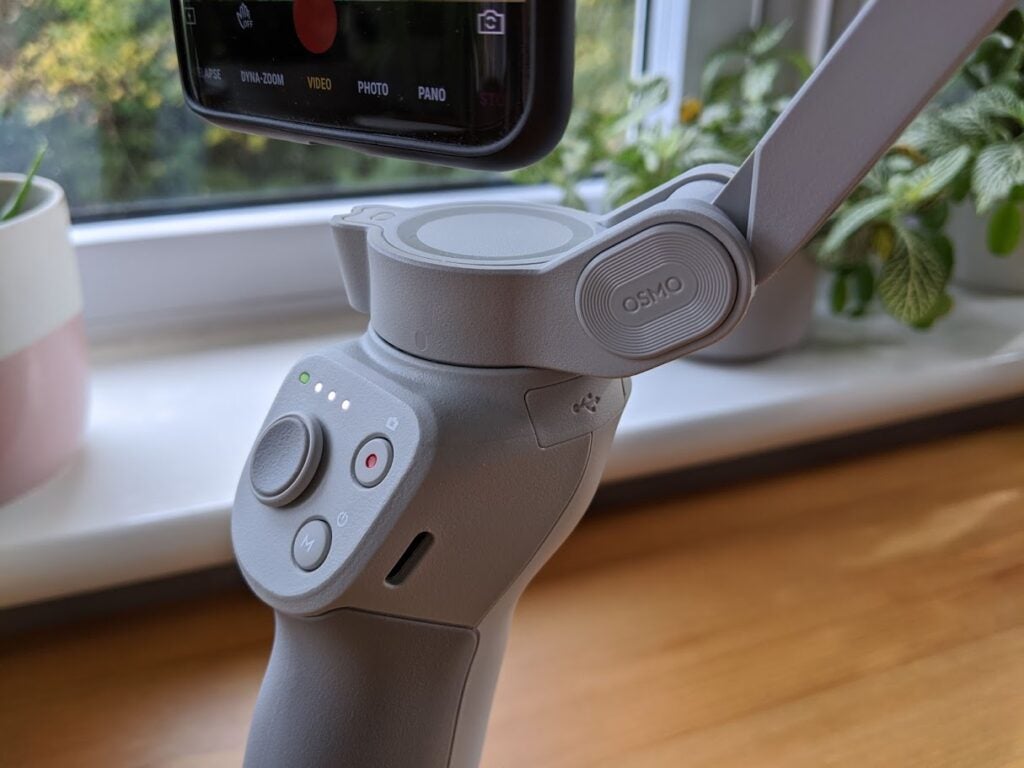 The OM 4’s texturised grip makes it easy to hold in the hand, and it’s lightweight enough that you can get away with holding it in front of your face for quite some time without feeling tired.

Almost all footage taken during testing showed a noticeable bump in quality, as I found myself spending more time focusing on the subjects at hand as opposed to the often lacklustre camerawork that stems from a handheld smartphone. The OM 4 certainly feels at its best when active track is switched on, making it incredibly easy to produce vlog-worthy content, so long as you have a decent smartphone camera that can keep up.

I did notice that on severely windy days, the OM 4 did have the odd wobble here and there during filming, something to bear in mind if you’re taking the OM 4 off on a long hiking trip.

DJI quotes a 15-hour long battery life for the OM 4 (the same as the Osmo Mobile 3), and after hours of filming it feels as though I’ve barely made a dent. There’s no fast charging prowess here so a full charge will take roughly two and half hours, but the OM 4’s large battery also allows the device to charge your phone during filming.

Should you buy the DJI OM 4?

At this point, DJI has already established itself as the go-to brand for smartphone filmmaking, and the DJI OM 4 doesn’t disappoint. The gimbal isn’t perfect and can run into some trouble with severe wind, but you’ll be hard pushed to find a better mobile gimbal out there.

From the easy to use on-board controls, its portable nature and the accompanying DJI Mimo app, there is more than enough to get you started on your filmmaking journey. It might not be an essential upgrade for DJI Osmo Mobile 3 users, but for everyone else, the DJI OM 4 is the best mobile gimbal to buy right now.