A great way to level up your smartphone video, the Osmo Mobile 3 combines solid stabilisation, versatile camera moves and excellent value. There's a slight learning curve to mastering its many tricks and it's a shame there's no livestreaming in the Mimo app yet. But its folding design makes it much more portable, which means you feel inclined to take it out more often, and new features like phone charging make it an improvement over its predecessor. There are even cheaper smartphone gimbals out there, but DJI's software tricks like ActiveTrack give it this the edge over its rivals.

DJI’s relentless quest to give us a video-shooting gadget for every possible situation has produced the Osmo Mobile 3 – a £99 gimbal for your smartphone.

So what’s new? The biggest changes from the Osmo Mobile 2 are a new folding gimbal arm for extra stashibility, plus that lower price tag – it’s dipped under £100 for the first time.

Despite that highly tempting headline figure, I’d recommend going for the £119 bundle, which includes two very useful extras: a mini tripod and a hard case. Even at that price it’s a brilliant buy, with all the same excellent stabilisation and flashy camera moves as its predecessor, which was already our favourite way to level up our smartphone’s video.

While today’s smartphones often have excellent electronic and optical stabilisation, the real benefit of the Osmo Mobile 3 is its pro-looking camera tricks – from ActiveTrack to Timelapses – which make it a fine, affordable sidekick for YouTubers, vloggers or anyone who wants to make a particularly glossy holiday album.

Foldable smartphones might not have taken off yet, but the design makes a lot more sense for gimbals, which can usually at best be described as ‘clunky’.

The Osmo Mobile 3 isn’t the first smartphone gimbal to perform this trick – that honour went to the very similar Benro 3XS Lite – but it is the best one I’ve tried so far. On the left is a zoom switch, while on the front you get a joystick (for manual pans), a shutter button and mode button – double press the latter and it’ll flip between horizontal and portrait shooting

The mechanism works really well, with no latches to faff around with, and it folds into a much smaller bundle than the Osmo Mobile 2.

It’s still far from pocketable (unlike the DJI Osmo Pocket), but you can easily carry it around one-handed with your phone clamped inside. This reduces the number of times you need to pack the whole thing away and re-balance it, which was always an issue with previous Osmos. While that’s the biggest physical change from its predecessor, there are four other handy tweaks. The front-mounted trigger returns from the original Osmo Mobile, which is a comfortable way to make your gimbal behave itself (one press locks it, while two makes it instantly re-centre).

Another change is that you now instantly flip between landscape and portrait shooting with a double-tap of the ‘M’ button. The grip now leans forward a bit more and has a rubberised grip. And the final, and perhaps most useful, tweak is that you can now access your phone’s port while in landscape mode. This means you can charge your phone via the Osmo Mobile 3’s new USB-C port while roving around shooting your guerilla masterpiece. Considering DJI’s gimbal has a 15-hour battery life, your phone will likely run out of juice first, so it’s handy to be able to top it up between shooting locations.

Aside from these changes, the Osmo Mobile 3 is the same trusty sidekick that we called “the best gimbal available” last year. The cradle can stretch wide enough to take phones that are up to 88mm wide and 9.5mm thick, which covers most of them. The 6.8-inch Galaxy Note 10 Plus, for example, is 77mm wide and 7.9mm thick. 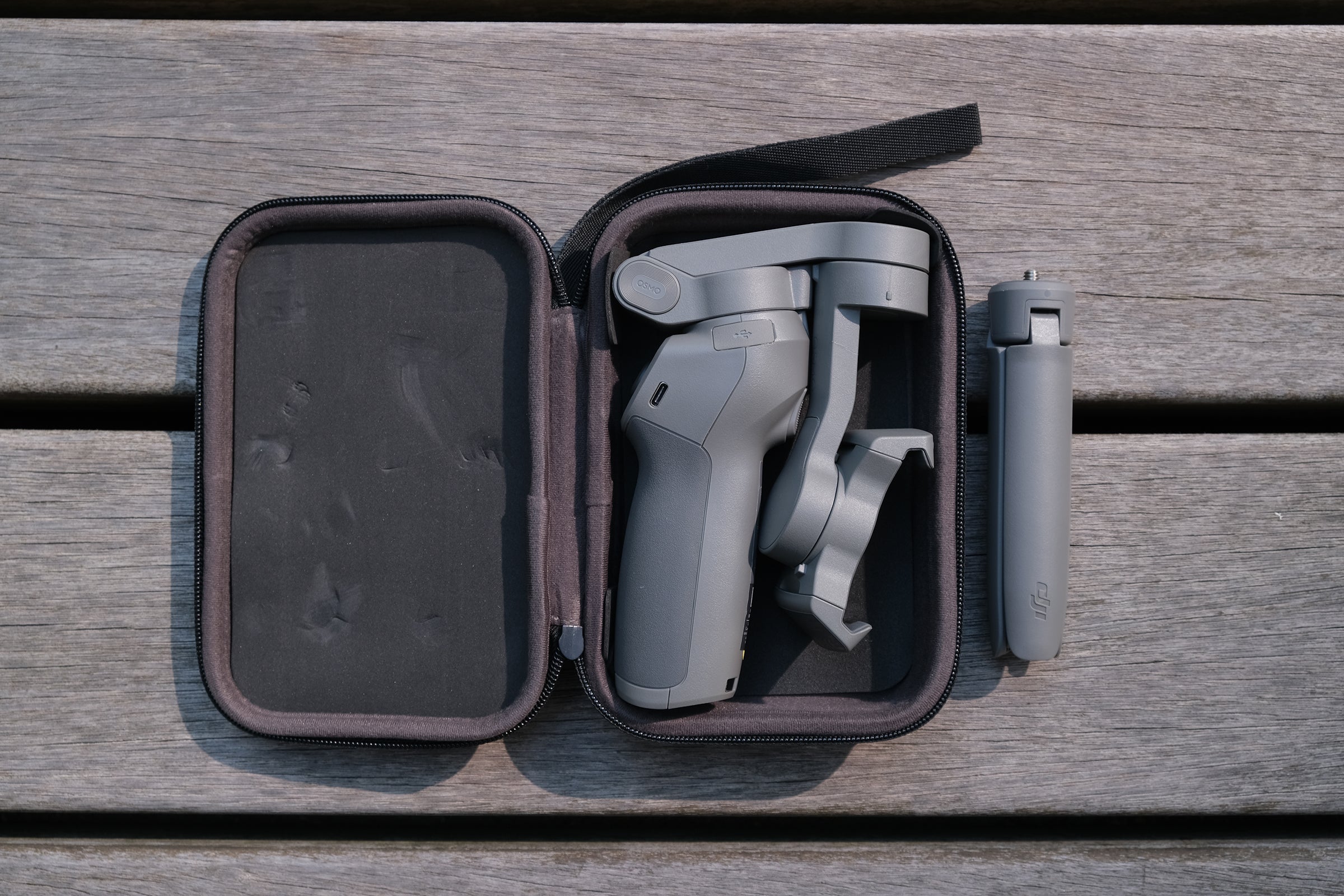 The £119 Osmo Mobile 3 Combo bundle gives you this hard case and tripod, though it’s unfortunately quite a squeeze to get both in the case

If you haven’t used a gimbal before, there’s a slight learning curve – you have to balance your phone, for a start, and wrap your head around quite a few button combinations. It takes a little while to build up the muscle memory, but once you do you’ll become a certified timelapse addict.

While the standard £99 Osmo Mobile 3 bundle (which includes a pouch and anti-slip pads) is temptingly priced, I’d recommend stumping up the extra £20 for the Osmo Mobile 3 Combo bundle I was fortunate enough to review.

This includes a tripod – which is essential for timelapses, and very useful for balancing your phone – and a hard case that keeps it safely cocooned while in your bag. The Osmo Mobile 3’s 1/4-inch thread is compatible with standard tripods, of course, but this one is just the right size and that extra protection could well help the motor last a good while longer.

The Osmo Mobile 3’s special sauce, compared to other smartphone gimbals, is its DJI Mimo app which you connect to via Bluetooth.

It’s pretty polished and serves up a number of special camera moves, which your phone simply can’t pull off on its own (unless you’ve spent years in training as a gimbal-like ninja). 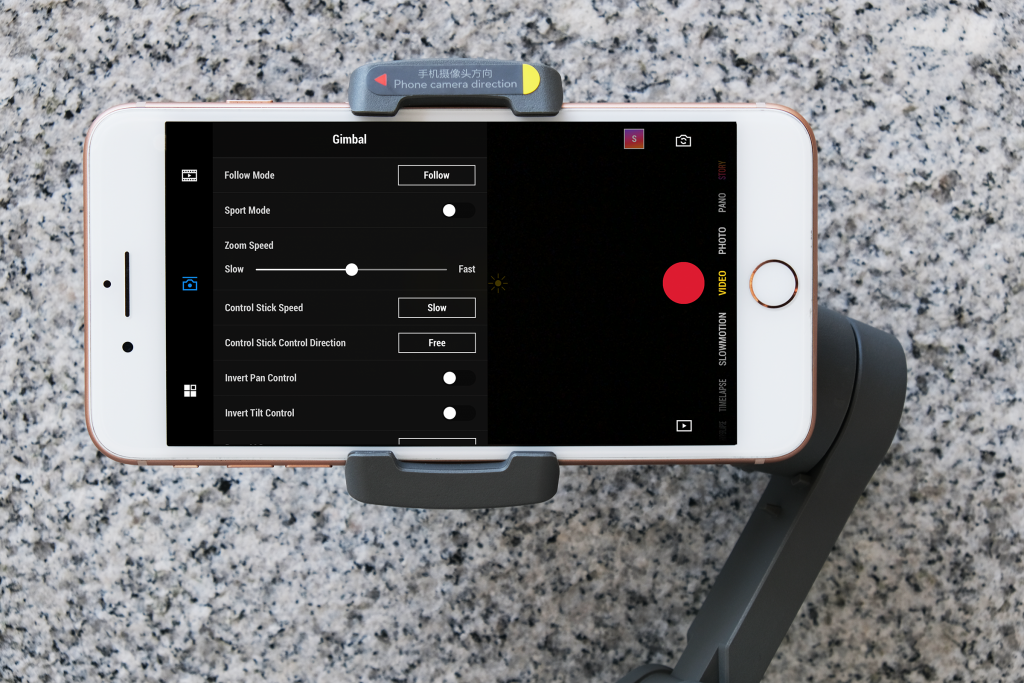 One of the best is ActiveTrack. This DJI staple confidently locks onto objects and faces allows the gimbal to follow your subject around with unerring (and slightly disturbing) accuracy.

It’s great for solo vloggers who want to set up a virtual camera-man to keep them in shot, but also helps compensate for the lack of a ‘path’ option in standard video mode.

In Timelapse mode, this ‘path’ menu lets you pick up to four points from across your scene for the camera to move between, which means you can go beyond the standard horizontal pan set up more dramatic diagonal arcs.

Other modes include Hyperlapse (like a timelapse, only without the camera being in a fixed place), slow motion (iOS-only), panoramas, stills and Story mode. The most useful are the first two, and you can see examples in the video below.

The Mimo app isn’t perfect. I tried it on both a Sony Xperia 1 and Apple iPhone 8 Plus, and it’s better on iOS – you can, for example, only shoot in 30fps on Android with no 60fps option, and slow motion is currently only available on iOS, which is a shame. The Mimo app’s gallery handily labels what format you recorded your clips in, whether that’s slo-mo or standard video.

Still, the app is otherwise pretty feature-rich, with a Manual mode that lets you tweak shutter speeds, ISO and exposure compensation. In the options you can also change the control stick’s speed (I found it best to go with ‘slow’ for manual pans) and flick it into Sport mode, which helps it react well to being in the middle of sporting action.

It’d be nice to see a ‘path’ mode for standard video (rather than just timelapses) and YouTubers will be disappointed to find that there’s still no livestreaming option in the Mimo app. But it’s otherwise a solid and reliable companion to the Osmo Mobile 3.

The Osmo Mobile 3’s stabilisation is very impressive and, despite improvements in smartphone EIS and OIS since its predecessor, it’s still a big step up in terms of the quality of the footage you can produce.

The benefit of a gimbal is the combination of stabilisation with camera moves, whether those are automated (using features like ActiveTrack and timelapses) or done manually using the joystick.

There were odd occasions when my movements overloaded the gimbal’s motor and it can be difficult to keep joystick pans moving at a consistent speed. Your camera roll won’t be packed with wall-to-wall keepers and you’ll still need to do some editing.

But keep your ‘instant Terrence Malick’ expectations in check and you’ll find that you’re producing some very polished looking clips than can be woven together later. This, of course, depends on the quality of your phone’s video shooting, but even today’s budget and mid-range phones are very capable in this department.

I didn’t really find there was any real battle between my iPhone 8 Plus’ electronic stabilisation and the Osmo Mobile 3, and found it possible to get around its pretty limited vertical tilt by moving my hand out to the side. The Osmo Mobile 3’s thread is compatible with all standard tripods, but the one in the £119 Combo bundle is the ideal size and feels pretty sturdy

While the stabilisation is excellent, it’s not completely infallible. When I put it on a vibrating platform between two escalators it struggled to smooth out the judder, and slowing down my 60fps running footage clearly shows some distracting vertical movement. However, these are extreme examples and in most situations you’ll find it helps your phone produce buttery-smooth clips.

The Osmo Mobile 3’s battery life is superb – so good, that I didn’t have to charge it once after several days of testing – and the new gesture controls work well too, letting you start a clip by giving your camera a peace sign or showing it your palm. This also starts ActiveTrack, which makes this a brilliant budget vlogging tool, if you don’t mind your phone lens’ slightly unflattering focal length and lack of natural bokeh.

Should I buy the DJI Osmo Mobile 3?

If you’re looking for an affordable way to create pro-looking videos for social media or your digital holiday albums, then you should certainly buy the Osmo Mobile 3.

It mixes excellent stabilisation, a feature-packed app, a handy new folding design and superb battery life, not to mention impressive value with that new £99 price tag. That said, if you don’t already have a mini tripod, I recommend getting the £119 Combo bundle.

The Osmo Mobile 3 isn’t completely without its usability issues – having to regularly re-balance your phone can be a faff, and the sheer number button combinations can take a while to wrap your head around. This means some prospective buyers might well be considering the Osmo Pocket instead. While that gimbal’s built-in camera means it’s smaller and generally quicker to set up for each shot, it does also need your phone mounted on its side to really unlock its potential, and also doesn’t come bundled with a joystick.

While I’m a big fan of the Osmo Pocket, both of these issues limit its advantages, and it does also cost £230 more, making the Osmo Mobile 3 the better buy for most people – assuming you have a smartphone that shoots video quality you’re happy with.

DJI’s Mimo app currently lacks some features like livestreaming, but the ones it does have – particularly the excellent ActiveTrack – really give it the edge over cheaper rivals and mark it out as the best smartphone gimbal around.