Editor’s note: DJI has just announced the Osmo Mobile 3, a successor to this model that costs £99. We’ll be reviewing that soon, but in the meantime here’s our review of the Osmo Mobile 2…

What is the DJI Osmo Mobile 2?

If you’ve ever been disappointed by shakey smartphone video, you might do well to consider a motorised gimbal to smooth out your footage. The Osmo Mobile 2 is the second smartphone gimbal from DJI, the company most well-known for its drones.

The Osmo Mobile 2 takes much of what was great about the original Osmo Mobile, but makes it lighter and, most importantly, cheaper. It costs just £129, whereas its predecessor launched at around £299.

If you’d like to take your smartphone video to the next level, the DJI Osmo Mobile 2 is absolutely worth considering and the best gimbal available.

DJI has retained much of the original’s design but has made a few important tweaks. In truth, there isn’t much to differentiate one smartphone gimbal from the next: these are all devices designed to be held in-hand with your smartphone clamped in place.

However, what is new here is the material from which the Osmo Mobile 2 is constructed. DJI says it’s made from high-strength modified nylon, which goes some way to explain how the device has shed a few pounds. 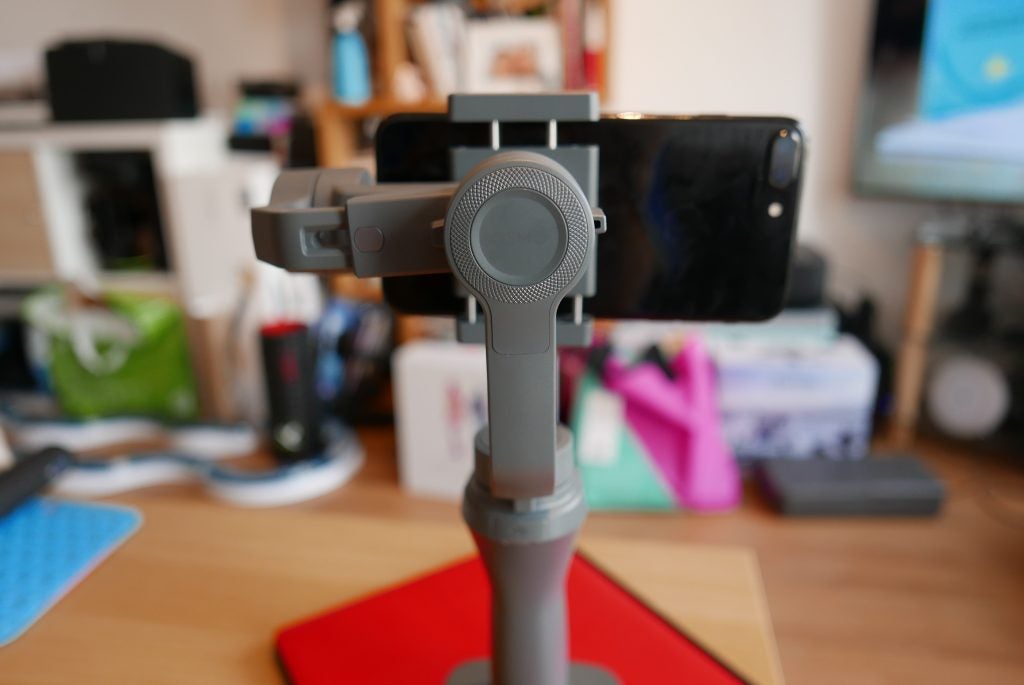 The Osmo Mobile 2 weighs 485g (without your smartphone of choice attached) compared to the 501g of the original. It may not sound like much, but the reduction is certainly noticeable when you’ve been using the Osmo Mobile 2 for a long time. DJI has also contoured the grip for a more ergonomic feel, which again helps when using the device for prolonged periods.

Elsewhere, many of the buttons and controls remain familiar. There’s a joystick to adjust the camera angle, a record button, and a power/mode button for swapping between the camera’s different gimbal modes. A zoom rocker is located on the side, letting you adjust the zoom of your phone’s camera. 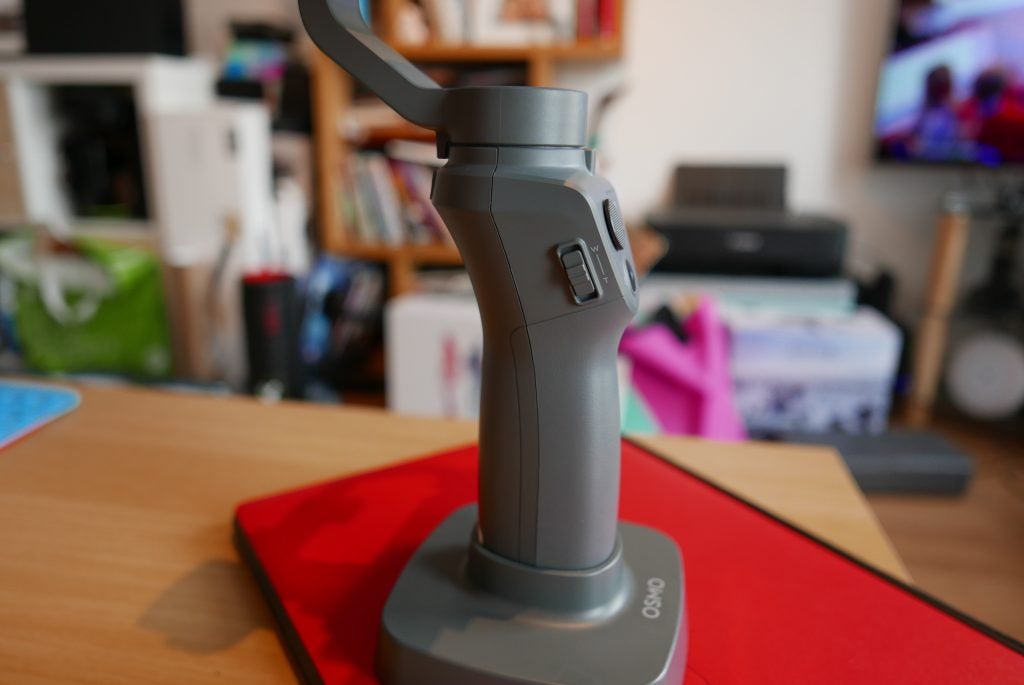 The Osmo Mobile 2 holds your phone with a spring-loaded clamp, rather than you having to adjust a screw to lock your phone in place as was the case before. It’s able to support phones up to phablet size; but you might have to remove the case if your device is on the larger end of the spectrum. The Osmo Mobile 2 wouldn’t play nice with my iPhone 7 Plus whilst it was in its relatively thick and heavy silicone case, for example. 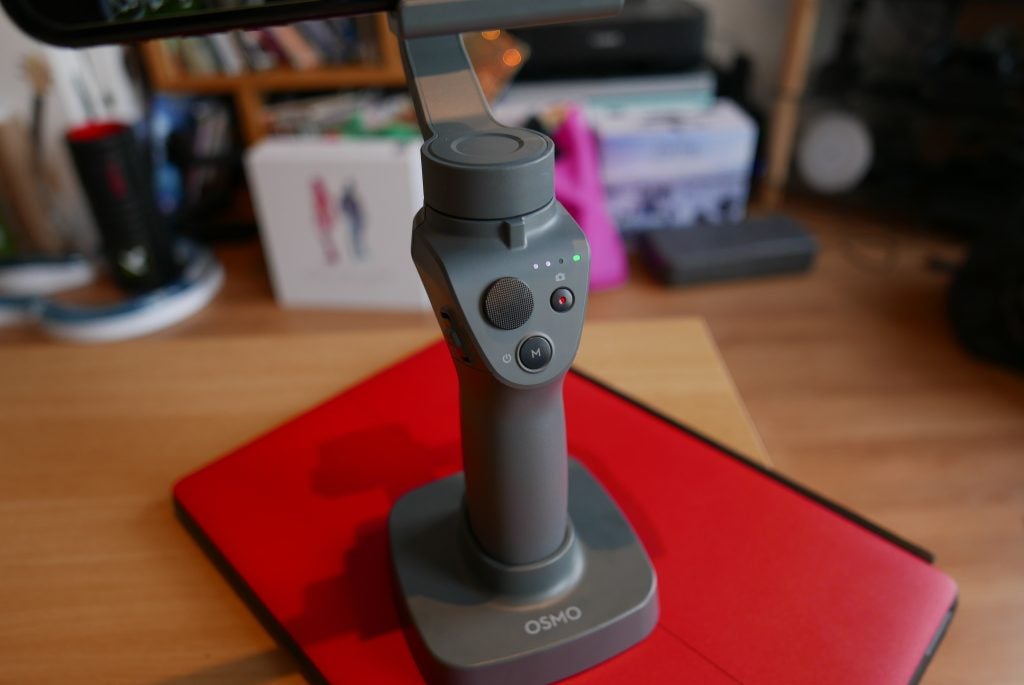 One of the biggest changes with the Osmo Mobile 2 is the ability to orient your smartphone in portrait mode. Previously, the Osmo Mobile would only hold your phone in a more standard landscape.

In the past, recording video in portrait orientation might have been frowned upon, but with the existence of Snapchat and Instagram Stories, increasingly folk wish to format their videos for these platforms. 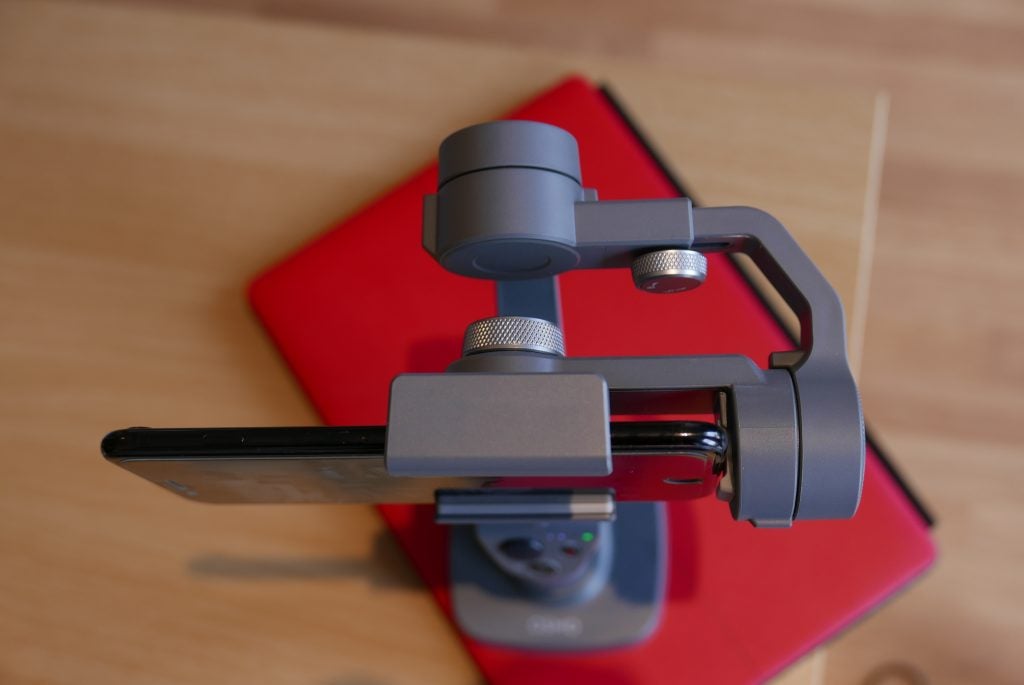 Frustratingly, you have to unlock the smartphone clamp and physically rotate it to swap between portrait and landscape orientation. Plus, you might find you have to remove your smartphone from the clamp in order to do this. I’ve used smartphone gimbals that can achieve this position swap just by hitting a button – the motor takes care of re-orientating the camera. It’s a bit more fiddly on the Osmo Mobile 2.

The other change is that the Osmo Mobile 2’s battery is now fixed, rather than user-replaceable. Normally that would be bad news; being able to swap out a battery can be a life-saver. But in the Osmo Mobile 2, battery life has been bumped up to around 15 hours off a single charge (9600mAh battery). This is a significant jump up on the 5 hours of the original Osmo Mobile (980mAh battery). 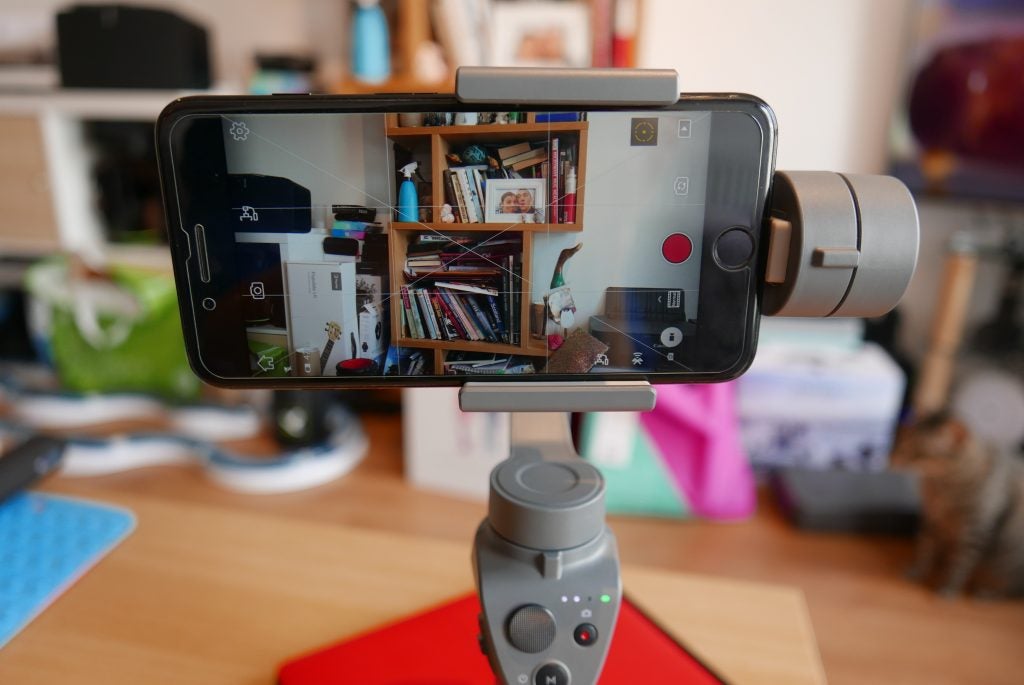 Better yet, there’s also a USB port to which you can connect your smartphone to use the Osmo Mobile 2 as a portable battery charger. Obviously, this will drain the Osmo Mobile 2’s battery faster, but it could get you out of a bind on a shoot. The Osmo Mobile 2 charges via Micro USB, as opposed to USB-C, which is a shame given the latter is now becoming more ubiquitous.

The bottom of the Osmo Mobile 2 has a standard thread through which you can attach it to a tripod. This is particularly useful to take advantage of its moving timelapse capabilities. The base is flat, so you might find the Osmo Mobile 2 is able to stand up on its own – but there’s a screw in stand included, which provides a far more secure base.

The Osmo Mobile 2 pairs with your iPhone or Android phone through Bluetooth and can then be controlled using its DJI Go companion app. There’s nothing to stop you from simply using your phone’s default video app, but you’ll get so much more if you use DJI’s software. 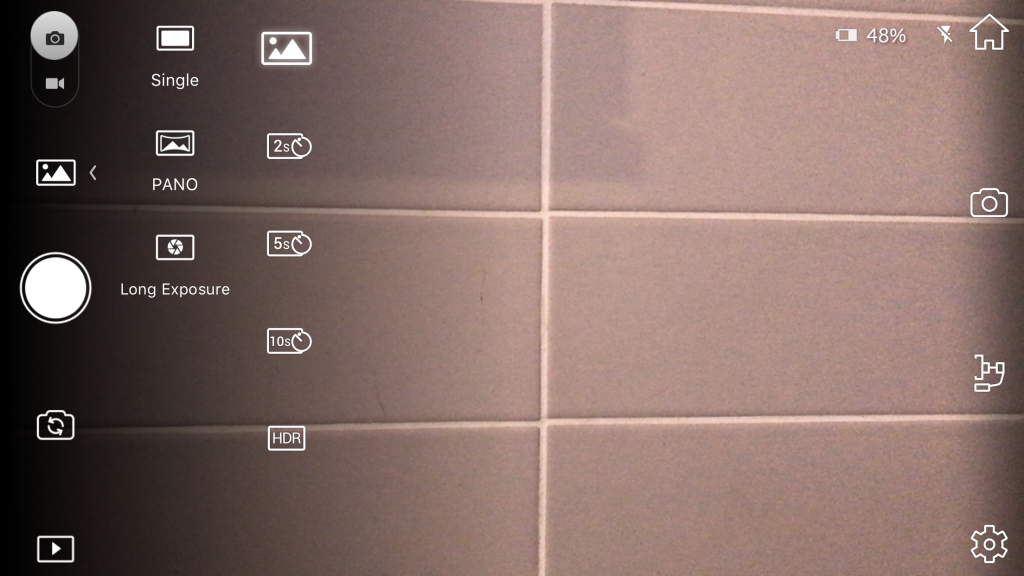 The app lets you take advantage of the aforementioned moving timelapse and hyperlapse features, as well as the target follow modes. Like the company’s drones, you can put a target on a subject and the gimbal will keep it locked in and adjust the gimbal to keep it in-frame.

If you’re a one-person vlogger, you might find ActiveTrack particularly useful if the Osmo Mobile 2 is to remain in a fixed position but you’ll be moving around. It’s also useful if you want to lock onto a stationary target and move the camera around it. It’s great for quick product hands-on videos. 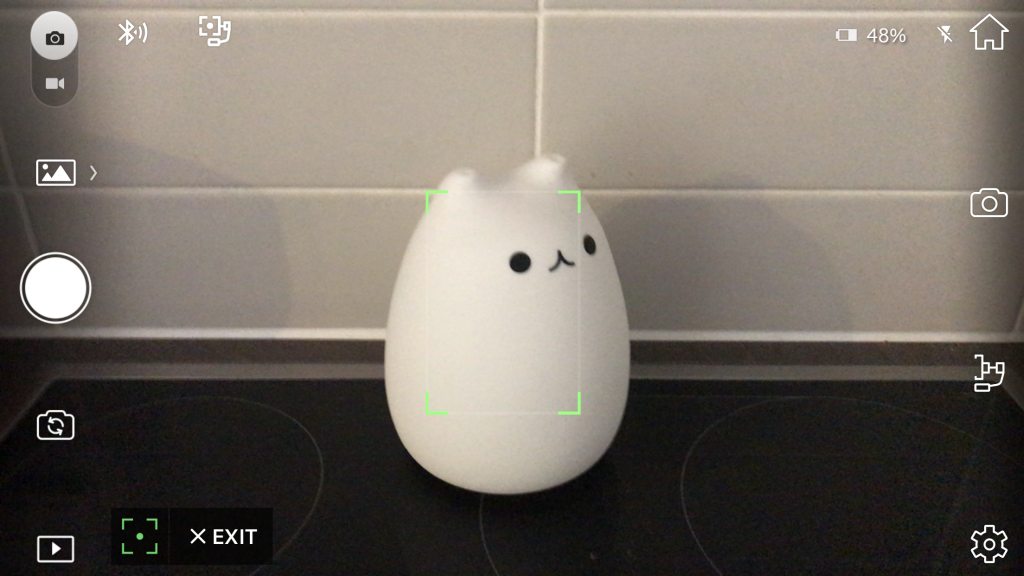 I found that tracking worked pretty consistently, save for trickier scenarios in which there wasn’t much contrast in the shot or if I was heavily backlit, making it difficult for the DJI Go software to pick me out. It’s a problem I’ve encountered with other DJI’s drones on occasion.

The zoom rocker will only work with the DJI app’s video recorder, so there are a lot of reasons to opt for the optional app. It will also let you adjust the gimbal’s settings, swapping between standard walking or sport modes, which tweak the gimbal’s stabilisation. You can even invert the joystick controls, an option that’s missing in other gimbals.

As well as the DJI Go app, the Osmo Mobile 2 is compatible with the more professional video-capture FiLMiC Pro app. With this you can achieve more professional-looking shots from an iPhone or Android phone, and is worth a look for more serious budding videographers. 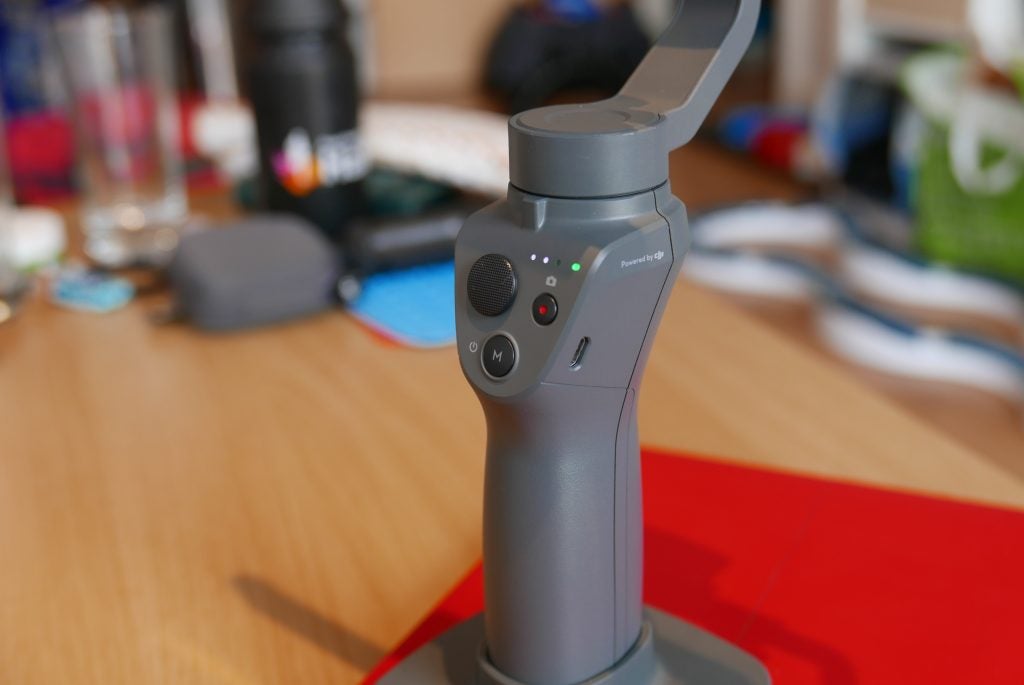 Controlling the Osmo Mobile 2 takes a little practise, and there’s a tutorial that runs you through the controls when you first use the app. The M button toggles the locked mode with a single press, whereas a double-press re-centres the gimbal and puts it back in follow mode. A triple-press will switch to your phone’s front-facing camera.

You can’t expect to get long continuous shots without any janky pans or angle adjustments. As such, you’ll need to edit your video accordingly, but the Osmo Mobile 2 does a great job of smoothing out your shots after you get used to it. It smoothed out some walking footage superbly.

Used appropriately, it’s possible to achieve fantastic results with the Osmo Mobile 2. Obviously, image quality itself will depend on your smartphone.

Why buy the DJI Osmo Mobile 2? 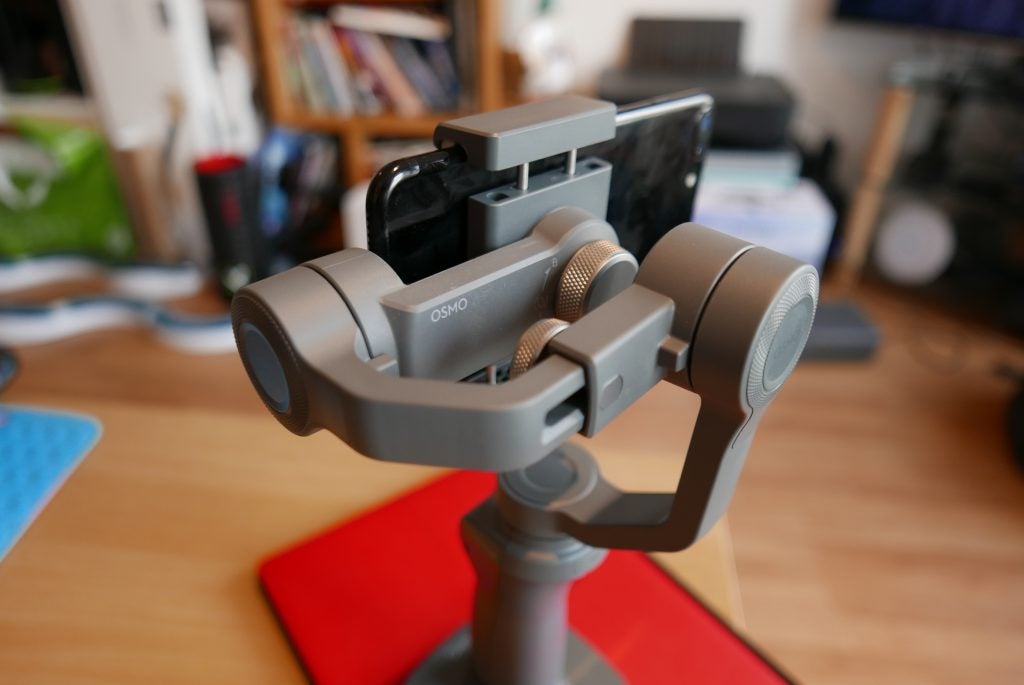 By drastically reducing the price and enhancing the handling, DJI has made the best smartphone gimbal currently available. It’s lightweight and comfortable to use, plus battery life has been boosted. Did I already mention the price has been drastically reduced? Because that’s worth mentioning again. In the past, rivals from other Chinese manufacturers like Feiyu-Tech and Zhiyun massively undercut the original Osmo Mobile, but now that’s no longer the case.

There are only a few things DJI could have done to improve the Osmo Mobile 2 further. This include making the switch from landscape to portrait mode less fiddly, and enlisting a shortcut to swivel the gimbal 180-degrees to record selfie video while continuing to use the superior rear-facing camera of your phone.

These are only minor quibbles, however. If you’re in the market for a gimbal, the DJI Osmo Mobile 2 is the model to buy.