Available on Xbox One, PS4 (version tested), Xbox 360, PS3
It seems like heresy to describe this as the definitive version of Diablo III but – hey – let’s just say it anyway. This is all of Diablo III, with two years’ worth of patches and changes rolled in, plus the additional content and enhancements from the Reaper of Souls expansion, all dolled up with console-friendly controls and matching interface tweaks.

You might find some areas, like selecting skills or managing inventory, where the PC version still comes up trumps, but the biggest surprise of playing this Ultimate Edition is that the PS4 now feels like Diablo’s natural home (the same almost certainly holds true for Xbox One, but we haven’t had that version to check).

With the DualShock 4 in hand, gone are the days of endless clicking. You can move your hero with the left analogue stick, firing off attacks and spells, ranged weapons and protective moves with the face buttons, bumpers and triggers. Flick the right stick in any direction and your hero rolls or backsteps out of harm’s way. Squeeze R2 or hold a pertinent face button and you’ll keep smacking away with the relevant attack until your enemy is out cold. A quick tap of the touch panel summons the Inventory and character screens, while the bumpers take you left and right through pages for managing inventory, skills, followers and quests. Even the D-Pad gets a look in, cycling through new loot so you can decide what to keep, what to equip and what to drop. 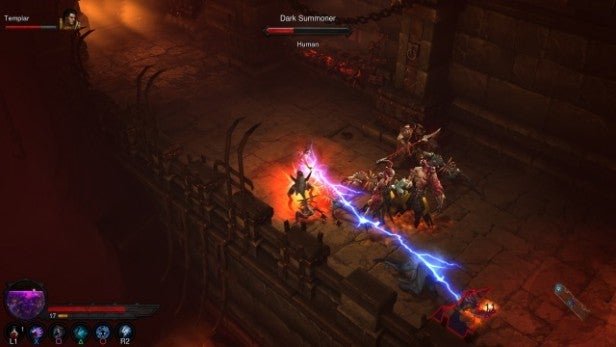 Played the PC version? For the first half hour of play the console interface might feel strange, but within an hour or two it’s second nature, and after three or four hours you’ll forget that you ever used a mouse. And by this point, of course, Diablo III will have you in its grip. This remains one of the most addictive games ever made.

Why? Well, it’s not the exploration or the combat. Diablo III is full of beautiful scenery and superbly-designed monsters, but there really is very, very little to do except make your way around each maze-like area, battering everything that moves and a few things that look like they might move if you took your eye off them for a second. The only skills involved are in working out which of your currently equipped skills or attacks is likely to be most effective against the current crop of monsters, making sure you maintain your health and avoiding the heaviest of incoming attacks if you can. There’s a level of strategy involved, but it’s no Dark Souls. 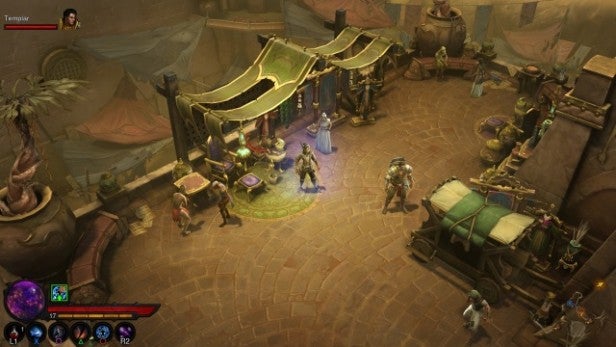 Nor is the story likely to keep you pushing through. There is an overarching storyline to the game’s five acts and we get a handful of colourful villains and the odd big shock. Yet Blizzard isn’t even attempting to rival Bioware here. The narrative is paper-thin in terms of character and plotting, and each twist is nothing more than an excuse to drag you through one wilderness area or dungeon after another – to the extent that you can often forget where you are and what you’re doing there, and simply focus on the ongoing brawl.

No, the real secret to Diablo III’s allure is that it’s perfected the classic cycle of the action RPG. You kill to earn XP and bag some loot, then level up to gain new powers, pausing to equip the choicest items of equipment as you go. Then you keep killing to find out what your new skills and stuff can do, and the whole cycle of bloodshed and bagging starts again. In Diablo III, it’s pretty much relentless. As long as you keep slaying the monsters you’ll keep on picking up new magic weapons, learning special attacks or more effective spells and finding new armour. In fact, it all happens at such a prodigious rate that you might well struggle to keep up. 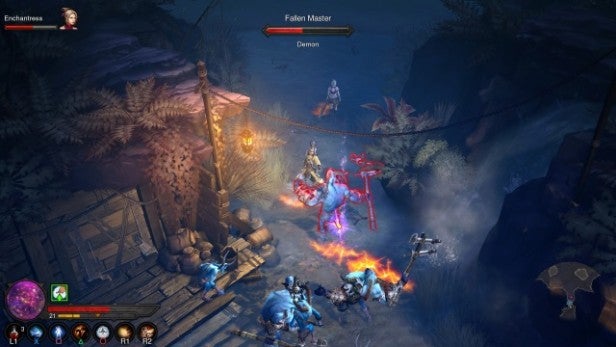 All the same, it’s hugely satisfying. You can start out as a loser with a magic missile or a weedy sword, and after a few hours you’ll be firing death rays into demon mobs or scattering foes with a blow of your hammer like Sauron at the start of Fellowship of the Ring. You’ll have recruited and trained up CPU-controlled allies, and they’ll be killing monsters by the dozen too. And the game’s mechanics are smart enough to capitalise on this, giving you XP boosts for massacring monsters in a larger kill-streak, not to mention health drops and health recharge perks that encourage an aggressive style of play.

There are character classes in Diablo III where it makes sense to hang back, but often the message is to keep slaying, keep looting, keep improving. Blizzard has also altered the difficulty mechanisms in the last two years, so that monsters scale to give you a challenge according to your chosen level. Finding Diablo III too easy? Just pause the game and ramp your difficulty level up. 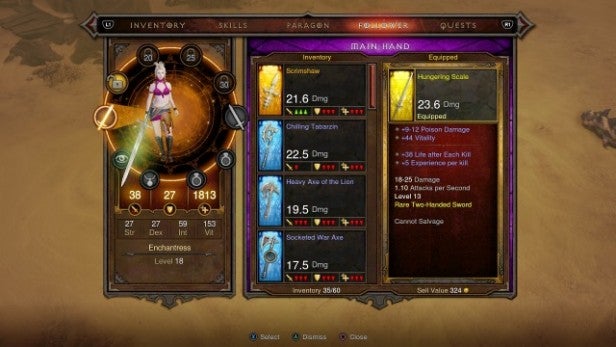 It’s all very slick, and it can be hours before you realise that you’re doing almost exactly the same thing for hour after hour, just with different spells and weapons. Only the locations, the monsters and the objective (if you can remember it) actually change. And even when you do realise, you still won’t care. Somehow, Diablo III makes a mildly monotonous task feel like the most absorbing and important thing a human being can do. It’s only afterwards – or in those odd occasions where you’re wandering fruitlessly around the current map – that you stop and ponder all that wasted time.

If it’s good solo, it only gets better once shared. You can play it online with friends or strangers – and the matchmaking’s very good too – but the ideal way to experience co-op Diablo III is local, offline play. Up to four of you can battle on with just one console, with four sets of meters allocated to each corner of the screen, and the map refusing to scroll unless all players are moving in the right direction. You have to endure the game pausing every time someone wants to switch skills or swap their sword, but generally it works. It’s the nearest thing to a 2012 Gauntlet, but with just a little extra depth. 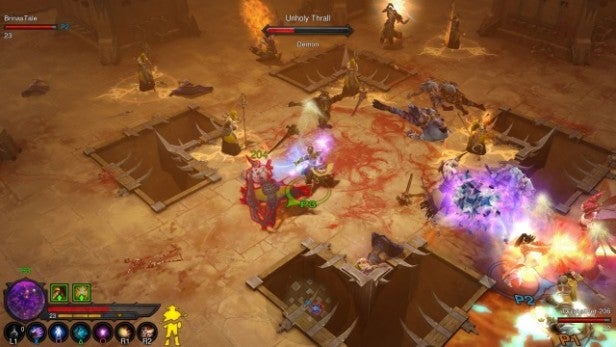 Cleverly, the game allows you to import characters from any console where you have previously exported characters, with a few limitations (no going backwards one generation or PS3 to 360 or 360 to PS3) and a caveat that both consoles must be linked to your blizzard account. We were able to import characters directly from the Xbox 360 version and bring them straight onto the PS4, and it is possible for friends to bring characters from their console for co-op play. Nor is there any need to worry about differing levels. Diablo III’s Apprentice system gives weaker players a temporary boost in stats.

One thing’s for sure: Diablo III has never looked better. Running at 720p, the earlier console versions looked a little muddy and the interface elements weren’t always crisp. Now in full HD on PS4, everything is beautifully sharp and clear. You can see all the sumptuous detail in the environments, and the monsters, the characters, and the game’s dizzying array of light and particle effects practically blast out from your TV screen. Like all Blizzard games, Diablo III is more about the coherent art style than flashy photorealism, but Diablo has a bit more grime and grit than World of Warcraft, and this PS4 version now matches a high high-end PC when it comes to showing that off. 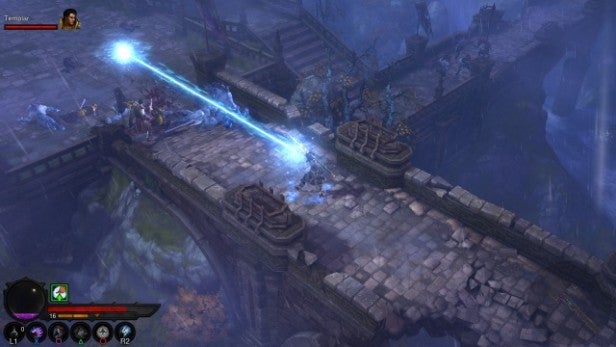 Dungeon crawlers aren’t for everyone, and there’s no question that the unrelenting combat and lack of meaningful non-combat interaction can make for a monotonous experience. Yet Diablo three still does this stuff better than anything else. It’s incredibly rich in detail, equally rich in loot and creatures, and beautifully polished. It leaves wannabes like the Dungeon Siege and Sacred series in the dirt.

The best thing about this ultimate edition, however, is that it’s a huge thudding doorstop of a game. The first four acts that make up Diablo III will take you – at least – a good, long weekend to get through. The fifth act, which makes up Reaper of Souls, extends that one day further.
Once that’s cracked, you unlock adventure mode, where you are free to explore the full map, with randomly generated dungeons, new loot and new opportunities to stretch your by-now demigod -like powers. The game’s difficulty scaling works in well here, ensuring that you’ll still get a challenge, whether you are playing solo or with friends, while the Paragon system ensures that you keep growing more powerful even once you’ve busted through the level cap. It’s a mistake to value games by weight of content, when you combine Diablo III’s extensive running time with the sheer quality of its dungeon crawling, it’s an incredibly good buy.

Verdict
Not just the definitive version of Diablo III, but the best action RPG on next gen consoles – even if the competition isn’t exactly fierce. Diablo III: Reaper of souls – Ultimate Edition is slick, gorgeous and ferociously addictive, even if the minute-to-minute gameplay is one-note. It’s all-absorbing played solo, but virtually unbeatable as a co-op action RPG.