Admirably, From Software has resisted the obvious temptation. Demon Souls begat Dark Souls, but it was Dark Souls that became a phenomenon, albeit a pretty niche phenomenon: an action RPG so uncompromising that it’s become shorthand for a truly hardcore game.

At this point, most developers would have thought about going mainstream, but From Software either doesn’t do mainstream or doesn’t know how. Dark Souls 2 is not a dumbed down Dark Souls or Dark Souls lite. It’s the game Dark Souls fans have been waiting for.

Sure, there are attempts to make the game slightly more accessible. The first half hour contains something that might be considered a tutorial. Bonfires not only act as a kind of checkpoint, but allow fast travel between them. Fail long and miserably enough in one area, and eventually the monsters you kill will not respawn when you meet your inevitable demise. Health items are now distributed more liberally around. 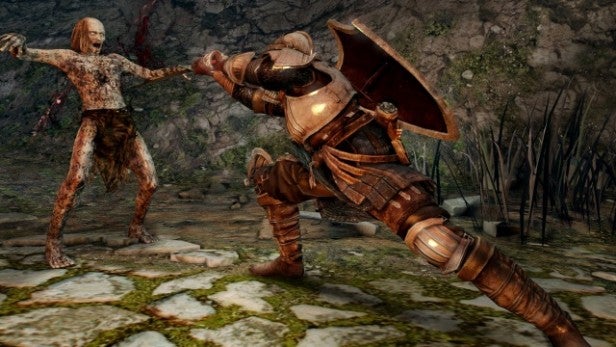 However, Dark Souls 2 remains a game where you’ll die and die often. The storyline is – as ever – sketchy but your wandering adventurer arrives in the land of Drangleic, where they must slay monsters to capture souls that can be traded for levels, and eventually make them whole.

The sting is that, as game protagonists go, you’re relatively weak. A few decent blows are enough to finish you off, while a surprise trap can take you down in an instant.

When you do die, there’s no checkpoint just around the corner where you’ll respawn and continue your progress. You return to life at the last visited bonfire in a slightly weakened, undead state, and have to journey back to find your bloodstain if you want to recapture the souls you had collected.

In fact, Dark Souls 2 makes this even harder, penalising you with a further limit to your maximum health each time you die (though there is a minimum) and encouraging you to use a magic object – the human effigy – to return yourself to a human state. 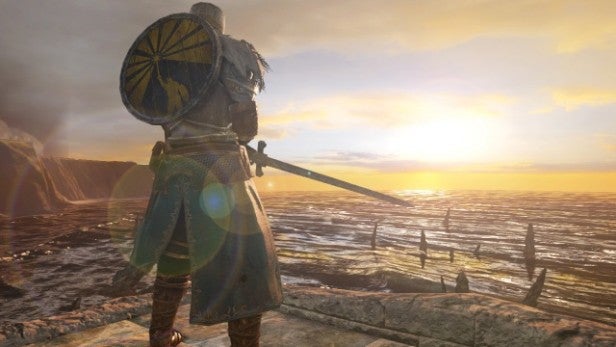 The combat, meanwhile, is just as unforgiving. Dark Souls 2 is all about timing and strategy. It’s about using blocks and rolls to avoid getting hit, about getting in well-timed blows to send your foes reeling, and watching your stamina bar so that you’re not out of puff when you need to strike.

The stats boosts you buy with your souls will help, as will the arms and armour you’ll discover, but when it comes down to it there’s nowhere to hide a lack of skill. Even new dual-wielding classes don’t make it easier, and you have to know your chosen weapon inside out. In Dark Souls 2, a moment’s inattention can be fatal.

In fact, the team at From Software have become virtuosos when it comes to causing human suffering, making every decision a painful balancing of risk and reward. Do you continue probing your way through the current area, or do you head on back to the bonfire, cash in your souls and return for more?

More than once we made the wrong decision, faced the challenge, and ended up as another bloodstain on the floor. Die on the way to reclaim your souls, and they’re gone forever. Bottomless pits, maniac ambushes, rolling boulders, pincer attacks and fatal drops are not just deployed but combined to add to the misery. Throw in weapons that need to be restored at a bonfire before they break, and Dark Souls 2 can leave you crying for all the wrong reasons. 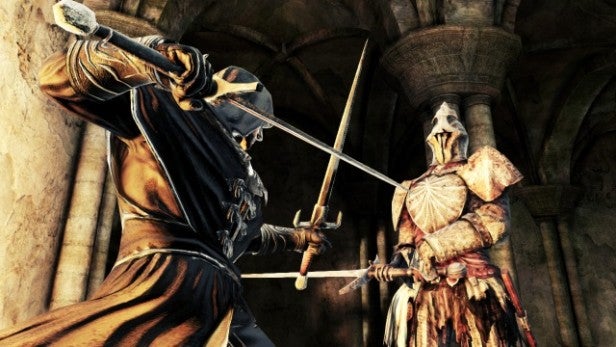 Why then, do so many of us bother? Partly it’s the aesthetic. Dark Souls wasn’t the most technically accomplished or perfectly polished game, and the same goes for its sequel.

For all its majestic crumbling architecture and beautifully designed creatures, you’ll still see crude textures and weirdly clunky animation. The fact that there’s more sunlight in Drangleic than in Demon Souls and Dark Souls combined only highlights the issues. Characters mumble the same phrases ad-nauseum – though the game somehow turns this into part of the fiction – and some of the close-up cinematics are oddly naff.

Yet there’s something single-minded and highly artistic about the whole tone and art direction. The empty palaces and lurking horrors speak of a world of incredible grandeur where something terrible happened long ago.

The few characters you meet can barely stand, seemingly trapped by remorse, shame, disappointment or something worse. You’ll find your way to a high point and find remnants of colossal statues, or a dreaming city half-covered by the tide.

Where other RPGs task you with saving the dying kingdom, Dark Souls 2 has you carrying out the autopsy. It’s a bleak landscape, but fascinating to explore. 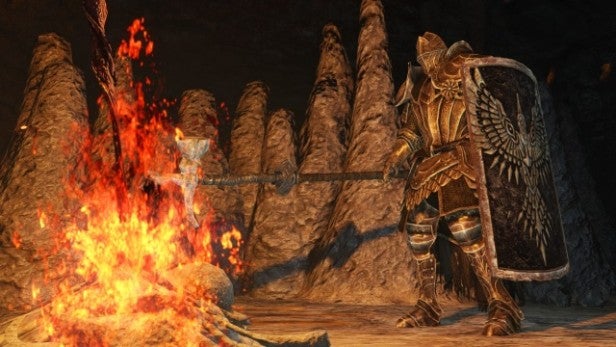 And there are rewards for your persistence. The pay-off for being so challenging is that when you clear a stubborn area and find the next bonfire, or finally put an end to one of the game’s truly fiendish bosses, you feel like you’ve achieved something big.

Check out the forums for the original Dark Souls and they’re almost like support groups, though the advice still comes punctuated by the odd scowling l33t moron calling everybody n00bs. The same community will inevitably embrace Dark Souls 2.

It’s still a solitary experience, of course, but From has ramped up the online features. You can still call in friendly players to help you out with a sticky situation, or leave notes to help your fellow sufferers. You can also invade other players’ games and kill them, and From has now ditched the constrains that stopped this happening to you while undead, or ‘hollow’.

We’ve had little chance to try the online features out pre-launch, but we know that the Covenant system – the nearest Dark Souls gets to an MMO’s Guilds – have been refined to make it easier to summon help.

Recommending or not recommending Dark Souls 2 is a nightmare. Through many hours of play we’ve developed a love-hate relationship with the game, and for many people that’s either going to develop into an intense love-love bond, or an equally intense hate-hate.

Exploring Dragonleic can be one of the most richly atmospheric experiences in gaming, yet it can also be a chore, and while we suspect Dark Souls fans wouldn’t have it any other way, the game’s systems can seem deliberately, bewilderingly opaque. 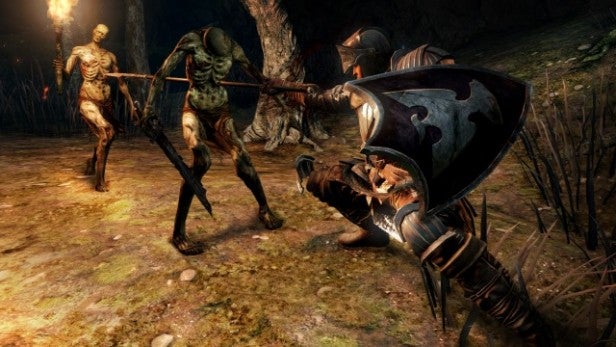 The fatal shots it makes are often cheap, and though death is usually your own stupid fault, that’s scant comfort when you’re working your way through the same ten-minute section for the umpteenth time. Might we dare suggest that it’s all a bit conservative? A little too close to the template already laid down by the two preceding games?

Only you will know if this is the sort of thing that appeals. Be honest. If you’re the type of gamer who likes to be led through a story without too much frustration, then Dark Souls 2 isn’t for you. If you have a shelf full of unfinished games you stopped playing because you couldn’t face that next boss battle, then Dark Souls 2 also isn’t for you.

If, however, you like a game that makes you work for every triumph, and that lets you explore and discover on your own, then they don’t come much better than Dark Souls 2.

While we suspect many hardcore Dark Souls fans might end up preferring the original, it’s a safe bet that they’ll love the sequel too.

Verdict
Dark Souls 2 takes baby steps towards accessibility, but deep down it’s the same bleak, uncompromising game. It’s as brutal as it is beautiful, but it’s hard to think of another series that can drag you so deep into a distinctive fantasy world, or of another series that makes every new area discovered and every battle won feel like such an achievement. You might love Dark Souls 2 or you might hate it, but you won’t be able to forget it.