That’s Dead Cells core concept in three little words. This Castlevania-inspired roguelike charges you with journeying through an ever-changing castle, surviving using only your wits, learned skills and a variety of different weapons and gadgets.

Along the way, you collect Cells. These are gathered by wiping out enemies or liberating them from secret areas in the game world. They can be used to pay for upgrades that persist forever: perhaps there is a special weapon that you want to unlock as a piece of loot in game, or the ability to heal yourself twice with a health potion, or even three times. 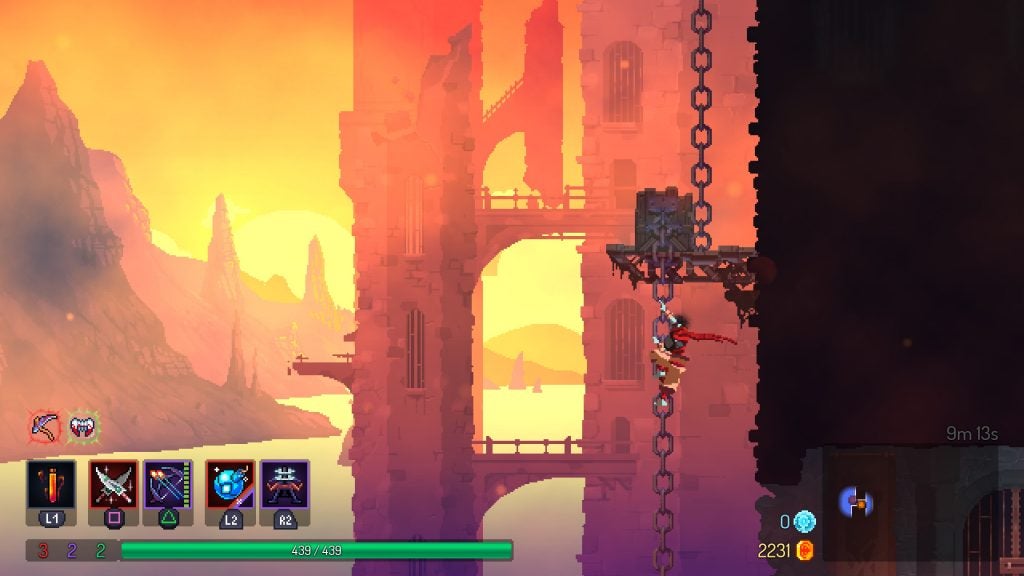 Eventually, you’ll die. There are no checkpoints and you will be unceremoniously dumped back into the starting area, ready to try again. While you lose your money and Cells, your upgrades will persist and you get to try again.

Certain upgrades can let you keep hold of a chunk of your cash, but it’s losing the Cells that really hurts: these can only be spent on the progression-enabling upgrades at the end of each level, so several times during play you could find yourself losing 30 or even 50 Cells after a death. It’s not an exaggeration to say that losing a significant chunk of these is agonising, and provides a strong impetus to perform better next time.

This loop of performance and self-improvement is the chewy meat that holds Dead Cells together, and it’s satisfying enough to carry the entire game on its back. While the levels are procedurally generated, they obey specific rules and by learning them you can start to see the patterns in the generation and use them to your advantage.

To escape from the castle ramparts you need to venture downwards, the mushroom doctor’s room has a hidden passage, and digging into the bottom of the well will often yield goodies. There isn’t always a well, or the mushroom doctor’s room, and they may look different each time, but learning these little bits of information will help you make an impact each time these opportunities rear their head. 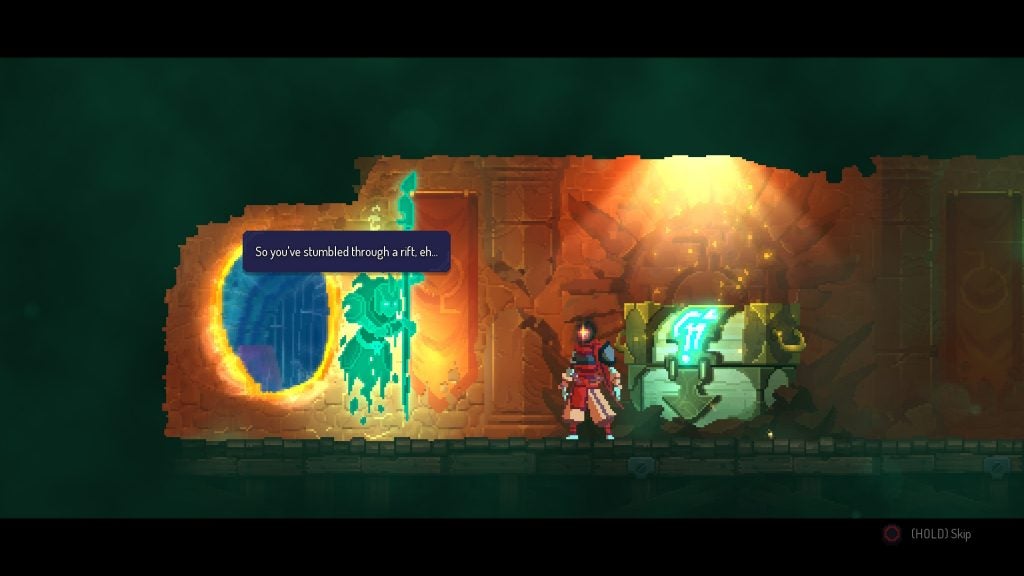 This is true of the enemies too. It’s important to learn each adversaries’ unique attack patterns and behaviours if you want to survive. There’s a remarkable amount of variety throughout the game’s roster of enemies, whether it’s angular scorpions firing venom, mages firing projectiles through walls or even teleporting swordsmen that, after they’ve caught your scent, never stop chasing you.

All of these appear in the first few areas of Dead Cells before you encounter the first major boss, and all of them are immediately challenging until you learn how they work.

You’ll also get to grips with the game’s remarkable arsenal. The weapons — roughly divided into melee, ranged and shields — and power-ups that you can get your hands on are interesting and drop at random, with similarly random traits and rarities.

A gold quality weapon, gold being the highest rarity item, will often come stuffed full of invaluable traits to help you wipe out enemies. Get a couple of these and your run is somewhat charmed, a series of weird particle effects and damage over time attacks chipping away at the swirling mass of enemies around you. 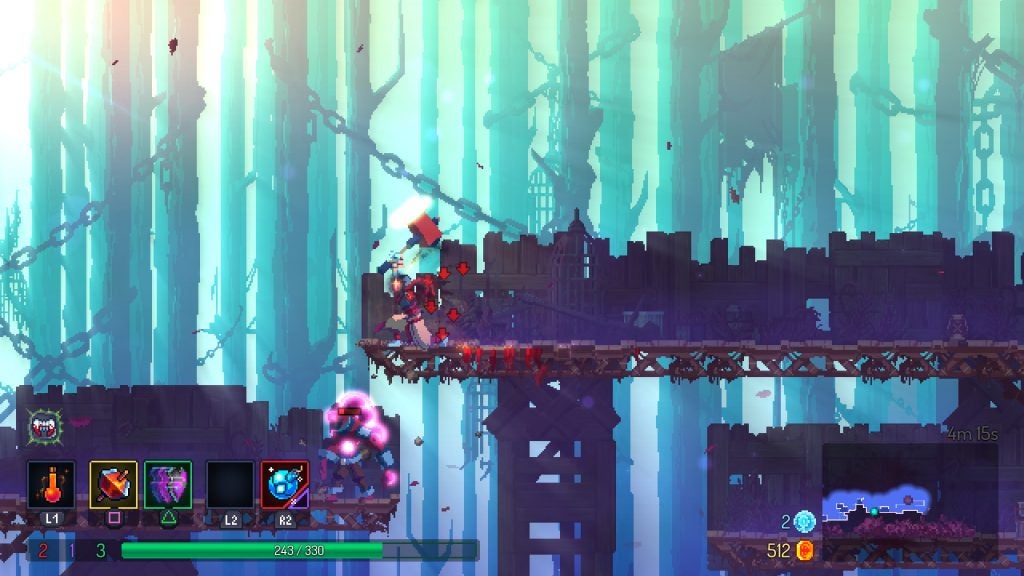 Some of the items feel overpowered, and I initially thought the Ice Bow in the game would redefine any run. Later, I found success with a Hokuto’s Bow: this wondrous thing massively increases the damage that an enemy takes.

Then I got a gold rarity shield that wouldn’t allow me to parry but meant that I took the bare minimum of damage from attacks and reflected 300 percent of any damage blocked while taking a tiny chip of my health. Suddenly, anything I’d marked that attacked me instantly exploded, and two of the games big bosses also fell afoul of it, taking big chunks of damage every time they tried to hurt me.

It’s the combat in the game that keeps me coming back. No other game has quite managed to capture the joy of combat like this. Whether you’re clutching a bow and sword, or hiding away behind a shield and tossing throwing knives, the kinetic energy of the combat makes the unforgiving nature of the game feel like a strength, not a weakness. After learning how the enemies tick, tearing through them is a joy. 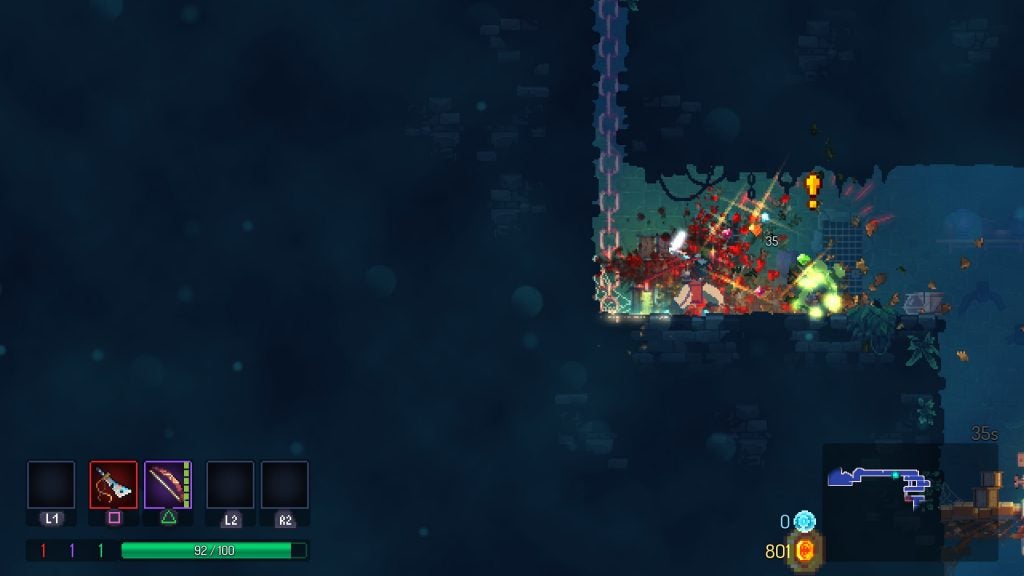 The sound and visuals are excellent too. The movement and attacks look nice but it’s the smaller details that really make it; ride an elevator and sparks come off the walls and chain, fire spreads across the floor, glowing blue if it touches off some oil left on the ground. Get to low health and you’ll leak blood.

There is real care and attention that’s been given, and it’s impossible not to notice. The different levels all have their own distinctive look, and the technical performance is flawless, so even when everyone on the screen is being torn apart, everything looks good and the framerate is stable.

What problems Dead Cells does have is in its progression system. Broadly, while you can succeed at the game with just a couple of the ability-granting runes, getting to many areas requires you to pick up items that will allow you to wall-jump or smash through weak floors below you.

Getting these is poorly signposted, and as these persistent upgrades are key to exploring some of the weirder areas in the game, it is frustrating to bash your head against it repeatedly until you work out where you’re supposed to go, as you fight your way through levels again and again.

This is a shame because the game really does thrive when you explore, with amusing writing and some excellent environmental storytelling. Unfortunately, more casual players will probably be turned away by the sheer amount of work needed to get the final two skill runes, and writing the game off too early because of that.

Dead Cells could be the most surprising success of the year. Coming into the crowded Metroidvania genre was a bold move, but one that seems to have paid off as Dead Cells has delivered the best example of the genre in years. The game is deep and rewards exploration, with exceptional combat and so much content it’s honestly a little intimidating.