Available on PS4 (reviewed), Xbox One and PC

A cynic might view the current micro-trend for upscaling previous-generation games to the Xbox One and PS4 with suspicion – tarting up the visuals of a once-successful game, chucking in all its downloadable content and lobbing it onto a disk seems like a cheap way of maximising assets that would otherwise sit around doing nothing. But it’s impossible to be dismissive of such exercises when they involve games like Dark Souls 2, the RPG that has assumed near-mystical status thanks to masochistic difficulty levels and a vast, epic game-world that drips with mythology and arcana. And with the game’s creator, Hidetaka Miyazaki, feted as the games industry’s man of the moment — following the acclaim for his latest epic Bloodborne — Dark Souls 2: Scholar of the First Sin provides the perfect chance to find out what all the critical fuss is about.

It’s true that Scholar of the First Sin conforms to the upscaling stereotype of higher-resolution visuals and inclusion of DLC, but it’s far from a mere box-ticking exercise. Thanks to the simple device of moving and swapping many of the game’s myriad enemies, it develops a completely different ebb and flow than the original version. Areas where once you may have expected a bit of a breather (admittedly a rarity in a Dark Souls game) might have sprouted, for example, an array of enemies playing dead, who rise and attack when you approach, forcing you to tread a careful path so that you can pick them off one by one. Even some of the game’s more crucial objects now reside in different places. Scholar of the First Sin has been remixed with a loving approach designed to include even those who devoted large chunks of their lives to the PS3 and Xbox 360 original. 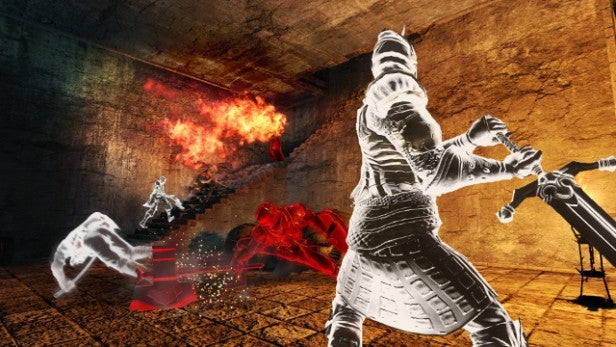 Graphically, it impresses, too – indeed, you could argue that it actually looks better than Bloodborne (its art style, although often stony and forbidding, is less monochrome than that of Bloodborne, thanks to its more diverse environments). The murkiness that characterised Dark Souls 2 on the previous-generation consoles has been banished in favour of a certain crispness that can have knock-on effects as far as gameplay is concerned – it’s now much easier to see what is going on, for example, when traversing dark dungeons without an operational torch. Mind you, it never gives the impression that it’s really stretching the PS4 and Xbox One’s graphics-shifting capabilities, but it looks an awful lot better than it did before.

If you’ve been living in a cave or something like that for the past few years, and are thereby unaware of the general gameplay of the Dark Souls franchise, then it’s easy enough to describe: pleasure through pain. It’s all about getting from one spawn-point bonfire to the next, picking up essential items on the way – a process that involves killing vast amounts of enemies which might be general undead soldiers, knights or often vast but always seemingly impregnable bosses. In the process you will die, repeatedly, although the ability to open up short-cuts stops you from falling into too many die-respawn feedback loops. It’s all about studying how the enemies move, remaining patient and striking in such a way as to exploit their weaknesses. You must take a much less gung-ho approach than in Bloodborne, and defence is as important as attack. 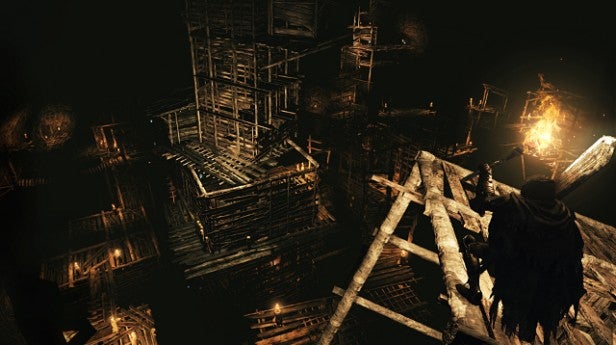 For Dark Souls aficionados, the most attractive aspect of Scholar of the First Sin is the inclusion of three chunks of downloadable content: Crown of the Sunken King, Crown of the Old Iron King and Crown of the Ivory King. In keeping with Dark Souls 2’s exalted status, they aren’t just any old DLC: each opens up a large new area of the world of Drangleic, and possesses a distinctive vibe and personality. Between them, they add many hours of gameplay to what is already an incredibly time-consuming experience.

Of the three, Crown of the Sunken King – the first item of DLC to be released – feels the most like a simple extension of the core game. Although it looks distinctive, as it takes place in a subterranean  environment which feels rather like Egypt’s Valley of the Kings. It does introduce little puzzle-solving elements, such as the need to move lifts up and down to reshape the environment, and to destroy the graves of the Sanctum Knights before you can even contemplate taking them on. Like the other two items of DLC, it’s big on bosses that are extremely taxing. 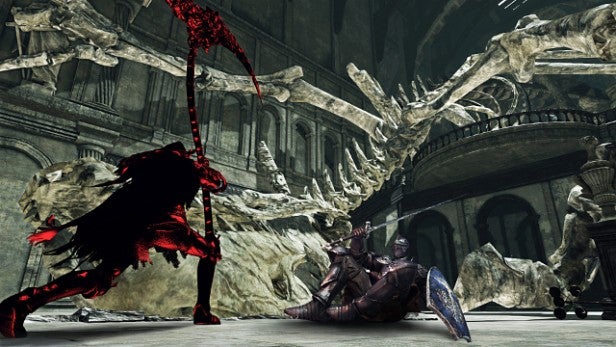 Crown of the Old Iron King centres on Brume Tower, an impressively monolithic place with vast vertical extension. You’ll spend hours running up and down it, pulling switches to fire up ancient machinery and so on. Naturally, it’s studded with traps, and there’s fun to be had with the likes of the zombies that carry barrels of gunpowder, which can be herded around to blow holes in the environment and open up new areas.

Crown of the Ivory King, which takes place in the frozen kingdom of Eleum Loyce, feels like a definitive ending to the game. It throws vast waves of fearsome enemies at you, and following one boss-fight, has an interesting change-up as the ice melts, which brings a whole new batch of previously frozen enemies into play. And the final boss-fight, frankly, is insanely hard.

Verdict
Overall, then, Dark Souls 2: Scholars of the First Sin hangs together beautifully as a single entity: the three items of DLC make perfect sense as integral parts of Drangleic and take what was already a vast and challenging experience to new heights. But we must add a caveat, which is nothing to do with the game’s inherent quality or any perceived lack of it.

Dark Souls 2 isn’t a game for everyone: it really requires you to work hard in order to prosper, a process which may well include false-starts and finding yourself in sequences where you get stuck (particularly before you’ve managed to arrest the Hollowing process, which leaches away your life-bar, no matter how much you level it up). It demands constant concentration, plenty of patience and a willingness to explore and research, since the game steadfastly refuses to extend any hand-holding whatsoever towards you. However, the sheer exhilaration on offer when you overcome it is one of the greatest feelings available in the world of videogames.