What is the Crystal Acoustics Cuby 9?

Cuby 9 is the multiroom-capable version of Cuby 7, a cracking Bluetooth speaker that uses Crystal’s WiSound technology to deliver the same sound quality no matter where you are in the room. The addition of Wi-Fi opens up a whole new box of tricks, including the ability to send music to other Cuby 9s around the house or team them up in a stereo or multichannel configuration.

Wi-Fi isn’t the only upgrade though. Cuby 9 increases the number of drivers from seven to nine, which shoot sound in different directions to achieve what Crystal calls ‘Balanced Speaker Directivity’. Of course, these upgrades come with a hefty premium – £100 to be precise – but if Cuby 9 can combine its sibling’s impressive performance with slick multiroom features then it might be worth the investment. 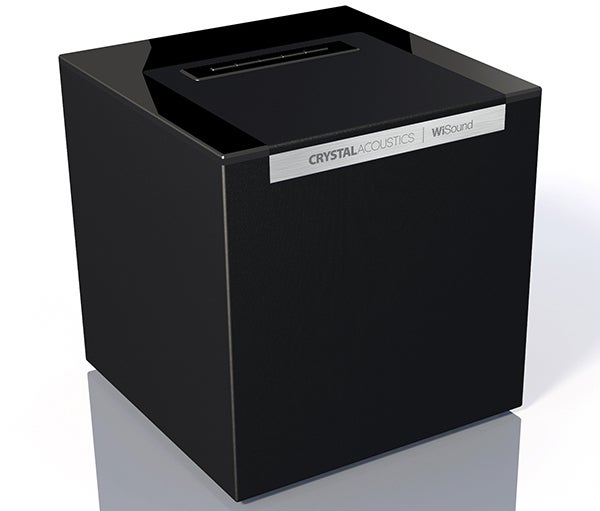 Cuby 9 shares the stunning design and robust build quality of Cuby 7. As the name suggests it’s a cube-shaped speaker with black cloth covering the wood MDF enclosure, and a luxurious lacquered top panel that comes in three interchangeable colours – black, white and red. Our black sample is a real stunner but within minutes it was covered in more fingerprints than a waiting room copy of Woman’s Own.

A section of cloth on top covers four upward-firing drivers, alongside a discreet panel of five buttons for up-close control. They each have two functions, accessed with a long or short press. The ‘long press’ functions are standby, pairing, mute and volume, while the ‘short press’ functions are input, mute, play and track skip. A tiny LED glows blue to indicate when a Bluetooth device is paired. 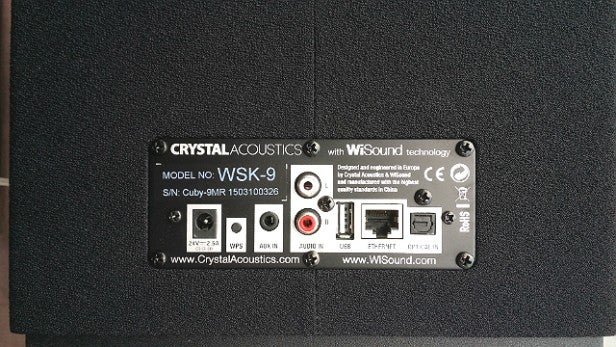 The rear panel’s healthy range of sockets goes beyond the usual wireless speaker offering. There are optical, analogue RCA and 3.5mm minijack inputs, plus a USB port for local playback of music files from storage sticks and an Ethernet port for those who prefer the stability of a LAN connection over built in Wi-Fi. A WPS button offers quick connection to a compatible router.

Cuby 9’s star attraction is WiSound, which uses nine drivers to create a big, room-filling sound, or a ‘spherical response’ as Crystal calls it. There are four upward-facing drivers on top (two ¾in tweeters and two 2in midrange) plus a ¾in tweeter and 2in midrange on each side and a 6.5in woofer on the front face (Cuby 7 lacks the side-firing tweeters). 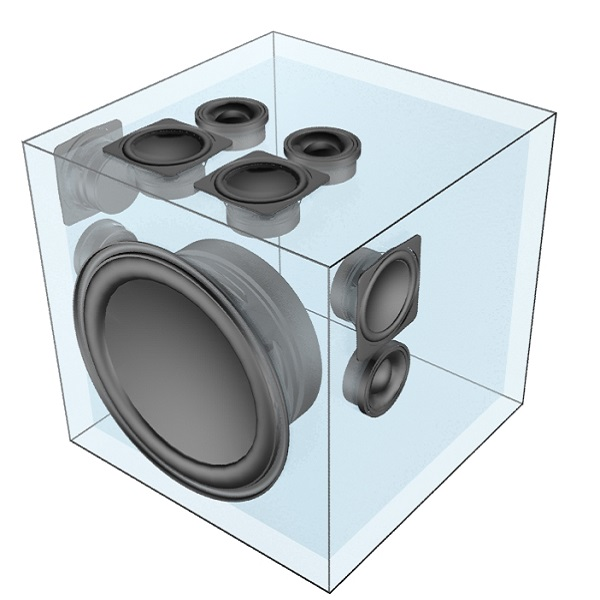 It uses a combination of direct sound – where the drivers fire sound straight at your ears – and reflected sound from walls and ceilings to boost the overall sense of height and immersion. Its other goal is to deliver a consistent tonal balance no matter where you are in the room, eliminating the idea of a sweet spot. 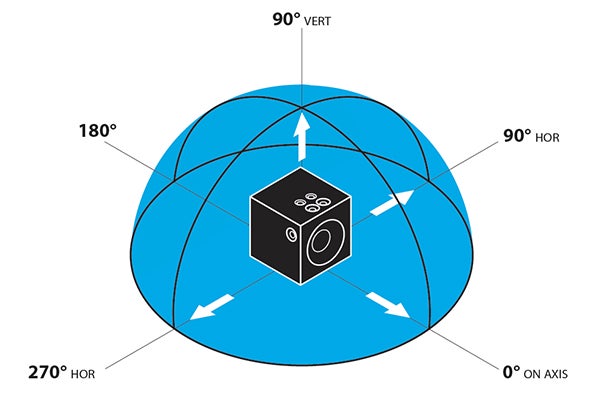 Thanks to Cuby 9’s built in Wi-Fi connection, you can send music to multiple Cuby speakers around the house, whether it’s the same song in every room or different tracks in different rooms. It’s all conducted by Crystal Acoustics’ WiSound app for iOS and Android.

You can pull music from a variety of places including DLNA/UPnP devices (PCs, servers, NAS drives), iOS devices with AirPlay and online streaming services such as Spotify Connect, TIDAL, Deezer, Pandora and TuneIn Radio. Pandora and TuneIn are the only two that can be accessed directly through the WiSound app (although obviously you can’t get Pandora in the UK).

Cuby 9 isn’t all about Wi-Fi though – there’s built-in Bluetooth too, with apt-X support for CD-quality playback from compatible sources, plus you can play music from USB storage devices. But the beauty is that unlike some multiroom speakers Cuby 9 can retransmit music from Bluetooth or USB and send it to other Cuby speakers in your ecosystem.

Thanks to WiSound, placement shouldn’t be an issue as it’s designed to sound the same in any position, although we’d recommend placing it no lower than waist height.

Wi-Fi setup is equally hassle-free. To connect it to your router, simply run the WiSound app, key in your Wi-Fi password and press the WPS button on the back of Cuby 9. A male voice confirms the connection and the app searches for available devices, which can then be renamed if you wish. The app’s onscreen instructions make the process very easy indeed. If you don’t have a router, you can connect your device directly to the Cuby 9’s own Wi-Fi network. 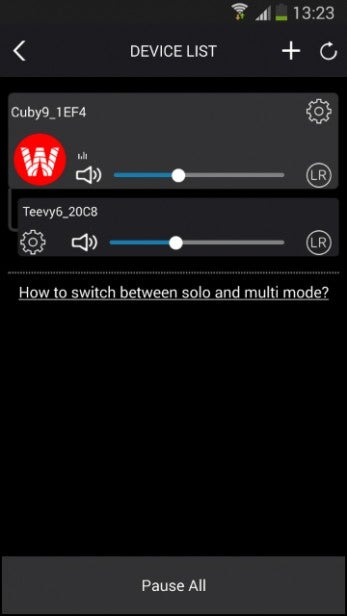 The impressive WiSound app is attractive and flexible. The Device List provides an overview of all your connected speakers, each one displayed in a box with cover art, a volume slider and an icon indicating whether the speaker is playing in stereo or as the left/right channel in a stereo pair.

To play the same thing through two (or more) speakers, grab the desired speaker and drop it onto another – the speaker you’ve dropped it onto becomes the master and the others are slaves. A male voice helpfully tells you that you’ve switched from ‘Solo’ to ‘Multi’ mode. If you have more than two speakers you can create multiple groups by dragging and dropping other speakers onto each other. 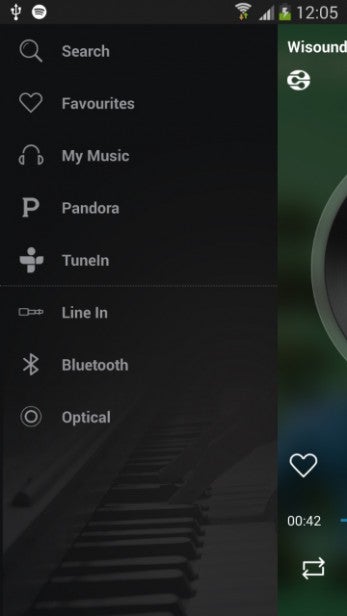 To select a music source, swipe to the right and choose one from the menu on the left. Spotify is notable by its absence though – to access it you have to visit the full Spotify app and stream to Cuby 9 using Spotify Connect. When you return to the WiSound app, the Spotify cover art is displayed on the Now Playing screen. It’s not a major hassle, but incorporating it into the WiSound app would have been more convenient. There’s also a playlist screen and a Now Playing screen, both of which are smartly laid out and intuitive to use. 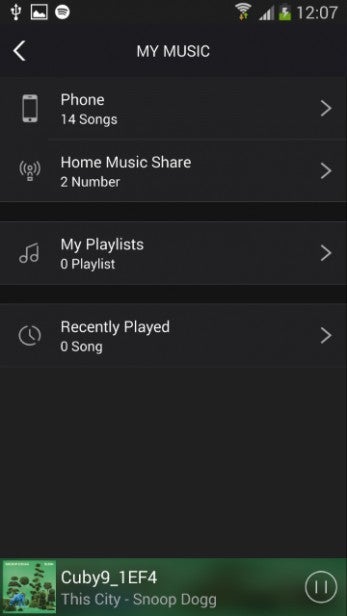 The app also includes a search tool that finds music by keyword, but weirdly it ignored our own servers and pulled up a load of tracks not in our collection. We later learned that these tracks come from TTPod, a free cross-platform music streaming service from China that’s like a subscription-free version of Spotify Premium. Any music streamed from its vast database can be added to one of the app’s six presets for easy access.

At present, when you use the search tool it only displays music from TTPod, but Crystal Acoustics is working on a ‘more unified’ version of the search tool that shows results from local content as well as TTPod – an on/off button will allow you to select local or TTPod results.

Away from the app, general operation is easy – the top buttons are firm and responsive and there’s also a remote in the box, which is far superior to the one supplied with Cuby 7. It’s unusual for a multiroom speaker to come with a physical remote, but it’s much quicker than firing up the app every time.

The multiroom functionality is remarkably simple to use and works without a hitch. Crystal Acoustics sent us a Cuby 9 and the Teevy 6 MR soundbase (the multiroom version of Teevy 6, review coming soon) and after grouping them together both units played our music perfectly in sync via Wi-Fi, Bluetooth and USB. We were able to adjust the volume of each speaker, flip the left and right channels or pause all speakers without any blips.

In terms of sound quality, Cuby 9 serves up much the same as Cuby 7 – namely a big, immersive sound that doesn’t change as you move around the room, all thanks to the wonders of WiSound.

With Cuby 9 placed in the middle of a reasonably large living room, we hit play and took a stroll around. Levels of bass and treble didn’t suffer any dip in depth or clarity, resulting in a crisp and full bodied sound from any position.

It’s also roomy and expansive. With the drivers spraying sound in different directions, it makes you feel immersed in the music more effectively than traditional speakers.

Of course, consistent sound quality would count for nothing if that sound quality was bad to begin with, but thankfully that’s not the case. Cuby 9 delivers an even tonal balance, with glittering detail, weighty bass and a clear midrange. We criticised the Cuby 7 for its slightly overzealous treble but for whatever reason the balance seems better here.

You can even turn it up nice and loud without fear of distortion. There’s a biting edge to snare drum hits and bass is well integrated.

It’s capable of some big, exciting dynamics when the music demands, but with gentler genres like jazz or classical there’s just enough finesse and subtlety to do them justice.

Cuby 9’s inherently expansive sound does mean that musical elements aren’t placed with a great sense of precision or staging, which can seem a touch disorganised and chaotic with certain pieces of music – but that’s the trade off you make for WiSound’s positional flexibility.

A bigger thorn in the Cuby 9’s side is Samsung’s new multiroom speaker, the WAM7500 (R7). Like the Cuby it’s designed to sound the same from anywhere in the room using innovative 360º technology, but does so with slightly better poise and cohesion.

The R7 is also better looking and its smartphone app is much nicer to use, but on the flip side it costs a good £150 more than Cuby 9 and doesn’t retransmit Bluetooth. 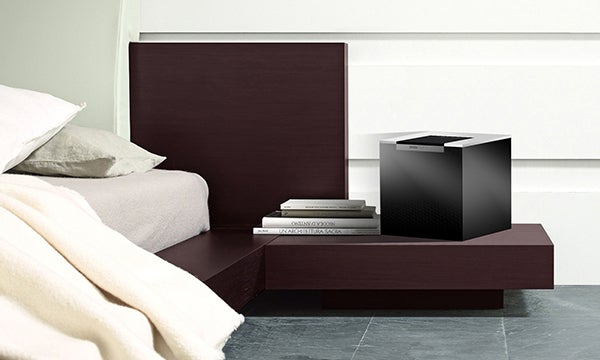 Should I buy the Crystal Acoustics Cuby 9?

Cuby 9 is an impressive speaker that builds on the sterling work of its seven-driver sibling with slick multiroom functionality. There may be better sounding multiroom speakers on the market like the Clint Odin and Raumfeld Stereo Cubes, but Cuby 9 makes up for it with superior features and ease of use.

It carries out its network duties with ease and flexibility, allowing you to zap music to different speakers at the swipe of a finger using the superb smartphone app. The ability to direct Bluetooth and USB music to other speakers is a useful talent, and there’s an unusually generous range of sockets on the back for non-networked gear.

In terms of performance WiSound lives up to Crystal Acoustics’ claims, delivering a balanced, full-bodied sound from any listening position. We think the Samsung R7 is a better ‘omnidirectional’ speaker overall, but if your budget can’t stretch that far then the Cuby 9 is a fine choice.