What is the Crystal Acoustics Teevy 6?

The Teevy 6 soundbase comes from the same family of Reference Wireless Series products as the Cuby 7 Bluetooth speaker, which wowed us with its classy design and room-filling WiSound technology. The same system is at the heart of Teevy 6, which uses six precisely-balanced drivers and the acoustic properties of your room to deliver a big, immersive sound for everyone in the room – all from a single box under your telly. 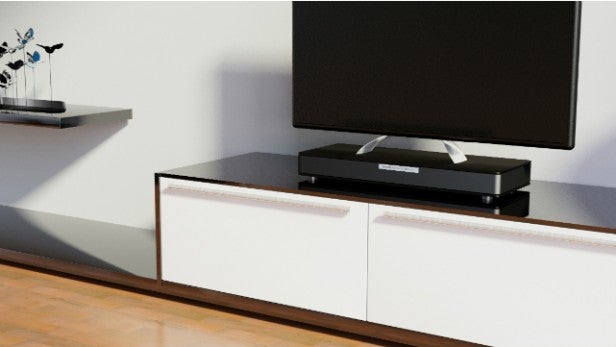 Soundbases are rarely works of art and Teevy 6 is no exception, but at least Crystal Acoustics has made a bit of an effort with some glimpses of silver on the feet and name plate on the front. The curved corners inject a little elegance too, and at 95mm high it’s not as chunky or imposing as some soundbases.

A black cloth runs along the front and sides, covering up those all-important WiSound drivers. A single LED on the front provides your only indication of the unit’s status – it glows red, blue, white or green depending on which input is selected, and blinks when receiving a command. There are no buttons on the unit itself, so you’re at the mercy of the remote.

More importantly, its build quality is terrific. The robust MDF bodywork and hard-wearing matte black top surface provides a strong, sturdy base for our 55-inch Samsung LED TV, the stand of which fits perfectly within the top surface. Your TV should weight no more than 60kg and its base should not exceed 780mm wide by 280mm deep. 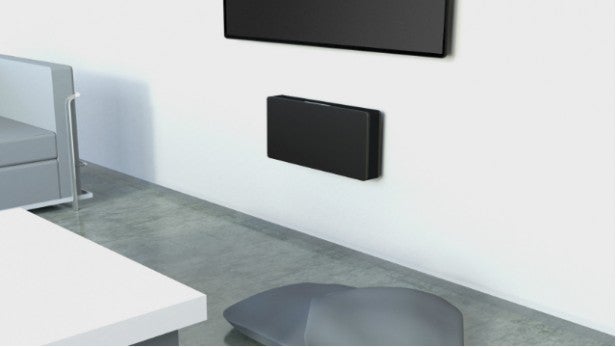 If your TV’s too big for it, you could slide it into an AV rack below or mount it on the wall, using the holes on the underside to hang it on screws. 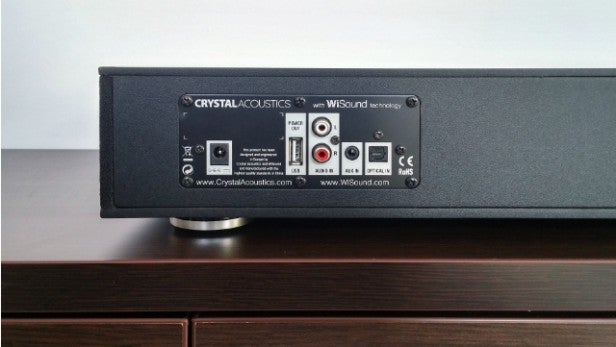 The connections are found on the back and include optical, analogue stereo and 3.5mm minijack inputs, alongside a USB port that lets you charge your devices but sadly doesn’t let you play music from pen drives.

There are no HDMI inputs at all, which is likely to frustrate those hoping to channel their Blu-ray players or games consoles through the system. As a result your best bet is to connect your Blu-ray deck and other kit to your TV’s HDMI inputs and hook up your TV to the Teevy’ optical input – that way it’ll play whatever you’re watching.

The minijack input is useful for portable devices but would have been more convenient on the front. Bluetooth is also on board and like the Cuby 7, a Wi-Fi/multiroom version is in the pipeline.

Teevy 6’s key feature is WiSound, dreamed up by Crystal Acoustics and boffins at the University of Patras in Greece, which claims to deliver the same sound quality no matter where you are in the room. It’s a solution to the problem posed by conventional speakers known as the ‘sweet spot’ – the acoustic phenomenon where you only get the optimal sound from a particular position in the room. 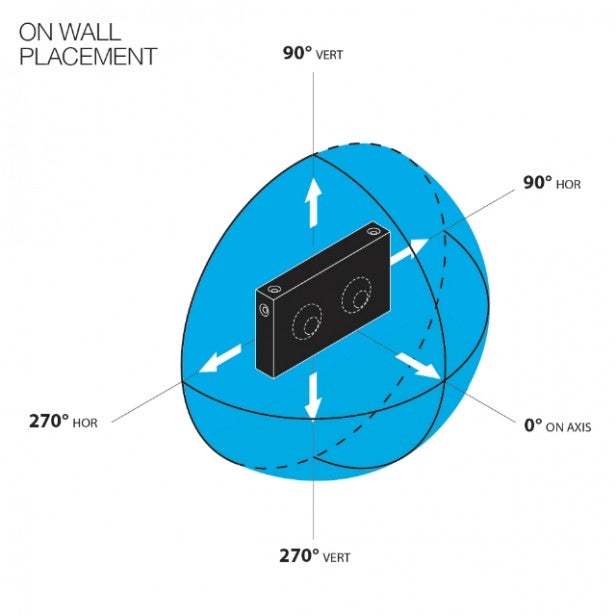 It combats this using six drivers facing sideways, forwards and downwards, which shoot sound into the room while a DSP uses reflections from the walls to enhance the sound further. This immersive ‘spherical’ soundstage offers a consistent tonal balance from any listening position. 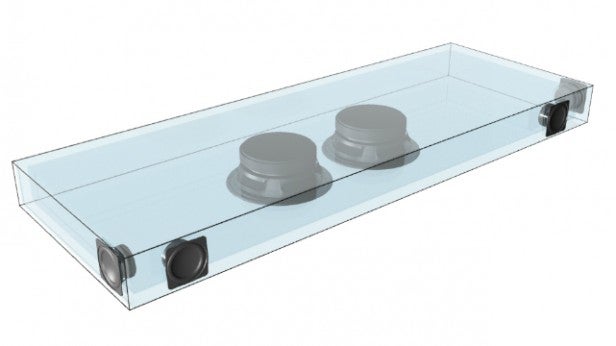 Teevy 6 is controlled using the same remote as the Cuby 7, which is bad news. It’s a small and awkward little zapper with fiddly blister buttons, but luckily there aren’t many controls to get your head around.

Although primarily a music player, we praised the Cuby 7 for its ability to fill a room when playing TV shows and movies. So it comes as no great surprise to find Teevy 6 is similarly adept at turning movie playback into a powerful and involving experience – although WiSound doesn’t work quite as well this time, given the constraints of the cabinet and the lack of upward-firing drivers when placed under a TV.

Dumb it may be, but Pacific Rim on Blu-ray is a brilliant test for any soundbase with its colossal fight scenes and thumping soundtrack. We ran it through the Teevy 6 and it brings the action to life with lively, dynamic effects, like the clang of metal hitting metal or the hiss of ocean waves, while heavy dollops of bass underpin every explosion and stomping footstep. 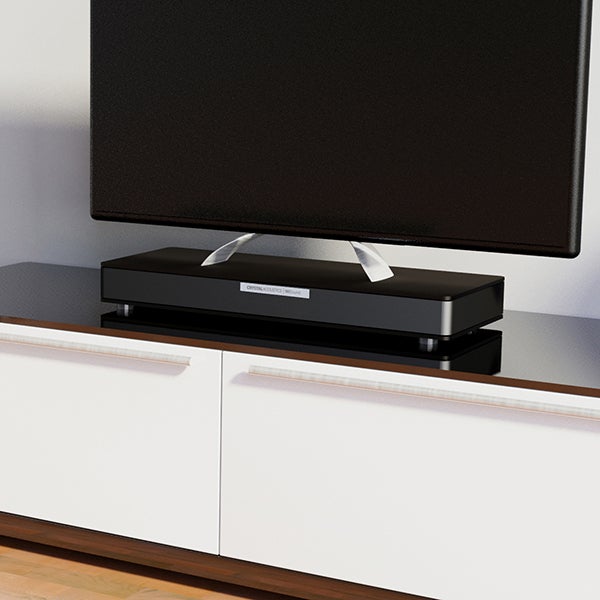 Punchy bass fuses tightly with the midrange, resulting in a quick, lag-free sound – demonstrated by uptempo music and rhythmic effects like gunfire. You feel every boom and bang during the epic Kaiju/Jaeger battles viscerally.

At loud volumes Teevy 6 smoothes the edge off potentially fatiguing harshness, resulting in a sound that’s easy on the ear but with enough bite to keep things exciting.

Despite the lack of dedicated tweeters, the sound is crisp and detailed. You can hear small details like sibilance and smacking lips when characters speak and delicate background noises during quiet scenes. It lacks the top-end sparkle and finesse you get from some bases but there’s more than enough top-end clarity to satisfy. 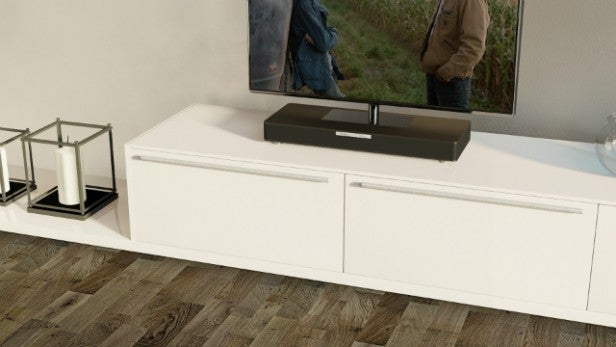 Doing the “walk around the room” test while the movie plays, Teevy 6 lives up to its promise of a consistent tone from most listening positions. We didn’t notice much change in treble crispness, midrange bite or bass solidity. WiSound delivers a room-filling sound too, but unlike the Cuby 7 this seems to have more to do with loudness than clever acoustic jiggery pokery – there’s no sense of height, for example, and we didn’t feel as enveloped this time round.

And for a speaker that places so much emphasis on a room-filling sound, its greatest asset is perhaps dialogue reproduction. Voices are remarkably clear, forthright and detailed.

We switched to The Babadook on Sky HD and Teevy 6 lends decent bass weight to the rumbling effects when the ghoul approaches. There’s an eerie, unsettling clarity to the creepy effects – every creak and whisper is clear as day, which helps maintain the tension.

Teevy 6 is just as impressive with TV shows. Even innocuous stuff like Pointless on BBC One is turned into a powerful listening experience, with easy-to-hear dialogue, spacious audience applause and a beefy thump when the column hits its mark. It’s an ideal boost in cavernous living rooms where regular TV speakers struggle to make themselves heard. It makes a decent music player too, making the most of the crisp treble and well-integrated bass.

Should I buy the Crystal Acoustics Teevy 6?

Overall, Teevy 6 is a hugely impressive soundbase. Its tasteful design and solid build quality are commensurate with the price, and it brings effortless excitement to movies and TV shows with its punchy bass, excellent detail and attacking tone.

Although WiSound doesn’t make quite the same impact as it does on the Crystal Acoustics Cuby 7, Teevy 6’s output is powerful enough to fill a large living room and it offers a consistent tone from any angle. The lack of HDMI sockets is a little disappointing and the remote is naff, but otherwise Teevy 6 deserves a place on your shopping list.

WiSound doesn’t wow us like it did on the Cuby 7, but Teevy 6 still offers the sort of power, scale and width your TV can only dream of. The lack of HDMI ports is a shame for the money, though.