Crusader Kings 3 is a fantastic entry in Paradox’s historically-rooted strategy series. New RPG elements help to create a more engrossing character-driven experience, while lots of quality-of-life improvements make it more accessible and digestible to both Crusader Kings veterans and newcomers. There are still a couple of issues, such as inconsistent AI-controlled allied armies, but this is still nonetheless one of the absolute best strategy games you can currently buy.

I’ve played as many types of rulers during my time with Crusader Kings 3, including a battle-savvy Irish King who conquered Iceland, and a charismatic Welsh lord who was secretly assassinating toddlers for a claim on the throne.

Being able to insert yourself into history and meddle with the established timeline is just as fun as Dr Who implies, but the most enjoyable aspect of Paradox’s strategy series is following the create-your-own-adventure story of each ruler and engaging in your own schemes and plots that even George R R Martin would marvel. 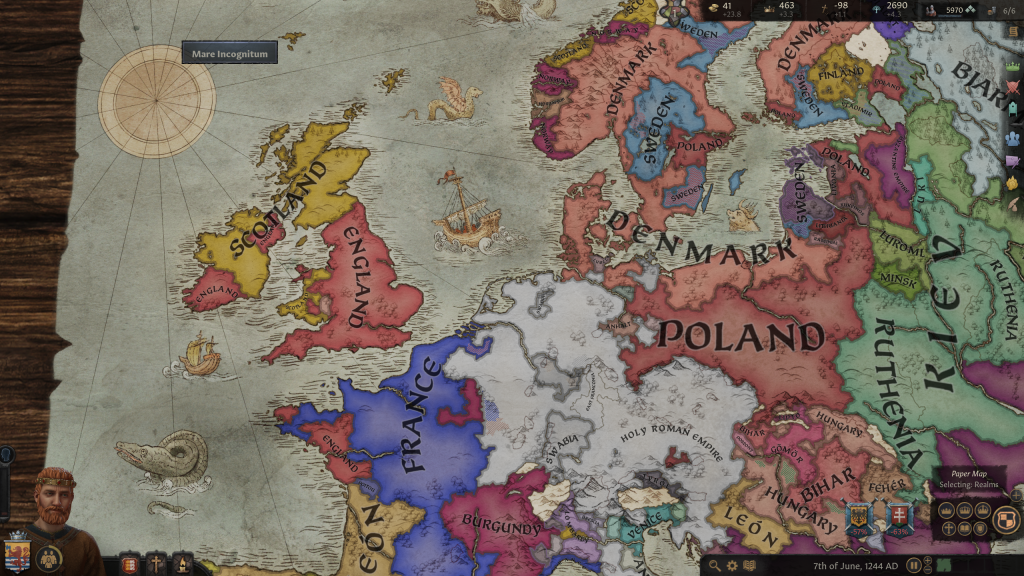 The new Crusader Kings 3 focuses on these strengths by providing a significantly more character-driven experience than previous entries. Paradox achieves this in numerous ways, including the new RPG-esque skill trees that provide a sense of progression and increase the scope for more varied character builds. Two different rulers both focusing on diplomacy may now have incredibly varied skill sets, avoiding the risk of repetitive playthroughs.

Character traits also feel more influential, which is largely thanks to the new Stress feature. Taking actions that conflict with your ruler’s personality traits will fill up a portion of your stress bar. For instance, a character with the ‘Sadistic’ trait may want to torture a prisoner rather than set them free, while a ruler who has the ‘Just’ trait will feel pangs of guilt when scheming an assassination. Fill this stress bar up too much, and your character could suffer an untimely death. This feature initially felt restrictive, but I always had more fun with Crusader Kings when I fully embraced the role-play aspect rather than trying to mould my ideal, perfect ruler. In Crusader Kings 2 I often fell into the trap of building numerous characters that excelled at stewardship, inadvertently making each king, queen, lord and vassal I played feel unremarkably similar.

In Crusader Kings 3, the stress bar encouraged me to create more varied characters, such as blood-thirsty warlords, persuasive negotiators and sadistic monsters that make Ramsay Bolton look like a saint. You do get a bit of leeway with the stress bar, so I could always contradict my traits if I felt the reward outweighed the consequences. Plus, it’s not the end of the world if you do end up dying prematurely, as you’ll just assume control of your heir instead.

Game developer Paradox is now more stringent with the number of traits your character can acquire. In Crusader Kings 2, I’ve been able to amass close to a dozen traits before popping my clogs, enabling lots and lots of different story-centric opportunities, but also turning my character’s personality into a convoluted, jumbled mess. In the latest entry to the series, rulers will usually only have three or four traits, resulting in a more defined and focused character that’s much easier to role play as. To encourage even more variety of playstyles, Paradox has introduced a slew of new game mechanics so you’re not relying solely on combat and assassinations to take over land. The new hook system is one of my personal favourites, enabling you to blackmail other characters if you’ve discovered one of their scandalous secrets. When my spymaster found out the Scottish king was secretly an illegitimate child and so had no real claim to his throne, I was able to force him into agreeing to the marriage of my son and his daughter, thus giving my heir a claim to the Scottish kingdom.

Meanwhile, the new feudal contracts place more importance into the Diplomacy attribute, as you can negotiate with your vassals for heavier taxes and larger levies. Vassals can also be blackmailed into agreeing more generous terms, which is an excellent showcase of how many of Paradox’s new features and systems successfully interweave. 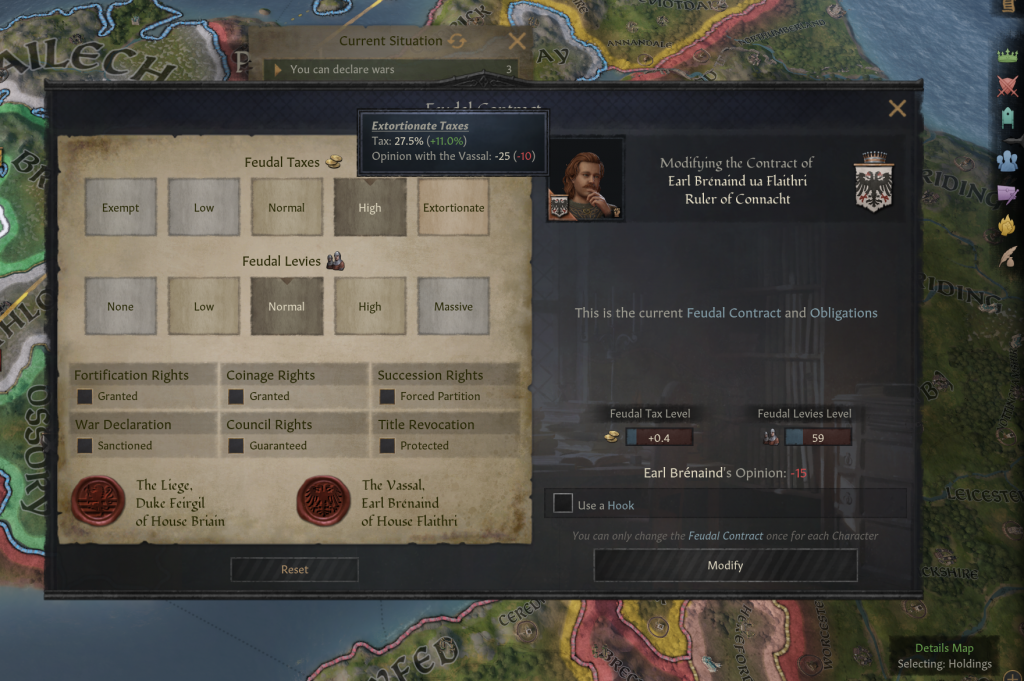 To really immerse you into your character’s story, Paradox has created 3D models for every character generated in the game. Such a feature may initially seem like a superficial improvement, but it helped to create a fleshed-out story in my head, especially since physical traits such as scars, fat and smallpox are clearly presented on the character’s avatar. Plus, plotting an assassination felt even more wicked when I had to look into the eyes of my target.

The 3D character models make Crusader Kings appear less spreadsheet-focused, and therefore less daunting to newcomers. At first glance, previous Crusader Kings games have looked like over-serious strategy series that will only appeal to history nerds. This is of course not the case, and so Paradox has made a big effort to make it look a lot more appealing.

The map looks gorgeous with oodles of detail, while the interface is far more user friendly. Icons have increased in size and are now colour coded, while hovering over certain keywords will pull a pop-up explanation from the encyclopaedia. This is even useful for Crusader Kings veterans, as remembering the implications of every trait is no easy task.

I have found a few technical issues here though, as certain pop-up windows will disappear when you try to move your cursor over them, which can become very frustrating. I’ve also seen characters incorrectly labelled as infertile, and enemy troops wrongly colour-coded as being ‘neutral’, although I’m sure such bugs can be fixed in future updates. 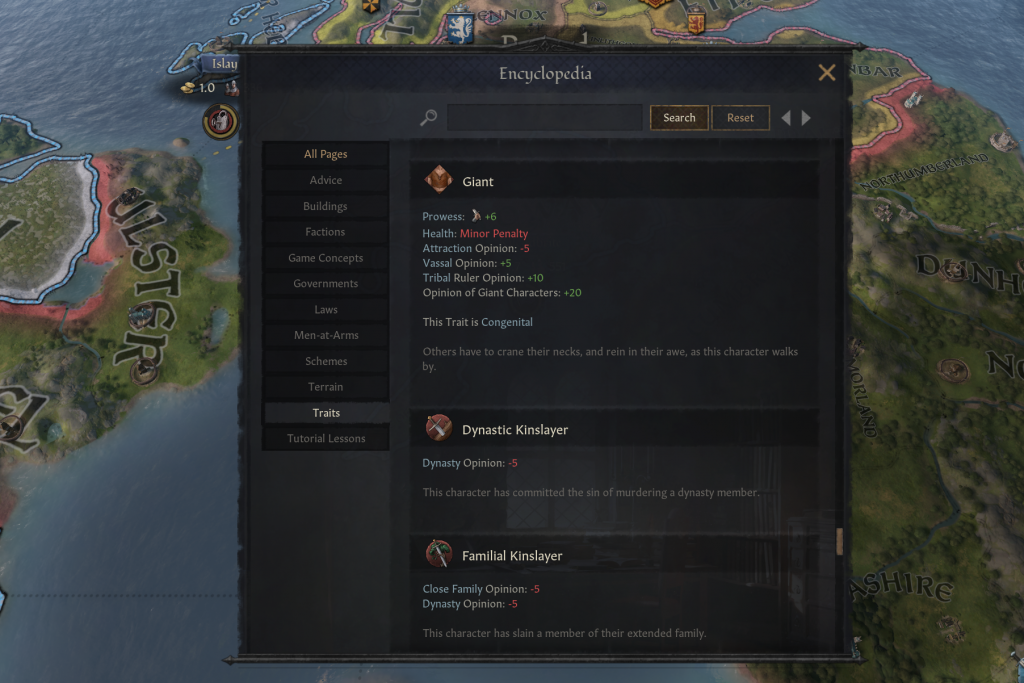 Paradox has added plenty more quality-of-life improvements to make menu navigation substantially more user friendly. New filters also help to narrow down the search for a spouse, whether you’re looking for powerful alliance or a hereditary gene that will give your future offspring a boosted chance of becoming a genius.

Raising your troops will now see your army spawn in one allocated rally point rather than sprouting up across your entire kingdom. Having to herd all of your soldiers into one huge army was a logistical nightmare in previous Crusader Kings games, so I really appreciate this tweak.

There have been quite a few improvements to combat, as the size of your army is no longer the only important deciding factor of a battle. The quality of knights plays a significant part now, forcing you to entice characters with particularly high prowess skills into your court. However, the likelihood of a knight dying in battle seems to be very high, and so giving your children or vassals such titles can prove a devastating risk. 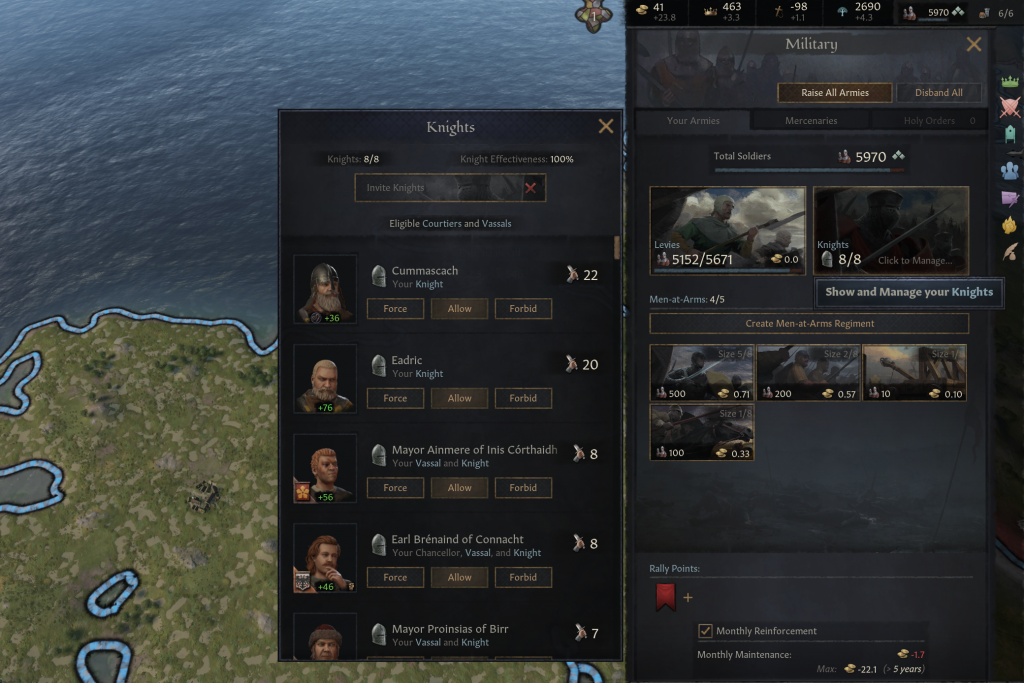 I’ve also noticed that successful sieges have a high chance of abducting characters from court. This adds more tactical spice to warfare, as you’ll want to protect your capital at all cost to prevent your heir ending up in an enemy holding cell.

Combat is still the weakest aspect of Crusader Kings, lacking the tactical depth of other strategy titles. The biggest issue of all is the AI for allied armies, which is frustratingly inconsistent. Sometimes allied troops will aimlessly wander your land, leaving your own army at a significant disadvantage. It would make a lot more sense if alliances would instead lend armies for you to control, as the current setup makes reliance on allied countries an extremely risky tactic despite all the hard work involved in setting the alliance up in the first place.

Still, while Paradox may not have addressed every flaw, Crusader Kings 3 is still a major step forward for the series. An onslaught of DLC is expected to follow, as with any Paradox game, but Crusader Kings 3 already feels like a complete experience that’s comfortably capable of occupying you for dozens of hours at a time.

Crusader Kings 3 is a fantastic new entry to the history-rooted strategy series, putting a larger emphasis on character-driven narratives and opening up more entertaining opportunities for increasing the size of your kingdom.

Technical issues and unreliable AI-controlled allied troops prevent Crusader Kings 3 from a perfect score, but this is undoubtedly the best entry to the series yet and will only likely get better with the guaranteed expansions.